In real – or even unreal – terms, new cars have never been cheaper

WHILE proposed grey import laws have been canned, it turns out we’re already getting better value than ever.

While the prices of just about everything have been constantly on the rise, many cars are still frozen at levels of 20 years ago.

In short, as we tell each other constantly, Australia is bloody expensive these days, except for cars, which are absolute bargains.

For that you’ll also get 42kW and 80Nm more to play with and too many safety (a driver’s airbag was optional at launch) and entertainment features to mention.

At the volume end of the market, the cheapest Toyota Corolla you could buy in 1995 was a five-speed manual hatch for $22,870, while the comparative model today, with much more standard equipment and six speeds, is just $19,490.

So how is this economic miracle achieved, and are cars really the only things that have defied market forces on price?

CommSec chief economist Craig James says that, while it certainly feels like everything has gone up, there are other exceptions.

“The [Australian Bureau of Statistics] stats tell us that clothing, footwear, small electrical items, computers and TVs are also cheaper now than they were 20 years ago,” James says.

“What the data doesn’t do is a ‘quality adjustment’. When the ABS talks about the price of a good, or a car, bought 20 years ago, it doesn’t measure whether it was the same quality, or had the same features.

“If you look at the features of a modern car, and the safety, you’re getting even greater value than the figures suggest, whereas a kettle back then was similar to one now,” he says.

“Car companies have managed this through the increasing efficiencies of the production approach, their production practices, like robotisation, and advances in technology.”

James says if you widen the statistical net to take into account the growth in wages, and our spending power, the car/price equation looks even better.

“If you look at the number of weeks it would take a person on average wage to buy a car, the rate of affordability rather than the dollar-for-dollar comparison, then it’s clear that cars are more affordable now than they’ve been since the 1970s,” he says. 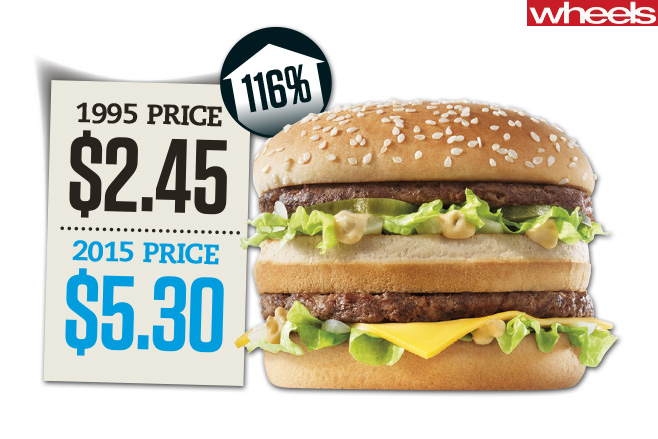 Many economists use the ‘Big Mac Index’ to compare buying power around the world, based on the burger’s price, which has more than doubled since 1995. New car prices in Australia, however, have remained steady .

It would have taken someone on the average wage 40 weeks to buy a Camry in 1997; today it would take just 17 weeks.

Toyota Australia sales and marketing director Tony Cramb points out that you need to factor in economies of scale.

“Toyota is producing more vehicles than ever before - we now build and sell 10 million vehicles a year, a 35 per cent increase compared with 2005,” he says.

Tariff reductions have also made a big difference to the price of imported vehicles.

“In the early 1980s, the import duty here was close to 60 per cent, which had a significant impact on prices,” Cramb says. “Policy changes led to progressive reductions. The signing of [free trade agreements] with countries like Thailand, Japan and the US has eliminated the remaining duty on vehicles from those nations.”

Subaru spokesman David Rowley says the price restraint his company has exercised on the WRX over the years was made possible by a combination of factors, and has helped its sales enormously.

“The FTA makes a big difference and exchange rates can help, but over time they do undulate, so you can’t put it all down to that,” Rowley says.

“The other thing in our case, which isn’t economic, is the relationship with the factory, Fuji Heavy Industries, which is vital in getting the best price we can.

“In global sales terms, it’s Japan, the US and then us, so we are a big market for them, and that’s something they take into account; the sheer volume we’re selling here.”

Prices are also driven down by competition, Cramb points out, with total sales of just 1.1 million a year in Australia being scrapped over by more than 60 carmakers, a higher number of brands than you’ll find in the US or Europe, and a choice of more than 400 models.

And yet the government argues, over the screams of protest from the car industry, that consumers need even more choice, and even cheaper cars.