With only the whir of electric motors and tyre noise audible, it scoots from standstill to 100km/h in under seven seconds and has a top speed of 185km/h. No, it’s not as quick as its petrol-slurping turbocharged brother, but that’s not the point.

The MiEV may look like a standard Evo with a WRC-spec wing and 20-inch BBS rims, but pop the bonnet or peek behind those wheels and you’ll soon realise that this is a very different beast. 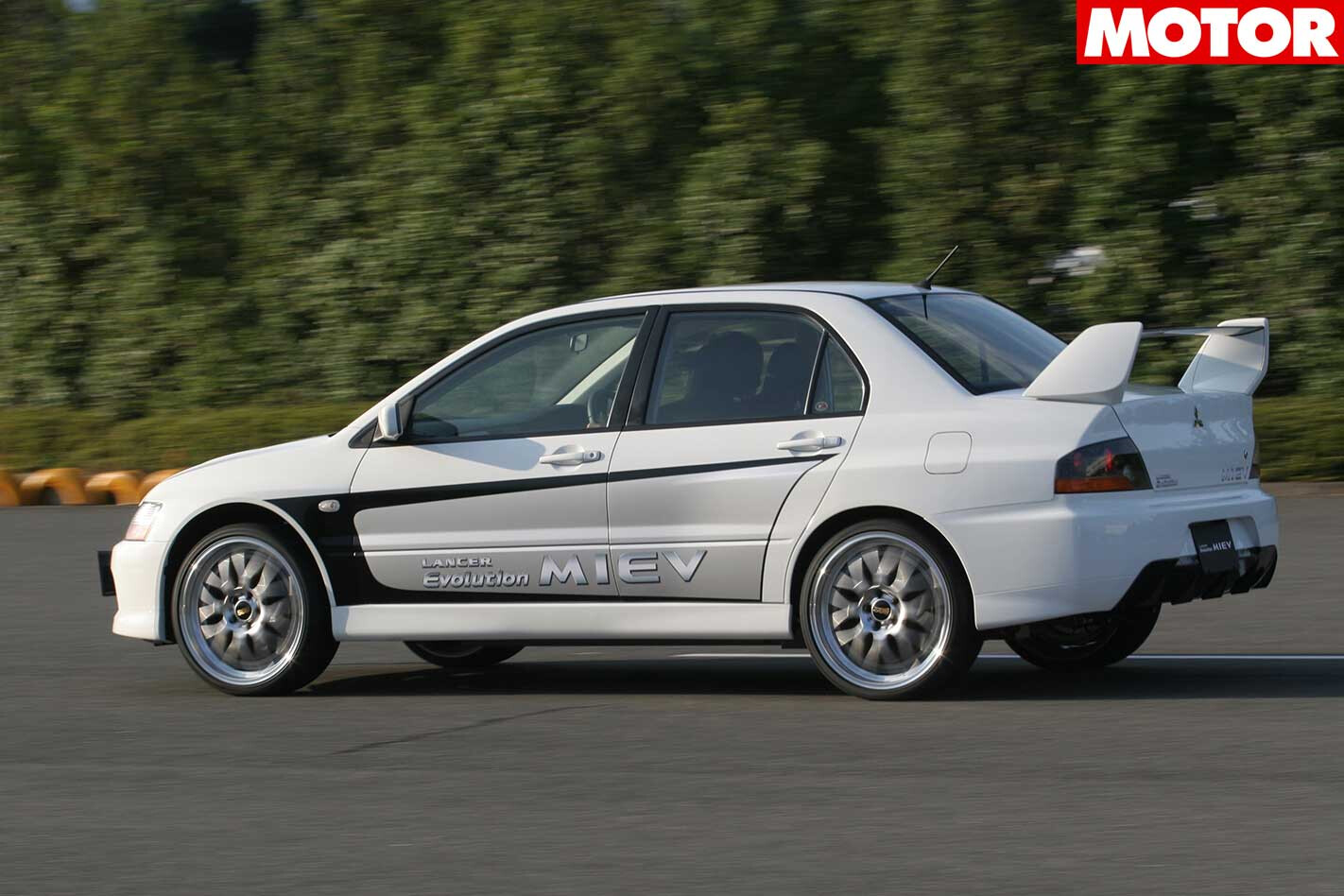 For a start, concealed inside each of the four wheels is a powerful 50kW in-wheel permanent-magnet synchronous motor, for a total of 200kW. That undercuts the standard Evo’s power output by a whisker, but the figure we should be focusing on is the torque value; the MiEV generates a mind-blowing 518Nm. That’s just 2Nm less than a FPV GT!

The second surprise is in the engine bay; it’s empty. Apart from a backpack-sized inverter mounted down low, and another in the boot, the engine room looks deserted. These inverters draw electric power from the 18 lithium-ion battery cells cleverly fitted under the floor and channel juice to the in-wheel motors, with the front inverter driving the fronts and the boot-mounted inverter powering the rears. 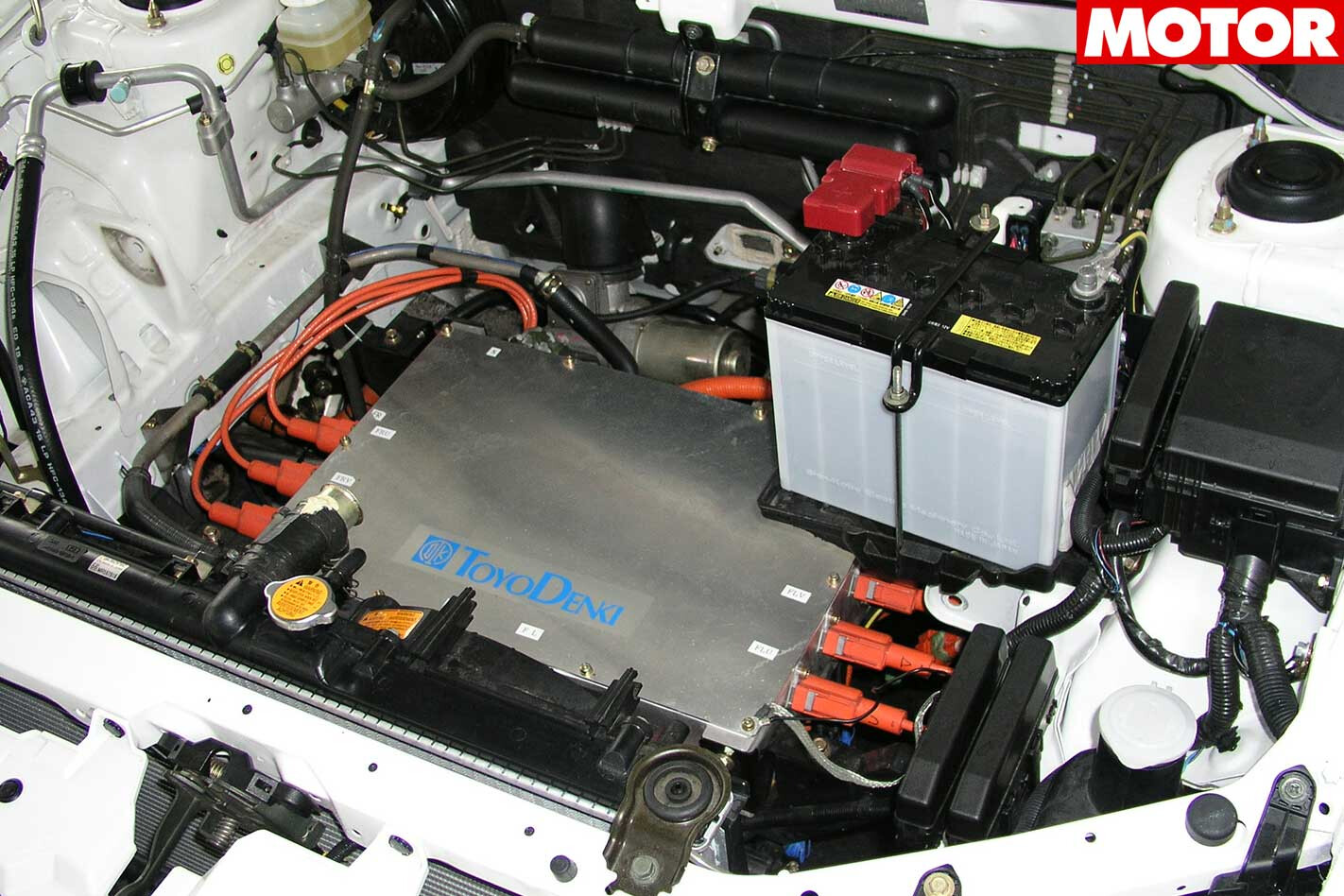 Mitsubishi has tried to balance the subtraction of the engine and drivetrain’s weight against the addition of the batteries and motors, but the stock Evo’s 1420kg still swelled to a hefty 1590kg.

The company does say, however, that it plans to reduce overall weight by as much as 100kg through downsizing batteries, magnets and motors, while maintaining current power levels. That will also help to improve the car’s range, which stands at just 250km on one charge. That’s about what you you get out of a regular Evo if you’re one for fanging around, though… But on the road, the extra weight is barely noticeable thanks to the hefty helpings of torque on tap. Steering was light but responsive, and the throttle was heavy but progressive, boasting instant, effortless acceleration.

There is no transmission loss with electric cars, just lightning fast throttle response; it, along the lack of noise, really takes a while to get used to. The ride is harsh, thanks to the low-profile 20-inch Dunlop SP Sport Maxx rubber. 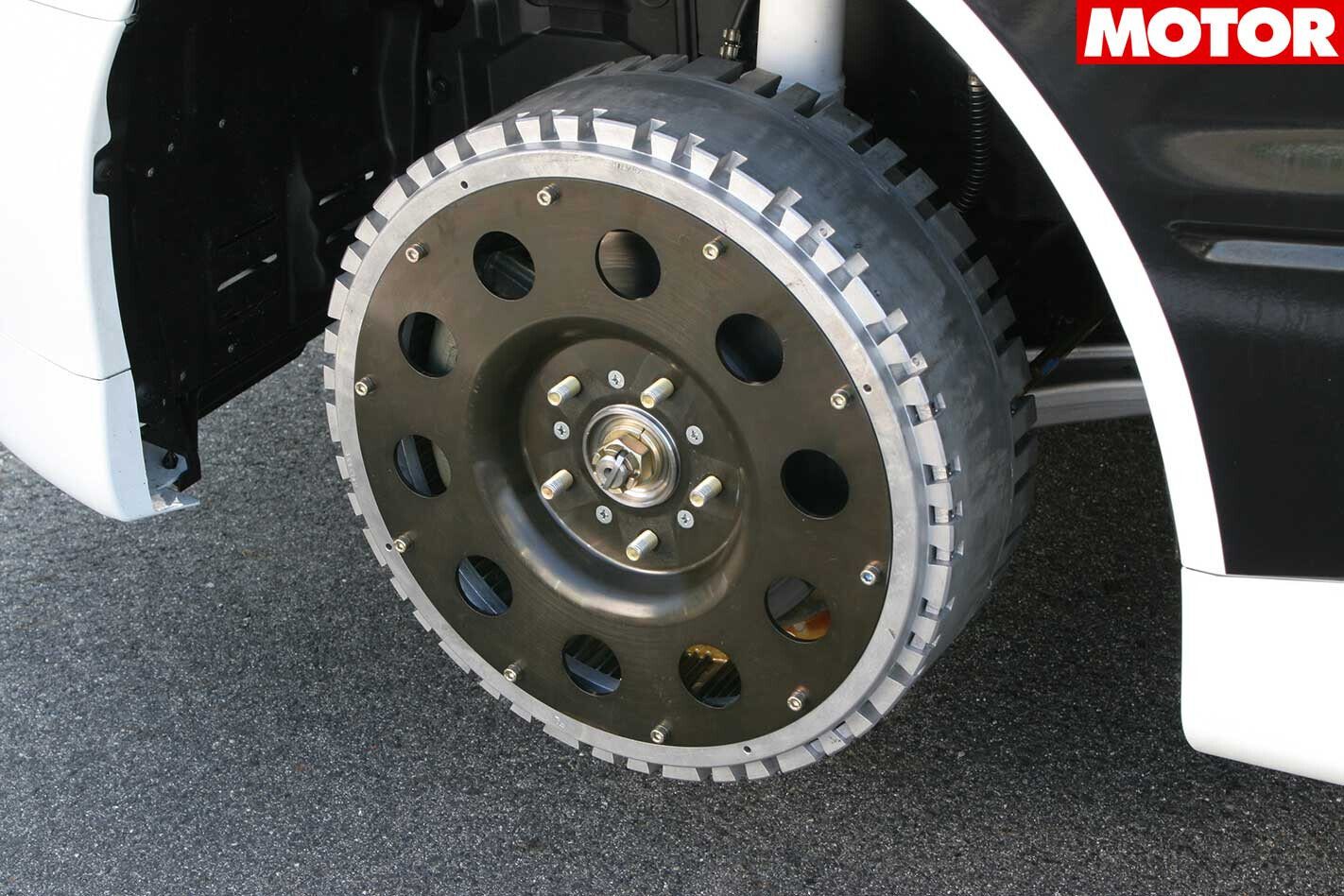 “The trade-off between size and power is our biggest challenge,” says MIEV engineer Kenichi Tsutsumi. “To reduce the tyre size (thus improving ride quality) is desirable, but that would mean decreasing the size and power of the in-wheel motors. To generate current power levels from smaller motors is our end goal.” While this electric technology will be fitted to an all-new Evo within four to five years, we can expect to see a smaller version of Mitsubishi’s first production electric car in the form of the i-MiEV, slated to go into production by 2008. It will employ one inverter powering rear-mounted in-wheel motors. Expect the MiEV to be ready for the road sometime in 2010.

With the breathtaking speed that this technology is hurtling along at, along with the obvious advantages that electric power provides (huge torque, instant response and no emissions), the Evo MiEV could be the start of something very special.

LIKE: A startling peek into a green high performance future.
DISLIKE: Limited range at present, and will need to lose weight
RATING: 3.5 out of 5 stars