Nobody’s going to sledge you for skimping on the basics if you hand over a set of keys to an all-wheel-drive wagon boasting two turbos bolted onto a neat 10 cylinders, resulting in 426kW of power.

This article was orginally published in March 2008

Even if you’re not impressed by 580 old-school horses (they’re Clydesdales, too, not Shetlands), you should know that the Audi RS6 is no peaky, flash-in-the-pan performance car. As if 5.0 litres of all-alloy V10 wasn’t enough to do the job, Audi has strapped on a pair of turbos to flesh out its entire rev range with enough torque to skew a continental plate.

Calling it strong would be ludicrously modest. And, from the 6250 point, where the torque tapers away, the power plateaus in a flat line at the top of the range for 500 revs itself. 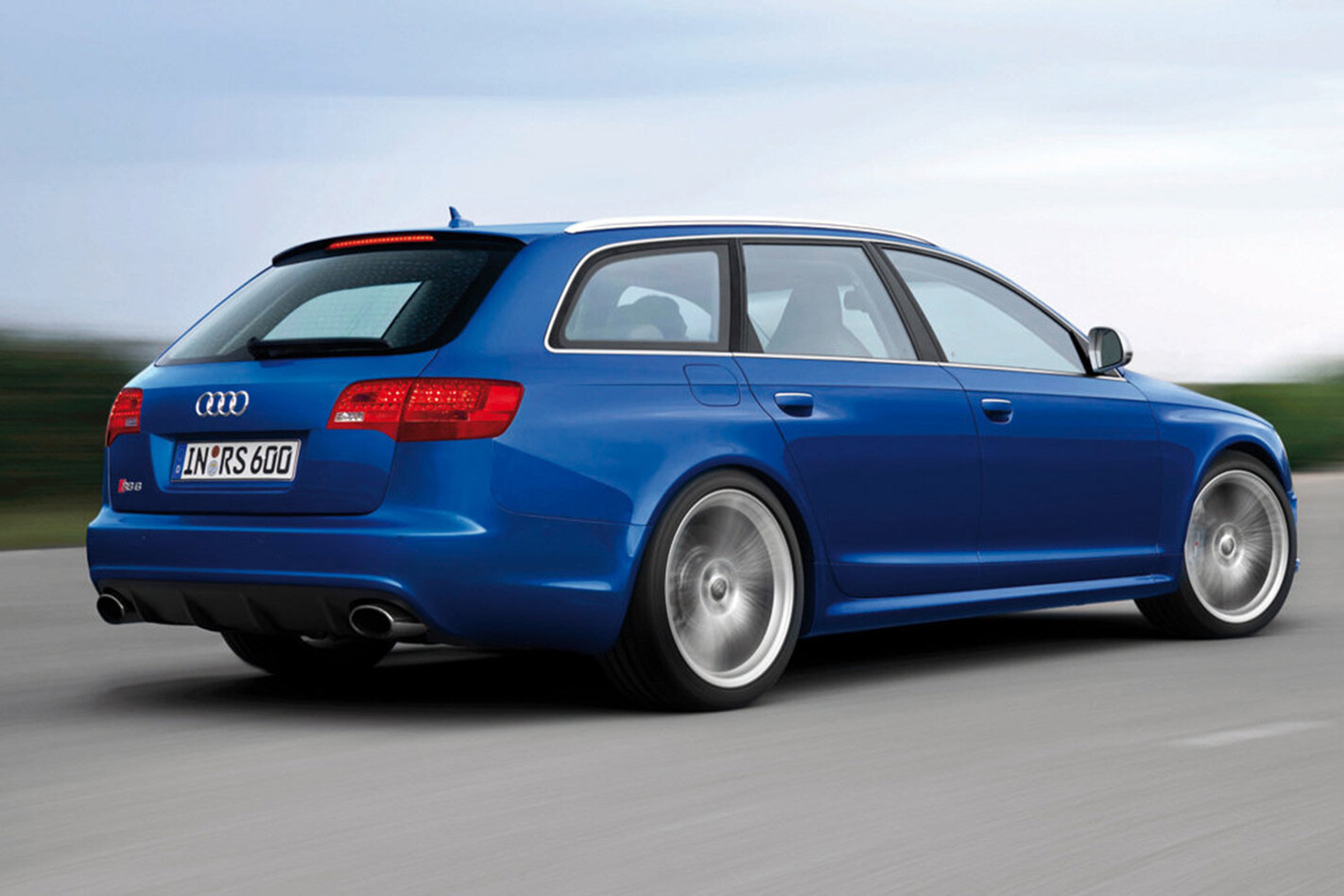 And even that’s not all. The RS6 is a wagon, so you can drive it to and from work every day, you can splash it through mud, and you can chuck in your surfboards or goat boats if you want. And, just in case you’re interested, it’s bloody quick. At 4.6sec to 100km/h, the new RS6 is actually a tenth slower than the RS6 Plus it replaces.

Big deal. Its suspension and chassis are so much more sophisticated than the old car that it rips around the Nordschleife more than 20 seconds faster (8:09, if you’re interested). And that’s the point.

There’s nothing subtle about the RS6 concept – it’s all about taking the already-brisk and luxurious S6 to ridiculously muscular levels. And it does it sensationally well, apart from one or two areas.

The first and most obvious negative is the engine note. At idle, there’s only a static moan leaking out of the twin rear pipes. Gentle stirring creates a slightly deeper groan, but it’s only when it’s properly booted in the guts that the V10 manages to exude some aural menace. 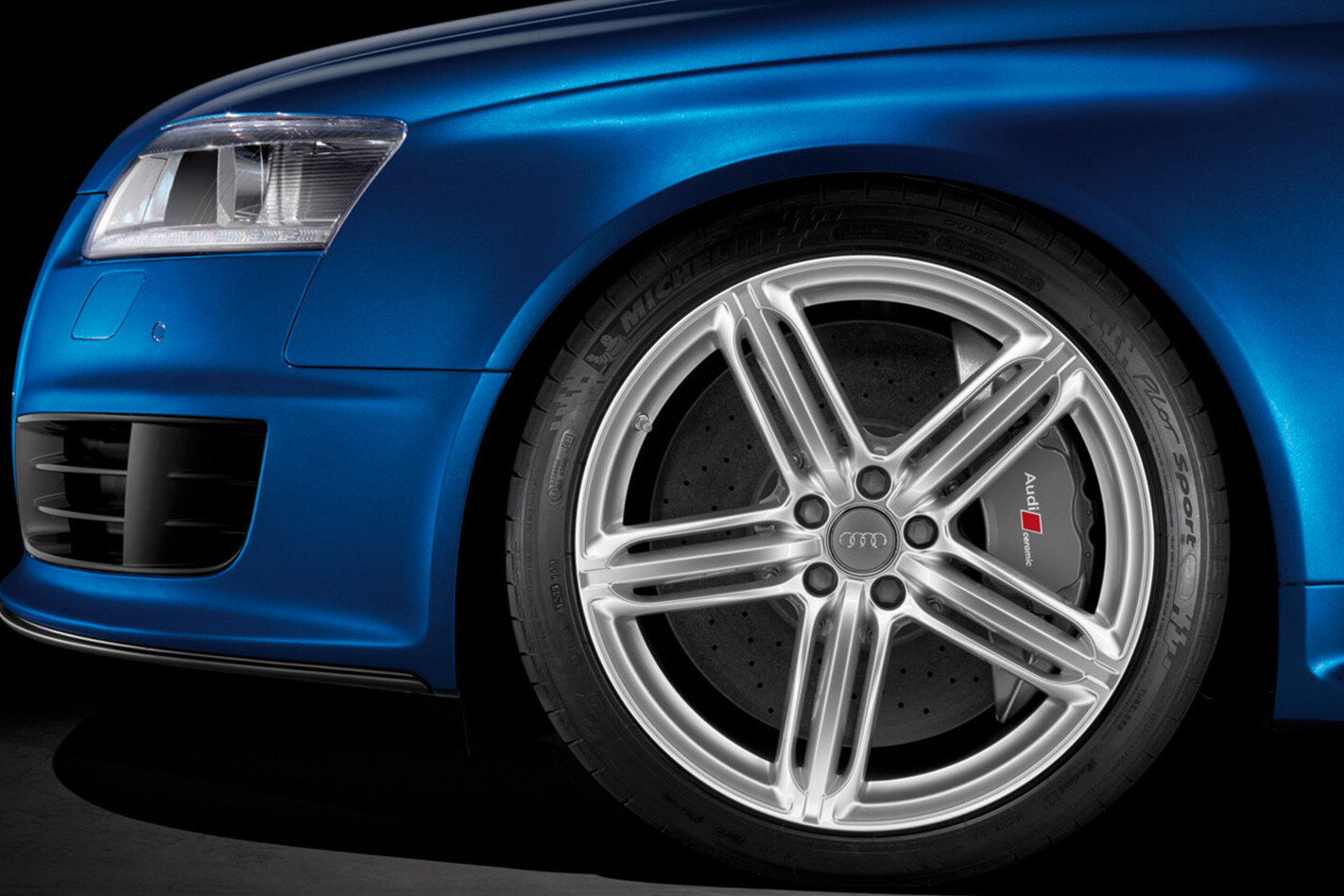 It’s different inside, of course. At idle, it sounds like a diesel. Give it everything and it just sounds like a big engine, not a fast or flexible one, and nowhere in its rev range does it overflow with the attitude you’d expect.

But if you’re inside when the V10’s cracked open – I mean, properly cracked open – the lack of a quality engine note won’t be uppermost in you mind. You’ll be adding your own sounds to the cacophony because the only word that adequately describes the way it moves is one you will shout involuntarily.

Even with all the electronic safety nets at high alert, the RS6 will still light up all four boots in a screeching chorus of terrified Pirellis as the engine cranks up. It instantly shoves you deep into its tight, boldly stitched leather eat and pins you there as the dotted white lines turn solid – then it shifts up swiftly, with a burbling fuel cut-out, and does it again. And again. And again.

A g-analyst trace on this thing’s acceleration would be disturbingly flat, right up to around 180-200km/h because it just never, ever lets up. The RS6 is so rapid – so pervasively and disconcertingly fast – that it takes a few kilometres for your innards and sensory perceptions to catch up. It’s even more urgent and involving in the Manual mode. Forget the wrong-way lever – the RS6’s steering-wheel-mounted paddles get the job done better and more intuitively, right up until the tacho needle strikes an old-school, hard-cut rev limiter.

The drive for this car is twisted into a new six-speed auto gearbox casing and through new Six Million Dollar Man innards – being stronger, faster, better. Its torque converter is locked up most of the time and it’ll shifts in 0.5sec – half the time it takes in an S6.

The only trouble is that, with the engine note so one-dimensional in its delivery, you end up striking the limiter rather more frequently than you want, especially in the lower gears.

The gearbox (and its fuel cut-out provides the warmest, bubbliest crackling noise the engine is capable of delivering) ends up repeatedly racing against the tacho needle to get its recoupling finished before the latter crashes into the limiter. It’s a race the crunching motor often wins and it means that, in first or second gear, you need to shift at around 6200 to beat the 6800 limiter.

The whole idea, according to quattro’s development boss, Stephan Reil, was to keep the RS6 better balanced on a track or on tricky corners, where hitting the limiter de-stabilises it less than the lost drive of an upshift. The philosophy of human trust isn’t complete, though, because it will still kick down, even in Manual mode, in response to a snapped-open throttle. The V10’s IHI turbos are only cranking 0.7bar and, according to quattro’s head of engine development, Axel Eiser, “800Nm is no problem and 700hp [522kW] would not be a big thing to give.” Even so, as an indication of just how strong this car is, Audi offers a package to lift the 250km/h speed limiter to 280 which, for the driveline at least, is a doddle.

With the limiter removed completely, the engine is strong enough to pull to its redline in sixth gear – good enough for 330km/h. And Eiser knows. He was driving it at the time… It will also, according to Eiser, give between 400 and 450km of range out of its 80 litre tank – at 200km/h!

An engine like this brings into sharp focus every other flashpoint in a heavy car – brakes, tyres, balance, steering and suspension. The RS6 Avant is strong in most of these areas, but not quite integrated and it somehow doesn’t quite gel or flow harmoniously.

Its steering, for example, receives inputs from a fat, beautifully trimmed leather wheel (does anybody do better steering wheels than Audi?), but responds with heft rather than crisp dexterity. You can forgive it some of this because it uses fat Pirelli P Zero 275/35ZR20s to organise the diversion of momentum bred from 2025kg x 280km/h, but it could be better. The wheel feels weighty, meaty and manly, with a lot of resistance and more self-centering than almost any other car on sale today. There’s just 2.2 turns lock-to-lock (covering a large 12.2m turning circle), but the RS6 only returns genuine information when it’s utterly outta grip.

It could be a lot worse, though, and the improvement of the front end (while still restricted in its performance by Audi hanging all of this engine, plus ancillaries, in the fresh air forward of the front axles), is a major point of advancement.

There’s none of the rampant tram-lining the old car used to keep you awake with, even though the new car is on larger wheels and tyres. It’s also willing to tighten or loosen its line mid-corner, where its predecessor was the king of the one-liner.

Chassis wise, it’s also surprisingly grippy. A series of corners highlights, inevitably, the nose-heavy engine positioning, but on any given corner, long or short, the RS6 excels. It turns in confidently, picks up the throttle quickly (even faster in Sport mode, where the throttle mapping gives up to 30-percent faster pedal response) and leaves ripples in the bitumen on its way out. 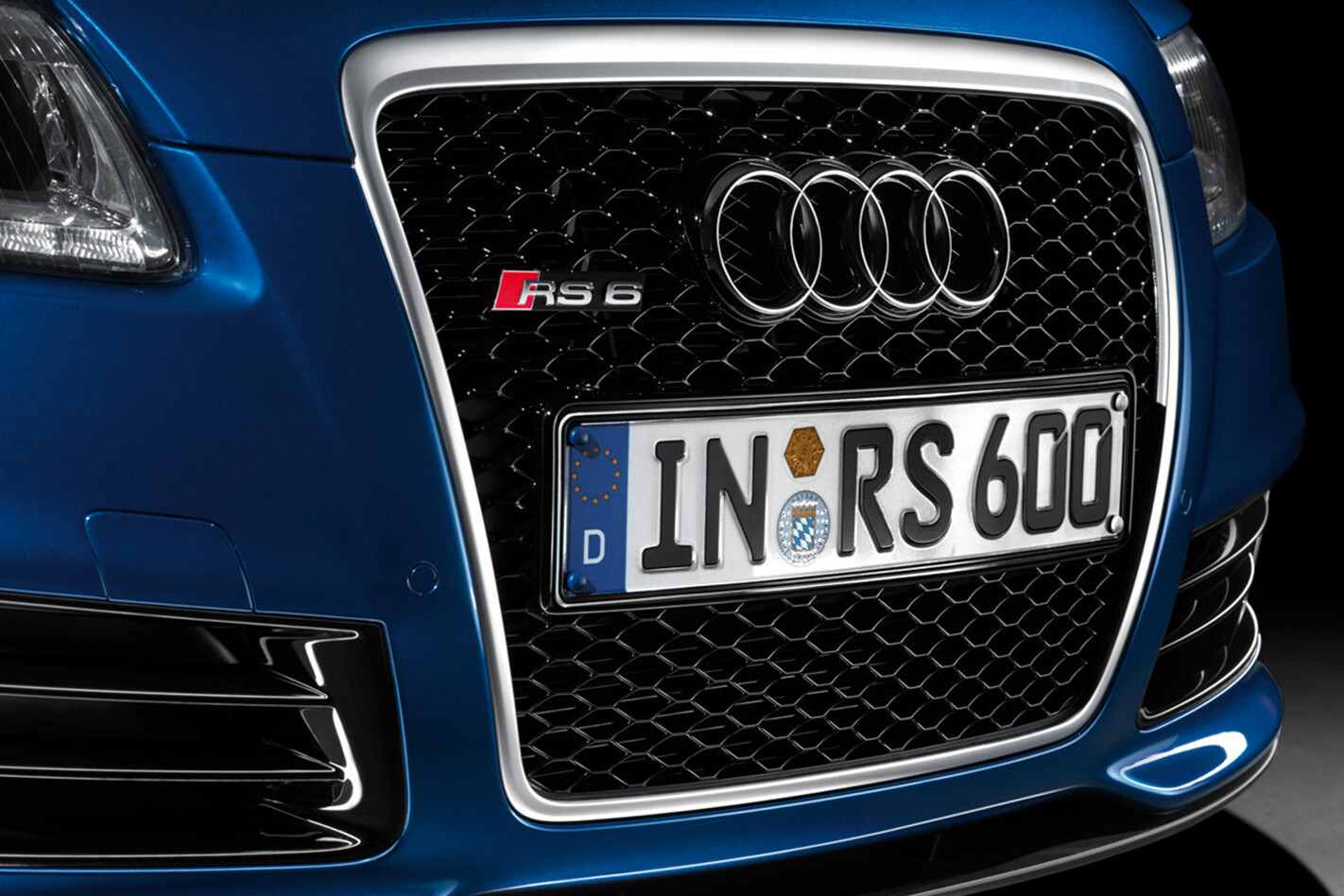 The Pirellis gently hiss with exertion before they start whispering in an understeer that, at long last, sends nibbles to the steering wheel. You can correct it with the brakes or the throttle for minute changes of direction, but the throttle is more fun. With the drive split sending 60 percent to the rear wheels, the RS6 can drive its way through the understeer (while lighting up the ESP along the way) to throw its muscle rearward.

The Dynamic Ride Control (to reduce roll and pitch) and adjustable dampers help, along with stretching the track widths 44mm at each end and stiffening the springs 12 percent over the S6. Still, most people will find the Comfort mode too gooey and the Sport mode too vertically imposing (except for track days), while the Dynamic mode is j-u-s-t right. 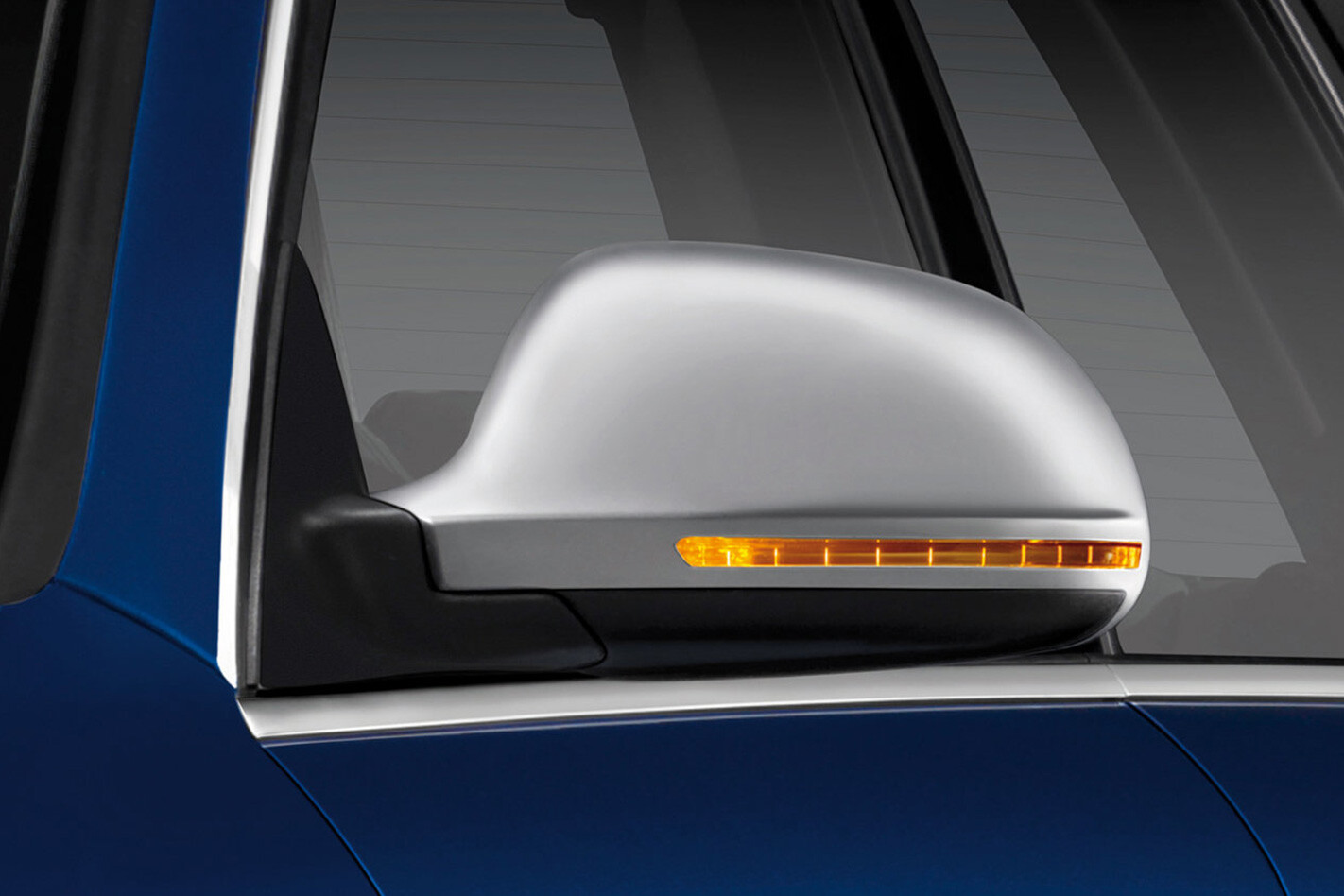 Toss in two corners, though, and you can rattle even that much wizardry. The balance just isn’t there to flick one way and then another, and there can be a bit of a wait before the suspension harnesses all its kinematic doings and brings them to bear on the second apex.

The ESP might work hard and often, but it also displays a new-found subtlety that – on public roads at least – convinces you of the value of retaining its services. Turn it off on track and the rear-biased corner-exit stance just becomes more pronounced. Ultimately, though, it’s not what you’d call nimble in its athleticism. It’s just very secure. 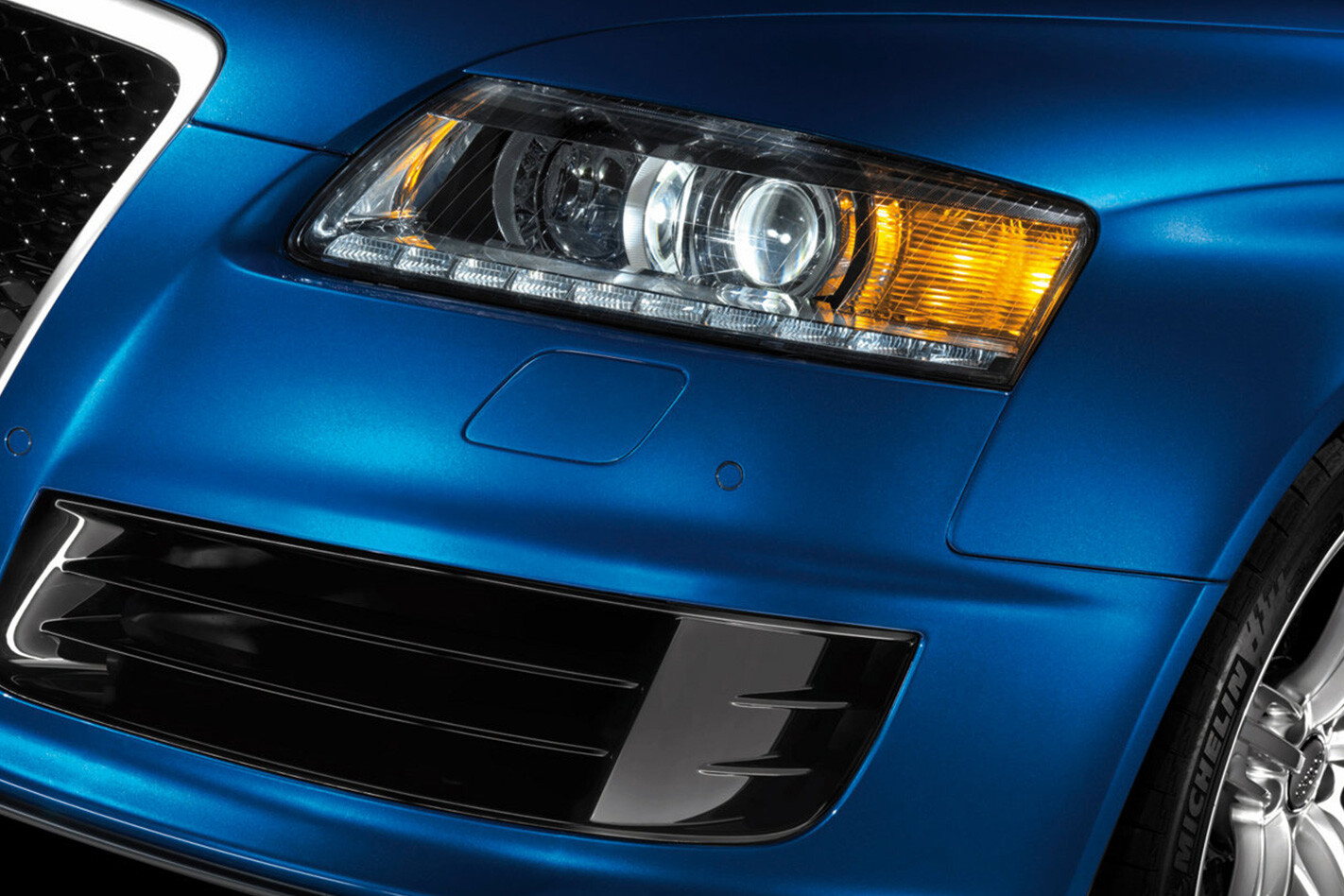 RS6’s brakes (plucked from Bentley’s Conti GT parts bin) are strong and, with eight-piston front calipers, consistent in their performance and pedal height. The monobloc calipers squeeze monster 390mm Alcan front rotors and keep on doing so. You just need to remind yourself that, strong and all as the anchors are, there’s a lot of momentum to rein in. The (optional) ceramics, with six-piston calipers, are even stronger.

Oh, and the RS6 has an interior, by the way. It’s full of nice leather, sculpted seats and audio whiz-bangs but, for now, it’s hardly the point. Suffice to say the RS6 is superbly equipped, stylishly appointed, and nice to look at. It has everything you’d expect if you were buying an exclusive luxury car.

But you’re not. You’re buying an exclusive, practical luxury car that can, at the drop of a throttle, turn into a crushing, easy-to-drive, all-pervading monster.

Which is how it should be…