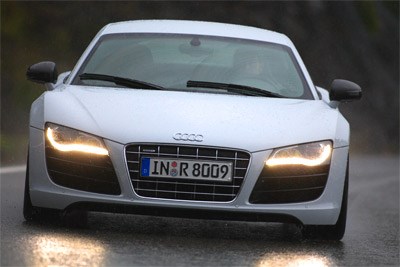 The guys from Audi's quattro GmbH performance division were quite specific. When they whipped the covers off the R8 V10 at the Detroit motor show back in January this year, we asked whether it was really worth the extra $80K-ish over the sublime V8 R8. They simply smiled and said "yes", without the faintest hint of doubt in their minds that the R8 V10 was something very special indeed.

But PR spin is one thing, another question entirely is: does this Audi really have the goods to go head-to-head with Porsche's 911 Turbo? And that's exactly what we're in Spain - with the keys to one of the first R8 V10's to roll off Audi's Neckarsulm production line - to find out.

Audi anoraks will no doubt spot the subtly revised front end with its chrome interlaced grille and altered LED headlamp graphics, then register the larger side air-ducts set in wider carbonfibre panels behind the doors and trick 19-inch alloys shod with Pirelli P Zero tyres. The visual differentiation is subtle, though - much less apparent than that between the 911 Carrera and the Turbo, for example - and we can't help but feel Audi could, and should, have done more in the looks department.

But it's that engine mounted behind the snug two-seat cabin that takes centre stage - and you get to survey it in all its glory through the glass window that doubles as the engine bay cover. It's essentially the same strato-revving, 5.2-litre V10 engine used in Lamborghini's recently released Gallardo LP560-4, albeit detuned to introduce an added layer of low-end flexibility and greater refinement.

Malaga is a favourite backdrop for European car launches. In summer it plays host to a heaving mass of sunburnt holiday makers. But this is winter, it's barely ten degrees and the majority of hotels and resorts are locked down for a good few months yet. The roads that wind their way northwards into the surrounding hills are empty apart from the odd local. A good day to be at the wheel of the R8 V10...

It doesn't take long to discover that the newcomer possesses a more purposeful character than the R8 V8 - itself hardly lacking in the charm department. Yes, there is serious ability here. The new engine is not just great to behold but also wickedly potent. It is undoubtedly the finest part of the new car.

True, the compact donk doesn't possess quite the same spine-tingling qualities as it does in LP560-4, where more aggressively milled camshafts spinning with different timing and other detail changes see it deliver an extra 24kW and 10Nm. It's less manic as revs are wound on in earnest, but to get hung up on comparisons with a car costing more than half as much again is to miss the point entirely. It may have ultimately been developed with user friendliness in mind, but the R8 V10 is still capable of sending your pulse off the scale when the traffic clears and you finally get to let it off the leash. Plant your right foot and you're thrust forward in brutal fashion; the action in low gears is extreme, while in higher ratios a touch less so, but still possess the kind of incessant urgency not found in any other Audi.

Such is the ferocity of it all, the R8 V8 feels almost tame by way of comparison.

Audi's quattro division's official numbers put the sprint from zero to 100km/h at 3.9sec - some 0.7sec faster than the R8 V8. The way the engine note hardens to an intense mechanical scream over the last 1500rpm certainly makes it believable. It also claims the R8 V10 will double that speed in a further 4.2sec, reaching 200km/h in just 8.1sec. It doesn't quite hit the old double ton flat out, the gearing leaving it preciously close at 316km/h. Not that you'll ever feel short changed.

If there is a weak point within the driveline, it is the optional R-tronic gearbox. Had Audi resisted temptation and equipped all of its launch cars with the standard, and superb, six-speed manual we wouldn't have any reason for complaint. But we were thrown the key to an R8 V10 packing the R-tronic sequential manual. It does away with a clutch pedal and adds paddles behind the steering wheel while providing the driver with the choice of either manual or automatic modes, the latter offering an additional sport program. Sounds good in principle, but the shifts are too long-winded and switching into sport only adds an unpleasant thud through the driveline on each change of ratio.

Still, it's only a blip on what is otherwise one of the most complete and easy-to-drive supercars of our time. Audi quattro boss, Stephan Reil, says his engineering team ran over 8000 kilometres during testing at the 'Ring. It shows. The new engine provides the means to fully exploit the low slung Audi's underpinnings - a combination of aluminium intensive double wishbones all round. Despite a 225kg increase in kerb weight, inherent balance remains a defining feature. You feel good about driving it up to around nine-tenths. Beyond that, it demands respect. But you never feel the same sort of trepidation you experience attempting to get on top of the Lambo LP560-4.

Audi has retained the same apportioning of drive as in the R8 V8, with 35 percent delivered through the fronts and the remaining 65 percent channelled rearward. This makes it feel a lot like a rear-driver when pushing hard onto the straights and braking late into corners. There is great control within the aluminium body - albeit with greater levels of roll than in the firmer and noticeably more hardcore LP560-4.

So, an ultra fast, phenomenally responsive and immensely capable supercar - equally at home in the city as it is on the most challenging of back roads. On first impressions the R8 V10 is more desirable and a good deal more exclusive than the Porsche 911 Turbo. It is also far cheaper and a better everyday proposition than the Gallardo LP560-4. And yes, the Audi lads were right: it is worth paying the extra over the V8, which we now consider to be a little under done. Make no mistake, this is a car of great depth and completeness; arguably the best supercar in the real world.
Audi R8 V10
Body aluminium, 2 doors, 2 seats
Drivetrain mid-engine (north-south), all drive
Engine 5204cc V10, dohc, 40v
Power 386kW @ 8000rpm
Torque 530Nm @ 6500rpm
Transmission 6-speed automated manual
Size l/w/h 4435/1930/1252mm
Wheelbase 2650mm
Weight 1625kg
0-100km/h 3.9sec (claimed)
Price $360,000 (estimated)
On sale Third quarter 2009 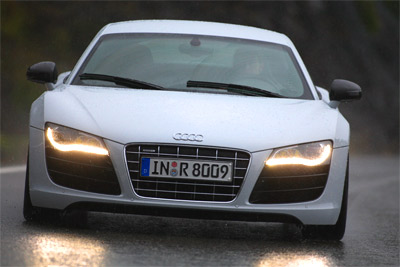 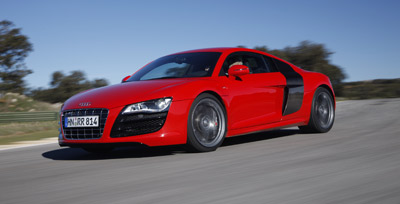 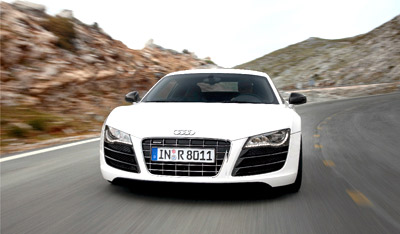 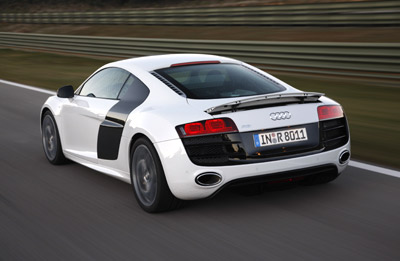