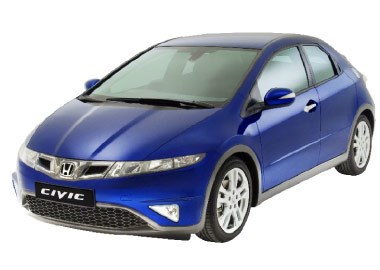 UK-built five-door has lots to offer Oz buyers ... for a price.

HONDA'S Civic five-door is one of those rare cars that combine looks with intelligence. Due to arrive in Australia mid-year, the UK-made hatch stands out in the big-selling small-car crowd, its exterior design makes everything else look plain, while the interior's clever flexibility outsmarts the opposition.

Because the Civic hatch launched back in '06, and exports to Oz of the Type-R three-door began the following year, the five-door won't be entirely unfamiliar. In fact, with its Alfa-like blacked-out rear door handles it's not hard to mistake the five-door Civic for a three-door.

Extra doors aside, there's little difference. Same chunky profile, thrusty stance and bold details. The effect is very Japanese. Civic's shape reminds me of the miniature radio-control caricature cars you see for sale in Tokyo toy shops. It might alienate some conservative small-car customers (who'll no doubt scurry off to a Toyota showroom to check out the soothingly unadventurous Corolla), but the Civic will also attract others.

The Honda's interior is equally interesting. The instrument panel is the same bi-level design seen in the Civic sedan, with digital speedo above and beyond a large, blue-lit single dial housing tachometer and multi-function display. The rear of the cabin doesn't look special at first glance, but it features the same kind of seat-folding smarts as seen in the Jazz.

As well as being practical, the Civic hatch is also an above-average drive. While the car is built with a pair of petrol engines, only the larger unit is headed for Australia. Thanks to a recent mid-life upgrade, the 103kW 1.8-litre i-VTEC is now available with a five-speed auto as well as a six-speed manual. The availability of the conventional auto probably accounts for Honda Oz's decision to begin imports in '09. Previously there was no true auto available, only an automated version of the six-speed manual, dubbed i-Shift.

The engine is a smooth-spinning honey. Power delivery is linear, and accompanied by some induction honk at the big-number end of the tacho dial. The manual tranny is typical Honda; brilliant. It's slick, precise and filled with a bunch of relatively close-spaced ratios. The auto is fine, too.

While it doesn't seem to do the handling any harm, the hatch's simple torsion-beam rear suspension might explain the level of road noise. On coarse-chip surfaced British roads and motorways the hatch is raucous, noticeably louder than Civic sedan with its multi-link rear end. But the electric steering is excellent. It's direct and delivers a good sense of connection.

Road noise aside, the hatch's only other obvious shortcoming is visibility. That rising waistline and chubby C-pillar do hinder over-the-shoulder sightlines. The view directly to rear isn't great, either.

Prices? Honda Oz planned to sell only upmarket versions, to cover the high cost of the UK-made hatch. And that was before the GFC. But even if Civic prices do start at close to $30K, as looks likely, it's a car that at least provides some persuasive reasons to pay the extra. 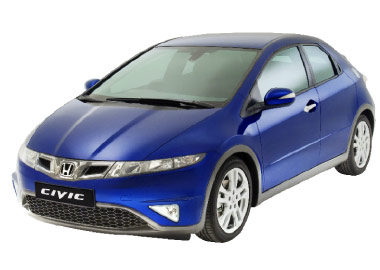 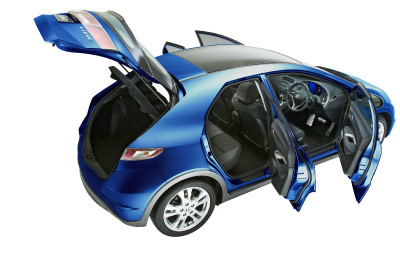