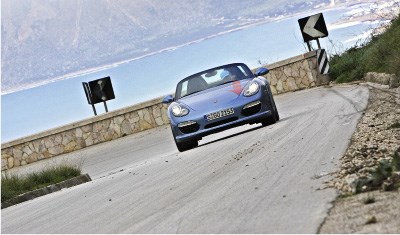 Heads swivel and lips move as the pale blue, Florio-liveried Boxster crawls the cobbles of the narrow Sicilian street. Wall-echoed, the growl from the flat six obliterates the cries of the citizens of Castellammare del Golfo. Their comments may be in proper Italian or the island's dialect; I can't hear. But every expression and gesture I can see says that the sight of this little German car has brightened their winter morning.

Having furled the Boxster's electric soft-top entering town, after a roof-up morning autostrada run from the south side of the island, the clouds part briefly as we snarl up the hill, leaving the town behind and below. The new 3.4-litre engine of the Boxster S revs harder than ever, makes more power than ever, all while using less fuel than ever. Sounds better than ever, too. And the seven-speed Porsche-Doppelkupplungsgetriebe, mercifully abbreviated to PDK, is a brilliant accomplice for this accomplished engine. Match a mode to mood - leave it in default auto, select 'Sport' or the PDK-specific 'Sport Plus' settings - or instead choose gears manually. Whatever you select is going to be good. Ascending the hill I decide to stick-pick, ignoring the pair of steering wheel-mounted paddles. The shifts are amazingly swift, unfailingly smooth.

The precise responsiveness of engine and transmission encourages any driver, any real driver that is, to aim for equal exactitude with steering wheel and brake pedal. The desire to match this car's ability is almost irresistible. So you concentrate on trying to trace perfect arcs through the corners and making timely transitions from luscious acceleration to determined deceleration. And no matter how good you are, the Boxster will make you look better.

It may be a little old-fashioned these days to include mention of foldaway roof and two seats in a definition of 'sports car', so forget about that. By any set of criteria the Boxster is a great car, full stop. It commands, and deserves, reverence.

Dr Wendelin Wiedeking is very fond of it, too, although not for its design, performance, or dynamics. No, Porsche's president and chief executive officer loves the Boxster because it saved the company when it was on the verge of death in the early 1990s. And the physician who prescribed the cure? Dr W. Wiedeking, of course. At least, that's the story he told during the welcome speech the previous evening.

First, he made it clear how serious the threat was to Porsche's survival. Production of the unprofitable front-engined 928 and 944/968 model series had been stopped. The rear-engined 993, last of the air-cooled 911s, as it turned out, was the only car Porsche built. Something else, a brand-new car, was needed to expand sales, increase profits, and save the company.

Porsche would have ceased to exist if the new product didn't succeed, insists Wiedeking. "This decision was vital," he says. "If we had not won, we would have lost everything."

With Porsche now hugely profitable, and owner of a 50-plus percent share of Volkswagen, one of the world's major-league manufacturers, the company's health (and wealth) is astonishing. And it all can be traced back, says Wiedeking, to the Boxster concept built in 1992, unveiled at the 1993 Detroit show.

The next morning everyone gathers to their car for the day from the line-up parked outside our classy Kempinski Hotel in Giardino di Costanza. They're all S-spec, which means the now 228kW 3.4-litre engine. And all are PDK-equipped.

The changes to the S engine (shared with the Cayman, naturally) are wide ranging. Last night I'd spent some time with Frank Maier, engine design team leader on the flat six. Maier is youthful, but has spent his entire career at Porsche, working his way up through the engineering ranks. His first assignment, he tells me, was working on the oil system for the V8.

The reason I'd chosen an engine expert is simple. Drivetrain aside, there's not that much change. The body structure is unaltered, and external changes are restricted to the front and rear plastic, and a different outline for the car's new 'two-tube' headlights. Inside, there's a new-look centre console and little else. Chassis changes are restricted to tunable items like springs, dampers and tyres.

Maier's English is fine, until he gets to the deep tech terms, so he collars a passing interpreter to help sort out the luft and leistung stuff. With a neatly cross-sectioned engine as handy instruction aid, Maier describes the most important features.

Even though he's an engine guy, Maier is also able to answer my questions about the PDK. It's basically the same seven-speed double-clutcher as in the latest 911, although it points the other way and spins in the opposite direction in the mid-engined Boxster. Maier's able to tell me that the PDK's clutches and gearbox are lubricated separately. There's a pressure circuit, including cooler, for the clutches. The gears, on the other hand, don't need to cope with so much heat and make do with simply whirling about in the right sort of oil. Neither fluid needs changing at service time. Both the clutch and gearbox compartments are factory filled for life.

These arrangements sound quite satisfactory, so I'm confident that sampling the S's launch control isn't going to cause any harm. Porsche's launch control is very easy to access. Press the 'Sports Plus' button at the bottom of the centre stack. Press brake pedal firmly with left foot. Floor throttle with right foot, and check the central info display for written confirmation that the mode has been invoked. Release brake, quickly and completely.

For a few fractions of a second the Boxster S's drivetrain computer trims torque to minimise wheelspin, while the car leaps forward with lung-emptying vigour. But it seems to take only a few metres for the big (optional) 265/35ZR19 Michelin Pilot Sports behind me to hook up 100 percent. At each upshift by the PDK there's only the most fleeting pause in push. It's so impressively adept and gloriously effective that I have to do it again. Immediately.

According to Porsche's figures, the PDK-equipped S is a fraction faster than the six-speed manual; 0-100km/h in 5.2sec, 0.1 quicker (5.0sec with launch control). Assuming the driver of the manual achieves a perfect launch, of course. Often they won't, making the real-world advantage of the PDK-equipped car often even greater.

That the PDK contains seven gears to the manual's six is part of the explanation for its efficiency edge. The other is that the PDK's seventh is a tall overdrive gear. This, according to the gearing chart, means the Boxster S with PDK reaches its top speed of 272km/h in sixth, spinning at a fraction above 7000rpm.

What I do learn first-hand is that the S's engine is fabulously tractable. Dawdling through the Sicilian landscape, the Boxster is happy to pull seventh at only 1500rpm. And it will accelerate without the slightest complaint from these low revs, too. More often you want more.

Almost lost, somewhere inland from Marsala, we pass a pair of shepherds. They're the first real, professional sheep herders I've ever seen, in fact. It's a perfect picture postcard composition; two blokes, shaggy white flock, plump hillside, perfectly grassed and bathed in sunshine. Just to give them some relief from the monotonous tinkle of sheep bells, I prod the throttle. The PDK smoothly drops a couple of gears, perfectly matching revs each time, and sending the revs soaring in a musical wail. It's too far to read their expression, but their heads turn.

And so they should stare. Porsche set out to build a better Boxster. In the case of the S with PDK they exceeded the objective. It's not only a better Boxster, it's the best. 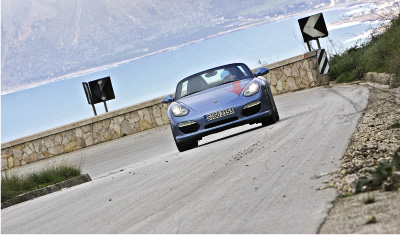 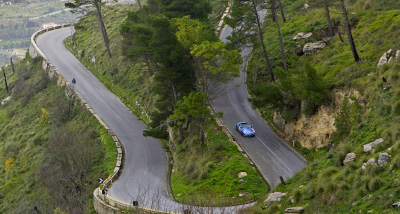 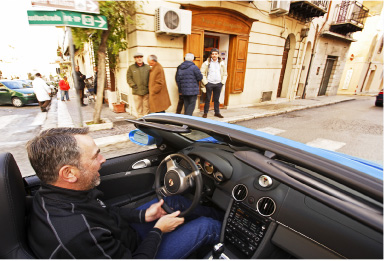 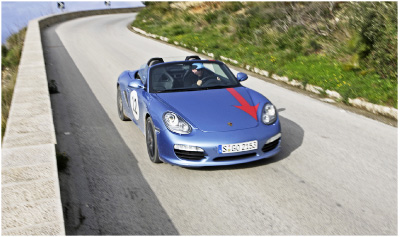