A front-drive BMW X1 is a big step ahead in terms of packaging. It's a shame the way it rides doesn't live up to the same standards.

WHAT IS IT?
This is the second generation of the BMW X1, the car-maker’s smallest SUV and the first to be based on its new front-wheel drive architecture. Not only does it boast fresh underpinnings, there are new engines, transmissions, an updated all-wheel drive system as well as vastly improved packaging. It’s much better value for money, too.

WHY WE’RE DRIVING IT
This is our first drive of the BMW X1 on Australia’s often treacherous roads. We drove it earlier in 2015 in Austria, however the smooth European surfaces meant a genuine indication of how the new model would stack up in SUV-hungry Australia was not on the cards. Now, the X1 has to face our roads and the demands of Aussie customers.

MAIN RIVALS
The Audi Q3 and Mercedes GLA are natural rivals of the German luxury trident, but there’s also competition from cars such as the Lexus NX and forthcoming Infiniti QX30, itself based on the Mercedes. 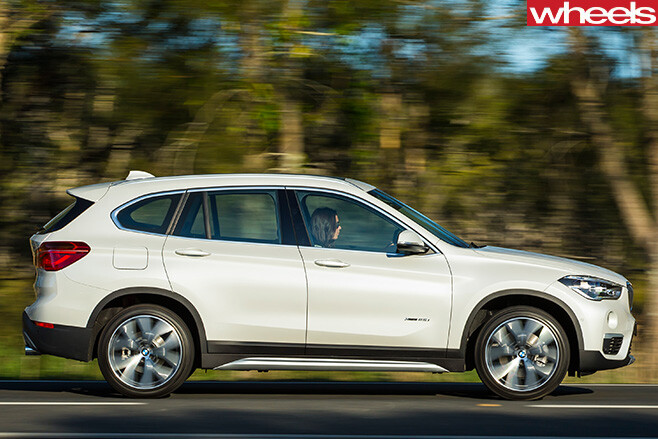 THE WHEELS VERDICT
The X1 is a marked improvement in terms of packaging, drivetrain refinement and value for money. BMW has taken advantage of the front-drive architecture to increase the X1’s desirability, practicality and value, but it suffers from run-flats and a ride that simply cannot cope with bumpy Aussie roads.

PLUS: Excellent packaging with ample passenger space in both rows, as well as flexible use of the spacious cargo area. Drivetrains are strong and refined, with excellent interior fit and finish wrapped in more cohesive styling.
MINUS: Run-flat tyres mean a harsh, bumpy ride and an SUV that simply won’t settle down on a bumpy road, lacking composure and making for a busy, fidgety experience for all occupants. It’s a serious letdown for an otherwise strong package.

THE WHEELS REVIEW
BMW reckons that it had it right with the first X1, but marked itself an honest ‘could do better’. So this all-new second-gen brings far more handsome shrunken-down-X5 styling and a raft of new features, underpinned by the same front-drive architecture as the 2-Series Active Tourer and latest Mini. 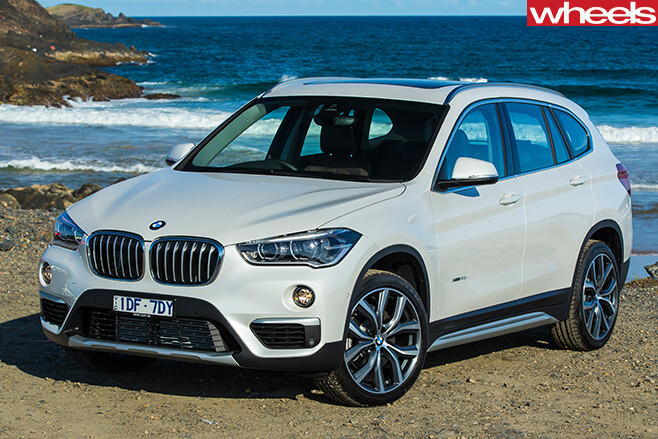 The front-drive platform has enabled the X1’s engines to be mounted transversely instead of the previous model’s longitudinally positioned units, and that’s freed up Aussie-born designer Calvin Luk to alter the proportions drastically. That formerly ‘wasted’ space up front has been shifted to the rear of the X1, with a shorter bonnet and better balanced, more aerodynamic (if less distinctive) shape.

The wheelbase is a whopping 90mm shorter, but overall length’s cut by only 15mm, with growth in width and height creating loads of space up front and impressive rear legroom – the latter up by 66mm. The 505-litre boot tops its mains rivals’, and that greater space is also cleverly flexible thanks to second-row sliding seats.

Cabin quality is also noticeably improved as part of a sharp interior that conforms to other familiar X-badged cars, with a dash of much-needed flair in the form of a wraparound centre console. Fit and finish is excellent, arguably as the X1 is the only X-car made in Leipzig, Germany, not North America. 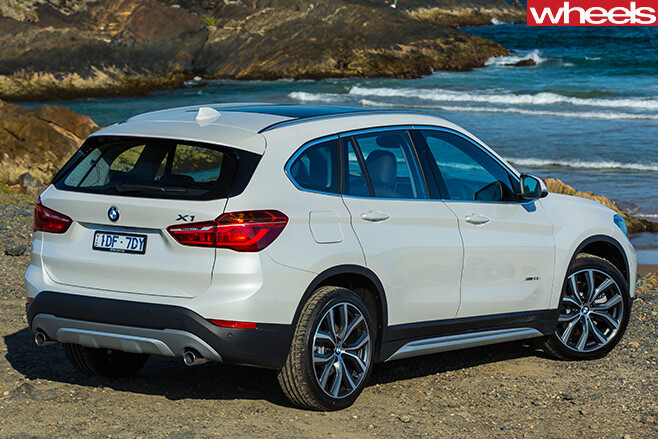 The new 170kW/350Nm petrol engine we’re driving here is standard in the flagship xDrive 25i, which replaces the previous 28i model. While there’s 10kW less power, the 25i has the same 350Nm and matches the 28i’s 6.5sec 0-100km/h claim, but improves its economy figure by 0.7L, down to 6.6L/100km. It’s a smooth engine that’s more willing in its power delivery than punchy and athletic, with commendable refinement and even a subtle rorty note when pushed. It’s mated to a smooth-shifting Aisin eight-speed, with wheel-mounted paddle-shifters.

Yet a firm, fidgety ride lets the X1’s overall performance down on Aussie roads, with excessive tyre noise from the 19-inch Bridgestone run-flats. The X1 is upset by the smallest of bumps, with reverberations through the wheel, and takes far too long to settle, bringing uneasy head toss. Switching to a lower-spec 18-inch shod X1 didn’t solve the ride issues either, and showed that it’s not worth optioning the top model’s Sports Steering, but it is worth paying $750 for sports seats, as the base car’s are far too flat. 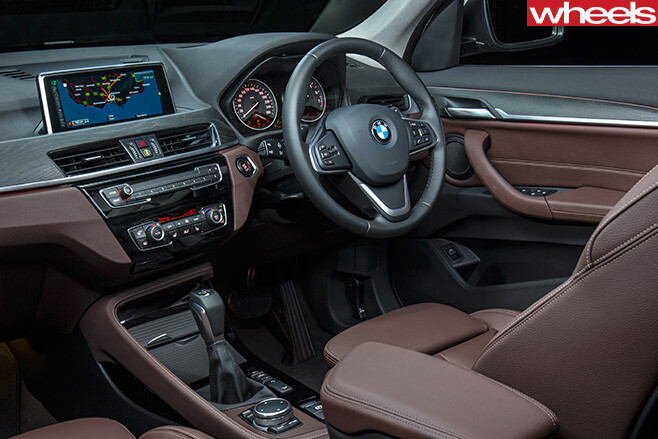 The X1 is a vast improvement, but still falls down in terms of dynamics despite sharing its platform with the Mini, a car clearly capable of a more involving, comfortable drive. Better looking, far roomier, faster and more efficient – as well as its improved value – means it is a strong contender if BMW can get the ride sorted once adaptive damper cars arrive in December. Fingers crossed they can cope with Australia’s often poor excuse for roads.

AUSTRALIA’S SUV habit means that the X1 is crucial to BMW as it chases Mercedes and has Audi climbing up its back in the sales race, AFL-style. The original X1, oddly shaped and codenamed E84, arrived in 2009 and has since accounted for a third of BMW’s total X-car sales globally. It trails only the X5 in BMW’s SUV sales charts, the first of its X-cars that kicked things off in 2003. Since then, the range has blown out to X1, X3, X4, X5, X6 and – come 2018 – the X7, which will share its platform with the uber Rolls-Royce SUV. Will we ever kick the habit?