WHAT IS IT?
Designed and developed in Australia among other places, the Ford Everest will partially fill the gap left with the departure of the Territory while also taking on the likes of Toyota’s popular Prado 4x4.

WHY WE’RE TESTING IT
This is the closest thing we’ve ever had to an Australian-made four-wheel-drive wagon, even though it’s manufactured in Thailand. Much of the engineering was done by Ford Australia alongside development of the Ranger truck. 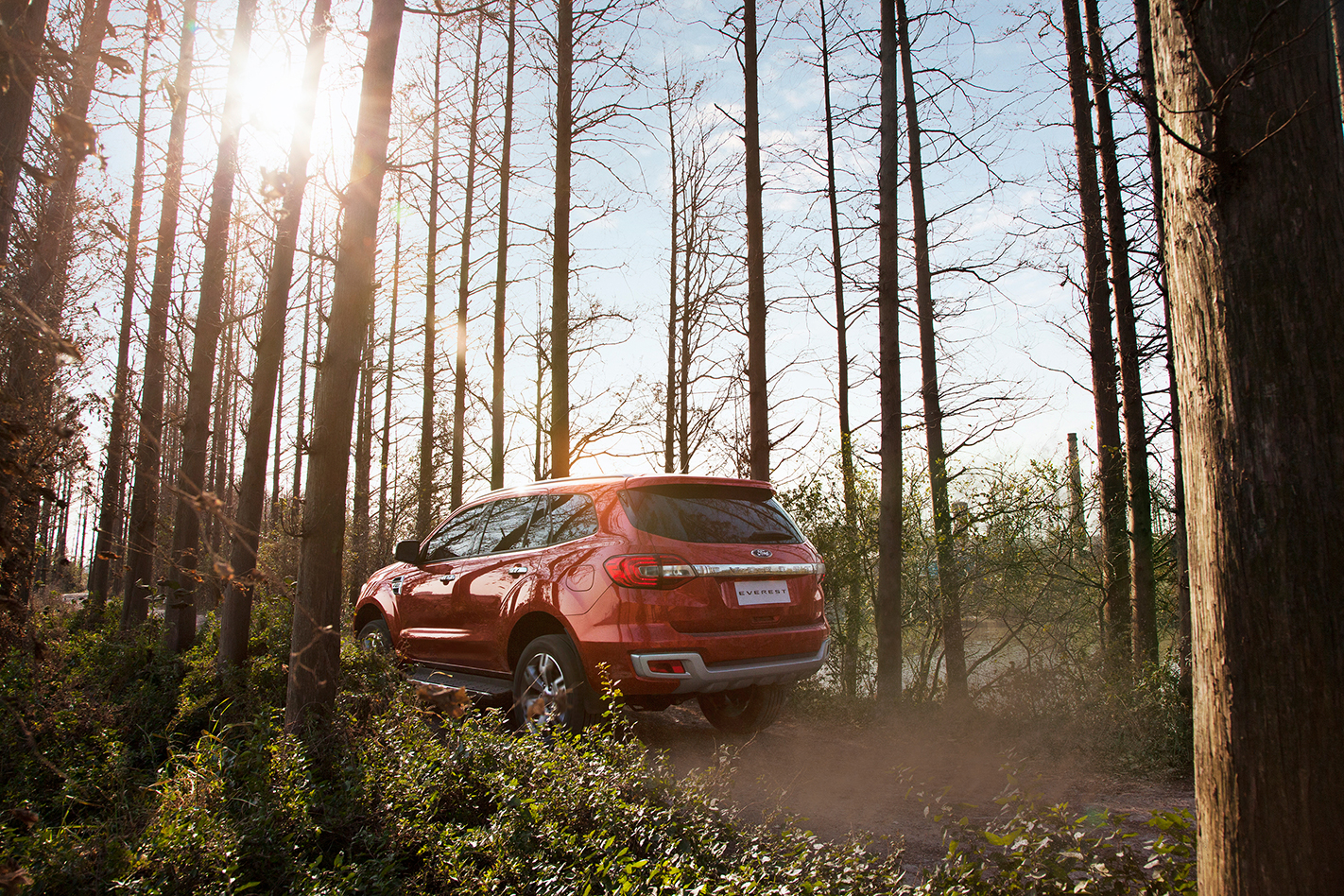 MAIN RIVALS
Toyota Prado – The Prado continues to buck the trend toward soft-road SUVs by outselling its Kluger stablemate, even though it is less refined and more truck-like. The Everest could be the first real challenger to the Prado’s throne.

Toyota Fortuner – Toyota is covering its bases here, introducing another seven-seat 4x4 wagon around the same time as Everest lands here. Smaller and cheaper than the Prado, it will form a rear-guard action against the new Ford.

Isuzu MU-X – Old-school, simple, functional and affordable, the often-overlooked MU-X is a quiet achiever in this segment and is the smart choice for those who can’t afford a Prado. 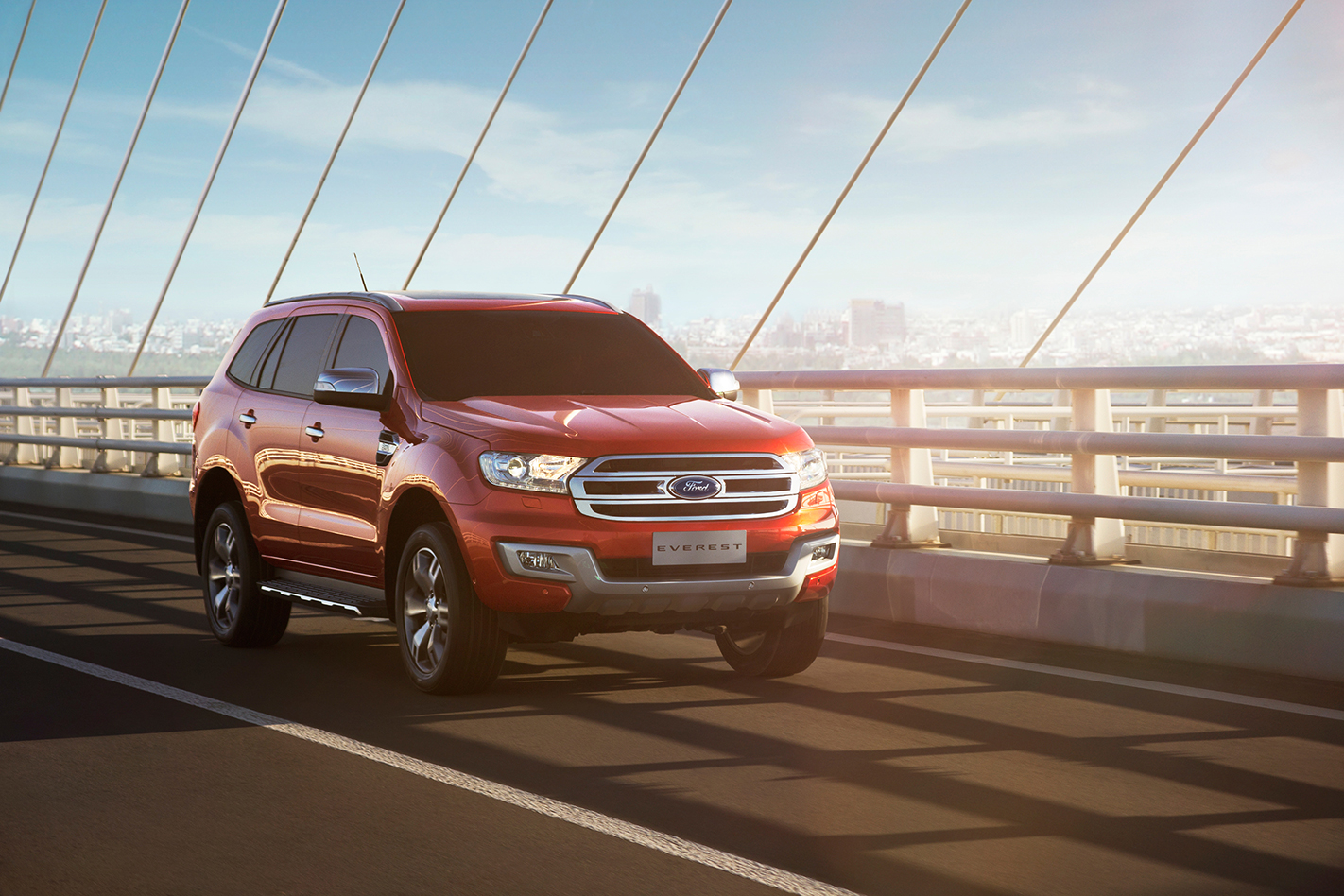 THE WHEELS VERDICT
PLUS: On- and off-road ride and comfort; cabin refinement; clever use of tech
MINUS: Lack of steering-wheel reach adjustment; centre-row seat headroom

THE WHEELS REVIEW
THE Everest is the culmination of a long gestation period of developing a wagon off Ford Ranger’s T6 chassis/platform. It’s also Ford’s short-term replacement for a seven-seat SUV once the Territory ceases to exist at the end of next year.

Everest is not expected to be the only vehicle to fill this role as it is a light truck-based SUV as opposed to the passenger car-derived Territory. Ford’s American-made Edge SUV is expected to complete a two-pronged Territory replacement strategy. 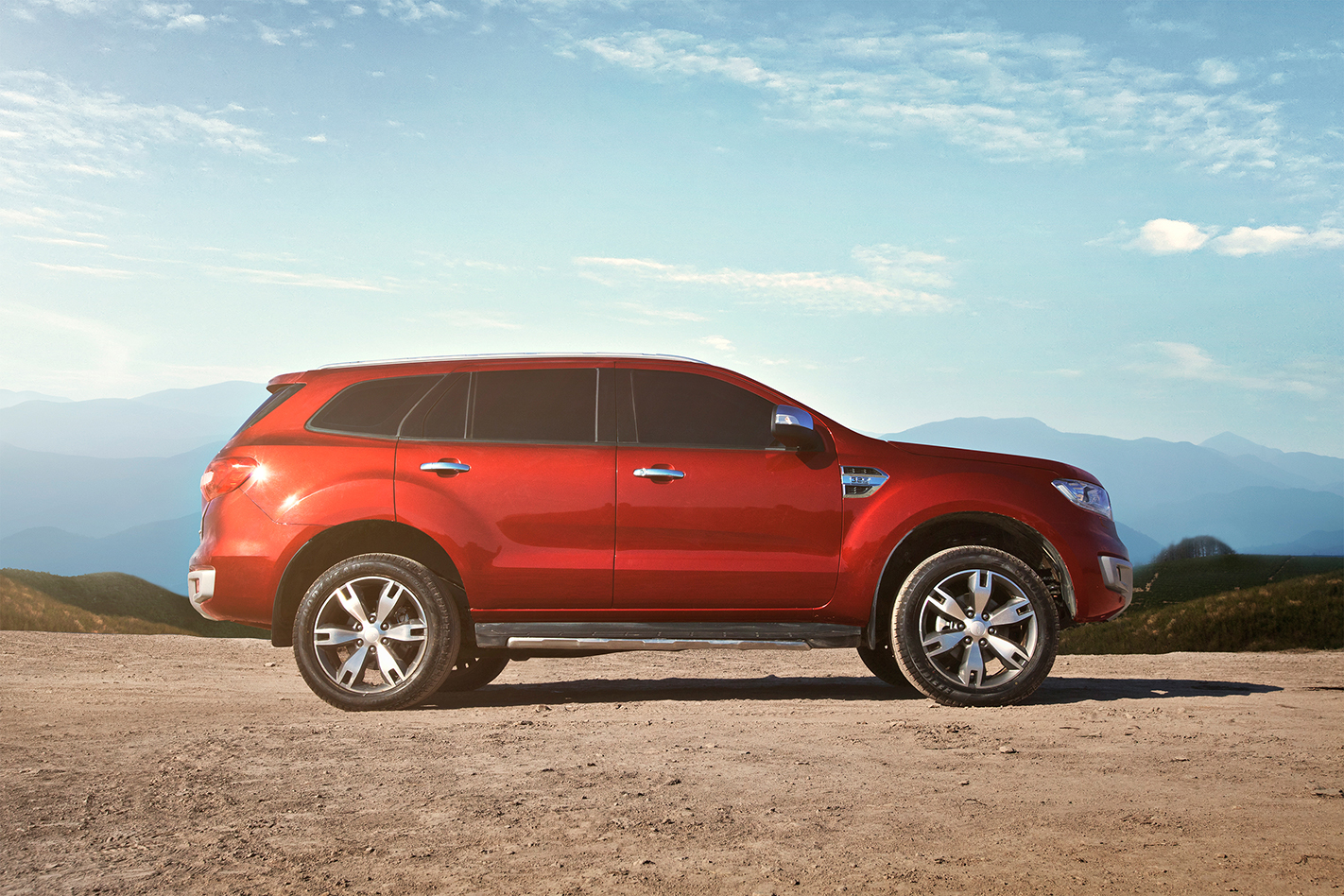 Everest should not be considered a replacement for the Australian-made Territory. It can’t deliver the on-road dynamics and passenger-car comfort of the Falcon-based SUV. What it does bring is a broader spectrum of ability, adding true off-road capability, durability and a 3000kg towing capacity.

Ford has done well to engineer refinement and functionality into a light commercial vehicle-based wagon. The Everest wagon employs a multi-link, coil-sprung rear suspension in lieu of the Ranger’s more commercial leaf springs.

This set-up incorporates a Watts link for lateral location of the live axle to improve on-road characteristics, a system that was successfully used on Falcons for many years. While by no means a modern design in terms of passenger cars, it provides a good compromise between what’s needed on and off the road. It better controls the rear end, taming the usual tendency to move around over irregular surfaces and under lateral dynamic loads. 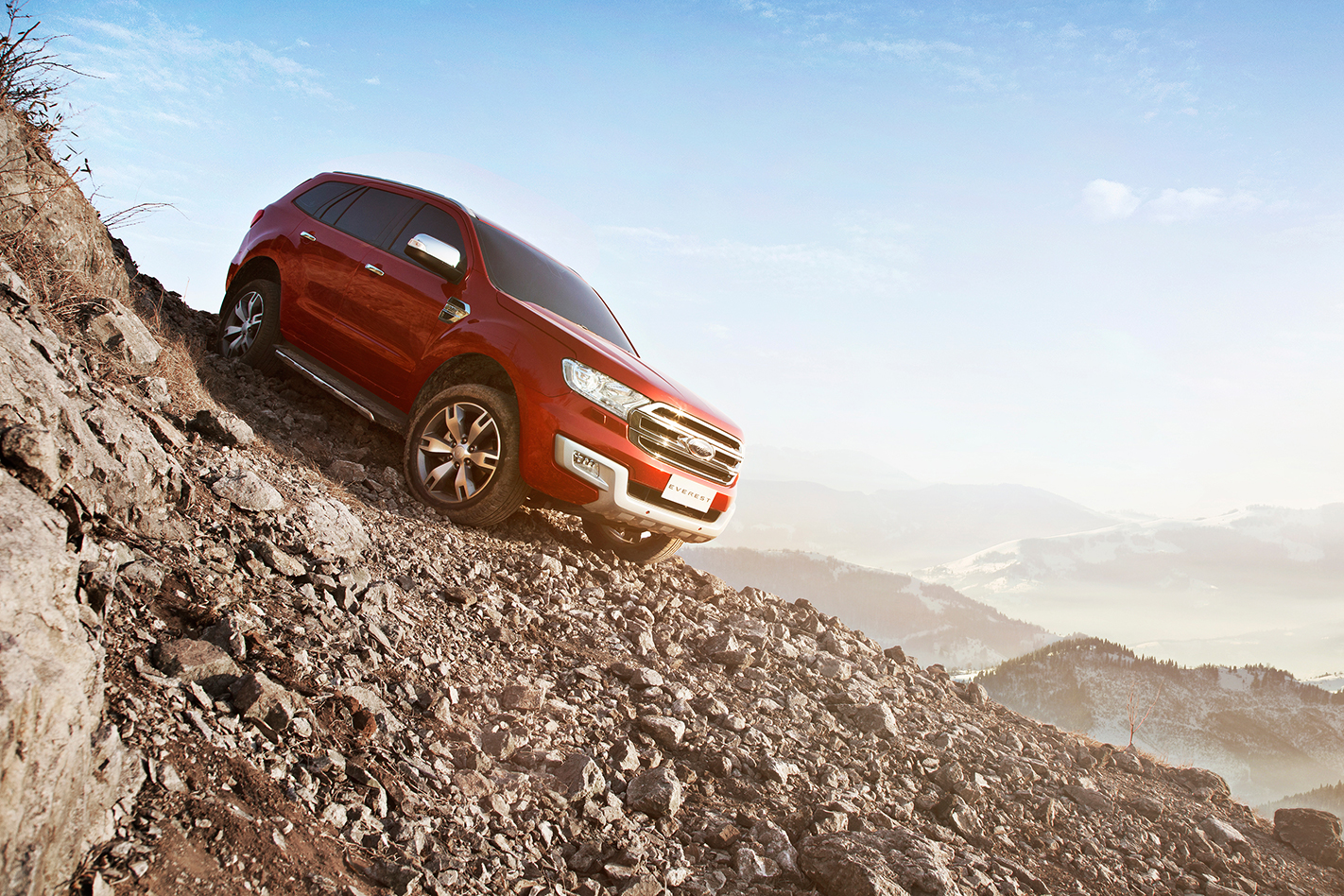 On our drive in rural Thailand, the seven-seat wagon sits relatively flat and is composed over twisting roads with poor surfaces, so it should work well on our likewise crook roads in Australia. It exhibits much less roll and pitch than the rival Prado.

The electric-assisted steering is light at low speeds where you want to it be and firms up at speed, although it doesn’t give the same connected feel of hydraulic power steering.

Everest’s separate chassis helps isolate the body from road NVH even on the low-profile 20-inch tyres fitted to these test vehicles. Top-spec Australia Everest Titanium models will also ride on the 20s while the mid-spec Trend gets18s and the base Everest more comfortable 17s. 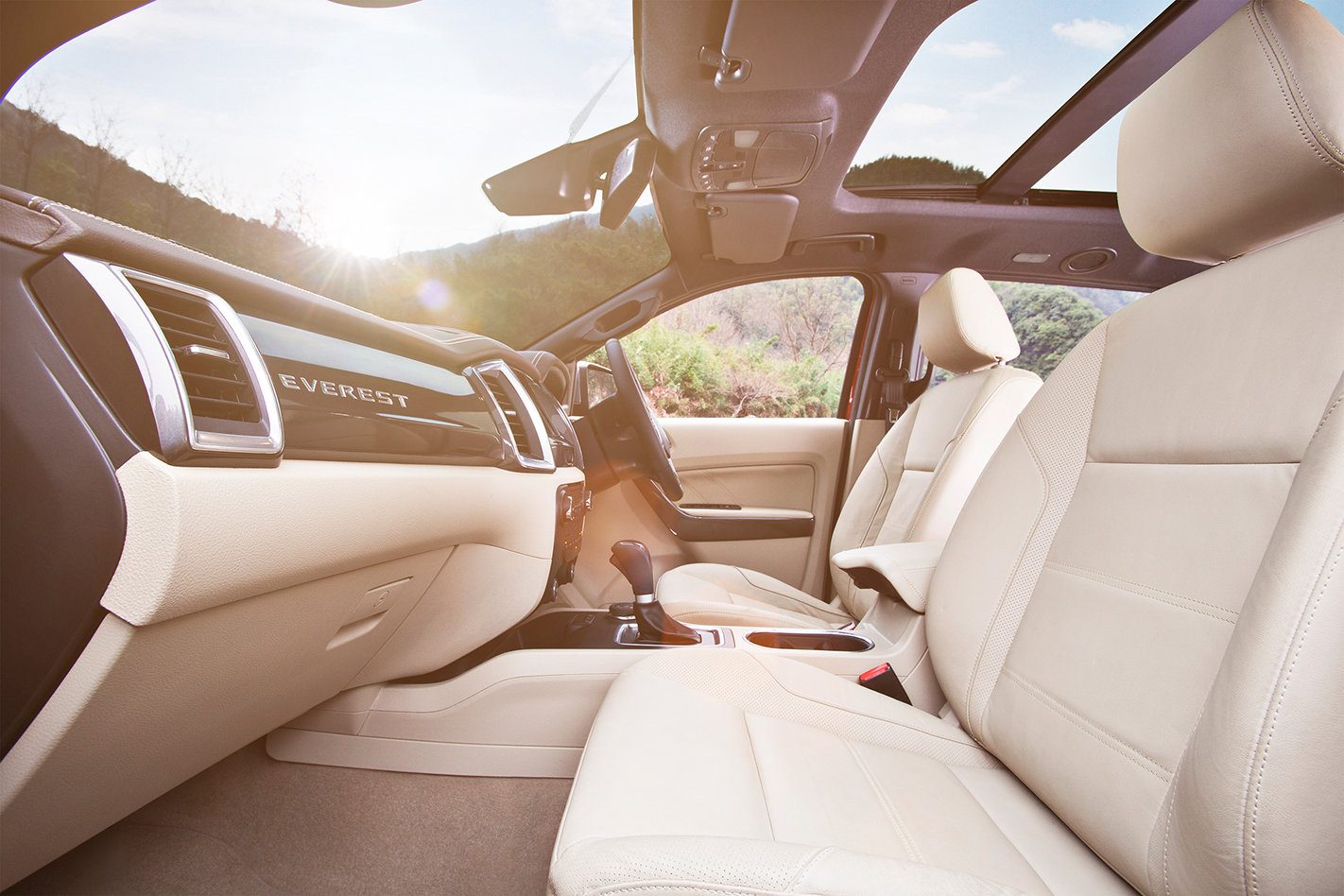 The interior is clever, practical and functional. The centre and rear rows of seats fold flat to offer cavernous cargo space. In Titanium spec, the third row seats individually fold electrically at the touch of a button from the rear door opening.

Head room in the back seats is limited by the sculptured roof lining that houses ducting for rear air vents. Notably absent are keyless entry/start and reach adjustment for the steering column, which may inconvenience taller drivers.

Cabin refinement is aided by Active Noise Cancelation that, like similar technology in high-end audio headphones, transmits an opposing ‘sound’ to the cabin to cancel out ambient noise. This includes the sound of the diesel engine, where the low-frequency growl has been targeted. 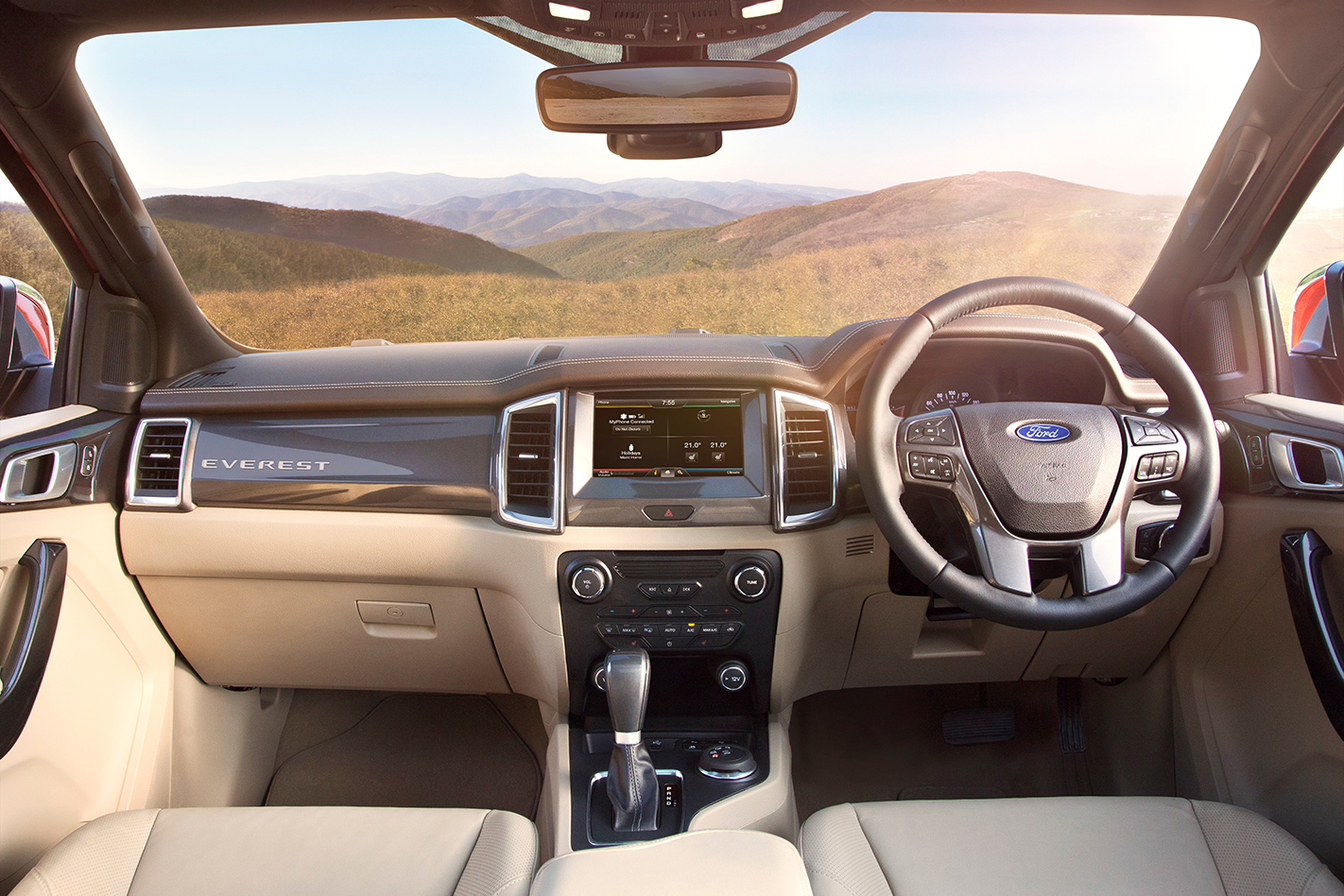 The five-cylinder 3.2-litre turbo-diesel will be the only engine offered in Australia and, although carried over from Ranger, it has been refined with new fuel injectors operating at higher pressure to reduce diesel-clatter. It has been tuned to meet Euro 6 emission standards, as required for passenger vehicles, and consequently produces 4kW less than in Ranger, though torque is unchanged. It’s ample to keep the hefty wagon on the move, aided by a positive-shifting six-speed automatic transmission. There are no shift paddles, but the transmission can be manually operated using the floor shifter.

All Australian-spec Everests will be 4x4, for now at least; 4x2 is available for other markets and isn’t being ruled out for us down the track.

The full-time 4x4 system is aided by a clever Multi Terrain Selector that offers four driving modes: Normal; Snow, Mud, Grass; Sand; and Rock. These are designed to make it easier for novice off-road drivers to manage different conditions. Low-range gearing, a locking rear differential, hill descent control, and an 800mm wading depth add to Everest’s off-road capabilities, although we weren’t able to put them to the test on this drive. 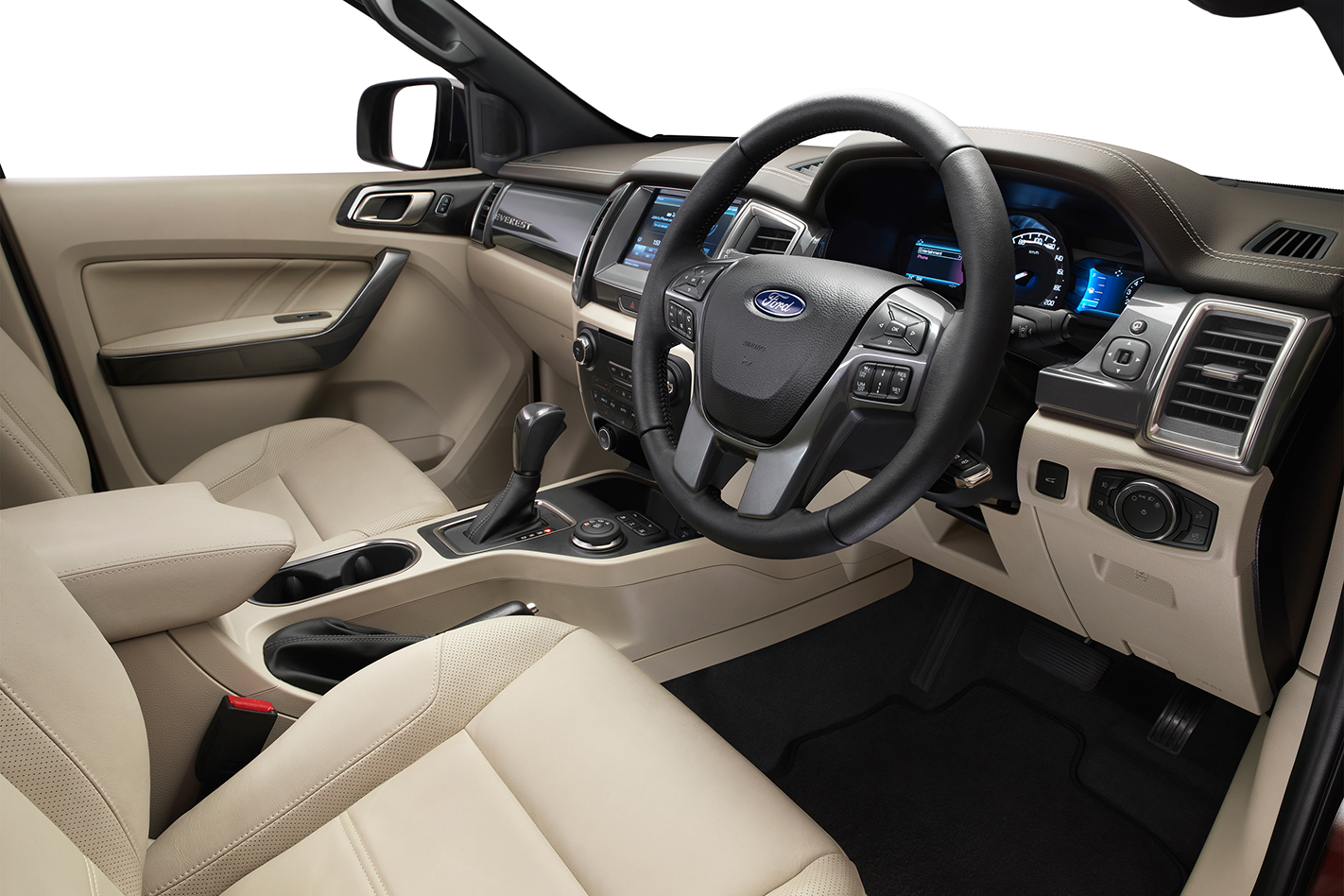 The drive did show us that the Everest will be a smart choice for family buyers looking for a 4x4 wagon with a good mix of on-road refinement, performance and all terrain ability.