A bigger, more powerful and more vocal V8 for the VF Series II Commodore makes it a fitting send off for the most popular Holden nameplate ever.

WHAT IS IT?
The last major update for Holden’s locally-produced Commodore, in this case the most driver-focused, top-spec V8 version. This is the car that will see the real Commodore out.

WHY WE’RE TESTING IT
To experience the most powerful V8 that’s ever been fitted to a non-HSV Holden. The new LS3 6.2-litre is all about “making the lion roar again” according to Holden, and we wanted to see if it lived up to its claim.

MAIN RIVALS
Ford Falcon XR8 and Chrysler 300C SRT8. HSV Clubsport would also usually be in the mix, except it’s taking a temporary holiday. The Falcon XR6 Turbo – and rumoured Sprint model – is also on the shortlist. 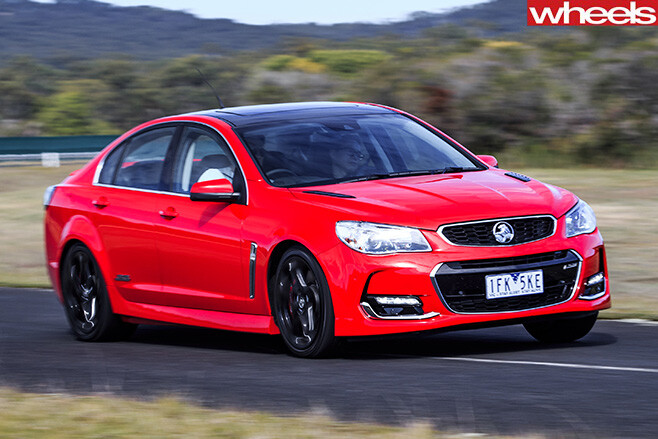 THE WHEELS VERDICT
The Commodore VF II was always going to be good, with the hearty LS3 V8 pumping away in SS models, but we never expected such an awesome soundtrack. Throw in fantastic dynamics and a spacious, value-packed body and the SS-V Redline summarises perfectly what we'll miss after local manufacturing finishes in 2017.

PLUS: V8 noise; V8 performance; brilliant balance and grip; practical and comfortable
MINUS: Increased fuel use; interior busy in some parts; rear seat attention to detail

MAIN RIVALS
IT’S ALL ABOUT the noise with Holden’s new VF II Commodore. Well, mostly. The addition of the LS3 6.2-litre V8 brings with it a snarl and bark no Holden has come close to for more than a decade.

The newfound lungs are topped off with crackles and rumbles on the overrun. It’s a beautiful thing. Some would say you have to go back to the locally produced 304/308 engines to experience a similarly tantalising tenor.

Loud, too. Tramp the throttle and there’s enough of a deep, guttural roar to momentarily halt conversation in the cabin. It’s a wonderful, old school thump where you can just about hear each cylinder firing enthusiastically within the sizeable alloy block. Rather than the synthesised noise increasingly common in modern performance cars, Holden has gone old-school with the V8 models that are the heroes of the VF Series II update. Some flexible black hosing joins the intake chamber with the firewall, with a disc in its centre housing a rubber diaphragm that allows only the desired frequencies into the cabin. On the exhaust side it’s even simpler, thanks to the Baillie Tip – named after the engineer who designed it but died of leukaemia months before Series II went on sale. It uses carefully placed holes to direct some of that exhaust thrum north into the boot cavity.

Simple, and the sort of thing we’ll miss once Holden packs up its manufacturing shop at the end of 2017.

Even better is that the SS-V Redline does not drone or boom when cruising. It’s impressively refined on light throttle, albeit never completely hiding the fact there’s eight of the best beneath the bonnet.

Holden has also fitted a bi-modal system that opens a flap in the exhaust to further amplify that glorious muscle-car sound – the sound that will disappear when the Commodore ditches its V8 option with the imported model from 2018.

The VF II V8 also goes hard, not so much thanks to the 304kW – it’s absolutely appreciated, especially the way it revs cleanly to 6600rpm – but the 570Nm. 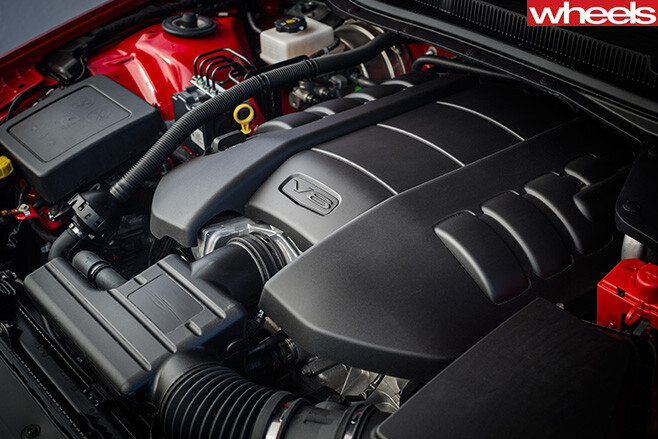 That torque peak occurs up at 4400rpm, but even below 2000rpm there’s plenty to play with. Sixth gear at 1500rpm up a hill? Not a problem: the SS-V gradually winds the speedo clockwise. Similarly, third or fourth gear out of an intersection – where the engine is hovering just above idle – and it’s a deliciously forceful affair.

The shorter final drive ratio helps – the manual has dropped from 3.45:1 to 3.70:1, and the auto from 2.92:1 to 3.27:1 – ensuring the Redline is suitably pokey in any gear. The carryover six-speed manual has the trademark direct feel, with a relatively short shift.

Engineers have also taken to the handling of the Redline. The wider stabiliser bar (it’s 500mm longer) unique to the flagship model teams with softer rear springs on the FE3 suspension setting, allowing better compliance on rough surfaces. There’s still some low-speed fidgeting, but the body movement is beautifully controlled, especially at higher speeds.

Launch hard out of corners and the tail squirms but squats in a purposeful yet predictable way, with loads of grip from the Bridgestones that channel that luscious V8 energy. Optional 20-inch hoops are mostly about the look, with grip similar to the standard 19s.

Inside, the Commodore is unchanged. Nicely supportive front seats ensure long-distance comfort, and there’s great adjustability to the driver’s pew. 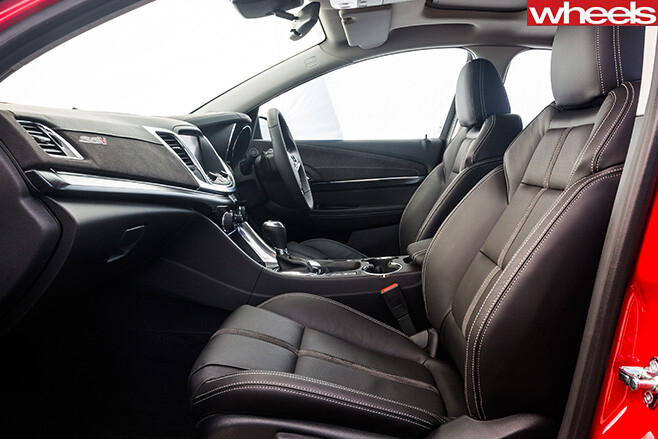 Commodore bugbears remain. There are the non-adjustable rear headrests, and the thick A-pillars that block cornering vision. The breadth of materials in the cabin makes it visually busy: there are matte metal-look, shiny chrome, fake carbonfibre, Alcantara suede, perforated leather, shiny black plastic and grained grey plastic, along with some stitching to mash it all up.

Still, as a celebration of V8 Commodore performance the SS-V Redline is a bullseye. Fast, fun, immensely accomplished and brimming with character. The clock’s ticking…