Living in a country so crowded that you have to prove you can park a car somewhere before you’re allowed to buy one must have its pitfalls.

But on the plus side, Japan has kei cars – like this stunning little S660, which is so small you don't need to park it anywhere, just shove it under the bed.

WHAT IS IT?
Honda is a brand desperately in need of some joy – and some two-door sports cars. In Japan at least, the S660 fits the bill, and provides an entry in the excellent kei class, which has strict conditions on size, output and even top speed. This replacement for the Honda Beat uses an improved version of the same three-cylinder engine, with just 660cc. It’s not big on power, or big on anything, but it is huge amounts of fun, like a smile on wheels.

Hit 134km/h in the S660 and it just sits there, electronically governed from going any faster. But oh what fun it is getting there, as long as you’re small enough to get into the car in the first place. The steering wheel is the size of a donut, and just as sweet to have in your hands.

WHY WE'RE TESTING IT
Because it’s such a brilliant example of what Honda can do when it has its non-sensible hat on for a change, particularly the manual gearbox, which brings to mind the S2000 and Integras of old. And because it’s the kind of car we’d love to see sold in Australia, and everywhere, because it’s such a perfect first vehicle for L and P platers. It proves you don’t have to be going fast to enjoy driving, something a lot of teenagers would be wise to learn. MAIN RIVALS
Toyota’s SF-R concept is clearly aimed at the S660, or will be if they actually make it. Otherwise you’re looking at a Mazda MX-5 for a philosophically similar approach to a lightweight roadster. Compared to the Honda, of course, the MX-5 looks like a cruise ship next to a dinghy. A skateboard might be a more realistic rival for the S660.

THE WHEELS VERDICT
Honda has been out of the sports-car segment for too long. Thankfully the NSX is about to change that, but at the more realistic end of the market this little belter of a roadster, which can be yours for less than $23,000 in Japan, is a reminder of how good they are at making fun cars, and how great light, small roadsters can be. Simplicity, purity and design genius, it really is a very Japanese car, and we wish we could own one.

PLUS: Light weight and tiny, it’s a hoot to throw around; willing but not particularly frightening engine; fabulous design; a pure sports car; fantastic manual gearbox.
MINUS: May struggle to get up hills, particularly if there are two of you on board; not for anyone even moderately tall; not available outside Japan.

THE WHEELS REVIEW
THE car industry is deeply frightened by the fact that young people aren’t buying their wares, or even getting their licences, in the numbers they used to. Perhaps this is because they’re not building enough cars like the Honda S660.

What 17-year-old, of either sex, wouldn’t lust after a car as cool and fun as this? The S660 roadster, particularly with the short-shifting, super-slick six-speed manual gearbox, is a car that reminds us of how great Hondas used to be, before someone in charge nodded off at the wheel and woke up having lame Earth Dreams.

Sadly, this two-door coin-pocket rocket is a Japan-only kei car, built for their domestic market as a replacement for the similarly cute Honda Beat and powered by an improved version of the same three-cylinder turbocharged engine of just 660cc capacity and 47kW output.

It’s not a lot of power, obviously, but then this diminutive diamond of a car weighs just 830kg - which makes the weight of the driver, and passenger, a major consideration in how fast it will get to 100km/h. And it is just 1.18m high, 1.47m wide and 3.44m long. American supermarket trolleys are bigger.

Anyone of even slightly above average height will need to drive with the roof off, and genuinely tall people will feel the wind in the hair of their eyebrows, but if you’re of a more manageable size the cabin is comfortable enough, once you wriggle into it.

Once at the wheel, the joy kicks in as this tiny, mid-engined sports car wraps itself around you and makes you smile like a teenager with a new iPad. 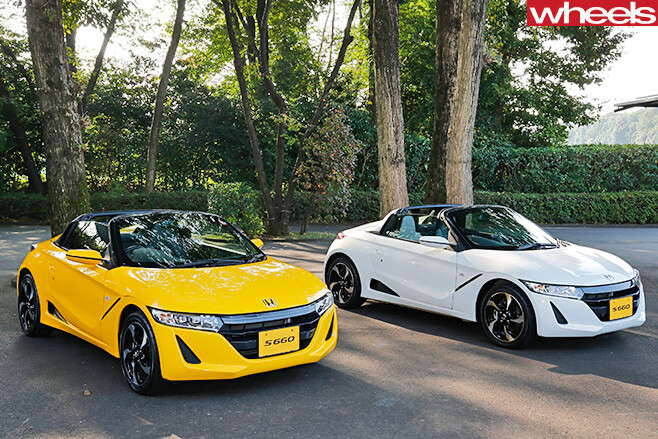 The S660 has character, loads of it, as well as a ringing, singing little engine that sounds like its voice hasn’t quite broken yet, and a wheelbase that’s so short, at 2.2m, it makes a go-kart feel cumbersome.

Winding it through the gears is a hoot (a CVT with paddles is available, but 57 per cent of sales in Japan are manual), right up to the point where the 134km/h kei-car speed limit kicks in.

With so little weight and such dinky dimensions, it stops, turns and involves its drivers like very few cars you’d pay twice as much for (at current exchange rates it’s just under $23,000 in Japan, but there’s a waiting list out to June).

It would also be an absolutely fantastic first car for any L or P plater, because it’s never going to overpower them, and it’s so basic and almost retro in feel that you get a sense of being involved in driving that’s disappeared from a lot of modern vehicles.

In Japan, at least, the next generation has no excuse not to fall in love with the car.