WHAT IS IT?
Mazda’s sole commercial vehicle, which plies its trade in the 4x2 and 4x4 utility segments.

WHY WE’RE TESTING IT
The current-generation BT-50, launched in 2011, has been given its first update.

MAIN RIVALS
Lots of them, including well-known nameplates such as the Ford Ranger, Holden Colorado, Volkswagen Amarok, Mitsubishi Triton, Nissan Navara, Isuzu D-Max … and a certain Toyota called the Hilux. THE WHEELS VERDICT
The BT-50 family gets serious with design and features. Just don’t mention the twin.

THE WHEELS REVIEW
IT SEEMS that while dual-cab utes continue to increase their popularity as dual-purpose transport for families, buyers nevertheless prefer they don’t look too car-like.

Mazda admits the styling of its BT-50 has been a little bit on the nose with Aussie customers, so has aimed to toughen it up as part of its first update since 2011.

It has wiped the smile off the BT-50’s face by straightening the grille section. Same-shape headlights adopt darker sections, to emphasise the meaner expression (with a new selection of steel and alloy bullbars available for optional extra aggression).

The taillight design is unchanged but a switch from clear to dark red lenses for the surrounds is a subtle but effective improvement. Inside, the BT-50 Dual-Cab’s mid-grade XTR and top-spec GT continue the ute trend to more closely mimicking passenger-car interiors by replacing the previous 5-inch infotainment display with a 7.8-inch touchscreen. Throw an extra $295 at your Mazda dealer and the sat-nav will incorporate maps from 4WD cartography specialists Hema.

All three trim grades, including base XT, gain some extra equipment in return for either no extra cost or a minor price increase.

A rear-view camera – incorporated into the rear-view mirror – is now standard on the XTR and GT, and an $820 option on the base XT. That’s a spec advantage over the Ranger, where the feature is standard only on the flagship Wildtrak, though the Ford counters with rear sensors on all but its base dual-cab. 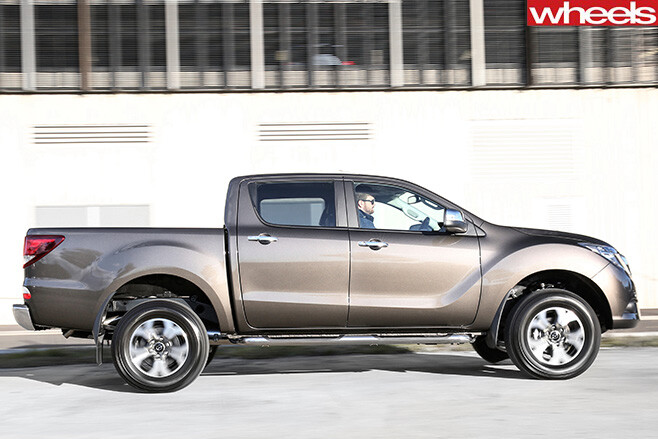 Otherwise the BT-50 slots under the mild facelift category, with no mechanical changes.

Mazda decided against adopting the Ranger’s new electric steering, so the BT50’s heavier set-up isn’t as effortless around town or during tight manoeuvres.

The weighting comes into its own on the country roads where these vehicles spend much time, combining with the steering’s linearity to create a relatively car-like driving experience.

You wouldn’t expect your average monocoque-based SUV to roll in the bends or shimmer over mid-corner bumps like the BT-50, but in the context of ladder- chassis dual-cabs the Mazda feels sufficiently planted on the road and remains among the class best for handling.

And like virtually all of its peers, the Mazda has the requisite tools for serious off-roading if you choose the 4x4 version – including descent control, lockable rear diff (also on 4x2s), and transfer case with low range. When it comes to loading equipment – or whatever else – into the BT-50’s tray, it can handle some of the highest payloads in the segment. (And it shares class-leading towing capacity, with 3500kg.)

When it’s unladen, though, Mazda’s intention to inject some ‘zoom zoom’ into the BT’s suspension is particularly noticeable, with a ride that gets busy on lumpy bitumen and is generally not as comfortable as the Ranger’s – whether you’ve opted for a single cab chassis, Freestyle cab-chassis/cab utility or (biggest-selling) Dual-Cab.

Of the 23 variants available, the single cab singularly employs a good, if noisy, 2.2-litre four-cylinder turbo diesel, with every other BT-50 benefiting from the stronger and more refined 3.2-litre five-cylinder.

Despite some price increases for the most popular models, Mazda’s ‘one-tonner’ remains keenly priced – especially against its slightly superior, non-identical twin.

This will help among showroom swing-voters, as will the slightly more machismo looks.

Click here to read the full range review of the Mazda BT-50.