WHAT IS IT?
The most powerful, fastest and sharpest Mini in the shed, this is the John Cooper Works edition of the new-generation Mini.

WHY WE'RE TESTING IT
Who would say no to the world's fastest go-kart? The new Mini John Cooper Works is bigger, heavier, yet a dynamic step up on its predecessor. The regular R56 Mini is a much better base to make a hot hatch from, and the new JCW has the biggest engine ever fitted in a series production Mini and should have the chassis to match. 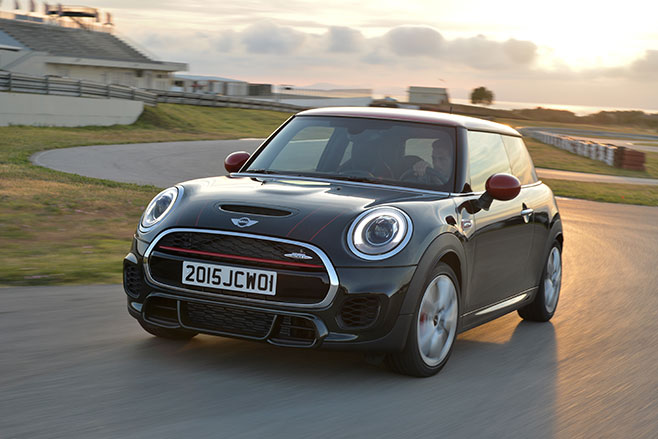 THE WHEELS REVIEW
SPAIN is where low-cost airline-loads of Brits and Germans head to play up and party. So it makes sense that the Mini that promises the most fun is being launched in the sun-drenched throes of life-long mistakes and sore heads.

The 2015 Mini Cooper S JCW is the king of Minis and, ensuring it can take the fight to the VW Golf R, Honda Civic Type R and Renaultsport Megane, this third-generation model is the most powerful Mini to roll out of Oxford. And at $47,400, its starting price is $3K less than the car it replaces.

The big new 2.0-litre turbocharged engine is why the front, which doesn’t look as cohesive or elegant as before, has gaping air intakes that look out of place – almost literally a square peg in a round hole – to cool the donk and larger Brembo brakes. In Mini terms, it may seem like fitting a 7.0-litre V8 into a Jag, or using a fire hydrant to blow out birthday candles, but it’s not so odd given this generation's size increase.

The world will know you're in the supreme Mini thanks to the usual stripes, roof colour choices and standard 18-inch alloys. There's also a chunkier rear, and that cuteness hasn't gone, but the new JCW certainly looks like an oddly decorated Christmas tree compared with its predecessors and rivals. 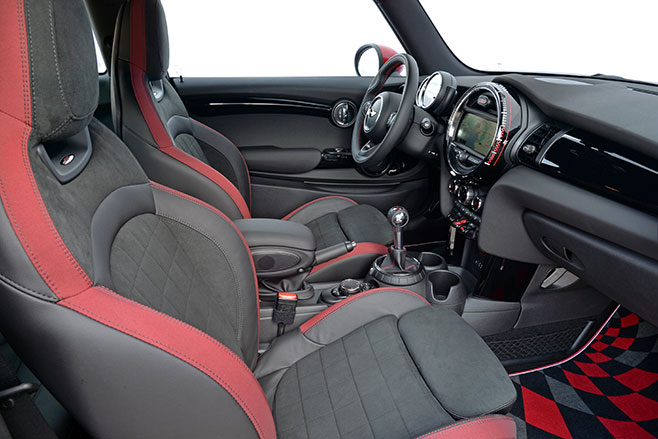 All that's forgotten inside where, like the rest of the new range, it's lost some but far from all of Mini’s iconic boutique charm; for instance, the chrome aircraft switches in the centre remain, though the window buttons are now cheap plastic items on the door, as with the now-doomed Mini Paceman. The funky lighting, excellent surfaces and clever design are all present, and for this speed machine there’s a crisp head-up display.

The driving position is a little compromised; it takes a while to feel comfortable on the firm yet well-bolstered sport seats that have you up slightly too high. Hit Start and the turbo four, which delivers 170kW and 320Nm (up 15kW/40Nm on the previous 1.6-litre turbo), burbles nicely. This is the only new Mini that's not been given a smaller engine, and it has a single, twin-scroll turbo that's cleverly packaged into the exhaust manifold, saving space and allowing it to spool up faster, and it shows when you push the Mini hard.

There’s a snap, crackle and pop as you lash the pedals of the six-speed manual, the 6.3sec 0-100km (6.1sec for the auto) bettering the Golf GTI but far off the Golf R’s 4.9sec effort. Yet the JCW delivers it in an entertaining manner: that sound, maximum torque from a low 1250rpm, and the traction from its electronic diff lock and new launch control system make this one effective hot hatch.

Mini has worked hard to eliminate torque steer, but hasn't eliminated it completely. "If we did that, it would feel sterile," says Lars Weller, the bloke responsible for its driving dynamics. 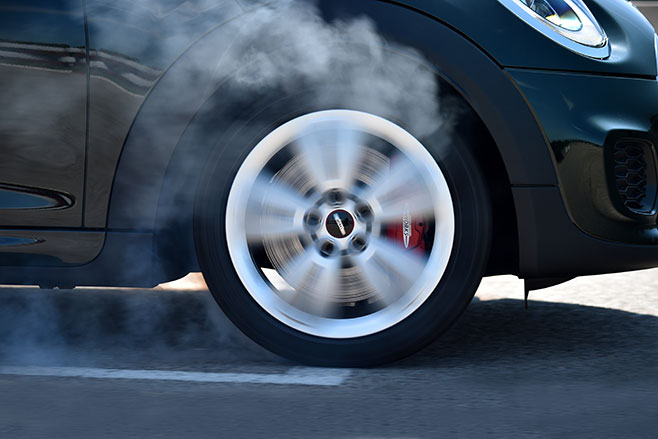 Sterile it ain't. Traction levels are Tarzan-like, with no wheelspin even with the DSC switched off, making the balanced JCW predictable yet fun as it delivers its power to the ground and punches forward, urging you to do so again and again like an exuberant puppy returning a stick. Choose Sport mode and the sharp steering has a delicious gooey centre for great feedback, but is a little quick for the body and hampers change of direction that could be sharpened (leaving room for another track-tearing Mini GP model?).

There's a little dive and squat, and slightly too much body roll, but the roadholding is enough to make it fun without being wallowy. The JCW deals with large bumps quickly and maintains its composure, although our test car ran Pirelli-shod 17-inch wheels instead of the 18s we will get. Also standard in Oz will be two-stage adaptive dampers, again not on our test car.

Those four-piston front Brembos are the biggest single improvement, the JCW staying as composed as a Beefeater when you stomp on the brakes.

A low point is the six-speed manual shift, it's lack of directness making mis-shifts and aimless hunting a regular occurrence. However, the auto's wheel-mounted paddles answer quickly and in manual mode won't change up on you. It’s also faster and more frugal (5.7L/100km being a full litre better than the self-shifter), so it's difficult not to warrant the hefty $2550 premium for the auto.

The 2015 JCW is much more composed and grown up, so it’s a more liveable car around town than before. Remember when these were torque-steering wheelspin factories? Where the JCW was once a wild teenager, this new version is a sophisticated young up-and-comer with sharper manners, yet still knows how to play hard. It's just much better at both. 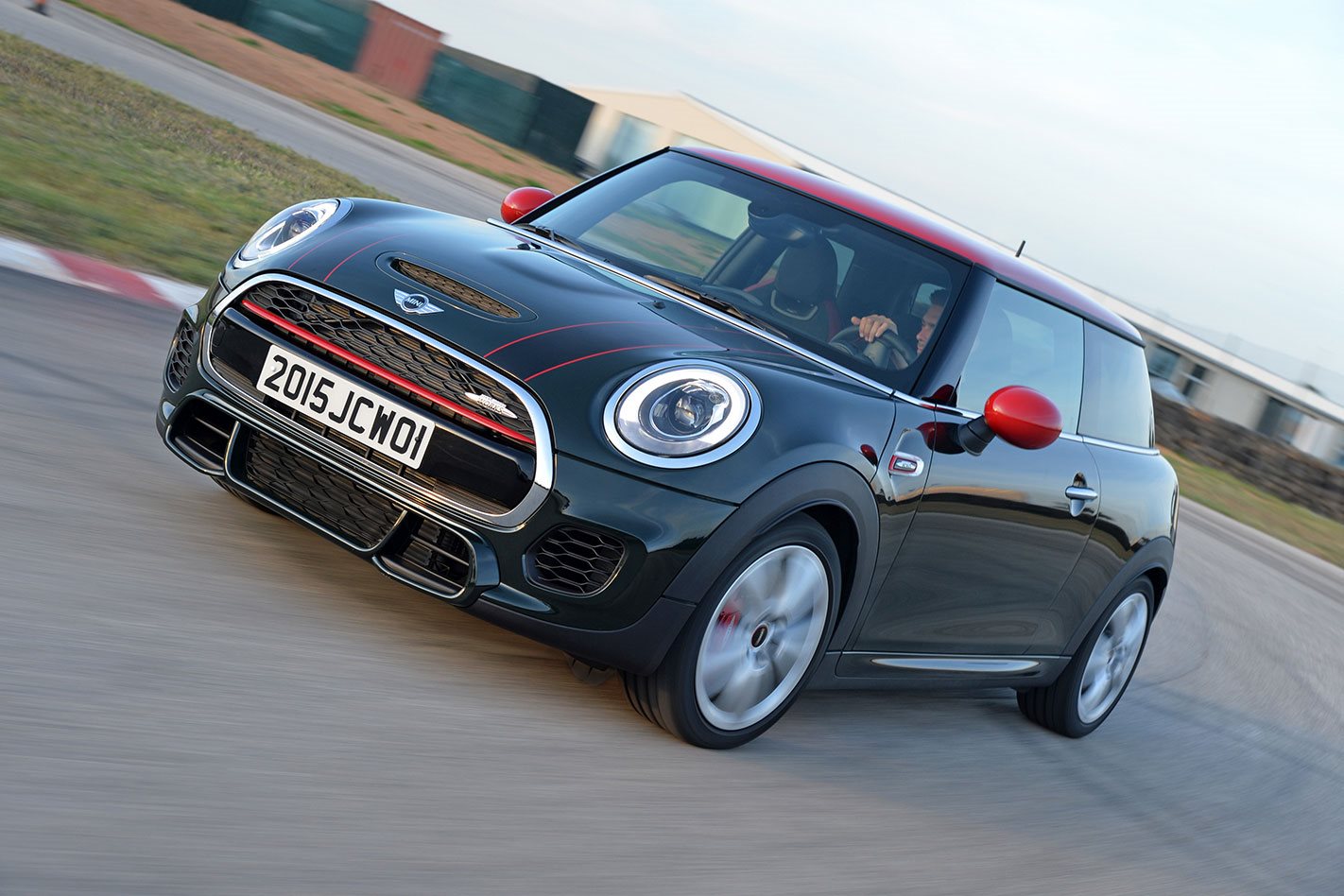 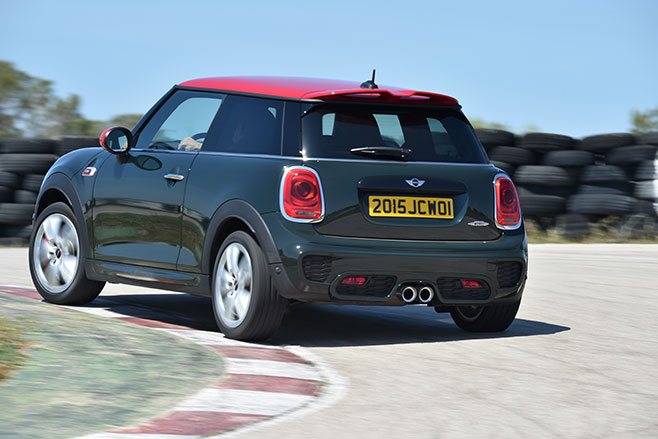 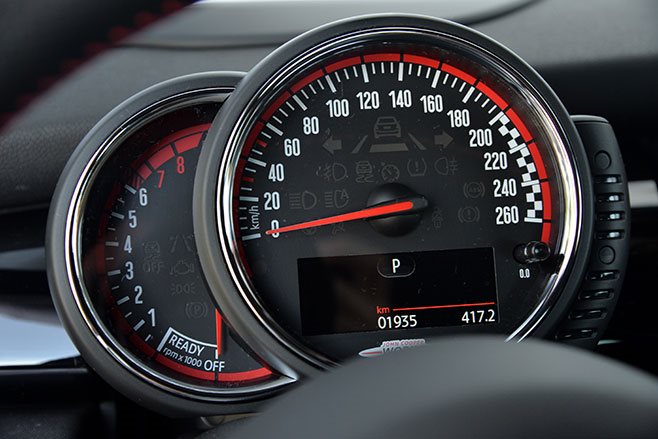 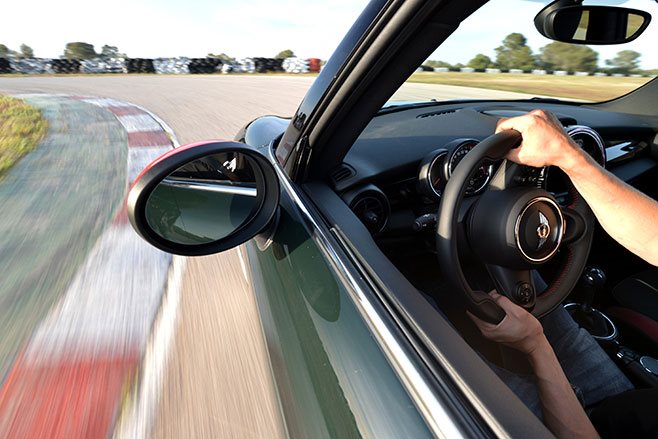 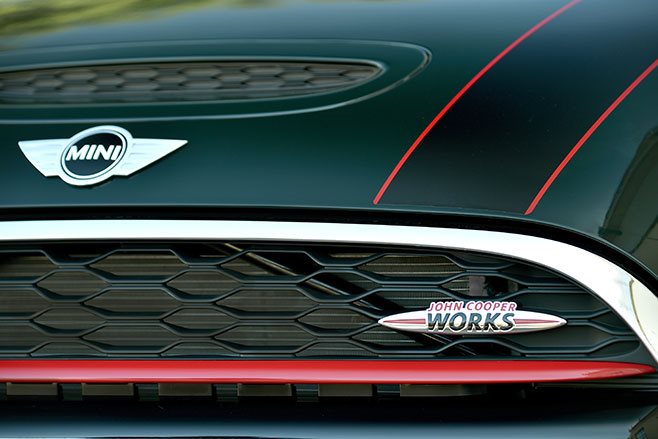 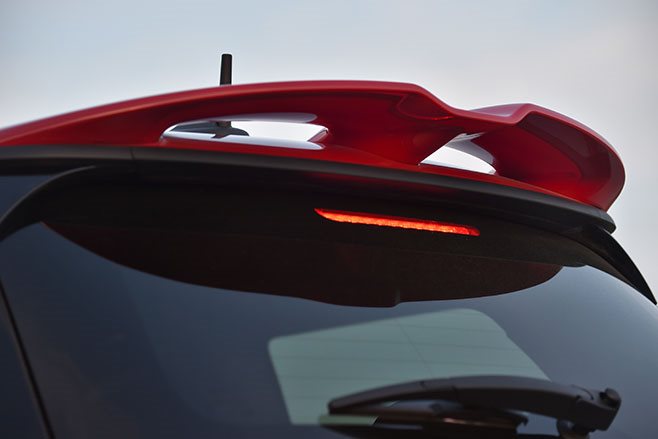 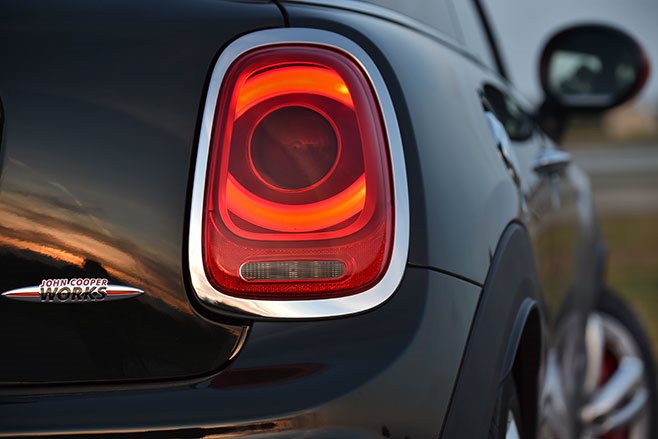