Toyota brings us a seven-seat, off-road capable wagon that’s based on the Hilux dual-cab ute. Is the Fortuner really an enticing alternative to the Kluger and Prado?

WHAT IS IT?
A Toyota Hilux with a wagon body and seven seats. The Fortuner becomes Toyota’s seventh SUV and offers an important diesel and hardy off-road alternative to the more premium, and petrol only, Kluger.

WHY ARE WE TESTING IT?
Fortuner offers a new entry point for buyers looking for a large Toyota SUV but who can’t quite stretch to the more expensive Prado. It promises to be a sales juggernaut, with Toyota predicting it will sell every vehicle it can get its hands on.

VERDICT
More affordable than Kluger and hugely capable off road, the Toyota Fortuner strikes a nice balance between genuine ruggedness and everyday comfort. Highlights include one of the quietest and most refined cabins in its class, but it’s hardly the last word in ride quality or diesel performance.

THE WHEELS REVIEW
IF EVER a recipe stunk of success, this is it. Take one of Australia’s most popular vehicles, the Toyota Hilux, bolt on a more comfortable and refined seven-seat SUV body that’s dripping with a huge dose of Aussie engineering knowhow, and watch it sell like hot cakes.

And so it is with the Toyota Fortuner, a ute-based SUV that Toyota predicts will be so popular it will sell every one of the 6000 it can get its hands on next year. Pitched as a the long-awaited diesel alternative to the petrol-only Kluger, the Fortuner shares most of its underpinnings with the all-new eighth-generation Hilux, which beats it to market by a few weeks.

It shares the same body-on-frame construction, front suspension, steering hardware and rugged under-body protection, as well as the Hilux’s newly developed 2.8-litre 1GD common rail turbo diesel. Two transmissions are nicked from the Hilux as well; a new six-speed automatic and a six-speed manual, with the latter providing an extra point of difference to auto-only Kluger.

So there’s plenty of workhorse DNA underneath, but Toyota has worked hard to cloak the Fortuner’s tradie roots with passenger car comfort and refinement. 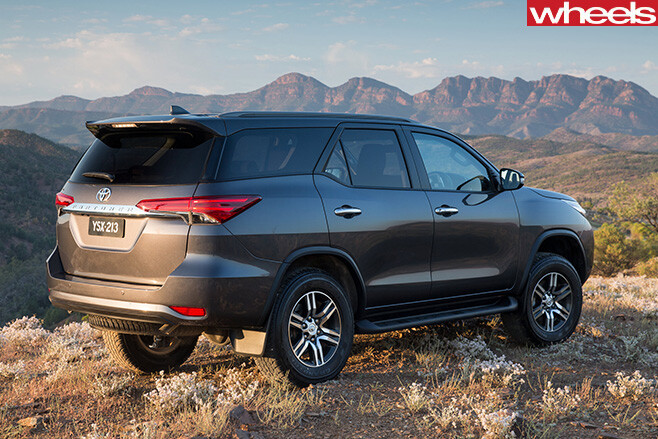 So the Fortuner is a balancing act between everyday suburban comfort and genuine off-road ruggedness, and for the most part it pulls it off.

The spacious interior is quiet and blends soft touch materials with hard, durable plastics. Third-row access is a breeze thanks to one-touch fold and tumble seats. The rearmost pews are no prison sentence either with enough space for occasional adult use, though headroom is compromised. All of this is underpinned by Toyota’s bulletproof off-road reputation, and it’s on the dirty stuff where the Fortuner shines. A part-time four-wheel drive system offers both high and low range, and there’s a locking rear-differential, 279mm of ground clearance and a wading depth of 700mm.

Throwing the Fortuner at a challenging off-road course at the national launch only crystallised the depth of its Aussie-tuned ability, where impressive wheel articulation and approach and departure angles sees it easily master obstacles.

Where the Fortuner is less impressive is on the black stuff. The ride is firm and overly busy and a stiff rear end skips and jiggles across lumpy surfaces. Vague steering is another letdown and feels disconnected from the front wheels at freeway speeds. The new 130kW/450Nm diesel is no tower of power either and while whisper quiet while cruising, can sound gruff under load. Its claimed 8.6L/100km fuel use claim in auto trim (7.6 for the manual) is hardly segment leading. 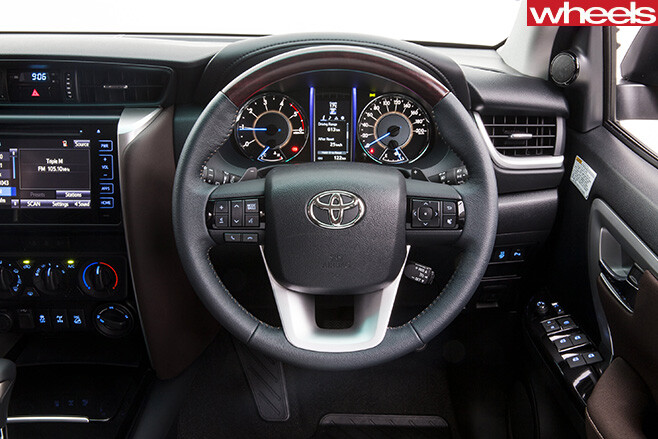 Interestingly, despite the fact the diesel produces 30Nm less (420Nm) when mated to the six-speed manual, it feels torquier and more elastic, with the stick allowing greater exploitation of the donk’s impressive low-down twist.

So the recipe isn’t perfect, with the Fortuner a family-sized SUV that feels more comfortable off-road than on it. Will the less-than-perfect road manners discourage potential buyers? With Toyota predicting 50 percent of the Fortuner’s life to be spent off-road, we doubt it.