Toyota has given the Prado its first all-new diesel engine in nine years. It’s smaller but more powerful than the engine it replaces, and a sixth ratio has been added to the auto gearbox. The unloved petrol V6 has also been tweaked

Toyota has given the Prado its first all-new diesel engine in nine years. It’s smaller but more powerful than the engine it replaces, and a sixth ratio has been added to the auto gearbox. The unloved petrol V6 has also been tweaked.

WHAT IS IT
The Toyota Prado is Australia’s best-selling large four-wheel drive wagon. It’s an old-school 4WD that has genuine off-road ability but does most of its work as a day-to-day family bus.

WHY WE'RE TESTING IT
Toyota’s 150 Series Prado has received its first significant mechanical upgrade since it was launched in late 2009. A 2.8-litre diesel and six-speed auto replace the 3.0-litre diesel and five-speed auto that had been carried over from the previous generation Prado. The new engine brings a modest 3kW power increase but it offers a solid 40Nm of extra torque, with a maximum 450Nm that’s on tap at just 1600rpm. 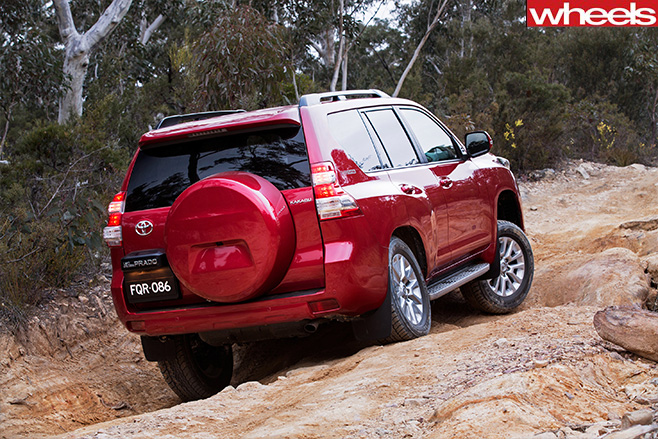 THE WHEELS VERDICT
Prado’s new diesel engine and auto gearbox bring a new level of refinement and driving pleasure, but no significant improvement in performance.

THE WHEELS REVIEW
THE PERENNIALLY popular Toyota Prado has received a new, 2.8-litre diesel engine, the first new diesel in any Prado since the 3.0-litre KD-FTV, or D-4D as it is commonly known, arrived in late 2006 in the previous, 120-Series Prado. 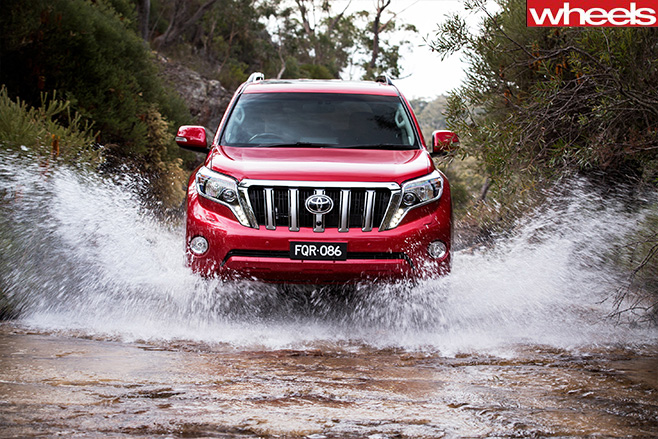 The all-new diesel is significant not just for Prado but for Toyota, as it will also power the soon-to-be released 8th generation Hilux ute and the also imminent Hilux-based Fortuner 4wd family wagon.

Given that 98 percent of past Prado buyers have opted for the diesel over the Prado’s more powerful petrol V6, the diesel is the main deal here. With diesel also dominating Hilux sales, and the Fortuner to be diesel-only, this engine is destined to become very common on Australian roads, and quickly.

The diesel in question is designated the 1GD-FTV, where GD stands for Global Diesel. Even though the D-4D moniker is carried over, this is new from the ground up. 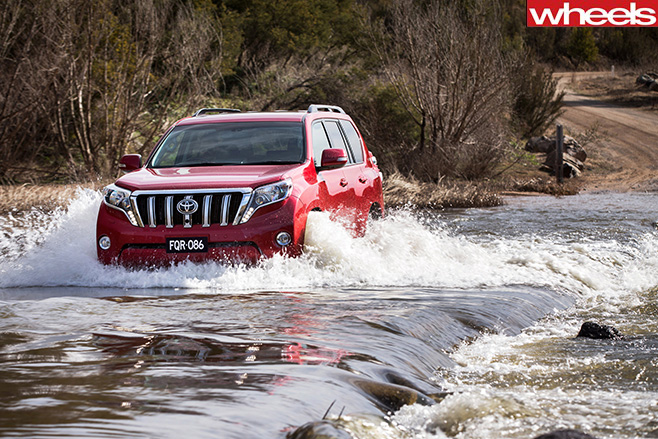 Most significantly, it claims 40Nm more torque (now 450Nm when mated to the auto ‘box) despite being 227cc smaller than the outgoing engine, and running a lower compression ratio: now 15.6 ( down from 17.9).

It does this off the back of the latest generation high-pressure (2500bar) common-rail fuel injection system, a more sophisticated variable-nozzle turbocharger and newly designed combustion chambers.

The claimed maximum power of the 2.8 is still only 130kW, up just 3kW up on the 3.0-litre engine, so it’s still no rocket given it has to haul well over two tonnes of bulky 4WD. Still, the 2.8 is generally more enthusiastic than the 3.0 thanks to its extra low-rpm torque. 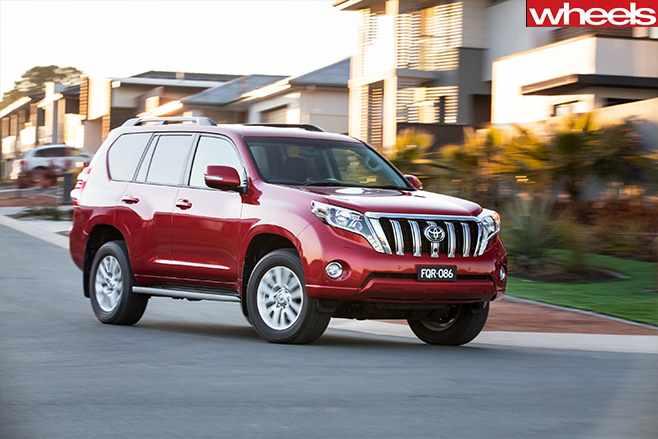 When mated to the carried-over six-speed manual (only available on the less expensive GX and GLX variants), the 2.8’s maximum torque is pegged at 420Nm. But this comes on tap at just 1400rpm, so there is 10Nm more at 200rpm less than the out-going 3.0-litre – again a measure of the extra efficiency of this smaller engine.

This new 2.8 is not however about extra performance. It’s about refinement, and this is where it makes the biggest leap forward from the 3.0-litre. It doesn’t sound or feel as diesel-like. 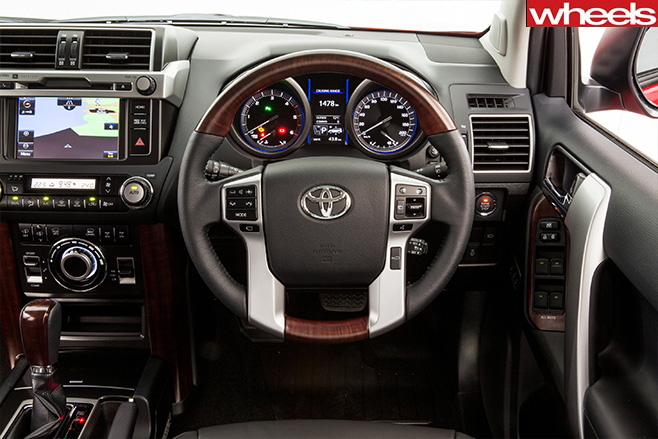 Gone is the diesel rattle and much of the knock of the old engine. You can still tell the 2.8 is a diesel but it’s certainly a lot quieter and smoother under part or full throttle.

The overall driving experience is also enhanced by the six-speed auto, as the shifts are notably slicker and better timed than the five-speeder’s were. The 19 percent taller top gear also makes the Prado quieter and more relaxed at highway speeds.

As ever, the supple, long-travel suspension produces a cosseting ride on even the worst roads, with only the odd disturbance from the solid axle at the rear. But with the Prado’s significant weight factor thrown in, the soft suspension also contributes to soggy and generally uninspiring dynamics, although VX and Kakadu models, with their KDSS suspension do handle noticeably better. 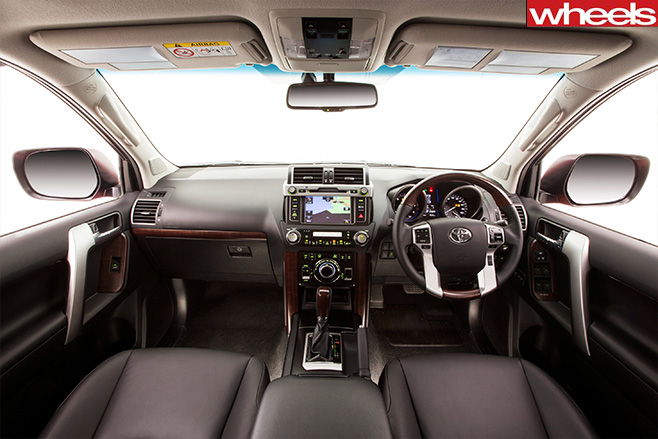 The same supple, long-travel suspension, coupled with dual-range gearing and generous ground clearance, provides the Prado with off-road ability that will embarrass just about all of its competitors.

In a move that should please buyers, satellite-navigation has been added to the standard equipment list of the volume-selling GXL model. The top-of-range Kakadu model also adds a rear cross-traffic alert.

One thing that Toyota hasn’t done with the new Prado is address it’s modest 2500kg tow rating. Competitors such as Jeep Grand Cherokee and Land Rover Discovery are specified to tow 3500kg. Not that buyers seem to mind.

Click here to read the full range review of the Toyota Prado. 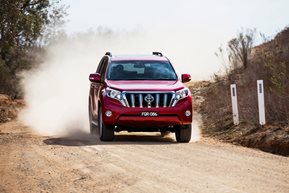