A stint – albeit mainly on snow – in the next A4 wagon from Audi suggests it will bring better dynamics, comfort and space when it arrives in Australia this year.

WHAT IS IT?
This is the new-generation Audi A4 Avant, with Avant being Audi-speak for wagon. The current car has been in Australian showrooms since 2008, and this new gen sits on a fresh platform with updated drivetrains, more space and slicker overall execution.

WHY WE’RE DRIVING IT
It’s our first chance to try the wagon version of Audi’s all-new A4 – an elegant alternative to a premium SUV.

THE WHEELS VERDICT
The A4 Avant is a more handsome, better equipped and more spacious cargo-carrier than its predecessor, with better dynamics and likely lower running costs. It’s a slick, spacious wagon.

Plus: Improved space, better packaging, stylish cabin and clever tech
Minus: Evolutionary styling both in and out 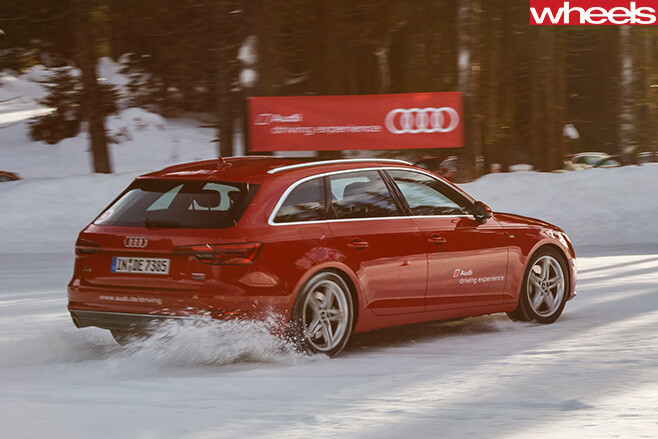 THE WHEELS REVIEW
LET’S get this cleared up straight away: we’ve driven the new B9 A4 Avant ahead of its mid-year arrival in Australia, but our test car was shod with studded snow tyres and we drove it predominantly on ice in Seefeld, Austria.

So we can’t talk about refinement levels for the all-new Avant, which will battle the BMW 3 Series Touring and Mercedes C-Class estate for cargo-carrying customers.

The new A4 Avant is bigger than the car it replaces: the wheelbase has grown 18mm to 2820mm, 10mm more than the 3 Series Touring but 20mm less the C-Class estate.

The A4 Avant’s 4725mm length is 26mm more, the 1842mm width a 16mm increase, and as is the fashion it sits 2mm lower at 1434mm. That makes it larger than the BMW 3 Series Touring and the Mercedes C-Class estate. The Lexus IS and Jaguar XE are not offered as wagons at present, making this contest a German civil war.

Cargo space is up from 490L to 505L, matching the C-Class Estate and trailing the 3 Series Touring by a mere five litres. With the 20:40:20 split-fold rear seat down, the A4 Avant matches the C-Class again with 1510 litres, but pips the 3-Series by 10 litres. The rear cargo area has a flat floor, with a level load lip and an electronic luggage cover and electronic tailgate on our test car that can be operated by a latch, or by using the key-fob.

While the exterior of the A4 is evolutionary, with a sharper-edges and clever shut lines fronted by that large, single-frame grille, the Avant’s rear follows the same swooping shape as its predecessor to maintain its athletic profile, with an integrated rear spoiler helping it achieve a Cd of 0.26, matching that of the super slippery C-Class. Underneath that wrapping is an interior that moves forward from what was the benchmark cabin when the previous A4 arrived in Australia in 2008. When the Mercedes-Benz C-Class arrived in 2014, its interior dazzled – and rumours within journalist circles were that the A4 had been delayed as the Merc’s interior had surpassed expectations considerably. While the new A4’s cabin is excellent, it’s not out of sorts compared to the rest of the range, suggesting that the designers maintained a strong focus throughout: there’s beautiful Alcantara on the doors, which open and close with a satisfying thud, while the fit and finish inside is exceptional. The layout is far simpler and neater then the button-festooned dash of the previous generation, with a line of haptic buttons across the centre, and overall takes an evolutionary step in terms of style.

Functionality sees the brilliant Virtual Cockpit up front, the digital display that arrived with the latest TT and Q7 last year. It’s teamed with head-up display to make this the best instrument cluster in any motor vehicle – regardless of price – on sale today. Clever tech also includes wireless phone charging in the centre console.

The seats are more supportive and have better bolsters than the flat seats of the old model, and the dished, three-spoke, perforated leather steering wheel is thicker, giving an impression of quality as it feels great to hold. The adjustment in both the seats and steering wheel provides an excellent driving position, with ample all-round vision, while the 8.3-inch centre screen’s crisp reversing camera is teamed with a front-end camera too, both with clarity to match the clear, neat graphics when they’re not in use.

The A4 Avant is a much better balanced vehicle than the car it replaces, and that’s down to numerous factors. As well as the 50kg weight reduction over its predecessor, which makes the quattro Avant 1540kg, there’s electric steering that’s better weighted, and provides more feel and more precision.

This is an easier car to position on the road, and far more communicative. It needs to be, given the agility of the new Jaguar XE – which set a new class benchmark that sent it to the podium of 2016 Wheels Car of the Year. Audi addressed dynamics with the B8 generation, which saw the engine finally positioned behind the front axle, yet the B9 is a significant step up. 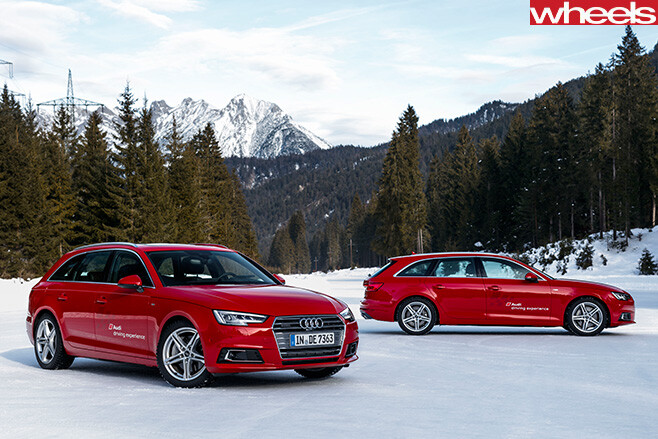 The quattro all-wheel drive system is more flexible, too. As much as 85 percent of torque can be sent to the rear axle, while the default setting sees a 40/60 split between the front and rear axles. The ESP is a three-stage system, with the default setting too grabby on ice but the mid-level Sport allowing playfulness without rude interruption. The final setting sees the system turn completely off.

The 2.0-litre TFSI makes 185kW and 370Nm, up 20kW and 20Nm from its predecessor, and is fitted with a new seven-speed dual-clutch S tronic transmission. The wagon achieves 0-100km/h in a claimed 6.0sec. That’s a 0.6sec improvement, and the added punch comes with a better fuel figure too – as good as 6.1L/100km on 17-inch wheels, an entire litre better than before. Fuel consumption increases with larger wheels, the worst being a still impressive 6.4L/100km on 19s.

Our limited drive on snow and ice in Austria showed the engine possesses a smooth, flexible manner with a progressive throttle, making the power-slides and slaloms we tackled an utter joy. The throttle did have some delay – as expected on the ice – before the message translated to motion, but the steering was sharp and the body roll minimal. It felt more connected, more flexible and better balanced than before.