Don't be misled by the familiar look. Under the skin, Audi’s all-new A4 packs a technological arsenal intended to unleash hell on 3 Series and C Class.

WHAT IS IT?
A tech-laden missile aimed squarely at the heart of the Mercedes-Benz C Class, BMW 3 Series and Jaguar XE. It’s the new generation Audi A4 and it’s good, very good. If only it looked more exciting…

WHY WE’RE DRIVING IT
Because under that boring, same again styling, 90 percent of this A4 is brand new. Plus it’s lighter and more efficient, and Audi has thrown in fistfuls of tech to make it the smartest, most connected car in its class.

THE WHEELS VERDICT
There’s a new mid-size heavyweight in town. The new A4 is better in every way, but its killer blow is a rockstar interior with oodles of class-leading tech that makes it safer, cooler and smarter.

THE WHEELS REVIEW
IT’S EASIEST to think of the fifth-generation Audi A4 as a new iPhone, which despite looking similar to your last one can suddenly do new and amazing things. 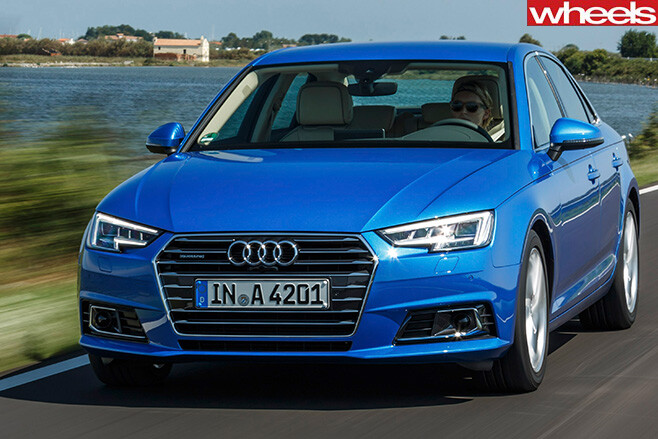 Parked next to the old A4 it looks more facelift than new-gen, but Audi says that’s deliberate. The A4 is too popular and too important to risk a dramatically different design, and Audi reckons A4 buyers love its understated three-box shape.

Don’t be fooled. Under that conservative sheetmetal, a quieter and deeply more impressive revolution has taken place that should have BMW, Mercedes and Jaguar worried. And it’s all to do with technology.

Peel back that same-again-only-sharper body and 90 percent of the A4 is new. It now rides on the latest version of Audi’s MLB evo platform, and it is lighter by up to 120kg, 25mm longer and has new engines, new transmissions and new suspensions.

The headline change, however, is a completely redesigned interior that is not only stylish and wonderfully contemporary, but bristling with tech. Even in base poverty-pack trim, the A4’s cabin is a triumph of quality materials, textures and restrained elegance that trumps the mighty Mercedes C-Class. This is mostly down to the seamless integration of a central 8.3-inch touchscreen, which is a class above the tacked-on tablet you get in the Benz, and also because the A4’s restrained dash is effortlessly elegant against the flashier Merc.

It’s the tech, though, that truly sets the A4 apart. Tick all the options and your A4 will arrive with 30 on-board driver assist systems, most of which have been lifted from the new Q7 SUV. The most interesting system is called Traffic Jam Assistant and can transform the A4 into a semi-autonomous car in heavy traffic. It works by combining the lane assist and radar cruise control systems, and at speeds under 65km/h it will steer, brake and accelerate on its own by locking on to the car in front. There’s also cordless charging for your smartphone, supercool Matrix LED headlights, an optional (and excellent) 19-speaker Bang & Olufsen surround-sound hi-fi system, on-board wifi, and shatter-proof Audi-branded tablets that clip onto the back of the front seats to keep the kiddies entertained.

The piece de resistance, though, is the A4’s virtual cockpit, which is available as an option. Already proven in the TT, a 12.3-inch screen replaces the conventional instrument cluster. It’s a gorgeous and fully configurable piece of tech that none of the A4’s rivals can match, and one that should sell Audi thousands of cars. Imagine sitting in a dealership and seeing that screen come to life. You’ll be yelling “Sold!” before your feet are out of the car.

Far from just wowing with techno glitz, this new A4 also has the dynamic ability to back up its armoury of technology.

Refreshingly, Audi hasn’t tried to make the A4 a dynamic rival for the sportier 3 Series or new Jaguar XE. With front-drive and quattro variants, it’s never going to match its rear-drive rivals for sheer driving thrills.

Instead, the emphasis is on comfort, cabin refinement and efficiency, helped in part by a hugely impressive drag coefficient of 0.23. Audi says it spent close to 1000 hours in the wind tunnel honing the new A4’s aero-efficient body and yes, at freeway speeds it does feel particularly slippery and whisper quiet. It also feels and handles like an altogether bigger car. 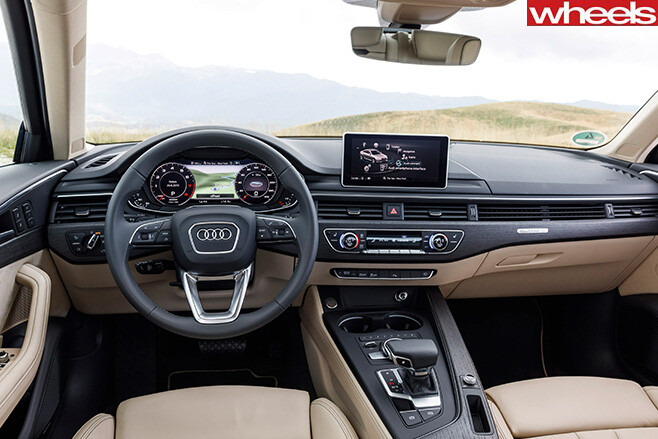 In reality, it is only slightly bigger – 25mm longer, 16mm wider and riding on a 12mm-longer wheelbase of 2820mm – but there’s more rear legroom (up 23mm) and lowering the front seats has boosted headroom by 24mm, all of which helps to make the A4 a terrific long-distance cruiser.

Audi boffins claim it has the same NVH levels as the company’s flagship A8, but don’t stress that this is a dynamic pup. The A4 might not encourage you to actively seek out a winding mountain road but that doesn’t mean it turns into a sloppy, uninspiring mess when you do.

New five-link suspension front and rear ensures the A4 rides superbly on all three wheel sizes (17, 18 and 19-inch alloys are available), and it also displays taut body control. Buyers can choose between three basic suspension set-ups: standard steel springs, or the choice of two adaptive systems with variable damping offered in Sport or Comfort trims. The Comfort system is a first for Audi and, when matched with the base car’s 225/50R17 wheels, delivers a revelation of pliancy and control on coarse, corrugated roads.

Choosing the Sport set-up lowers the ride height by 23mm and, with the dampers in their hardest setting, tightens things up considerably, but mercifully it isn’t so firmly sprung that it tries to bounce you off the road.

The standard electric steering is sharp and, while devoid of feedback, is still preferable to the optional adaptive rack, which feels synthetic. At speed you can feel the variable system changing the ratio, which detracts from the driving experience. At the international launch in Venice, we sampled the 1.4 petrol, the high-output 2.0 petrol and the 3.0 TDI, which is one of the sweetest-spinning diesel engines around. Yet it was the 2.0-litre petrol quattro that impressed most. Mated to an improved seven-speed dual-clutch transmission (the 3.0-litre TDI uses an eight-speed auto), which seems to have eradicated most of the jerkiness and hesitation that plagues dual-clutch ’boxes in city traffic, the petrol unit is smooth and muscular, and delivers a natural and rorty exhaust note. It’s no slouch and will pull the A4 from 0-100km/h in 5.8sec.

Opting for the quattro system, which can send up to 85 percent of the drive to the rear axle, adds another layer of dynamic ability to the front-driver’s already pointy front-end. Push hard and all A4s will naturally begin to understeer, but on switchback roads the handling is sharp, direct and predictable, if ultimately a little uninvolving. All this points encouragingly towards the already confirmed S and inevitable RS variants that are expected to arrive late next year.

So the dynamic ability is there and the fact this new A4 isn’t overtly sporty should be seen as a strength rather than a weakness. What the A4 lacks in pure driving thrills is more than made up for with fuss-free handling, a smooth and cosseting ride and a rockstar cabin.

While some more creativity on the exterior design would have been welcome, what Audi has built under that familiar shape is a deeply impressive luxury sedan. Ingolstadt has invested the money and time revolutionising the areas it thinks its customers will value most. If you’re the type that places a higher priority on a sublime interior and ground-breaking tech over sheer dynamic ability, this new A4 is untouchable.