The A4 looks much the same but everything’s new. And – mainly – much better.

Every two years or so, an all-new premium medium sedan arrives from Germany. This year it’s Audi’s turn.

WHAT IS IT?
Now in its ninth generation (taking in the preceding Audi 80), the Audi A4 has long competed against the BMW 3 Series set with leading design, quality and efficiency. This all-new (believe it or not) B9 version adds advanced driver-assist and safety technology to a lighter and – hopefully – more dynamic package.

WHY WE'RE TESTING IT
Quality, design and driving ease are bywords for the Audi A4, but against the latest Mercedes C-Class and BMW 3 Series that’s not enough. So the ninth-gen premium medium sedan from Ingolstadt promises gains in dynamics, efficiency, safety, and technology, all while advancing the A4’s traditional strengths. Do they make it a segment leader? 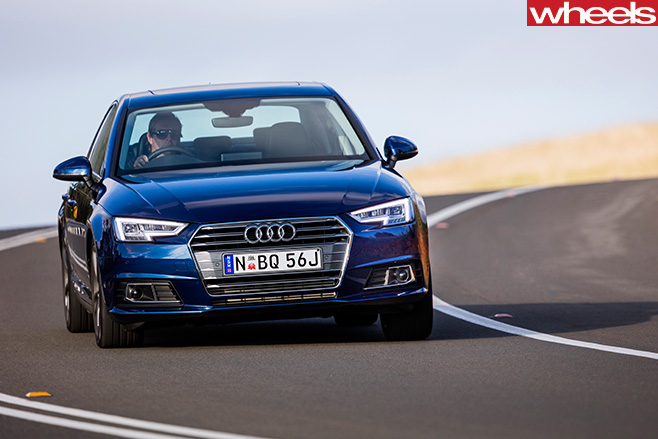 THE WHEELS VERDICT
It’s easy to dismiss the latest Audi A4 as a lightly reworked version of the previous generation sedan. But beneath what is a disappointingly familiar skin lies a lighter and stronger car, with a knockout cabin, much improved dynamics, and a level of safety and security to worry the Swedes. The formula may be much the same as what’s come previously, but the real advances are obvious the moment you step inside and push the start button. A less forgiving ride is one of the few downsides in what is a very real threat to the BMW 3 Series and Mercedes-Benz C-Class hegemony. Don’t let the B9’s visual sameness fool you. And do stump up for adaptive dampers. 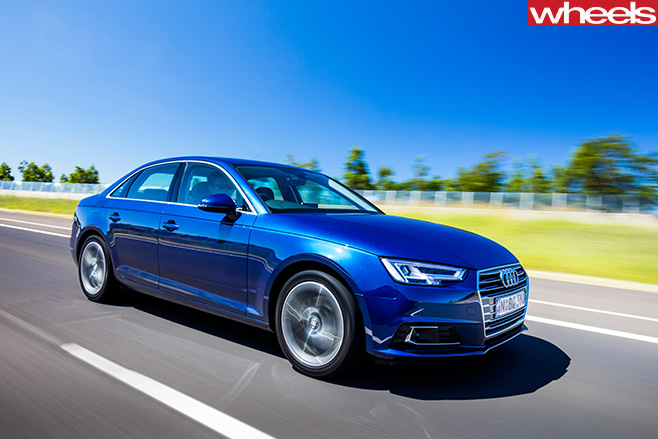 THE WHEELS REVIEW
AUDI has been battling BMW’s 3 Series since the 80 launched against the 1602/2002 in 1972. What an intimidating icon for Ingolstadt to take on. Being up against Cate Blanchett for a Best Actress Oscar would be less daunting.

Eight iterations later, and despite controversy over the “evolutionary” design, Revolution #9 would be a more accurate description for the all-new B9 A4. Because it really does represent a clean-sheet opportunity against the Munich menace.

Struggling to spot the differences? Best to see past the familiar (though sleeker) six-light silhouette and (now wider) hexagonal grille, and drink in the more exquisite details instead… such as the Saab 900-esque clamshell bonnet, arrowhead headlights, double-edged crease lines, and tapered tail graphics. The result is a restrained, masculine elegance. 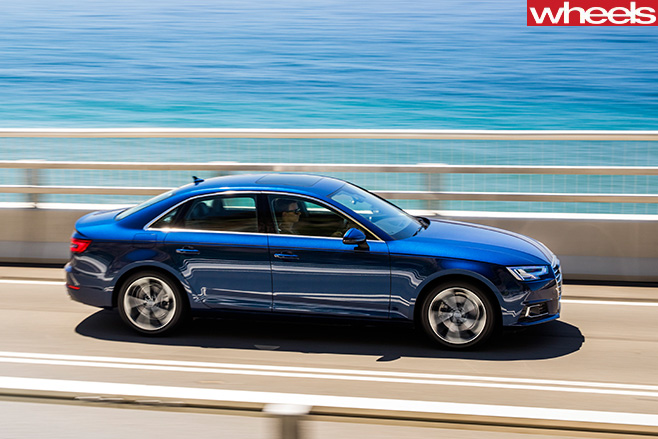 Bolder ideas abound inside. Audi has long been a maestro at peachy interiors, but the latest A4’s sprawling, spacious cabin – aided by 24mm more front headroom, 23mm extra rear legroom, and a 12mm stretch to a wheelbase that’s now just 95mm short of a Commodore’s – feels like Apple might have executed it.

Fresh and airy, the horizontal dashboard treatment flows with sculptured surfaces and lush materials. And yet – needlessly fiddly T-bar shifter and the odd rattle aside – cold Teutonic functionality abounds. Everything operates as expected, from the excellent driving position and supportive seats to the beautifully tactile switchgear. Then there is the eye-catching instrumentation, be it the attractive standard, classically analogue, dials or the sprawling vista of the Virtual Cockpit multimedia smorgasbord, which is intimidating only initially. Audi traditionalists might also appreciate the full-length vent outlets, which is homage to the early 100. 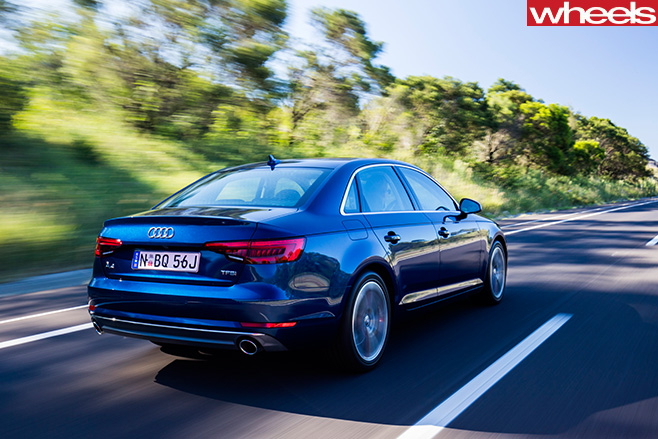 Some 75 percent of sales should fall evenly between the 2.0 TFSI petrol twins, in 140kW/320Nm front-drive guise (from $60,900) or rip-snorting 185kW/370Nm quattro all-wheel drive (from $69,900). Regardless of a 105kg penalty, the latter strides forward with almost ferocious intent. But both accelerate strongly and keep the pace up with punchy ease, coated with that familiar Audi slickness.

The slow-selling V6 turbo-diesel has disappeared, replaced by a $66,900 140kW/400Nm 2.0 TDI quattro boasting fuel use of just 4.6L/100km. As its 7.2s 0-100km/h sprint time suggests, this is no slug either, pulling vigorously from impressively low speeds, with pleasing civility to boot. 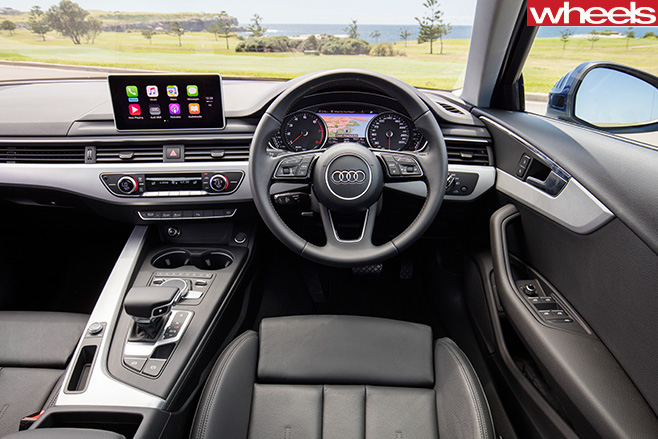 However, the biggest advance over the previous model is how consistent the A4’s (electromechanical speed-sensitive) steering and handling have become. Switching to the Q7’s all-new MLB Evo modular longitudinal architecture has helped cut 65kg. Additionally, it’s all change for the lighter five-link independent suspension system, with less unsprung weight and better dynamic responses.

The numbness of old has given way to a sharper and yet more evenly weighted helm, backed up by significantly more precise and controlled cornering. More feedback would be welcome, but over the hot and dry flowing rural roads around Canberra, the degree of composure at speed was revelatory for the series.

On the other hand, the ride on the standard 245/40R18 rubber can be a little busy and firm at times, traits underlined by the optional $1950 adaptive dampers fitted to the cushier quattros as tested. Two different systems prioritise sport (with a 23mm ride height drop) or comfort (minus 10mm). Occasional road noise intrusion was also detected, though that’s typical of the breed. 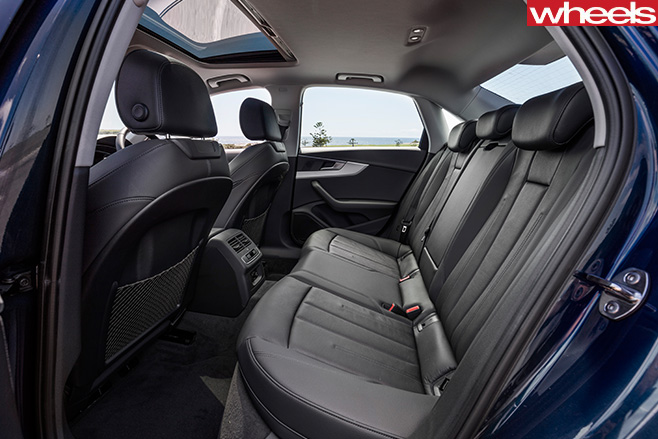 So the ninth-gen combatant against the 3 (and Benz’s top-selling C-Class) has lifted its game remarkably, making B9 the best A4 ever. Forty-four years on, the fight’s become very real. 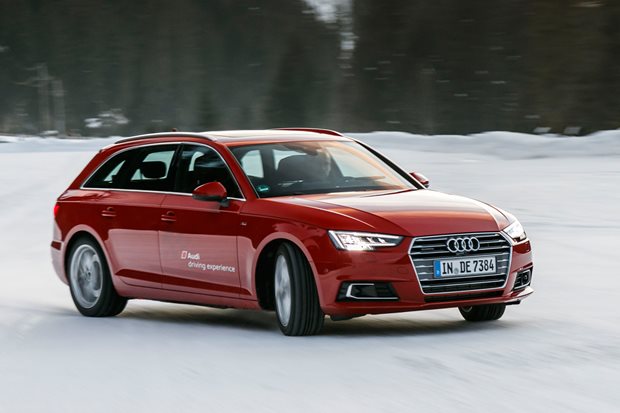 A stint – albeit mainly on snow – in the next A4 wagon from Audi suggests it will bring better dynamics, comfort and space