WHAT IS IT?
Audi takes its largest diesel-engined SUV, the Audi Q7, and turns it into a fuel miser with a battery-electric hybrid system.

WHY WE’RE TESTING IT
Audi has launched the Q7 in Australia with two diesel-engined variants that use just 5.9L/100km on the combined cycle – pretty good for something that weighs more than 2.0 tonnes. The hybrid gubbins will help to shave the fuel use to about an impressive 1.7L/100km when it arrives next year. 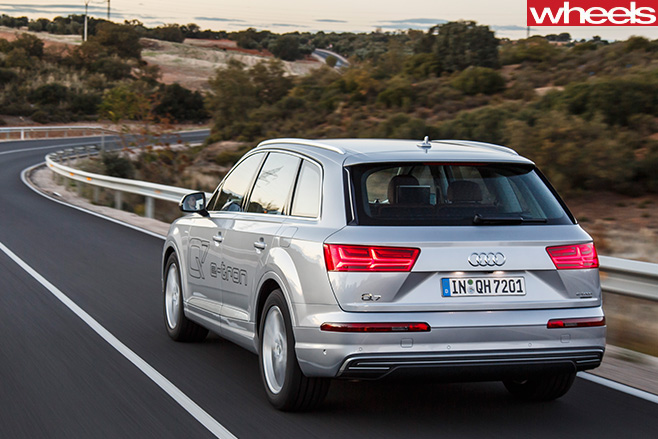 THE WHEELS VERDICT
Take the plushness and spaciousness the regular Q7 V6 quattro and add plug-in TDI e-tron powertrain to get all the attributes of the donor vehicle plus a remarkable extra performance/efficiency equation. Could collectively satisfy greenie Sarah Hanson-Young, rev-head Craig Lowndes and the populous Pitt-Jolie bunch.

PLUS: Torquey diesel hybrid response, ride quality, intriguing yet workable technology and engineering, usual classy Audi cabin and appointments
MINUS: No chance of arousal from exhaust note, sensitive steering, no spare tyre (that’s where you find the battery), big and heavy beast for the ‘burbs.

THE WHEELS REVIEW
IT TOOK some time for the world to understand the concept of an SUV as a performance vehicle.  Even longer to appreciate the apparently conflicting daftness of a hot-rodded SUV that is somehow also a green machine.

Joining this very select band is the Audi Q7 e-tron 3.0 TDI quattro, the marque’s first plug-in hybrid with a diesel engine.  (Okay, we must acknowledge that astonishing, seemingly never-ending emissions and fuel efficiency scandal.  When will it end?)

Still, Audi certainly isn’t walking away from diesel engines and this one – unusually - is a plug-in hybrid with a six-cylinder diesel engine and permanent all-wheel-drive. 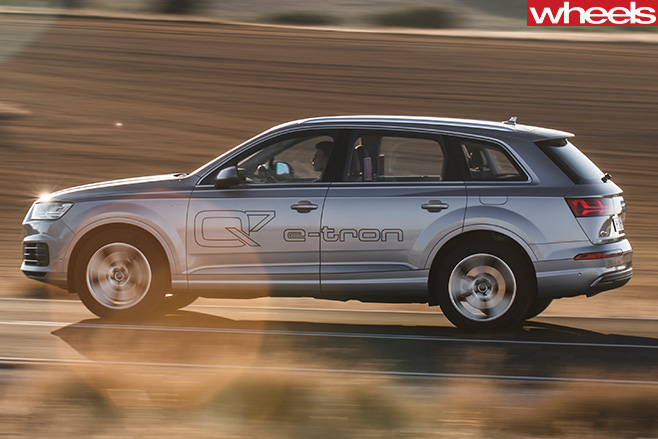 Here are two statistics to contemplate: this Q7, hardly a featherweight at a hefty 2445kg, will burst out of the blocks and reach the nominal 100 km/h mark in precisely six seconds, and yet it also has the chameleon-like ability to get along (rather more sedately, let it be said) whilst using diesel at the rate of not even two litres across a 100-kilometre journey.

The V6 3.0 TDI engine and the electric motor are both paired to an eight-speed tiptronic gearbox and there is a choice of four modes: EV, Hybrid, Battery Charge and Battery Hold.   Electric driving is prioritised in EV mode, while in Hybrid the management system makes the calls on which driven type is used.  Battery Charge mode is self-explanatory and Battery Hold saves the available electric energy for later. 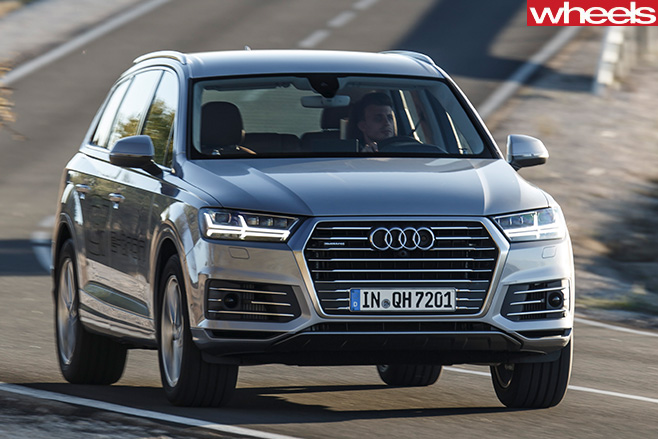 Near Madrid, on a mixed 100km loop of freeways and twisty rural single laners meandering through sleepy Spanish villages, we tried all the choices (but mainly went with the Hybrid mode), returning 6.6L/100km. This included some pedal-down acceleration runs where the big unit effortlessly launched using lots of rear-end squat.

In some modes, throttle sensitivity is dulled for better fuel efficiency but when asked the e-tron gets the scenery moving.  Its weight is a handicap when required to swing through some tight corners but the extra kilos help keep it settled over the urban speed humps. Its recovery from bumps is exemplary. In comfort driving mode, there is some body roll, but this type of behaviour tidies up when in the dynamic setting.

The electromechanical steering of the new Q7 still doesn’t quite cut it, with less-than-desirable road feel.

In all-electric mode the Q7 is capable of travelling up to 56 kilometres solely reliant on the high-voltage lithium-ion battery – with impressive throttle response and of course with zero tailpipe emissions. Audi reckons that a full charge on a three-phase industrial outlet takes less than 2.5 hours so it’s possible to use battery power along on a daily work commute. You can also recharge from a conventional outlet at home or work.

According to the New European Driving Cycle (NEDC) test, the efficiency reaches as low as 1.7 litres/100km. Real world readings are higher. Unequivocally, though, the smooth Leviathan is a frugal jigger.

Charged up and with a full 75-litre tank of fuel, and sometimes taking advantage of braking and cruising recuperation, the Q7 e-tron can travel - without stopping - a distance of 1400 kilometres, the equivalent of Melbourne to Sydney to Coffs Harbour.

Audi Australia says the newcomer will be generously appointed with new MMI infotainment system and virtual cockpit display (the screen resolution is brilliant) and new-for-the hybrid Q7 thermal management system with integrated heat pump. This collects waste heat from the electrical components to use for heating or cooling the interior.

The Australian price of the Q7 plug-in hybrid is yet to be determined. Somewhere adjacent the Porsche Cayenne hybrid’s $140,000 is a good guess.

This is new.  The Q7 e–tron’s standard MMI navigation-plus and hybrid management systems work together using GPS data and real-time traffic info to compute the best-case strategy at the start of a trip.  Predictive efficiency system generates a detailed image of the route up to three kilometres ahead and uses visual signs in the head-up display to prompt releasing the throttle to save fuel. The pedal simultaneously pulses against the sole of the driver’s foot. Cleverly, the Q7 reaches the destination with zero battery power left… 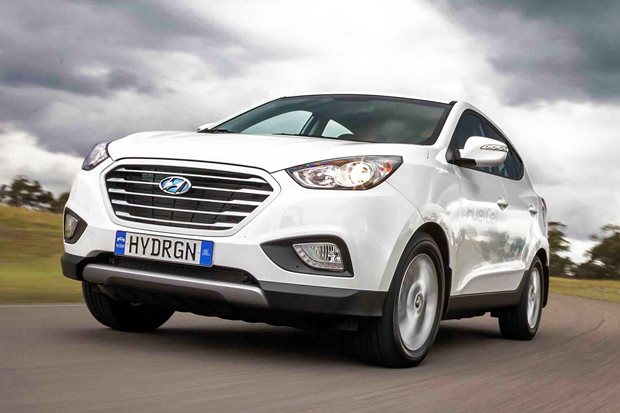