WHAT IS IT?
Bentley’s first SUV, fully-loaded with a revitalised twin-turbo W12 under the bonnet.

WHY WE’RE DRIVING IT
It’s our first chance to drive the big Bentley on Aussie soil, even if it is limited to the smooth Sandown International Raceway. There’s no chance to test its all-terrain modes unless we slide off into the sandtrap…

THE WHEELS VERDICT
The Bentley Bentayga is remarkably agile, super swift yet genuinely opulent inside. Even if next-to-nobody takes it off-road, its capabilities are impressive. It’s one mighty expensive SUV, though…

PLUS: Sets an SUV benchmark in terms of luxury; strong dynamic capabilities; best W12 yet
MINUS: Makes a Range Rover Sport look like a rational purchase

THE WHEELS REVIEW
BENTLEY made its name racing, so it seems completely at odds that it would build an SUV. More so that it would unleash it on a racetrack. Yet Sandown International Raceway, steeped in Australian motorsport history but far from Bentley boys’ heartland, is the venue of the first local drive.

The track is also where you’re less likely to care about the acres of hand-stitched leather, trunks of woodgrain and things such as rear-tray tables – unless you want to throw up your breakfast. From editor Butler’s first drive, you already know about that sumptuous interior, those aluminium-intensive, hot-formed body panels and the single tailgate with its optional ‘event seat’.

The sole purpose of this sample is to prove the sceptics wrong: firstly, that this is a proper Bentley, and second, that despite its 2422kg it can storm the 3.9km raceway’s lengthy straights, pull up, and handle its tighter corners like a luxury sophisticate should. Bentley says that it did 400 laps of the Nurburgring in developing this monster, so Sandown should be a walk in the park.

Under the nose, the 447kW W12 isn’t the freshest, fastest engine, but it was so extensively reworked that Bentley says it’s ‘new’. That it has invested so heavily in the Dubbya is a surprise, somewhat, as the V8 introduced for the Continental in 2012 has easily eclipsed W12 Conti sales. 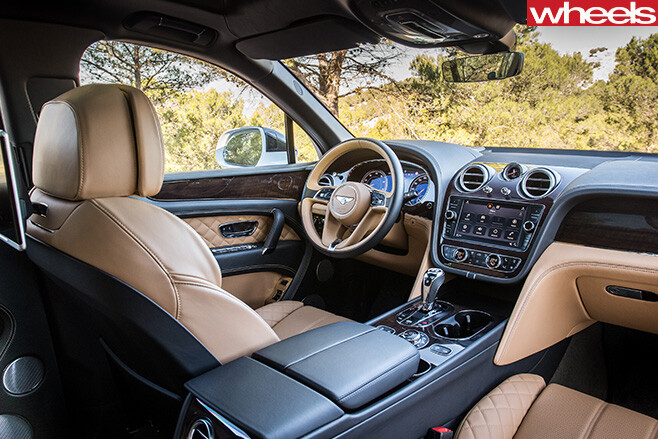 The technical progress is evident on paper: there’s stop-start as well as variable displacement, twin-scroll turbochargers as well as direct and plenum injection. All of this to achieve a 301km/h top speed, yet be able to ford 500mm of water (not at the same time). Oh, and a fuel figure of 12.8L/100km.

We don’t care about that right now: it’s the stonking 900Nm from a mere 1250rpm that we’re tapping – and this SUV absolutely flies. The 4.1sec 0-100km/h claim seems almost conservative. Flatten that pedal and the all-wheel traction is abominable: there’s no squat, as the Bentayga sits flat and firm on its standard 48-volt ‘Electronic Active Roll Control’ and ‘Bentley Dynamic Ride System’ air suspension, which also produces a remarkable, seemingly unshakable attitude into Sandown’s tighter corners. Nibble a ripple strip, and there’s barely a disruption to the smooth ride – albeit on a near-perfect road surface – and once the crisp turn-in has been exploited to pinpoint apex accuracy, the purchase from the 22-inch Pirelli tyres is immense.

Saying that, there’s a genuine luxuriousness to this Bentley: while its progress is faster than Donald Trump’s body guards at a rally, its refinement and plushness remains. There’s a great tone, but no belching roar bellowing from the ovoid tailpipes either; more an enriched purr.

In the cabin it’s even quieter, even if you switch to Sport mode. One of the four drive settings (Comfort, Sport, Custom and Bentley), it alters the usual suspension, throttle, steering and shift-points. It’ll still seamlessly grab the next of eight forward gears at 5500rpm, or head over to manual mode for a place like Sandown to use all of the range up to the 6100rpm redline.

At no time does the Bentayga degenerate into a raucous racer made for on-track debauchery: like its sophisticated, comfortable interior, it’s never over-exuberant but always poised. The brakes, after a few laps, proved a weak point, but our ever so brief track time left us impressed.

Everyone’s making SUVs these days, all claiming to be that little bit special. And, on track at least, the Bentayga proves it’s not merely a show pony but offers genuine substance.