A subtle upgrade to the car that received Australia’s top motoring award in 2014 turns it into much more of a viable fossil fuel alternative.

A subtle upgrade to the car that received Australia’s top motoring award in 2014 turns it into much more of a viable fossil fuel alternative.

WHAT IS IT?
BMW has packed more punch into the batteries of the 2014 Wheels Car of the Year winner, increasing its range by more than 50 percent.

WHY WE’RE TESTING IT
BMW’s boffins have managed to squeeze more electrolytes into the 96 cells used to power the i3, increasing electrical capacity from 60Ah to 94Ah – a bit like increasing a conventional car’s tank by half as much again – and eked more savings out of the electronics. It means real-world driving range jumps to about 200km for the battery-only i3, and to 330km for the i3 Range Extender that uses a two-cylinder petrol engine as a generator. 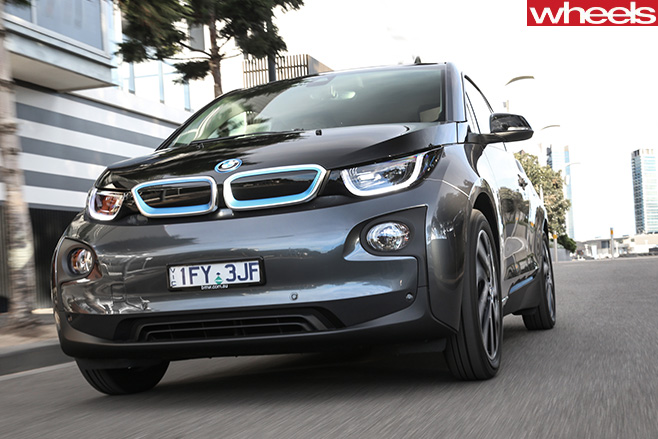 PLUS: Real head-turner; oozes style and technology; big jump in driving range
MINUS: Lack of recharging infrastructure; some harshness to ride and braking

THE WHEELS REVIEW
WANT a pure electric car but can’t seem to get over that abject fear that your battery-powered ride may one day strand you short of your destination as the electrons dry up? BMW reckons it has the answer. 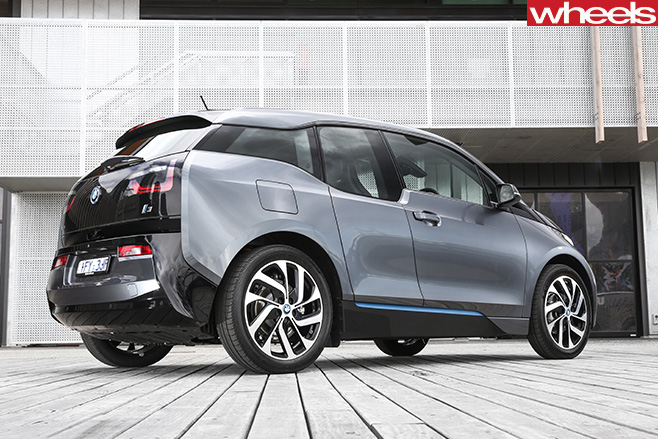 The words “range anxiety is over” popped up several times at the Melbourne-based launch of the facelifted BMW i3. However there’s next to nothing to say that what you’re buying is different – there’s a new, more energy-dense battery costing $2000 more but adding about 70km of range to the all-electric i3, some new dark wood trim inside, and for $962 the same electric blue external paintwork as the i8 plug-in supercar.

BMW has also thrown in a formerly optional $790 DC-compatible charger that will let you bump the battery up to 80 percent for free at the single rapid recharging point in Sydney, or one of the two Melbourne-based ones, in less than 40 minutes. The idea is to help future-proof the car – more fast recharging stations will come one day. Plugging it into a normal wall socket will take up to 14 hours for a full refill at a cost of about $5 if you’re using green juice. 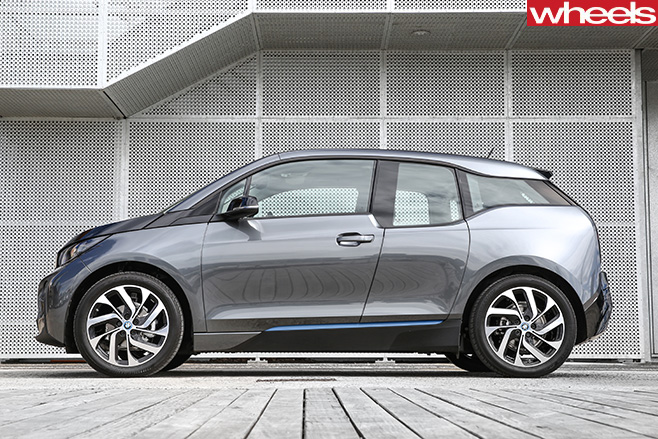 The i3 fitted with the new, real-world 200km range 94Ah battery will sell alongside ones fitted with the older, 60Ah battery, which will remain on sale here priced from $63,900 even though BMW openly admits its 130km range “probably wasn’t high enough to start with”.

Spend another $6000 for the 120kg petrol-driven 660cc two-cylinder range extender generator that hangs off the back of the i3, and its reach jumps to 330km, up from 245km. The 9.0-litre fuel tank remains the same capacity. 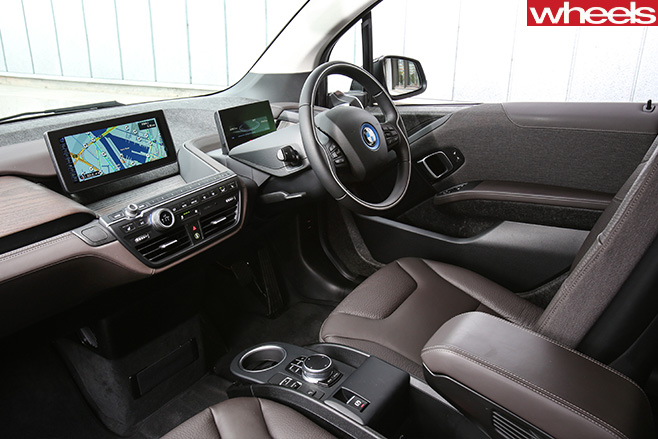 Because the cells pack more juice, they weigh more, adding 50kg. This knocks 0.1sec off the i3’s still brilliant 0-100km/h acceleration time, pulling it back to 7.3sec for the battery-only car that feels much more powerful than its 125kW/250Nm numbers suggest.

Yes, it’s a little different: selecting drive can be a bit confusing the first time, the regenerative braking borders on brutal, speed humps become small planets at anything above walking speed, the raw fibre-look grey dash is hard to the touch, and the seats are all hand-adjusted and not powered. 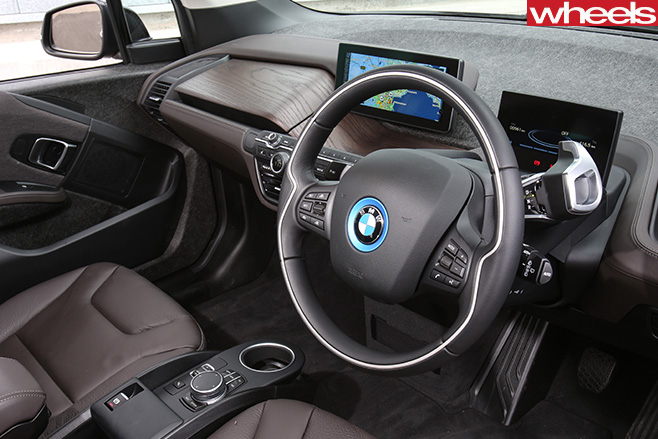 But everything else we loved about the WCOTY winner is still there. It’s agile, the turning circle is tiny and the steering quick, and the visual combination of enviro warrior and ubergeek via the materials and user interface is just right.

We only spent a couple of hours driving around the crowded northern suburbs of Melbourne in the new 94Ah i3 – via the old 1956 Olympic Games village. Over 45-odd kilometres of driving on everything from freeways to back roads, our range fell from 190km to around 140km, starting in a pure EV and swapping half-way through into a REx. 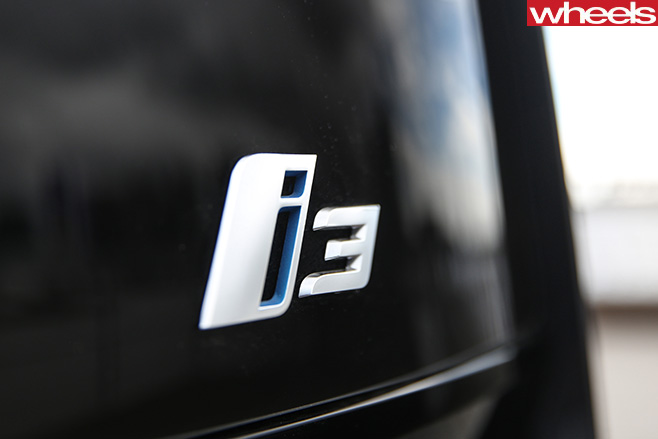 Long-term European owners are able to swap out their 60Ah battery and replace it with a 94Ah, but that’s not possible here yet, although BMW Australia is looking into it.

BMW’s i3 has improved, but in most part the improvements are, just like the fuel it uses, invisible to the buyer. 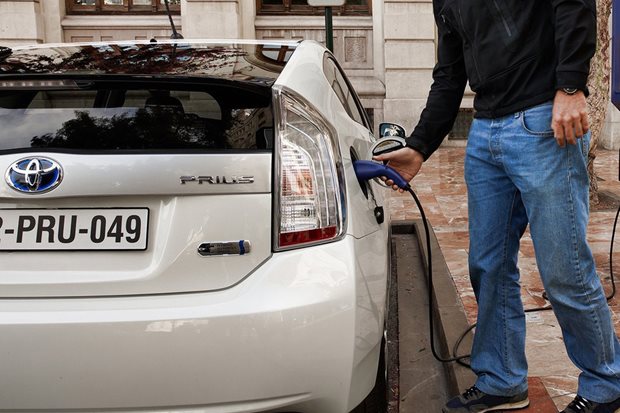 Which type of electric vehicle is right for you?

Cutting down on fossil fuels is a good thing, but there’s a lot more to consider when purchasing an electric, hybrid or plug-in hybrid car.

Private EV and hybrid sales running out of puff