Can the Competition cure the standard M3's ills?

If the latest F80-series BMW M3 was an animal, it would definitely be a cat.

Now that could be a reference to its great agility, quick reflexes or the purr of its straight-six engine, but really it just hates water. More than two years on, memories of the Australian launch, which somewhat unusually took place at New Zealand’s Hampton Downs racetrack, still induce sweaty palms.

Our initial laps took place on a sodden circuit and, to be blunt, in these conditions the new M3 was absolutely hopeless. Much was made at the time of the new 3.0-litre twin-turbo six’s impressive 550Nm of torque, but as soon as it arrived the rear tyres would break into wheelspin, even in fourth gear, creating sudden snaps of oversteer that had the electronic stability control working harder than the Liberal Party’s post-election PR machine merely to keep the car in a straight line. 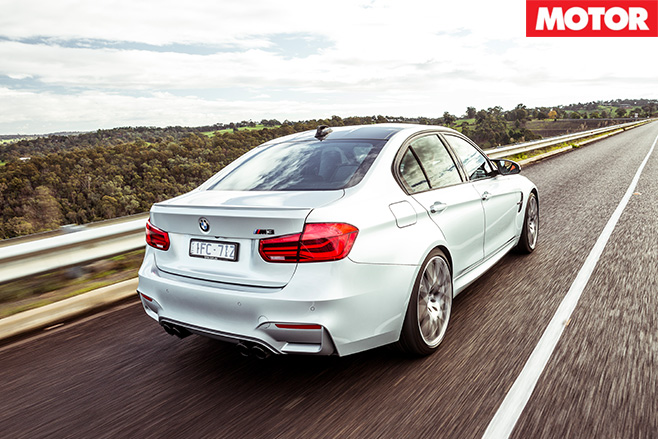 It was an inauspicious introduction, but a sneaky few laps on a dry track during the lunch break hinted at the F80’s ultimate potential. With an incredibly responsive front-end, masses of lateral grip and awesome acceleration, it proved itself faster, more capable and more efficient than its V8-powered predecessor. But the jury was still out on whether it was more enjoyable to drive.

The answer to that question came during that year’s Performance Car of the Year. Languishing all the way down in seventh place between an Audi RS7 and Subaru WRX STI, the M4 (the M3’s two-door twin) was incredibly fast, but also very tricky to drive.

Words like “spooky”, “snappy” and “not what you’ve come to expect of the M brand” were bandied about – it never felt on your side. And it sounded weird, the 3.0-litre twin-turbo six’s exhaust note artificially ‘enhanced’ by the cabin speakers.

Now, however, BMW has channelled its inner Christopher Pyne and claims it’s “fixed it”. Well, actually, it claims no such thing, but the new M3 Competition introduces a number of alterations to the suspension, differential and rolling stock that will, hopefully, improve the F80’s behaviour when driven hard. 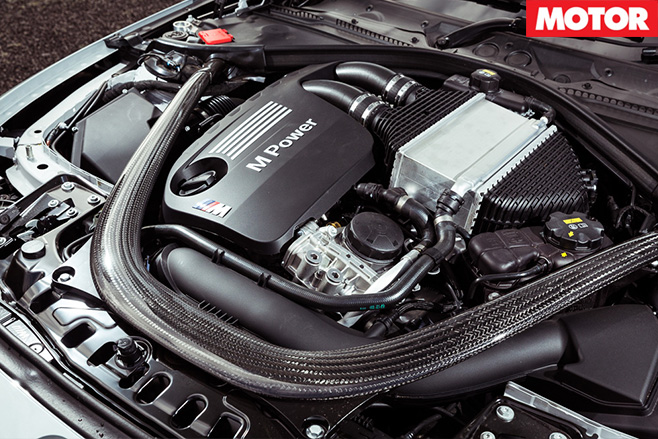 Despite the context in which we’re driving this new Competition, it’s not a hastily introduced upgrade package but a planned part of the car’s lifecycle. Australia’s first exposure to these tweaks was with the F10 M5 and F12 M6, but both the E46 and E92 M3 received the Competition treatment in Europe, with the former particularly well received.

So what does the Competition upgrades consist of? Most of the changes are hidden beneath the skin, however a ‘Comp’ can be identified by plenty of black accenting (badging, tailpipes, windows surrounds, grille, etc) and, most obviously, the new ‘666 M’ rims. The design is shared with BMW’s M4 GTS, but whereas the ultra-exclusive road racer uses staggered sizes (19s front; 20s rear) the Comp wears 20s all round.

Wheel widths are the same as the standard car, but each tyre is now 10mm wider, the Michelin Pilot Super Sports now measuring 265/30 ZR20 front and 285/30 ZR20 rear for a serious footprint; the M3 Comp’s front tyres are as wide as a Mercedes-AMG C63’s rears! 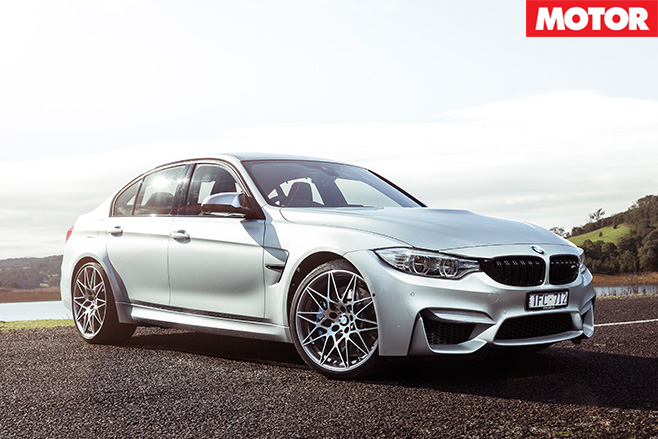 The new wheels look a little odd in pictures, but suit the M3’s chiselled, muscular form perfectly in the metal, as does the Silverstone metallic paint, a subtle colour – sadly an $1840 option – that enhances its Q-car appeal, though the contrasting carbon roof is an obvious giveaway to enthusiasts.

Inside, it’s more or less standard, bar the red, white and blue M stitching on the seat belts and the lightweight bucket seats which lose adjustable lumbar support, primarily because large chunks of the seat backs have been cut away. Both seat and steering column are widely adjustable, which makes finding the perfect driving position easy.

The thick-rimmed wheel is a little chunky, but the classic analogue dials are super clear and much preferable to BMW’s new-fangled digital instruments in the X6 and 7 Series. One unusual feature of this particular car is a third pedal in the footwell. Manual gearbox take-up is only around two per cent in the latest M3 and M4 and whether or not it’s the gearbox of choice is a difficult question to answer. 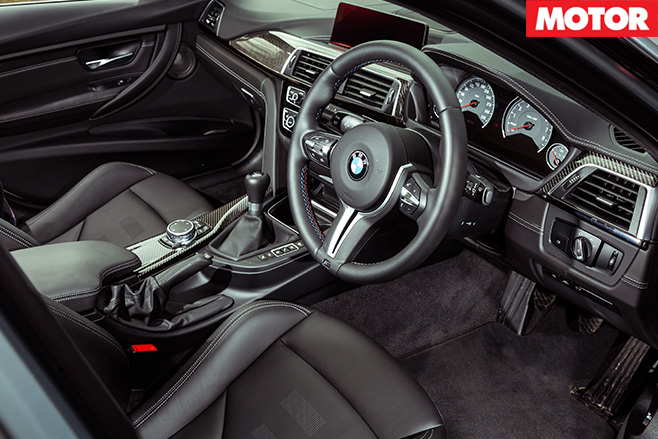 The reasons why will be covered shortly, but BMW does everything it can to remove as much effort as possible from the process of changing gear. Choosing the manual adds 0.2sec to the seven-speed DCT’s 4.0sec 0-100km/h claim, though with either gearbox the Comp is 0.1sec quicker than the equivalent standard car, the academic difference surely as much down to the 10mm wider rear rubber as the engine’s extra 14kW.

This brings the total to an impressive 331kW, though it would take a back-to-back drive with a standard car to notice the extra grunt, particularly as it’s the 550Nm of torque, spread from 1850-5500rpm, that is the dominant engine characteristic.

Our suspicion, as with all these new-generation turbo M cars, is that the M3 is producing significantly more than its claimed outputs, a hunch supported by various overseas outlets having strapped M3s to dynos and discovering they produce between 300-310kW at the wheels.

Despite the addition of the M sports exhaust, it’s still not the most charismatic engine around; the optional titanium M Performance unit adds a healthy dose of E46-style rasp as well as some welcome overrun fireworks, but then it is an extra $9350. 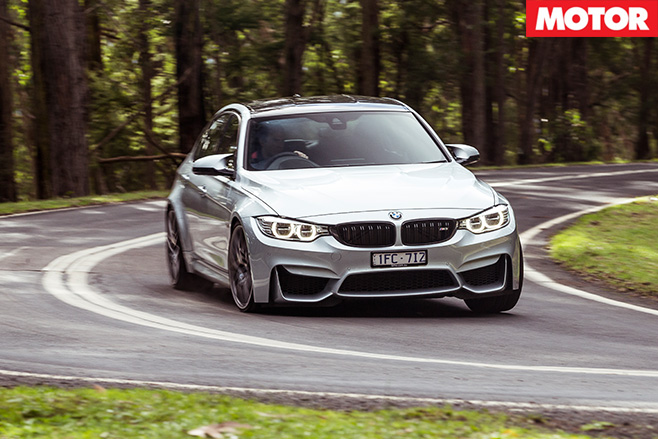 This S55 is also a thirsty beast. No matter what the official numbers say, use the performance of these newgeneration turbo engines and they drink faster than a sailor in port. Logistics prevented us taking accurate numbers, but the fact we went through three 60-litre tanks in nine days should say enough.

It is, however, a staggeringly fast car, with an enormous breadth of power and a willingness to rev that belies its force-fed nature. There is a degree of hesitation at low revs, which the DCT seems to mask better than the manual for some reason, but then every single Newton metre feels like it arrives at once and it’s a wild ride on a tidal wave of torque all the way to the 7500rpm redline.

It’s this sudden surge, and the way the chassis handles it, that causes such problems in the standard car. The power arrives, the wheels spin and the rear jinks in a sudden, abrupt fashion that robs confidence, a trait that’s particularly evident on cold tyres. With warm rubber, traction is much stronger, but you’re never quite sure what the car is going to do next; you don’t know if it will grip and go or keep sliding – and that’s not a nice feeling. 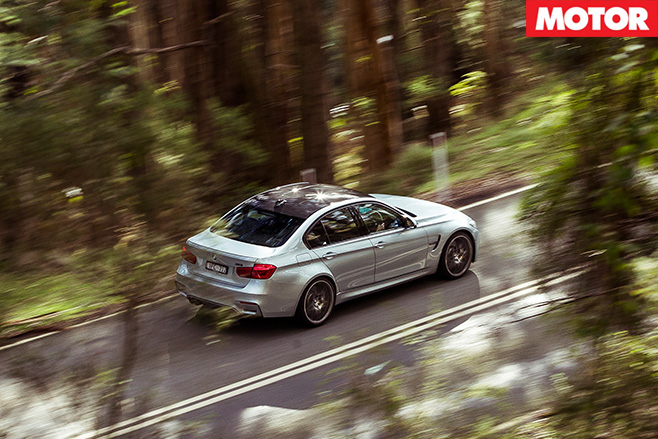 It’s a problem exacerbated by damping that tends to bounce the car over bumps rather than absorbing them. There’s plenty to like about the M3 chassis, particularly the incredible front-end response, great agility (it only weighs 1535kg, after all) and outright grip, but it’s always felt not quite finished.

Unfortunately, when it comes to the specific changes of the Competition setup, BMW is a bit vague. The press material refers to “enhanced” this and “reconfigured” that, but with little in the way of concrete information. What we have gleaned is that spring rates are 15 per cent stiffer, while the Adaptive M dampers are also stiffer, the Comp’s Comfort mode being roughly comparable to the standard car’s Sport.

There are also new anti-roll bars and revised settings for the electronically-controlled limitedslip differential and DSC stability control, the latter sadly a retrograde step. Whereas before the DSC’s ‘M dynamic’ mode would allow a reasonable level of slip before intervening – BMW claimed it would even let you spin the car – it now restricts power at the first hint of wheelspin. 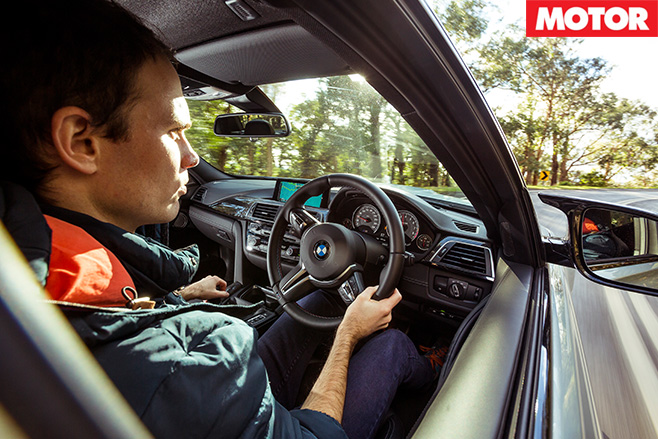 It’s a twofold problem. First, it restricts your enjoyment of the car, as driving with a small amount of wheel slip, whether it be using the throttle to help turn the car in a corner or just skating slightly on the exit of a bend, is a big part of the appeal of driving a powerful, rear-wheel drive car. Second, if you want to experience the M3 Competition at its best, it forces you to drive with DSC off, which is risky in a car this fast.

Thankfully, the M1 and M2 buttons on the steering wheel, which allow you to save your favourite combination of settings, make switching between the two modes a breeze. Personally, M1 is engine in Sport, DSC in M dynamic and the dampers and steering in Comfort for everyday use, while M2 is engine in Sport Plus, DSC off, dampers in Sport for a little extra body control but retaining Comfort steering.

It’s unclear why the Sport and Sport Plus steering modes exist as they require plenty of extra effort for no discernible reward, but some may prefer the heavier weighting.

The good news is that either I’ve become a much better driver in recent times or the Comp changes have indeed tamed some of the M3’s excesses. It feels more controlled, less affected by bumps and lumps in the road, and also easier to control. The transition to oversteer – it’s always oversteer with this car, the front end is more or less nailed to the ground at road speeds – is smoother and a little easier to read. 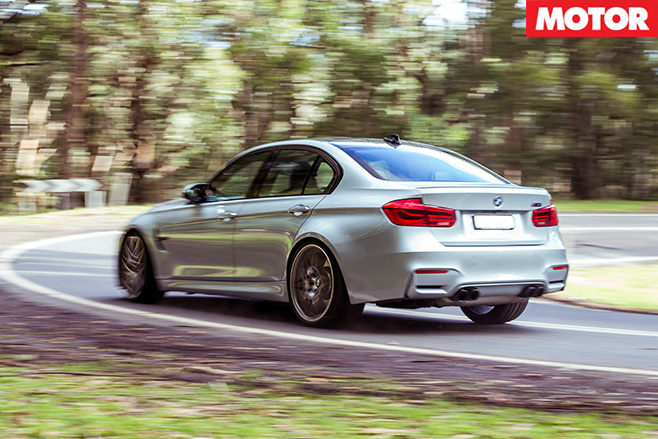 It won’t flatter poor driving, as the force with which the boost arrives means any corrections have to be swift and accurate, but the crucial difference is you can now telegraph what the car’s going to do before it does it. Just why the Competition’s stiffer, sharper setup translates into an easier, more enjoyable driving experience is still a little murky, but in this case the end is much more important than the means.

Equally impressive is the M3’s ride. It’s firm, but compliant enough in Comfort that you’re aware of bumps without being assaulted by them. It’s even tolerable in Sport, though Sport Plus should be saved for the smoothest racetracks.

It’s difficult to avoid the cliché that the Competition is the car the F80 M3 always should have been, but the truth is that while the small changes may only make it marginally more capable, the confidence with which it can be driven makes it much more enjoyable. 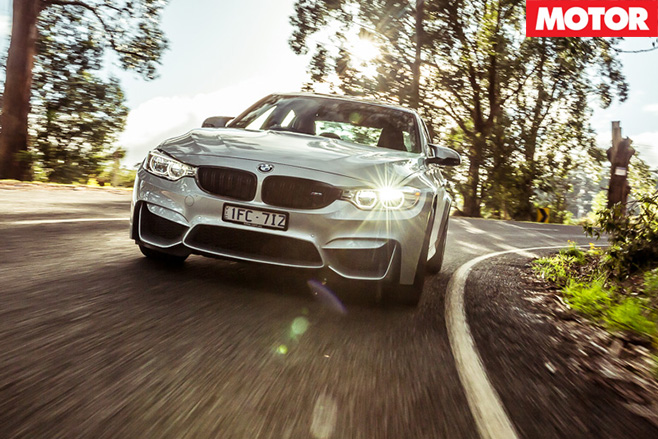 BMW expects around an 80 per cent take-up rate for the Competition, but for our money the relatively small $5000 premium makes it a no-brainer – if you’re planning on buying an M3 or M4, buy a Competition. The M3 is back in business, ready to battle the C63 for the title of king of the jungle.