It may be fashionably late, but the AirBumped Citroen C4 Cactus has finally arrived in Australian showrooms.

WHAT IS IT?
This is Citroen’s funky new foray into the booming compact SUV market. It brings a comical name, funky styling and pragmatic innovation to the table.

WHY WE’RE DRIVING IT
This is our first drive of the Cactus on Australian roads, with both the diesel- and petrol-engined models sampled. 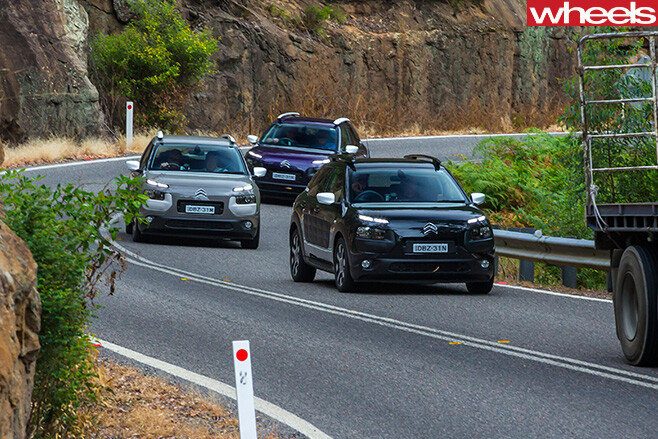 THE WHEELS VERDICT
The Citroen C4 Cactus is unmatched in terms of sophisticated, elegant yet fun ethos inside and out, with great refinement, excellent engines and great packaging. Its dated underpinnings means that it falls short in its mechanical offering and as a result isn’t as convincing to drive or as an ownership proposition.

THE WHEELS REVIEW
THE puns seem endless: Citroen hopes for a sales spike as its new front-wheel-drive compact SUV aims to be a thorn in the side of its rivals. This pun-tastic prickly competitor’s name shows that, even before you’ve clapped eyes on its blunt, narrowed eyed-nose, or poked and prodded the ‘AirBumps’ that garnish its doors, you know that this car is a little tongue in check. And it’s entirely true that the French had no idea that, in local Aussie folklore, when something’s ‘cactus’, it ain’t good. 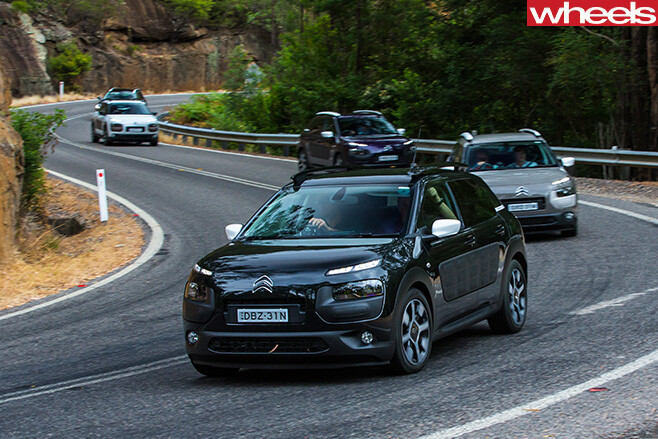 Intrigue, then, is this SUV’s first weapon, but its pricing – announced last October at $26,990 for the manual-only petrol, and $3K more for the auto-only diesel – means it’s up against it. The $23K Mazda CX-3 Maxx owns this segment, and while the Jeep Renegade offers a sense of adventure, its execution is a little more G.I. Joe ham-fisted.

Regardless of engine choice, Cactus’s bold looks come in a single trim level with choices limited to an array of optional colour combos for the wheels, roof-rails and AirBumps. Standard equipment includes 17-inch alloys, crisp 7.0-inch colour display with reversing camera, digital radio and climate control. Lacking, though, is some crucial tech. Most notably, automated emergency braking is not even an option – and then there are the drivelines, which we’ll get to.

Here and now, the cabin is even funkier than the outside. A low, wide dash sees front ‘lounge’ seats connected to form a quasi-bench. They’re super comfy yet supportive. Look further and the Cactus cockpit continues to engage and amuse: those excellent door-pulls that mimic classic leather luggage handles not only look charming, but feel solid and dependable. It’s a stunning interior. The way the glovebox closes, the feel of the switchgear and the finish of the materials is both elegant and sturdy. Doubts creep in when minor irks become apparent: the lack of an auto-down driver’s window, and, in the second row, no air-vents. This won’t help the kids on a hot day, as the rear windows don’t wind down, instead popping out like a commercial vehicle. On the plus side Aussie-spec Cacti have had the bench rear ditched in favour of a 60:40 split-fold seat, as well as top-tether anchorage points, to meet our local design rules. A 358-litre boot makes a mockery of the CX-3’s cargo area, and overall roominess has been genuinely achieved.

Yet the dated bones of the Cactus – it’s been on sale in Europe for almost two years, and based on PSA’s older PF1 platform – rear their ugly head through a lack of driveline choices. The 1.2-litre turbo-petrol engine is offered only as a manual, an antiquated five-speed at that. It’s now that you’ll notice that the retro-cool digital instruments don’t include a tachometer. You’ll also discover a driving position compromised by no steering reach adjustment.

That’s almost forgotten because that three-pot is an absolute gem. Its versatile, funky character comes with a thrummy note perfect for the jester-appeal of the rest of this car, and it works well with the competent yet not slick gearbox. It’s surprisingly quiet at speed, where it cinders to near silence, and there’s little road noise, too. Choose the 1.6-litre four-cylinder turbo-diesel, which Citroen says 85 percent of Cactus pre-sale customers have, and you’ll score and even more economical, torquier engine that’s equally as refined. Sadly, though, the semi-automatic will be a deal-breaker for some, as it’s clunky, dim-witted and not a patch on the six-speed Aisin auto found in the newer PSA models. It’s little respite that the diesel’s 3.6L/100km fuel consumption is class-leading, with the petrol’s 4.7L/100km better than anything CX-3 or the Honda HR-V can muster.

There’s also competent handling to go with the strong engines. On the twisty stuff the nose pitches, there’s a lot of body roll and the Cactus relies on its Goodyears to keep it all together. Around town, its slow-speed ride and refinement is excellent. The steering is light and easy, but lacks communication when things get serious.

A class-leading drive is not what the Cactus offers. Yet Wheels loves cars like this: a fresh approach that delivers an unmatched verve both in and out, with an interior that’s the most sophisticated and engaging in this segment. Where it falls down is in terms of its woeful semi-auto, lack of driveline choices and dated tech. The C4 is a solid contender, but its narrow range and ‘boutique’ pricing mean that it’s unlikely to rattle its main rivals’ cages.

CACTUS CROP
The Cactus went on sale in Europe in 2014, so it’s almost two-years old already. That means that, given the typical life-cycle, it’s due for an update – and may get one within 12 months. The 208 itself is four years old, too, so will likely be the final vehicle using the PF1 underpinnings. The Cactus may not be in need of a styling facelift, but on our shopping list would be the EAT6 Aisin automatic that’s fitted to the DS3 and, more recently, the Peugeot 208 – both cars riding in the PF1 platform. And styling for the next-gen Cactus? Look no further than the AirCross Concept, which will also set the tone for a larger Citroen SUV.