An exquisite interior and smooth diesel engine distinguish the first car from premium Citroen sub-brand DS. How well does the chassis perform in an Australian environment?

WHAT IS IT?
This is the first DS stand-alone car, as Citroen moves to separate its design-centric models into a premium sub-brand and leave the Citroen ‘C’ models for is more mainstream vehicles. This car, though, is an update of the Citroen DS 5.

WHY WE’RE DRIVING IT
This is the first time we’ve driven the DS 5 on Australian roads, following our sample in France back in July 2015. DS has also confirmed feature and spec levels, as well as the $56,990 price for the ‘new’ DS. THE WHEELS VERDICT
The DS5 is handsome vehicle that shows up its opposition as cookie-cutter, conformist machines. Its interior, in particular, is excellent and its diesel driveline is smooth, strong and capable. Yet its harsh ride lets it down both in town and on country roads.

THE WHEELS REVIEW
WHAT was a Citroen DS 5 becomes, with this facelift and spec upgrade, the first DS model in Australia. So it’s a DS 5, period. In the change from Citroen to DS – the new premium sub-brand of Citroen – the 5 has been given an new front-end treatment that includes intricate LED headlamps as well as the ‘wings’ that link the chrome trapezoidal grille and march up the slanted bonnet of this rival for the BMW 3 Series. Or whatever it is, as DS Australia doesn’t seem to know how to describe the body-style of this five-seat model, calling it simply ‘unique’. 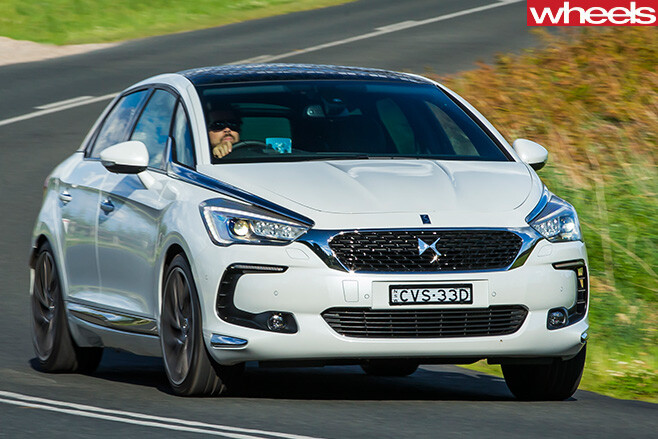 That doesn’t help quantify it for the buying public, but it’s not wrong: this car is a serious head-turner, something to which Mercedes C-Class and Audi A5 buyers won’t be accustomed. Its shape makes it difficult to classify: it’s clearly not an SUV, but it seems too tall and its roofline leads to a hatch that means it can’t be called a C-segment sedan, either.

Under that long bonnet is an upgraded version of the excellent 2.0-litre turbo-diesel common-rail that we’ve seen here in the Peugeot 308 and 508 GT models, along with the smooth EAT6 six-speed automatic. It’s the only driveline sold here in the 5, as the 1.6-litre petrol made up a paltry 10 percent of sales and has been dumped. There are no paddleshifters, but you can change gears via the shifter, although the forward push of the delightful polished gear lever to change up a gear is the wrong way around (ask Porsche). There’s no need; instead, relax as the smooth, refined diesel marches from 0-100km/h in an adequate (surprisingly 0.9sec faster) 9.2sec, thanks to a 13kW and 60Nm increase in its vital stats, now 113kW/400Nm. 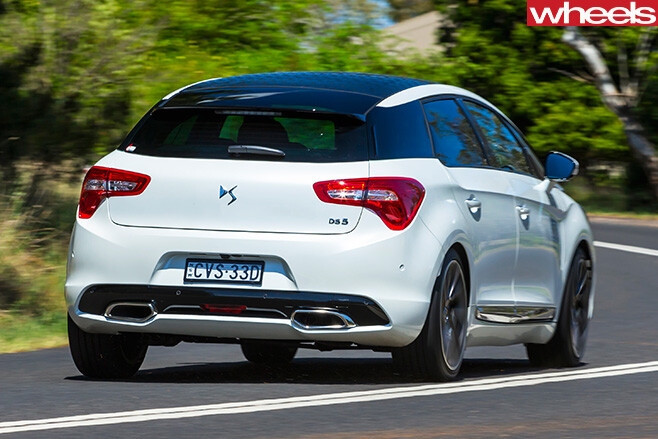 It’s also a more parsimonious driveline, with 4.5L/100km claim (formerly 6.1), thanks to an AdBlue urea tank under the boot floor and an idle-stop system. The latter starts the engine abruptly, but on the plus side doesn’t give even a moment’s hesitation when you want the throttle to respond. That can’t be said around town, when the DS 5 seems to have the occasional lapse in concentration when you’re chasing gaps in traffic.

Get the 5 out of town, though, and every last contour, split, crack and minute undulation is sent back through that four-spoke steering wheel, its sharp angles reeking of wild Citroen cabins of the 1980s. Yet while we’re talking history, you wouldn’t know that the brilliant air-suspended DS is now 60 years old, as the ride in the brand-new 5 has been retuned and is harsh and rough. It’s made worse via the steering, which feels disconnected from the rest of the chassis. 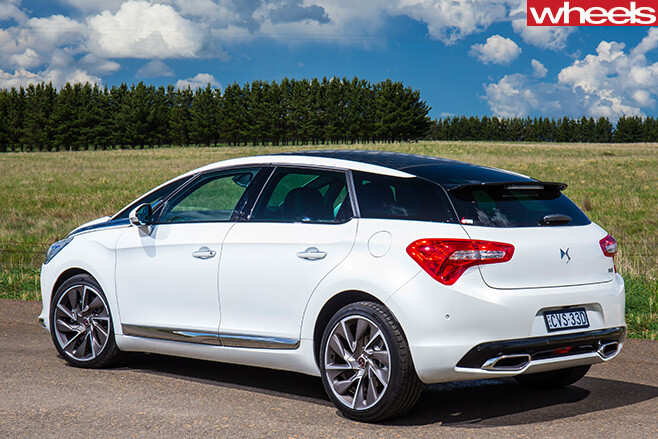 The usual trade-off from a firm ride is handling prowess, but the 5 misses out here, too. It’s not an absolute mess, but there’s loads of nose-lift off the mark with even a brush of the throttle. Excellent seats help counter some of the body roll around corners.

Other than being a well-decorated jumping castle, the interior is exquisite. Every last inch is dripping with design ideas, with stunning material finish, and there’s a standard panoramic glass roof that immediately gives the impression of space. So do the front-quarter windows that flank that raked windscreen, with a deep dash housing the new 7.0-inch touchscreen adding to the impression of size from the front seats. There’s plenty of headroom, and the second-row is roomy enough for most adults, apart from the middle seat. The optional watchstrap leather not only looks great, but is beautifully supple – German cars at this price point simply cannot match it. Nor do they measure up to the excellent switches, textures and coverings throughout, only let down by generic-looking pedals that, frankly, we wouldn’t have noticed had the rest not been so intricate and attractive.

The hardest part of selling the DS 5 is that it’s now $3000 more expensive, at $56,990 including a six-year warranty. That places it in the crosshairs of cars as diverse as the Audi A4 2.0 TDI – which it has far more room than – and Volkswagen CC if you’re chasing more restrained style. So while it can’t pin down what segment it sits in, nor the ride and handling, the DS 5 does have ‘unique’ down to a tee. The 2016 DS 5 chases a historical landmark In the original 1955 DS, but it isn’t a landmark in its own right.