Ferrari turns the manettino dial to 11 for the F12tdf, an extreme version of the F12 which ekes another 29kW from the 6.3-litre V12. Tdf does indeed stand for Tour de France but no, not the bike race.

Ferrari turns the manettino dial to 11 for the F12tdf, an extreme version of the F12 which ekes another 29kW from the 6.3-litre V12. Tdf does indeed stand for Tour de France but no, not the bike race.

WHAT IS IT?
There’s a long tradition of low-volume, high-po specials from Maranello and the F12tdf treads a familiar path, offering more power, poise and exclusivity.  At some point it’s worth asking the question, how much is too much?

WHY WE'RE TESTING IT
Ferrari invited us to Maranello to drive a limited-run F12 with 574kW. A few laps of Fiorano and a pleasant day in the local hills was also on the itinerary. Saying no seemed impolite. 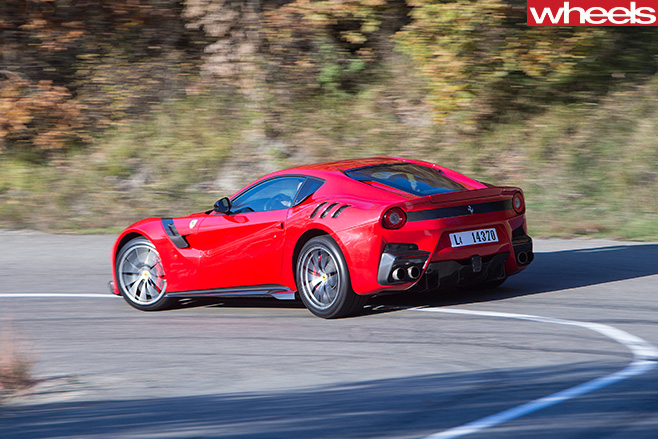 THE WHEELS VERDICT
How the F12tdf drives will be of peripheral concern to many owners who’ll slot it into a large collection, but the driving dynamics of the tdf, more than the window dressing of the ownership experience, are what define the car. Challenging, singular and  intriguingly hair-trigger, it doesn’t suffer fools. Mastering it would provide massive reward.

PLUS: Exclusivity, savagery, depth of engineering
MINUS: Availability, price, neurotic controls will be too much for some

THE WHEELS REVIEW
FERRARI’S F12 never struck me as wanting for power. It really doesn’t feel like it needs more. But here we are: the Ferrari F12tdf, a special version of the F12 that’s limited in production but unlimited in ambition. 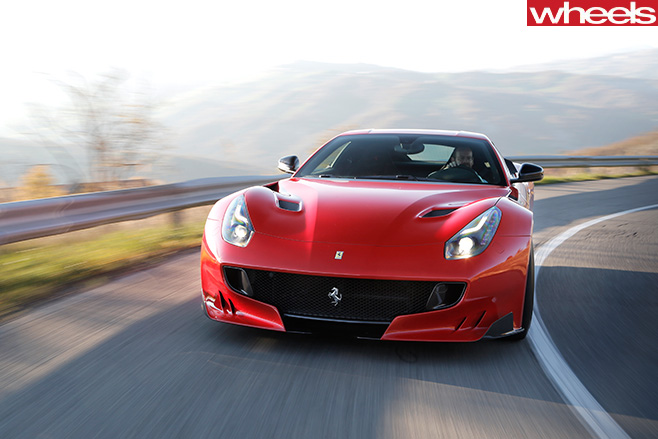 It gets lots more power than an F12 and, thankfully, plenty of other modifications to go with it. Ferrari suggests the 799 F12tdfs that will roll away from Maranello will be just as extreme as the 599 GTO, providing a front-engined Ferrari V12 with hitherto unmatched levels of agility.

There are several ways you can make a car feel more agile, and Ferrari has done all of them. One is adding more poke; another is reducing weight. But the easiest way to introduce agility is simply to fit massive front tyres.

At the start of the development process, Ferrari tried 315-section F12 rears on the front, and even slicks; the result was hilarious but perilously unstable, which meant they couldn’t just leave it like that. Well, not entirely. 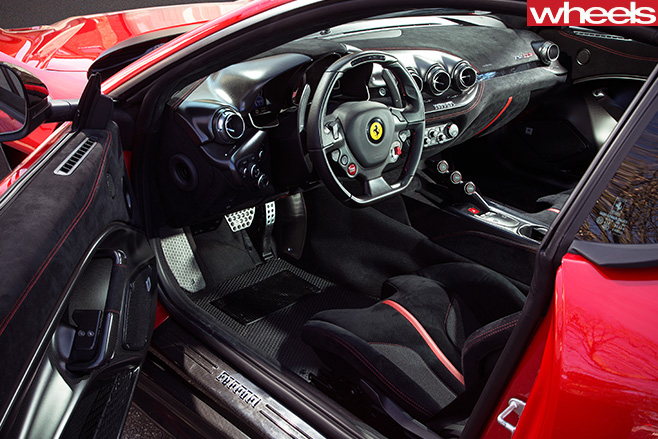 The marketing men like to use an aerospace analogy: in the same way that a modern fighter jet is designed to be inherently unstable so that it’s incredibly agile, so too was the F12tdf.

Where a modern fighter uses electronic control systems to make it flyable, Ferrari uses active rear steering to make the F12tdf driveable again, putting stability back in. But it’s the wider front tyres (285 section rather than 255s) that increase agility and make the car feel shorter.

So significant are these changes that the rest are mere details. Aerodynamics are improved, the rear track is wider, gear ratios are five percent shorter (reducing the 0-100km/h time to 2.9sec) and spring rates are 20 percent stiffer. 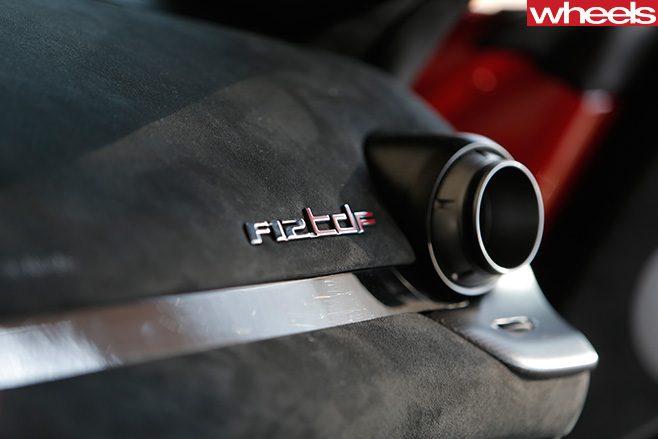 Ferrari admits its special V12 models aren’t simple to jump into and drive quickly – not like the standard mid-engine V8s – and the F12tdf takes some learning before you feel completely comfortable. It retains the F12’s steering rack (two turns lock-to-lock), but because of the wider front tyres and stiffer suspension – even in Bumpy Road mode, it’s always firm – it feels more connected and responsive than a regular F12. So in many ways it’s easier to drive. Out in the hills around Maranello, the F12tdf steers with ease and precision; it’s a big car but one that’s easy to place.

And it has an utterly magnificent powertrain. Untroubled by turbochargers yet still developing 80 percent of torque from 2000rpm, its response is fantastic, it makes a glorious noise like an F1 car of old and the seven-speed dual-clutch auto has been tweaked to shorten shift times. Response is, on occasion, too sharp at the top end – even Ferrari’s test drivers think as much – but the engineers want the F12tdf to feel like there’s some racing car in it. 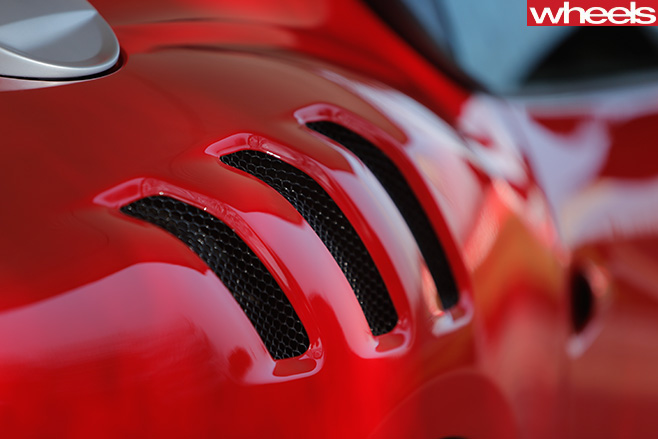 It’s on a circuit, though, nearer the car’s limits, where the idiosyncrasies of the F12tdf’s handling, and the phenomenal response of the engine, come further into consideration.

In most front-engined, rear-drive cars, you know what you’re going to get on a track. You have to settle the nose on approach to a bend, trail the brakes slightly to reduce understeer and unsettle the rear, then drive through nicely under power, applying just the amount you want to adjust the car’s attitude.

The F12tdf isn’t like that; there’s not really any understeer to drive around in the first place. The additional front tyre width makes it feel hyper-agile, so it darts for the apex, but then, when you expect the rear to become unsettled, the active rear steer intervenes and makes the back end more stable, keeping the rear trimmed to the same apex as the fronts at a speed you just couldn’t match in a car without the system. 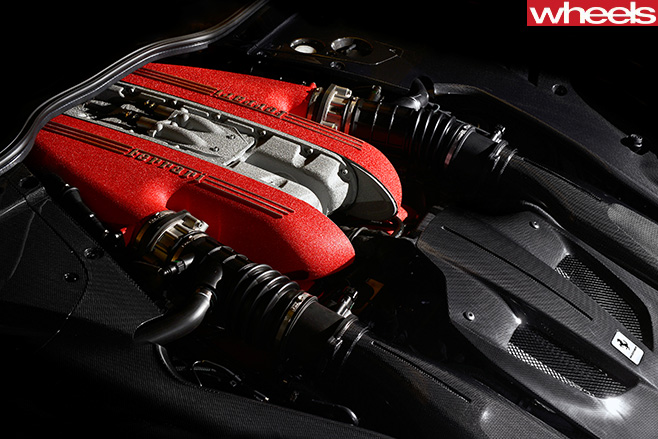 Mind you, with any significant application of throttle – and it doesn’t take much with this
much power – it will still light up the rears, at which point the increased speed, the instant response of the engine and whatever the rear is up to conspire to make it feel not altogether natural.

With more familiarity, you learn to anticipate the F12tdf’s characteristics, drive with more fingertippy touches and smaller inputs, and then it becomes deeply rewarding. But it’s not a car that you can just enjoy easily. I’d need more laps to know whether it was more rewarding than a well-sorted and conventionally set-up car.

No question, though, it’s incredibly impressive. There’s loads to love here. It’s just unusual at times. But given that it’s meant to be challenging and that an owner will have plenty of other cars to choose from, depth and unusualness are characteristics the F12tdf can easily afford to have.

Would I have an F12tdf over a Lamborghini Aventador SV? Undoubtedly. Over a McLaren 675LT, which I rate as a five-star car? It’s a very close-run thing. 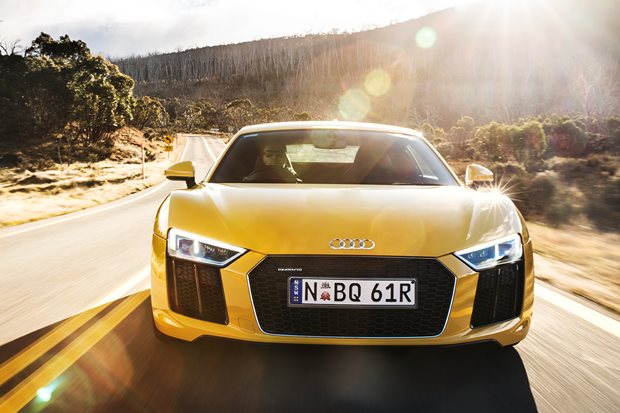 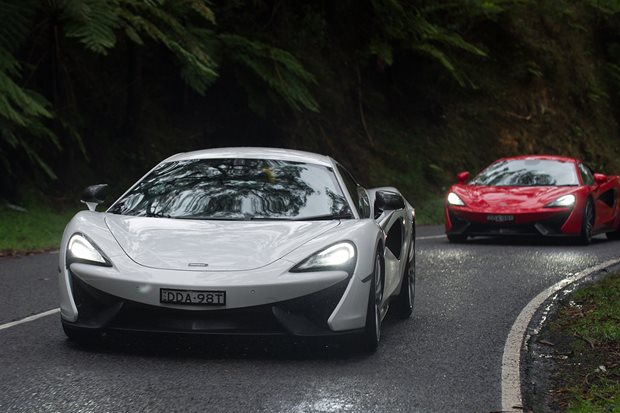 Making the case for less really is more 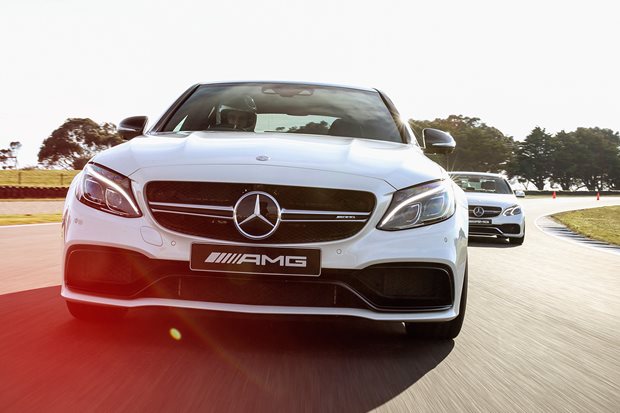 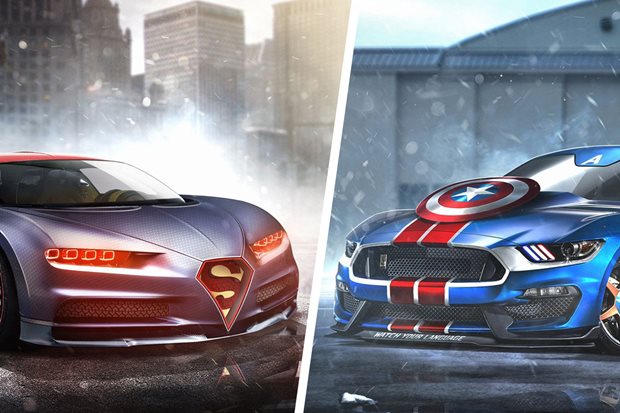 Batman trades the Batmobile in for a BMW M2, Superman, Spiderman and Wonder Woman live the supercar high life, and Deadpool is doing it tough in mum’s tricked-out Mondeo.