Ferrari has replaced the slightly ugly, lightly underwhelming FF with a new four-seater super family car; the GTC4Lusso. It’s faster, nicer to look at, far more beautiful inside and cheaper. And its 6.2-litre V12 is still naturally aspirated. Rejoice!

WHAT IS IT?
A Ferrari for people with children, apparently. Rich, spoiled children who get to go skiing a lot. The ability to tackle icy conditions is why this car gets all-wheel-drive and, with the company’s management having made it clear they'd rather choke to death on bad espresso than build an SUV, this is about as close as they’ll get. It’s also $578,888. Ouch, yes, but the FF was $625,000.

WHY WE'RE TESTING IT
A V12 engine with more than 500kW, and no turbos, is a pretty tempting proposition for a start, but effectively this a nearly new Ferrari and thus a car of great interest. And they launched it in the Dolomites in northern Italy, which is a jaw-dropping place to drive any car, let alone a super car. THE WHEELS VERDICT
The FF was a limp and disappointing effort from Ferrari that felt like they didn’t really believe in the four-seat, four-wheel-drive concept they were selling, but the Lusso feels like the fully formed article. It’s beautiful inside and out and truly impressive to drive, largely thanks to technologies that make it feel smaller and more manageable than its numbers would suggest. Quite possibly the perfect family car – if it wasn’t so stupidly expensive.

PLUS: Design; style; interior luxury and tech; natmo V12 power; noise; steering and handling.
MINUS: Price; a little too quiet and refined for some tastes; expensive options. 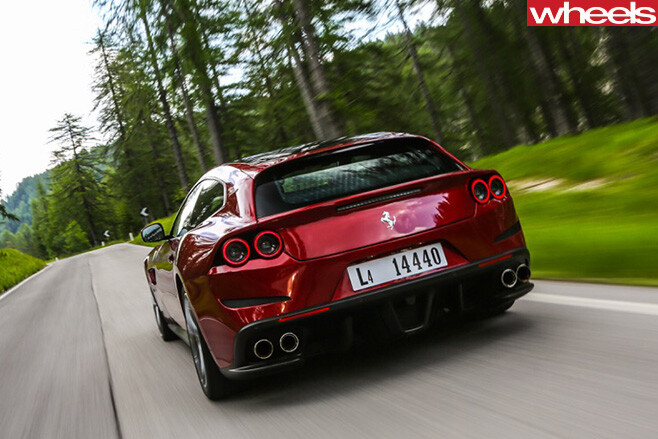 THE WHEELS REVIEW
AS SOMEONE who spends a lot of time in the passenger seat of fast cars, praying his colleagues won’t kill him, I am utterly besotted by the Ferrari’s GTC4Lusso’s “co-pilot” concept.

“In a normal sports car, a passenger is just weight, and weight is against performance, but this customer likes to share the performance so we give the same dignity to the passenger, we give him the same information, he's more of a co-pilot,” as the Ferrari boffins explain it.

In practice, this means that the Lusso’s jump seat looks and feels very much like the driver’s one, and gets its own, beautifully realised Passenger Screen, which can display everything from speed, revs and gear selection to a Manettino readout that shows you what the diff and various traction systems are up to. 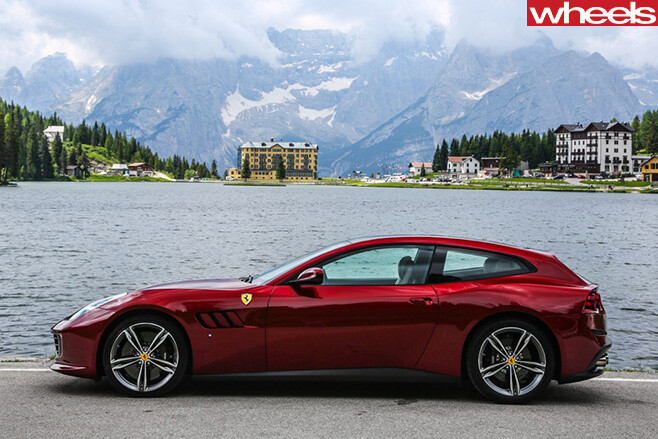 I loved it – in a deeply nerdy way – and enjoyed keeping an eye on my co-pilot, John Carey, as he hurled me through the Dolomites, a particularly beautiful part of his beloved Italy.

Sadly, stupidly, this wondrous feature is an option, and costs $9500. That’s a bargain, of course, next to the Panoramic Sunroof, which, at almost two square metres, creates a fantastic sense of spaciousness, particularly from the cosy back seats, but will set you back $32,500. Yes, really, they want that much to put a glass roof on your $578,888 family car.

On the plus side, the rest of the interior, which really does feel light and yet solidly expensive, and is a cut above previous Ferraris, comes as standard, including the big new 10.5-inch central screen, which gives the whole cabin a modern feel. 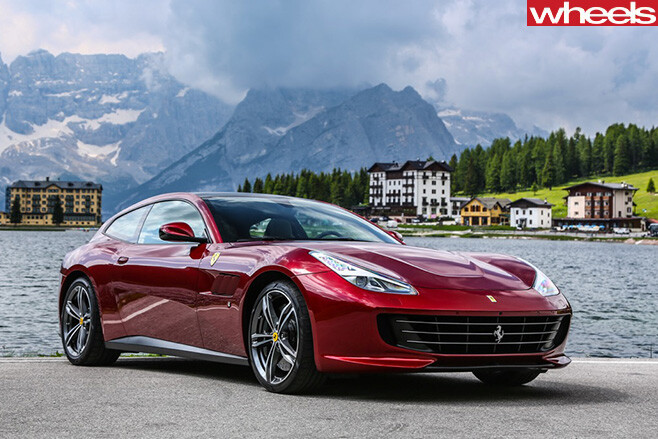 The multi-touch functionality is almost iPad like, but some of the software is not quite Apple-level, sadly, although CarPlay looks great on it.

A similar job of beautification has been done on the exterior, which is a big step forward from the FF. It really looks elegantly powerful from most angles, and classically Ferrari from behind or dead-on in front. Only from the rear three-quarter are you really struck by its shooting brake dimensions; at 4.9m long and just over 2m wide at the mirrors, it's a monster, and it also weighs an SUV-like 1920kg.

Shifting all that pricey metal and leather is a doddle, of course, for the naturally aspirated and gloriously tuneful 6.2-litre V12, which delivers a coccyx-clattering 507kW and a slightly less impressive 697Nm, 80 per cent of which is on tap from 1750rpm (the lack of turbo torque is noticeable, now that we’re so used to it, but it just means you need to shift gears a bit more vigorously). 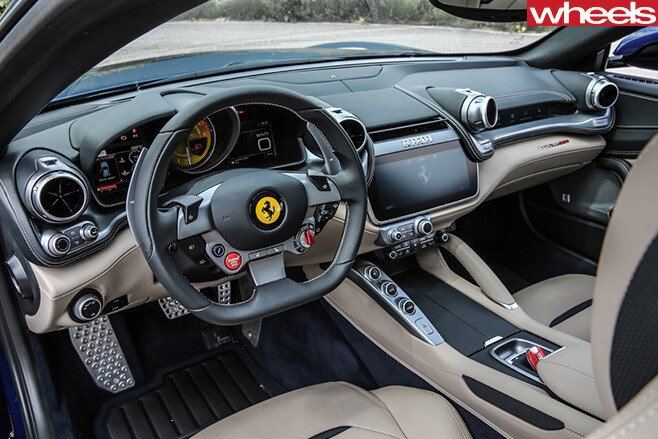 The driver’s seat is where you really want to be, of course, because it’s here that you can appreciate the work the dynamics department has done. Your initial impression when attempting to corner quickly is of weight and size and wondering whether this can possibly work.

So clever are the various software systems beneath you, and the 4RM-S in particular, which combines four-wheel-drive torque distribution with four-wheel steering, that the Lusso feels smaller and sharper than it should. You expect understeer, but it doesn’t come, so you push harder, predicting some oversteer on corner exit, with all that grunt, yet it doesn’t overpower you either. Soon you find yourself attacking windy roads at crazy speeds and shaking your head in disbelief at what the GTC4 is capable of.

We didn’t get to try it on the snowy roads it is largely designed for, but apparently it can now shift up to 90 per cent of torque to the front wheels for slippery-surface stability, which sounds all wrong, and non-Ferrari, but no doubt works brilliantly.

While the steering can feel artificially weighted and a bit sloppy in Comfort mode, switching to Sport tightens it up nicely and adds to the fun. The Lusso is no mid-engined super car, of course, and if you didn't need back seats you’d take a 488 every day, and twice on weekends, but it really does display plenty of Ferrari DNA.

The one bugbear, however, is that it’s been designed to be quiet and polite around town, with an exhaust bypass valve that mutes all that fabulous V12 noise until you’re really on the gas.

Apparently the family focused buyers of this car don’t want an engine that will “frighten the children”, so instead you get one that sounds a bit agricultural and unexciting at low speeds, which seems a terrible waste.

At high speeds, or with enthusiastic throttle applications, of course, it sounds simply stupendous, as a Ferrari should.

Overall, the GTC4Lusso isn’t just a worthy replacement for the frumpy FF, it’s the car it should have been in the first place.