New name and a new face signal a fresh start for the Colorado 7, re-engineered as the Holden Trailblazer.

WHAT IS IT?
A major mid-life facelift for Holden’s separate-chassis, seven-seat SUV, twinned with similar changes wrought on the Colorado ute. Three years in the making and now badged Trailblazer, Holden’s Thai-built, Aussie-developed wagon wants to make amends for its rough-and-ready past with newfound comfort and refinement.

WHY WE’RE TESTING IT?
Hot on the heels of the facelifted Colorado ute, the Trailblazer needs to be more than just a workhorse in drag. But its quest for banishing rough edges can’t be at the expense of its three-tonne braked towing capacity or its off-road ability.

MAIN RIVALS
In concept, it’s the closely related Isuzu MU-X, as well as Ford Everest, Toyota Fortuner, Mitsubishi Pajero Sport and Nissan’s ancient Y61 Patrol, though at just $52,490 for the range-topping LTZ, Trailblazer undercuts some of its rivals by a massive margin. THE WHEELS VERDICT
Much more than just a new nose and a new nameplate, the Trailblazer does a surprisingly good job blending undoubted towing and rough-road nous with tangible on-road refinement. Consistent steering, a very good ride for a separate-chassis truck, and respectable handling for its type says Holden’s determination in pushing for greater comfort and class has paid off. Only a lack of steering reach adjustment, and the resultant awkward driving position for taller folk, exposes Trailblazer’s working-class roots.

THE WHEELS REVIEW
AUSSIES have always appreciated ruggedness. Whether it’s a bloke who knows how to stump a fence or a car that never quits, there’s something about having the ability to tackle any challenge that rallies our troops. How else do you explain the rise of the separate-chassis, seven-seat SUV? Holden joined the fray four years ago with the Colorado 7 which, as its name implied, was a Colorado truck chassis with a wagon body bolted on top. And the outcome was an agricultural, cheaply finished, bargain-basement chariot at odds with the sophistication being pedalled by Holden’s brand-defining Holden VF Commodore.

It’s amazing what three years of intensive re-engineering can achieve, however. Colorado 7 is out and Trailblazer is in, sporting handsome new styling from the windscreen forwards (front guards apart), new 18-inch alloys on the flagship LTZ and a heap of refinement-focused upgrades designed to introduce some decorum to the Trailblazer experience.

Co-developed with GM Brazil and Thailand (where Trailblazer and Colorado are built), but driven by our market’s more sophisticated demands, with final suspension sign-off completed in Australia, the Trailblazer is a substantially different vehicle right where it counts. 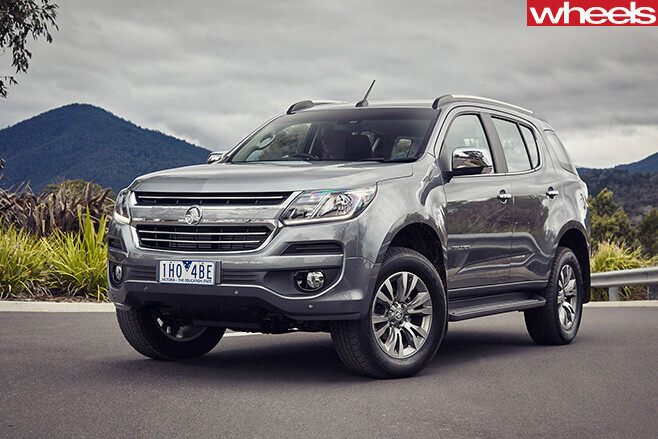 A new damper tune (by Rob Tribiani at Holden), revised body mounts, retuned electric steering with a faster rack (down from 3.4 to 3.29 turns lock-to-lock) and new-compound Bridgestone Dueler tyres (for improved ride comfort and wet-surface grip) doesn’t sound like much, but the reality is a much more comfortable, capable SUV.

Despite the limitations of its body-on-frame design, live rear axle (admittedly with five links and coil springs) and three-tonne towing demands, the Trailblazer does its best to overcome those obstacles on rough surfaces. You can still sense a fair amount of unsprung mass, but the Trailblazer’s damping finesse means it remains nicely controlled and relatively level, without the jiggly pitter-patter that so often undermines this type of vehicle.

Hell, it’s even a bit of fun when the red mist descends. While Trailblazer’s steering remains far from sharp, it’s consistently weighted and firms up naturally in corners, guided by a carry-over steering wheel that feels less putrid than it looks. And there’s an innate balance to the Trailblazer’s chassis that transfers load onto its rear end in faster corners for confidence-inspiring, effortless country-road motoring. 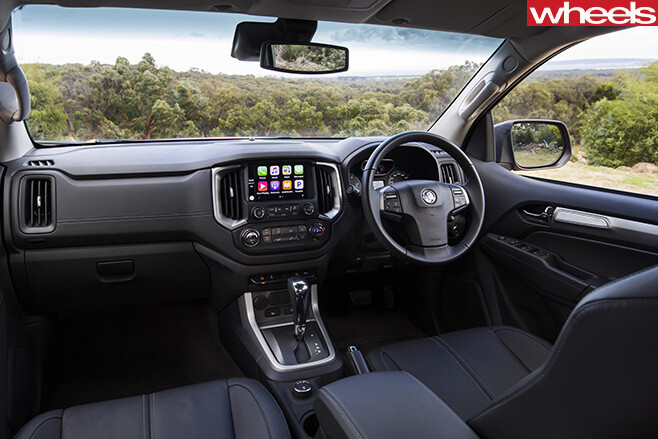 It’s quiet too. Thicker front door glass, additional or enhanced sealing, an engine acoustic pack (including relocation of its twin balance shafts) and a Centrifugal Pendulum Absorber torque converter that irons out unwanted vibrations and allows a far-greater locking range, all transform the Trailblazer auto’s refinement.

Gone is the engine grumble of yore, replaced by a drivetrain that delivers determined, lag-free punch off the line, bags of mid-range torque and a slickness of response to the 2.8-litre turbo-diesel’s manner that is unexpectedly polished. Upshifting seamlessly at peak power (3600rpm) gear after gear, the Trailblazer’s six-speed auto will also deliver manual downshifts as early (and smoothly) as it possible can, meaning proper engine braking in challenging conditions.

But the cherry garnishing Trailblazer’s newfound refinement is its interior. A brand new dashboard banishes the Colorado 7’s horrid cabin ambience to the rubbish heap, replaced by a neatly symmetrical, nicely constructed and quite classy arrangement that looks and feels first-world GM, rather than a third-world cast-off. Only the lack of steering-wheel reach adjustment, and the corresponding compromise this demands of your driving position (even with six-way electric seat adjustment in LTZ) undermines Trailblazer’s cabin cred. This time, however, lots of kit for the price isn’t the only attraction of Holden’s seven-seat, separate-chassis SUV. Bland rear styling aside, the Trailblazer is a handsome, comfortable, capable and eminently driveable family truck with a level of refinement that belies its rudimentary architecture. It’s a more relaxed (and far cheaper) SUV than Ford’s Everest, and that’s what makes it good.