There's a V8 version of the Genesis prestige sedan in America and Korea, so why didn't Hyundai Oz stamp its passport?

WHAT IS IT?
The Genesis is Hyundai's more affordable rival for European prestige sedans such as the BMW 5 Series, Audi A6 and Mercedes-Benz E-class.

WHY WE'RE TESTING IT
This is the one that got away. When Hyundai Australia built its business case for the prestige Genesis sedan, it chose to bring only the 3.8-litre V6 rather than offering the 5.0-litre V8 as well. We wanted to know why.

THE WHEELS VERDICT
The Genesis V8 has the performance and character to stand above its V6 brother, but it would need a lesson in road manners to work as well in Australia. THE WHEELS REVIEW
WHY didn’t Hyundai bring the Genesis V8 to Australia? It’s a 5.0-litre V8, in a rear-drive prestige sedan.

We Aussies have an affinity with such beasts, so surely it was a no-brainer. And yet Hyundai Australia plumped for just the 3.8-litre V6.

Having spent the past five months in an Oz-spec Genesis V6, I can tell you it’s not short on herbs. So that clearly wasn’t a strong motivating factor. And Hyundai says the V8, which sells mostly in North America, had not been engineered for right-hand drive. To do so, it says, would have added too many millions to the program’s cost.

But still, what if the Genesis V8 had been engineered for RHD from the outset? Would it have contributed significantly to the car’s appeal? I had to know. So on my way to the Detroit show, I detoured to California to find out.

The V8’s extra 84kW and 113Nm is immediately noticeable, even though the car weighs 170kg more than the top-spec V6 sold in Australia. It accelerates more vigorously from standstill and is more generous in its response to throttle inputs. 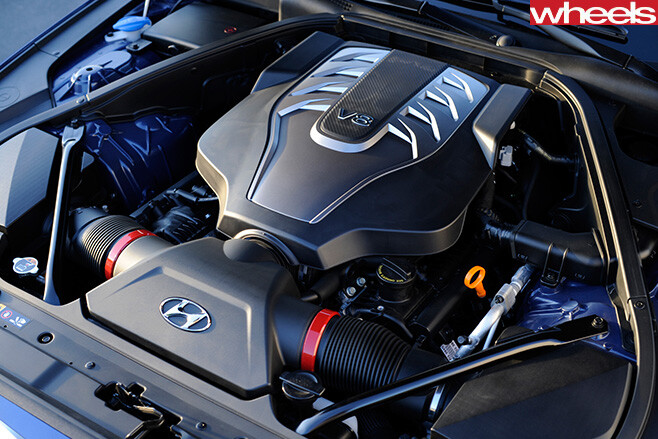 If, like me, you reckon 170kg seems like a lot of weight for two extra cylinders in an alloy block, you’re right. The V8 model also has bigger wheels and brakes, and considerably more equipment. Most obvious from the driver’s seat is the iDrive-style controller. There’s nothing inherently wrong with my long-term V6’s dash-mounted buttons, but interacting with the touchscreen involves reaching, whereas the V8’s controller doesn’t.

Other equipment is not so obvious, but obviously welcome, like lane-keeping assist (Aussie V6 thrums the wheel when you stray; the US V8 steers as well). And there’s a traction-control button, too, in which ‘Off’ really means off.

There’s little difference with in-cabin refinement – the visual and tactile kind, and the on-the-move kind. Materials and finish are top-notch, the driving position spot-on.

The V8 engine is barely audible during normal driving. Press harder and a pleasing V8 burble is evident but still restrained, as befits a prestige sedan. Give it full wellie and there’s noticeably more kick, but not as much as you’d expect with 30 percent more capacity, and it doesn’t feel like the 1.8sec 0-60mph difference one US mag claims between the V6 and V8 (7.2 v 5.4).

The eight-speed auto lacks the smarts to really leverage the V8’s stronger bottom end. The gearchange mapping feels out of step with the engine’s charms. It’s also not as smooth as my V6. Dynamically, the Genesis V8 possesses the same innate stability and confidence as the V6. Its larger 19-inch tyres provide plenty of grip, and the extra weight doesn’t handicap it much in corners; just a touch more bodyroll. The front-end has decent bite, though is devoid of feel.

The ride, however, is less than stellar. Overly busy and sharp, particularly at low speeds, it’s a weakness for a prestige sedan. It’s also a pointed reminder that Hyundai Australia’s local tuning efforts, which deliver a more absorbent and more controlled ride, are to be applauded.

That’s not a deal-breaker, though. If it were to come Down Under, Hyundai Oz would surely fettle the V8’s manners. It’d make a pretty decent flagship, too, with that extra performance and equipment. But business cases are about numbers and it’s hard to see the V8 adding much to the V6’s 50 sales per month. Not enough to recoup the cost of a RHD program.