Infiniti’s big premium car is better value than ever. But the brand steers its own course on limousine handling and ride.

WHAT IS IT?
The 2016 Infiniti Q70 is a freshly facelifted version of the brand’s Japanese designed and built player in the Euro-dominated large luxury car segment.

WHY WE'RE TESTING IT
The updated Infiniti Q70 is the first arrival for 2016 from the Nissan luxury car arm, and will be joined by a series of new models this year, including the Q30 compact premium hatchback and QX30 SUV. The brand hopes its broadened line-up and new capital city dealerships will lift its profile. 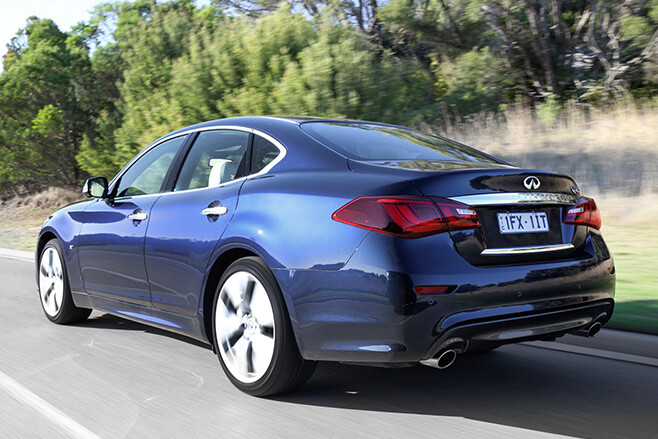 THE WHEELS VERDICT
A sportier exterior look (while the interior is largely unchanged) and new technology centred on safety make the 2016 Infiniti Q70 better value than the model it replaces. In facelifted form, it continues to offer lots of space and equipment and a decent level of interior quality and refinement. THE WHEELS REVIEW
TODAY’S premium-large establishment believes it needs to offer both a pampering ride and a sports-sedan drive.

But the 2012 relocation of Infiniti’s headquarters from Yokohama, Japan, to status obsessed Hong Kong served to underscore that the brand is not so sure about that with its Q70.

The Infiniti Q70 has solid fundamentals. Its big rear-drive platform possesses DNA from parent Nissan’s 370Z and GT-R, and is underpinned by double A-arm front and multi-link rear suspensions. 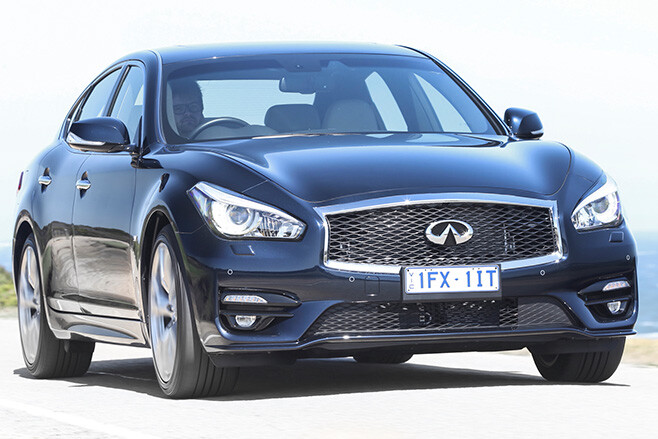 The Japanese sedan turns in with speed and immediacy that’s almost disconcerting, assisted by the Sport Premium’s active four-wheel steering. And it powers with authority via a seven-speed automatic. Curiously though, even though this is the most potent version – and the most costly at $82,990 – it misses out on the four-pot brakes, sports suspension and big wheels, rolling instead on 18s.

The entry-level GT, like the Hybrid, drops the sports pretensions (and features) and emerges with a distinctly different personality. Without the petrol-electric Q70’s speed, it’s a cruiser that offers more relaxed steering and a more supple ride.

The variants align, however, by being entertaining as long as you don’t ask for too much in the way of poise, involvement or polish. Particularly on tight and/or bumpy roads, because the Q70 cabin is quieter than it is cushy, especially on the sports suspension and 20s. Where the Q70 excels is in cabin space and appointments, features and value. While the appointments have changed little in the facelift – the broad cabin already boasted semi-aniline leather, 10-way powered, heated and ventilated front seats and a heated steering wheel on a powered column – the features and value have changed, thanks to carried over pricing and big boosts in equipment centred on safety and fashion.

Ultimately, though, the Q70’s sports/luxe indecision means it falls short of Europe’s best against either measure.