THE birthplace of the posh SUV spawns a surprisingly roomy and entertaining nemesis for the Porsche Macan and Audi Q5 – the Jaguar F-Pace.

WHAT IS IT?
The British marque’s first-ever SUV, 13 years after Porsche proved there was money to be made – lots of it – in leveraging a sports car’s brand image via a family-friendly ‘4WD’. Like others in its field, the Jaguar F-Pace will also be available in rear-wheel drive, and a manual gearbox, however Australia will be exclusively all-wheel drive and automatic.

WHY WE’RE TESTING IT?
Jaguar has made big claims about the F-Pace, including Macan-rivalling dynamics and class-beating space. In fact, the F-Pace owes quite a lot to the Macan and its benchmark handling and driver appeal. Having appeared late in the F-Pace’s development cycle, Jaguar’s engineers were determined to produce an SUV that could (literally) stand tall alongside the Stuttgart stormer, while maintaining Jaguar’s long-held reputation for comfort. This is our first international drive of the F-Pace.

MAIN RIVALS
Porsche Macan, Mercedes-Benz GLC and GLC Coupe, Audi Q5 and SQ5, BMW X3 and X4, and, inevitably, Land Rover’s Discovery Sport. But thanks to the F-Pace’s class-straddling size, it will also compete against the BMW X5 and Mercedes-Benz GLE.

THE WHEELS VERDICT
Interesting enough to stand out from the crowd and roomy enough to genuinely succeed as a family truckster, the F-Pace is an impressive all-rounder with the polish you’d expect from an SUV as crucial as this is for Jaguar. A Porsche Macan might be sportier, but the F-Pace is far from shortchanged in that department. And thanks to the strength of its drivetrains and the breadth of its dynamic finesse – garnished with plenty of F-Type in its styling – there’s a strong chance the F-Pace will become Jaguar’s best-seller.

THE WHEELS REVIEW
NEW month, new luxury SUV. And from the least likely suspects, too. So far this year we’ve seen the Bentley Bentayga and Maserati Levante, and in the pipeline is Lamborghini’s exotic Urus, but we’ve just driven arguably the most relevant, and certainly the most affordable, of the lot – the Jaguar F-Pace.

Sharing its D7A architecture with the compact XE and larger XF sedans to keep the cost and speed of manufacture in check, Jaguar’s first-ever SUV is a close relative of both those cars under the skin. But on the surface, the F-Pace is all about its F-Type-inspired curves, and the dynamic reward they promise.

Given its XE and XF DNA, it is no surprise the F-Pace knows how to devour a challenging road. Neutrally balanced and tenaciously grippy, the F-Pace has a very natural and flowing dynamic personality. Even when driven hard on really tight roads, the sportier F-Pace variants (R-Sport and S) maintain their cool with well-contained bodyroll and disciplined body control, and that’s even on the adaptive suspension’s ‘Normal’ setting. Dial up ‘Dynamic’ and the F-Pace’s keenness to change direction is enhanced, though really bumpy roads can make this setting a step too far.

All that applies to the luxo Portfolio, riding on slightly softer suspension, as much as it does the R-Sport and S, though the Portfolio is more prone to understeer when pushed really hard and has the occasional moments of float.

While the F-Pace was never going to match the poise and panache of the brilliant Jaguar XE, for an SUV standing almost 1.7m tall and approaching 1900kg, it does a bloody good job blending a firmly damped but comfortable ride with well-weighted, accurate steering and really confident cornering prowess.

It goes pretty hard, too. On offer at the top end is a trio of 3.0-litre V6s – two supercharged petrols in 250kW and 280kW tunes (each with 450Nm of torque) and a 221kW/700Nm twin-turbo diesel. The oiler is available in all trim levels (Prestige, R-Sport, Portfolio, S and a launch special dubbed First Edition) whereas the 280kW blown petrol is offered only on the S and Launch Edition.

None of them lack in the pants department, though the high-power petrol is clearly the enthusiast’s choice. With a lovely bent-six exhaust rasp between 3000 and 4000rpm, and a rich vein of linear accelerative thrust, it hustles the F-Pace along with ample urgency, though its throttle ‘tip-in’ in Sport mode is too aggressive, and can instigate understeer when the F-Pace is loaded up in a corner and you unintentionally dial in too much throttle.

The twin-turbo diesel is similarly effective in full-bore driving (0-100km/h in 6.2sec), though it’s the 700Nm of torque (at 2000rpm) that really does the talking. Capable of lugging the F-Pace uphill with as little as 1000rpm on board, the V6 diesel’s refined, unstressed nature is the perfect companion for an SUV such as this, while drinking just 6.0L/100km on the EU combined cycle.

There’s also a four-cylinder F-Pace running a 2.0-litre turbo-diesel hailing from JLR’s new Ingenium engine family. On its Pat Malone until a turbo-petrol sibling joins the ranks in 2017 (apart from China, which gets the Ford-derived 177kW 2.0-litre from the XE 25t), the Ingenium diesel produces a solid 132kW/430Nm, enough to shift the AWD F-Pace to 100km/h in 8.7sec, while sipping just 5.3L/100km on the Euro fuel cycle.

The four-pot Ingenium lacks the V6 diesel’s low-rev refinement and outright punch, but there’s a cleanness and a hard-working honesty to its demeanour that makes it a fine base engine. Add a lighter nose and less overall weight (1775kg) and the base diesel’s benefits to the F-Pace’s agility are apparent, if not overwhelmingly so. 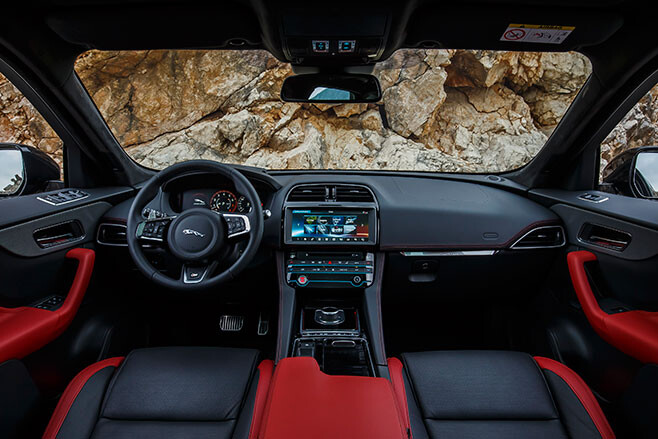 Ultimately, though, it’s the F-Pace’s cabin and packaging functionality that really need to shine – especially when the competition is as slick as the Macan and GLC. And while the F-Pace doesn’t quite match the Porsche’s feeling of expense, or the Benz’s superb vision and showroom razzle-dazzle, it’s a better effort than the XF and XE that preceded it.

Looking a little like a court-sanctioned security band, the black rubber bracelet is like a watch band without the face and can be worn while surfing, diving, swimming, you name it – meaning you don’t need to hide the car keys under a bush somewhere. Instead, you leave them in the centre console and simply ‘shazam’ your band against the letter ‘J’ on the tailgate badge, at which point the F-Pace’s lights flash and it unlocks. Genius!

The rest of its interior package passes muster pretty much without complaint. Shared front seats with XF are amply supportive, the seat trim at all levels is high quality and stylish, and F-Pace’s rear seat offers class-beating space … for two. The centre spot is okay in the cushion, but too firm and concave-like in the backrest.

The F-Pace’s saving grace, however, is class-best boot space. In a Jaguar! After generations of compact cargo holds, the F-Pace blitzes the field by 100 litres (at 650 litres) and can even squeeze a 19-inch space-saver beneath the floor. In this respect, the relatively rakish F-Pace proves that athletic looks and generous practicality aren’t mutually exclusive.

So it turns out Leaping Cat fans needn’t have worried about Jaguar’s foray into Toorak Tractor territory. The F-Pace is good – in some ways, bloody good – and is a genuinely convincing attempt at distilling Jaguar’s sporting values into a handsome SUV. It might lack the dynamic X-factor of the superb XE, but for what it is, the F-Pace is impressively well-rounded and flaw-free. With prices starting at just $74K, expect to see a shedload once it goes on sale here in July.