WHAT IS IT?
Jaguar’s second-generation XF medium sedan. It has a new lightweight chassis, new engines, and the potential to out-handle and out-ride the proven German luxury mid-sizers.

WHY WE’RE TESTING IT
To see if the Jaguar XF can live up to its on-paper promise. It’s lighter, by a whopping 190kg, smaller on the outside yet bigger on the inside, and uses the same aluminium-intensive architecture as the brilliant XE. But is it really a match for the Mercedes, BMW and Audi? THE WHEELS VERDICT
Jaguar set out to ruffle the feathers of its more popular German rivals with the new XF, and it's nailed it. Handsome, roomy and luxurious, the XF ticks all the big luxury sedan boxes, but its killer blows are its well-balanced chassis, overarching dynamic prowess and well-controlled ride. Who said you can't have your cake and eat it too?​

THE WHEELS REVIEW
JAGUAR isn’t holding back in its battle with the Germans for luxury sedan supremacy. The brilliant Jaguar XE has only just arrived, and now the British brand has launched a new version of its bigger brother, the XF, on Aussie soil. 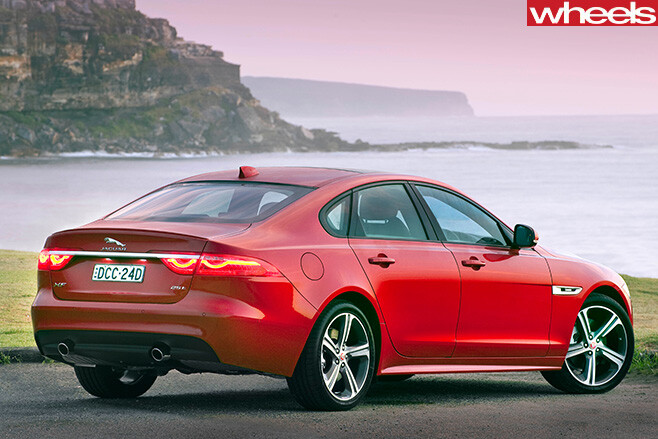 And on paper, the second-gen XF shares much of the XE’s promise. Shorter, lower and with a 51mm longer wheelbase than the car it replaces, the XF now rides on Jaguar’s new aluminium-intensive architecture. This means weight savings of up to 190kg and a 28 percent boost in structural rigidity. Jaguar’s chassis boffins have also worked hard to achieve near 50:50 weight distribution.

There’s new suspension too, nicked straight from the XE, which comprises double-wishbones up front and a sophisticated multilink link set-up (Jaguar calls it ‘Integral link’) at the rear.

And the results, when you throw the XF’s handsomely chiselled nose at a corner, are impressive. Far from being a wallowing luxo barge, the XF corners with an eagerness and composure that belies its size and (despite the weight loss) still hefty circa 1700kg kerb weight. 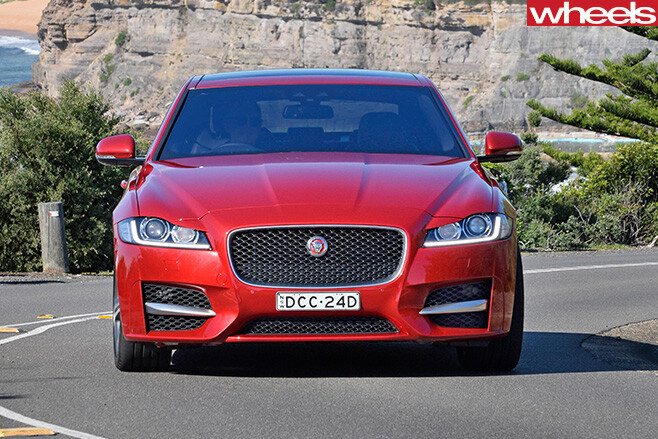 Don’t panic that this focus on dynamics has ruined the XF’s ride. Just like it achieved with the XE, Jaguar has found a deft balance between sporty handling and ride comfort. Passive dampers, that are frequency dependent for a cushier low-speed ride, come as standard, while top-spec V6-powered S models are fitted with the latest version of Jaguar’s adaptive damper set-up. R-Sport variants use a slightly firmer tune of the passive system.

Every XF can be optioned with adaptive dampers for $2400, though the passive set-up is convincing enough to save the cash.

Yet as good as the XF’s ride/handling compromise is, the dynamic highlight is the steering. It’s the same electric set-up as (you guessed it) the XE, only with added meatiness courtesy of a tweaked calibration. The result is one of the most communicative tillers currently on sale. The XE’s steering is sharp, smooth and provides a silky sense of connection. It’s good. Great even. 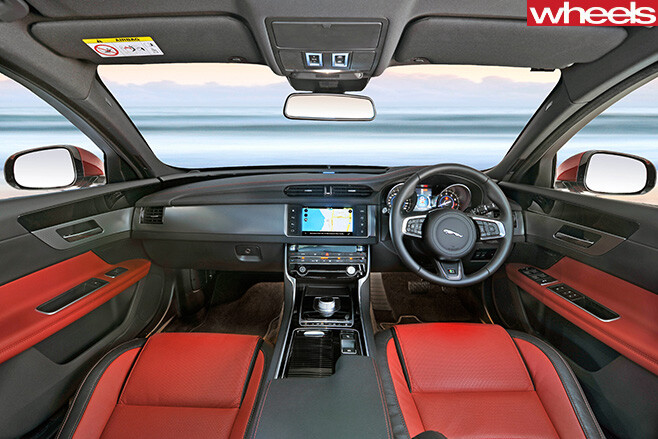 It’s a convincing suite of engines with no obvious weak spot, though the highlight is the sweet and refined 2.0-litre Ingenium diesel. Every XF is rear-wheel drive and paired with an intuitive eight-speed ZF gearbox. 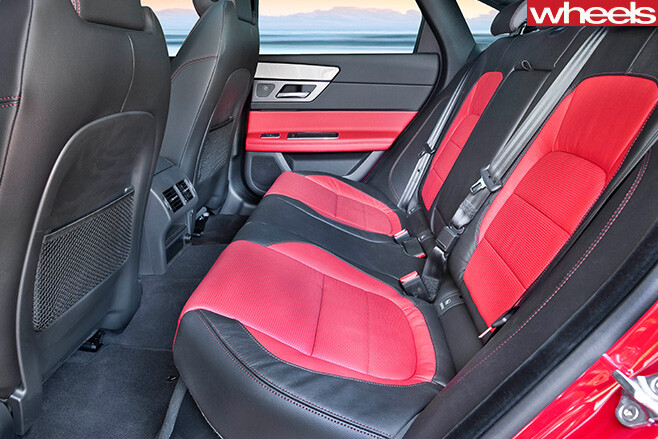 Jaguar has worked hard on the XF’s cabin, which is a much more convincing place to sit than the smaller XE’s thanks to a cleaner design and more logical layout. It’s roomy too, especially in the rear seat, with the XF’s lightweight undies allowing Jag’s boffins to provide 15mm more legroom and 27mm more headroom than before.

What’s lacking is the same level of tech wizardry and autonomous systems featured on the new Mercedes E-Class (due here in July), which can drive itself on roads without clear lane markings and can change lanes autonomously. Jaguar admits it’s a step behind its rivals here.

So just like its XE sibling, the XF’s strength lies in its engineering prowess, which begs the question: is its handling class-leading? Today, on these roads, it feels it, but that verdict will have to wait for a Wheels comparison test and thorough back-to-back testing. And as good as its new XF is, Jaguar knows the Germans aren’t mucking about either. Bring it on.