Lamborghini has cheapened its Huracan by chucking out the front prop shaft. It’s not necessarily a bad thing

The separation of turning and burning makes the less-powerful, more affordable Lamborghini Huracan LP580-2 an altogether more exciting and enjoyable performance coupe. And it loves to do power slides.

WHAT IS IT?
The Huracan LP580-2 is essentially the same as its Lamborghini LP610-4 all-wheel-drive brother, but has slightly less power and is rear-drive only. The goal, Lamborghini says, was to build a serious car for serious drivers.

WHY WE'RE TESTING IT
Can less actually be more? Has Lamborghini, by reducing the Huracan's complexity, actually delivered a more exciting and immersive driving experience? 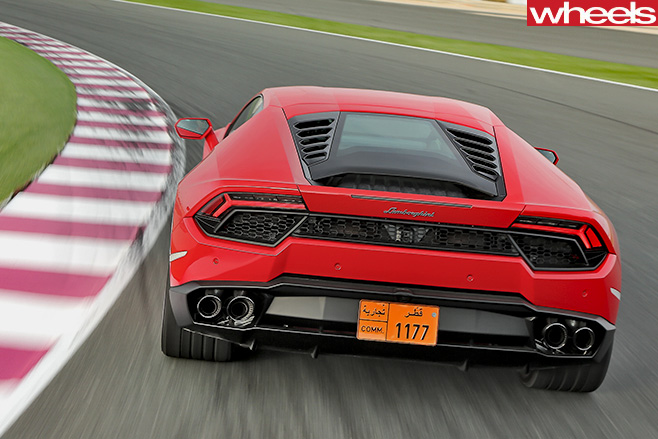 THE WHEELS VERDICT
If you care anything about driving, this is the Huracan to have. It may not be as fast on paper, but it's better in just about every other way.

PLUS: Better balanced; steering feel; everything about the V10; supercar looks inside and out
MINUS: Gear-change paddles are not wheel-mounted; I can't afford one 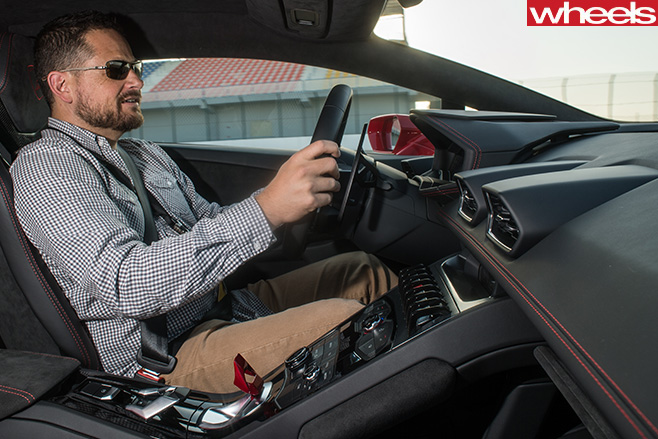 THE WHEELS REVIEW
THERE are four things you need to know about the Lamborghini Huracan LP580-2. First, it's 33kg lighter than the Huracan LP610-4 because it has no differentials or driveshafts channelling power to the front wheels. Second, its 5.2-litre V10 is 23kW and 10Nm less potent, mainly to create a model range heirarchy, yet gives the rear-driver an almost identical power-to-weight ratio to its all-wheel-drive sibling. Third, it'll be $50,000 cheaper than the Huracan LP610-4 when it arrives in Australia in April 2016. And fourth, it's engineered for oversteer.

Power oversteer, you may be surprised to learn, was one of Lamborghini's five main aims when developing this “entry-level” Huracan. The other four are admirable, too, but hard to remember when you're oppy-locking 426kW of mid-mounted V10 through a corner, and juggling gears via paddles that don't rotate with the steering wheel. 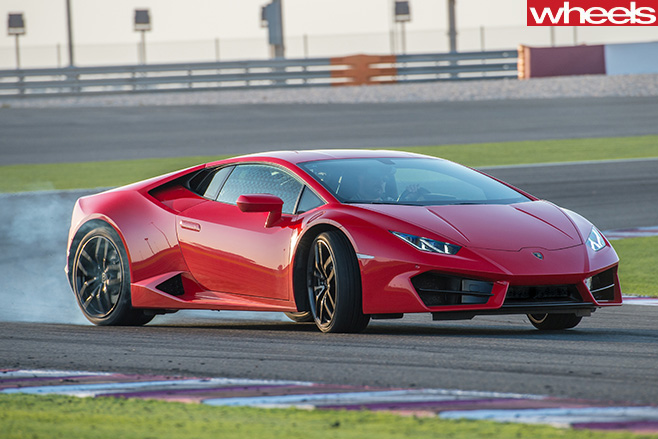 So important was this rear-steer emphasis that Lamborghini worked with Pirelli to dumb down the Huracan's P-Zeroes (19s are standard, all test cars had optional 20s), making them harder and less grippy. Both of those are relative terms; we're still talking about tyres fit for a supercar. And Lamborghini doesn't call it dumbing down, they call it enhancing the car's propensity for oversteer and its progressiveness beyond the limit.

Despite this fixation on becoming a drifting demi-god, the Huracan LP580-2 is not a one-trick stallion. It possesses more adjustability and tactility than its sibling. Go too hard into a corner, and the front will scrub wide, just like the all-wheel drive would. But that's where similarities end, because the driver can turn understeer into oversteer with smooth and judicious use of the throttle. Where the all-wheel drive version would respond by forcing the nose even wider, the rear-driver turns plow into wow when rear end slip allows the fronts to reacquire the adhesive upper hand. 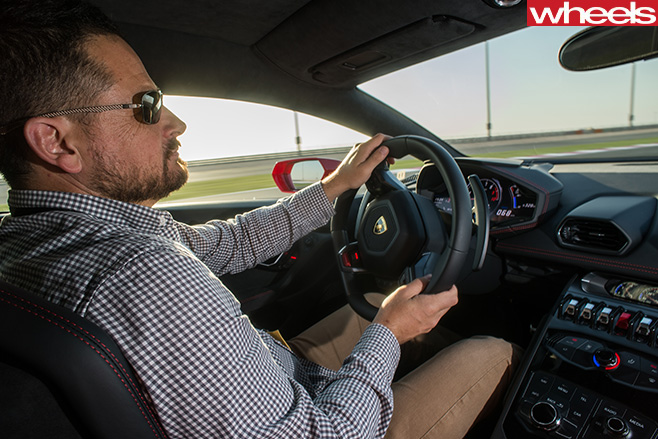 Of course, you could just get things right in the first place, and make full and furious use of a Huracan that now possesses the cornering neutrality to make Switzerland seem belligerent. And, even though it's 23kW down on power, it doesn't feel any less explosive out of corners. Sure, it probably is slower around a racetrack, and definitely is slower to 100km/h (3.4sec v 3.2). Look at it this way: now you get more time every lap to revel in the Huracan's heightened senses. And to rev that barkingly brutal V10 out beyond 8500rpm… 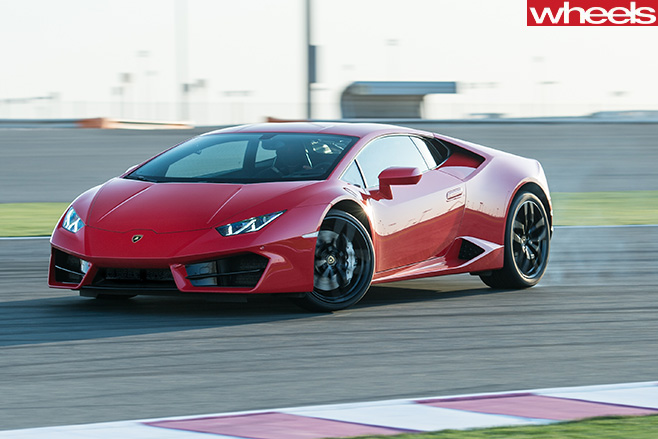 Equally, the Huracan's balance during hard braking is nothing short of brilliant. It has a level of adjustability that makes trail braking to the apex not only possible, but exploitable and great for setting up a quick getaway. And, as for the chest-crushing braking power of those big-dish steel stoppers front and rear… No idea. All the cars available for testing at Losail had relentless carbon ceramic brakes, which will not be standard on Australian spec models arriving from April. Those carbon ceramics, which are standard on the LP610-4, account for $22K of the $50K price difference. 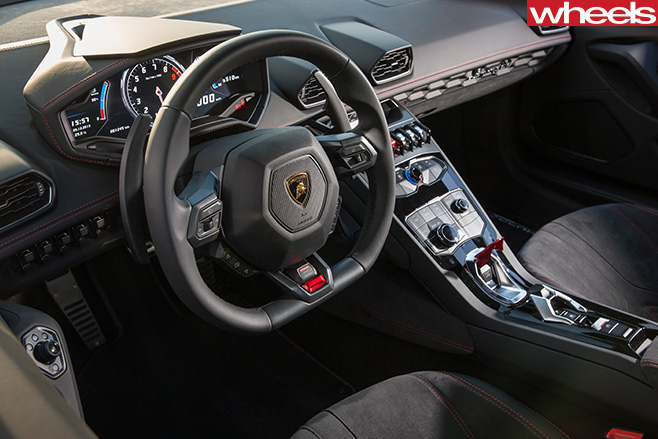 Lamborghini's decision to 'adjust' the characteristics of the Pirelli P Zeroes for the rear-drive Huracan was not just about inducing tail-wagging shenanigans, but also to make the Huracan feel more progressive and controllable beyond the limits of adhesion. They have achieved that, but this is still a powerful mid-engine coupe, and physics cannot be ignored. When you've got 60 percent of the car's weight behind the centre point (compared with the all-wheel-drive Huracan's 42/58 spread), this new 'progressiveness' is best enjoyed with the ESC reduced but still on call. Shaking the rear loose early in the corner during a drifting photo session often led to me facing the way I came. Powering hard from the apex, however, produced some very enjoyable, and progressive, powerslides. 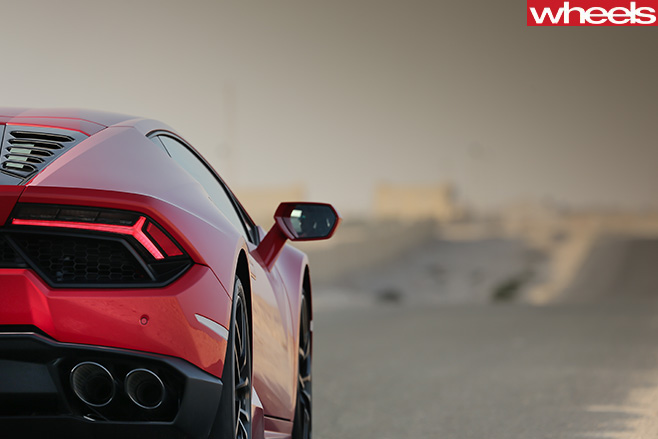 The ESC deserves much credit for bringing the rear-drive Huracan's magic within reach of driving mortals. The 'Anima' drive mode system (Italian for soul) cycles between Strada, Sport and Corsa via a button on the steering wheel. Strangely, it's the middle mode that encourages and finesses the most creative rear-steering, while remaining ready to step in and sort things out if the driver can't. Corsa mode, which also sharpens gearchanges and makes the throttle hyper-sensitive, has an ESC tune designed to minimise lap times, which means keeping things as straight and tidy as possible, and maximising drive. All of which it does very well, but is nowhere near as satisfying as Sport's ability to make you think you're a driving god holding an insane fourth-gear drift through Losail's fast right-hander. 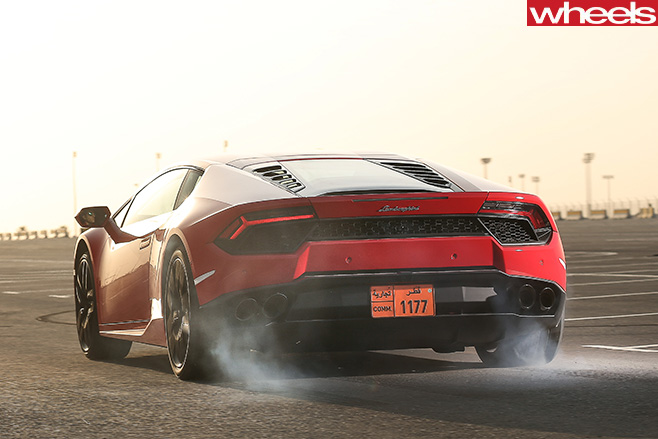 This car is astonishing on many levels, and proof that Lamborghini can do more with less. The Huracan LP580-2 is not a just a drift machine, it has all the tricks, and is sharper and more adjustable than the all-wheel-drive Huracan. The separation of turning and burning has elevated what was already a wonderful dynamic package to new highs of driver immersion.