Even on a tight rein, it’s always Sport over Comfort in our Mercedes-AMG C63 long-termer.

First published in the July 2016 issue of Wheels magazine, Australia’s most experienced and most trusted car magazine since 1953.

AFTER last month’s thrash-and-dash extravaganza, all to the tune of the C63 S’s bent-eight rumble, it was back to humdrum urban duties for the AMG’s penultimate month on fleet.

A Mother’s Day blast up the M1 reminded me just how luscious the C63 can be when chewing up distance, but it’s a different beast when traversing the obstacle course of shopping-centre car parks.

Experience has shown that relying on the drivetrain’s Comfort mode, and thereby cancelling out first gear, is anything but comfortable for the C63. As the transmission slips and slurs trying to channel enough torque to the rear wheels, the Mercedes-AMG C63 simply hangs about, wondering what’s going on. It’s especially hard-going in Sydney’s tight inner-city parking stations, where steep ascents and brutal speed humps leave the C63 struggling to transfer all its rev flaring into smooth forward momentum.

The solution, as I’ve mentioned before, is Sport mode. And having relied solely on this set-up for months now, I reckon it’s both more economical and a more relaxing experience than the ironically named Comfort.

Direct drive to first gear means the C63 steps off the line beautifully, supported by surprisingly progressive throttle response that ensures the rear boots don’t instantly turn into whirly-birds in the wet.

C63 has three clocks – two digital and one gorgeous IWC analogue – all showing the same time, as you’d hope.

And the Speedshift-MCT transmission doesn’t needlessly hold onto gears like so many two-pedal cars when switched to Sport. Instead, progression up its seven-ratio set mirrors how you might upshift in a manual, all to the tune of an angry nudge from the exhaust as it upshifts under load.

The Sport-primed transmission also eviscerates the top gear-obsessed Comfort setting by proving that you can have your cake and eat it too. Sport has no qualms settling into sixth or seventh, yet as soon as you call for instant forward thrust, AMG’s gearbox is immediately on the case, briskly shifting down with dual-clutch-rivalling haste.

If you buy a car like the C63 S and only ever drive it in the city, you’re missing out on soooo much of this car’s richness.

Leaving the parents’ joint, there’s a right turn at a tight roundabout, followed by an uphill on-ramp leading straight into a 100km/h zone. It’s like dropping a green flag in front of the C63. With ESP Sport engaged, I flattened the aluminium throttle pedal and the C63 simultaneously grabbed the lowest gear possible and the hotmix surface below, shoving both occupants in the back as it turned that incline into something more like a downhill ski run.

Then there’s the addictive sideways nudge from the tail as it barks into third, a not-so-subtle reminder that 375kW and 700Nm are doing the talking.

Even knowing what’s up its sleeve, the C63 S never fails to surprise and satisfy. 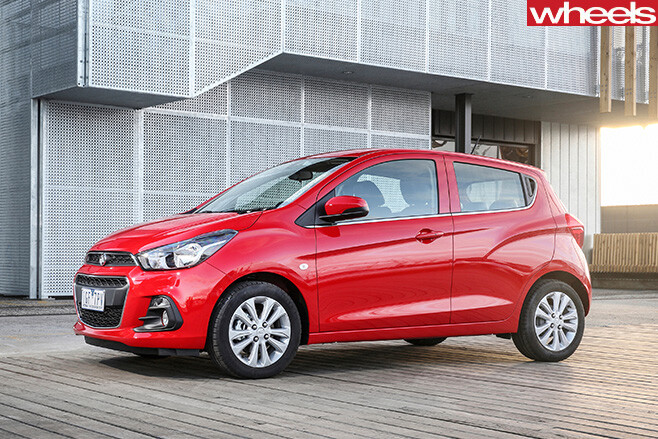 The seed was planted during COTY testing last November. The order of events saw hot laps around Lang Lang in the brutal Mercedes-AMG GT coupe, followed by Suzuki’s dorky Celerio ... yet somehow the little Suzi wasn’t disgraced. So what better car to replace the C63 S, I thought, than its polar opposite, a micro hatch. The Celerio has already seen (sterling) service on these pages so the call is out to Holden for a Spark. In the meantime, however, I’ll be gorging on the AMG’s V8 before the romance is over.