Toby Hagon takes one of the fastest racers in the world – the Mercedes-Benz AMG GT3 for a lap or two around Eastern Creek.

THE ROAR of an atmo V8 is borderline vulgar, especially when it’s belching out of two side exit exhausts just inches from my derriere, itself seemingly millimetres from the smooth Sydney Motorsport Park circuit.

Welcome to life in Mercedes-Benz’s race-ready bruiser, the AMG GT3, one of the most spectacular-looking machines taking part in the GT3 race series that is creating some serious excitement at Mount Panorama for 12 hours each February.

This is no normal Merc. You get that as soon as that engine barks to life. Refinement, too, is nowhere near the levels the luxury brigade would expect from the three-pointed star. 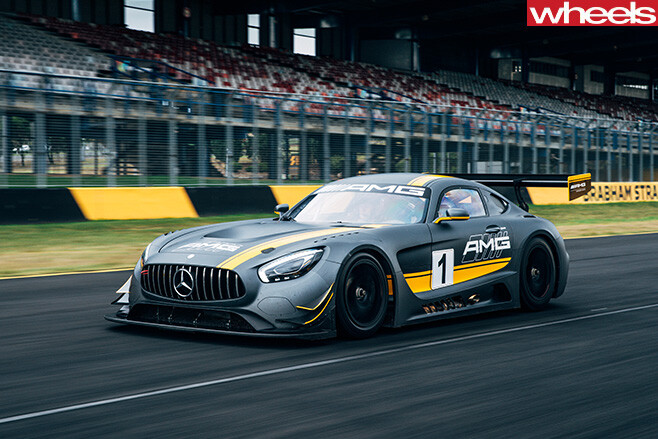 It’s about getting you there quickly; “there” being back around to the start/finish line.

That’s rammed home just trying to get into the thing. Slotting my generous frame into Mercedes-Benz’s purpose built racer is like a mix of yoga and Twister dots. The seat, with its extensive head-protectors blocking half the door way, is fixed, carefully positioned around the roll cage and directly below the rescue hatch that pops out of the roof in the event you go belly up.

That’s one thing I'm hoping not to add to my experiences today. This race-ready version of the GT S is one of the rarest cars in the world; while orders are slowly being filled, for now there are just 16 of them, four in Australia. 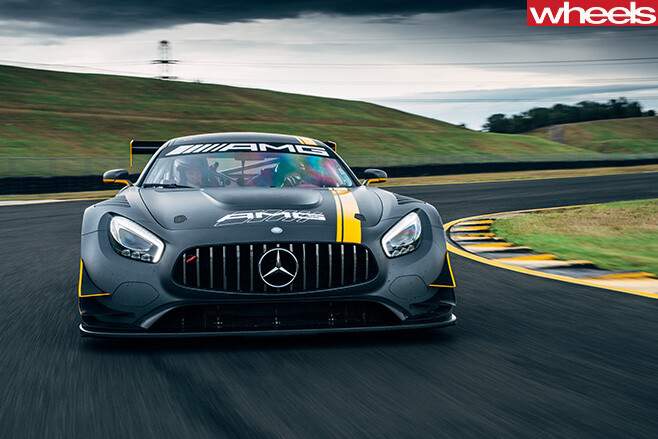 Once snuggled into the bucket seat, though, it’s surprisingly spacious, at least with the padding removed. Adjustable pedals account for different heights and the low slung seat means there’s plenty of space between me and the aluminium roof for a helmet. The Batman-like steering rectangle (it’s not a wheel) is perfectly positioned.

Press the unassuming start/stop button on said steering implement – one of many buttons within its diminutive dimensions - and conversation stops when the V8 fires to life. It’s a serious bellow.

The GT3 doesn’t get the new twin-turbo V8 engine that is part of all road-going GTs, instead making do with the old school 6.2 atmo V8. 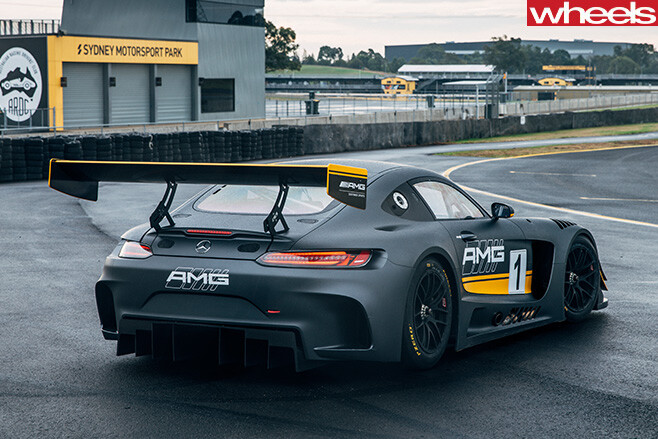 Engaging the button clutch requires some aggro, prompting a less than gracious take-off, complete with some bunny hopping as the car seemingly protests about being driven so sedately. It’s as if it’s tempting you, daring you to up the ante.

Disengage the 40km/h pitlane limiter and it’s all road noise, gearbox whine and the ping of every rock or marble firing off the wheel arches. Insulation only slows you down, so it’s left on the sidelines.

Prior to taking the hot seat, chief instructor Peter Hackett hits us with some key stats: In qualifying trim – fresh tyres and with everything dialed up – it’ll be flat through Eastern Creek’s turn one, the speedo tickling 245km/h. Having held on to fast road cars at 180km/h through the same bend that’s one heck of a speed. Depending on the “balance of performance” settings that are part of the GT3’s handicap formula, the latest race version of Benz’s GT coupe is capable of a sub-two-minute time around Bathurst’s Mount Panorama; at least five seconds quicker than a V8 Supercar, then.

Oh, and the latest race-ready version of a road car – produced to adhere to the global GT3 regulations – has been designed for amateurs.

Yet from my early sighting lap it’s clear this is a car that doesn’t want to be driven gently.

The engine gives you that. It sounds good at 3000rpm, but positively glorious beyond 7000rpm. Acceleration is potent, especially jumping out of Eastern Creek’s slow hairpin. It’s helped by the sticky 18-inch Pirelli slicks. 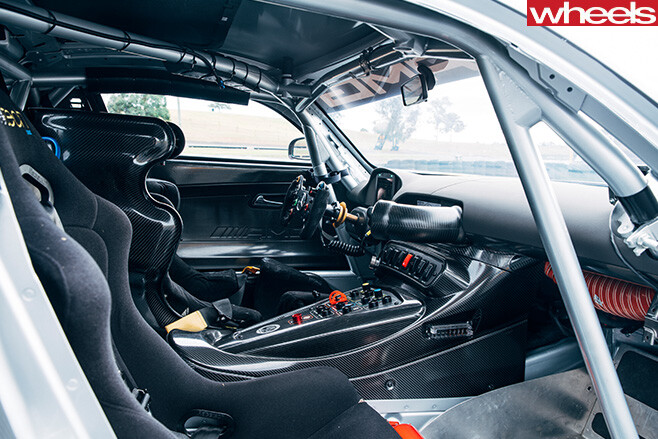 But it’s not about to inflict a road-going AMG with a bloody nose: both are quick.

The seven-speed sequential gearbox does dish out some accelerative pain, though. Super-fast, sharp changes ensure every millisecond is used dutifully. The button clutch has no give, sending a forward-thrusting jolt through the car like a sledgehammer has been wielded into the tail.

But it’s corners that quickly show the GT3’s ability – and prove why it’s quicker than so many other racers. The already direct front-end of the AMG GT S has newfound bite in the race version. Steering is super direct and, again, those slicks show little sign of letting up. Push on and you’ll get a sniff of understeer, but the limits are super high. 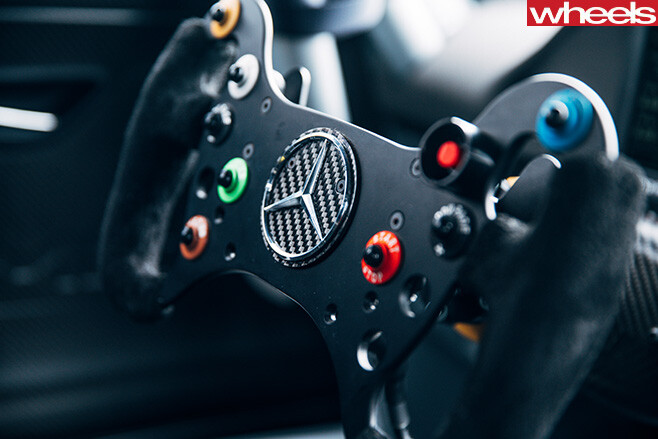 Aerodynamics, too, play a big role in ensuring corners can be rounded at speeds road cars won’t get close to. They can press down with hundreds of kilos of downforce, something Hackett demonstrates by jumping on the intricate carbon fibre splitter protruding from the already-lengthy snout.

Not that I’m anywhere near testing the limits through the fast turn one. I roll out of the accelerator at 200-and-something half way down the straight. The most obvious sensation through the first left-hand sweeper is how easy it is to re-adjust; minute steering inputs confidently position the car precisely where you direct it, further confirmation that there’s plenty left in this near-million-dollar machine.

It's over all too quickly, although the car could clearly cop plenty more.