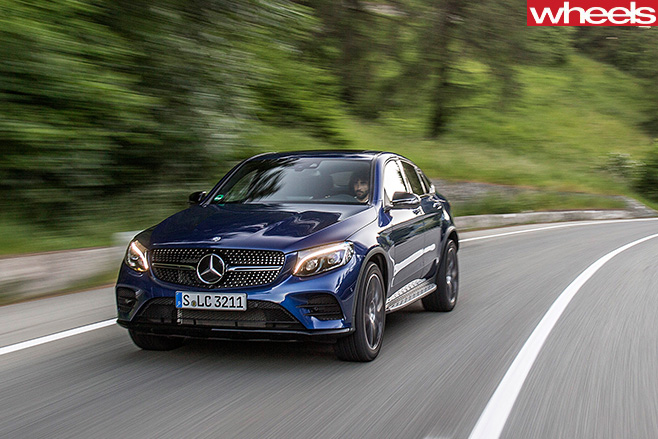 THE WHEELS REVIEW
Oh, how we laughed and teased when, not so many years ago, BMW launched the X6, a Frankenwagon “crossover” of sports sedan, fastback coupe and off-road SUV. “Who the hell would buy such a thing?” we wondered aloud, while our mate who’d become a new dad sold his Boxster and bought one, a serial E-class owner bought one, a tree-changing retired couple bought one... 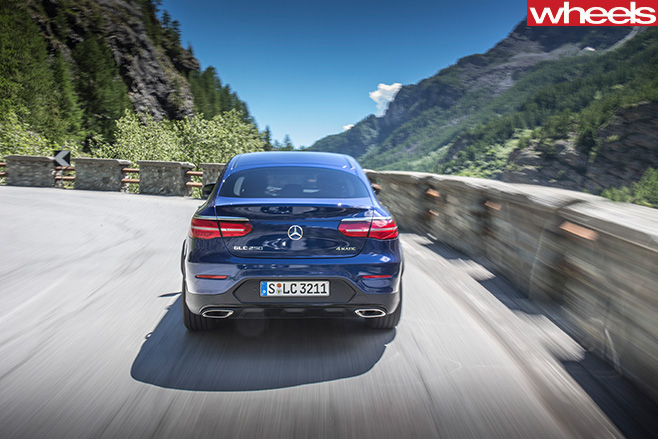 Today, the only crossover that makes the news is Caitlyn Jenner. Mercedes-Benz, which came late to the SUV-coupe bandwagon with the GLE (previously ML) Coupe, is adding a similarly slopey-styled coupe to the smaller, sister GLC SUV. “It’s a niche within a niche,” admitted one Benz bod.

First up, regardless of engine, all Oz-bound GLC Coupes will feature 4MATIC all wheel drive, 9G-Tronic auto, Dynamic Body Control suspension, 20-inch wheels, AMG Line exterior and interior styling, “diamond” grille and 360-degree camera, all in an effort to distinguish the Coupe as the more sporting alternative. The 220d, uniquely, gets Artico fake leather; 250s and up get the real thing. 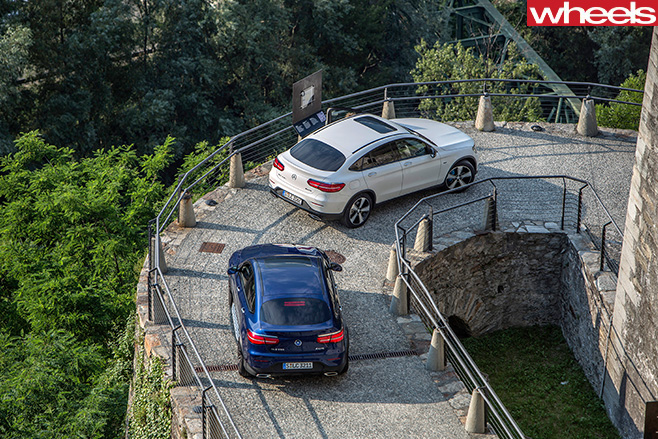 The announced GLC Coupe launch prices represent a sizeable step of around $12,000 over their respective GLC SUV sisters. However, the coupes do bring substance along with the style, having sports suspension, quicker steering, five-mode Dynamic Select steel suspension (and optional Air Body Control suspension) and a specific coupe interior, along with the AMG tweaks and 20-inch wheels mentioned earlier. 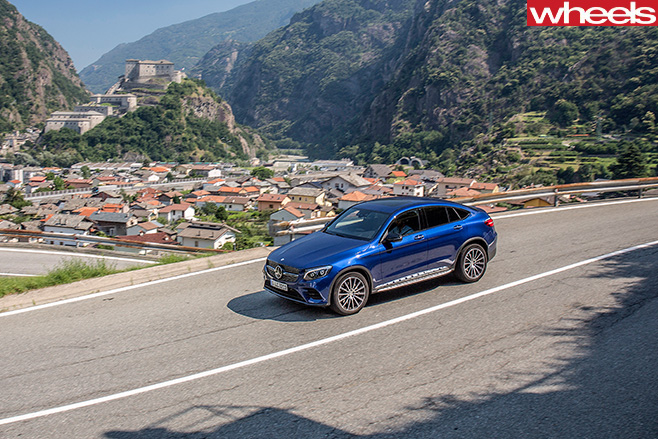 The Coupe certainly looks different enough, being 76mm longer and 37mm lower, though on the same 2873mm wheelbase as the GLC SUV.

That translates to a comfortable and coupe-cosseting cockpit up front, with deeply sculpted seats that are almost as supportive as they look. The rear bench visually suggests a sculpted two-seater style and offers plenty of knee and foot room; passengers shorter than 178cm won’t have issues once seated, but they’ll likely bang their heads while getting in and out. That sloping roof, high tailgate and thick pillars all conspire to rob visibility.

The 2.0-litre petrol four makes the near-1.8 tonne 250 Coupe feel surprisingly agile, helped in no small way by the nine-speed auto that masks the engine’s quickly tapering top end. Another pleasant surprise is the steering, which is beautifully pointy and is complemented by palpably good Michelin Latitude Sport 3 255/45 ZR20 rubber and a standard suspension whose Dynamic Select brain-box extends all the way to Sport and Sport+ settings. 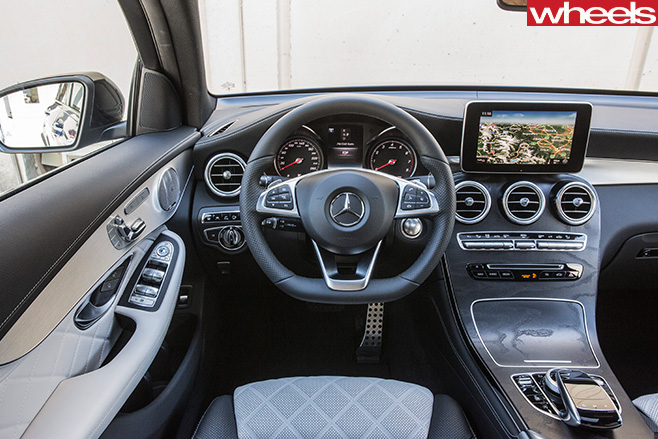 In our favoured Sport setting, the GLC 250 Coupe cornered firm and flat, yet still rode with more than adequate comfort (the other three settings are Eco, Comfort and Individual). While the suspension’s firmness and the throttle responsiveness changes noticeably across the range of settings (and the optional Air suspension lowers ride height in Sport and Sport+), I couldn’t pick much difference in steering feel. It was perky and pointy all over.

All of which suggests that those who opt for the GLC Coupe over the stock SUV sister can justifiably do so on the basis of a better, more rewarding drive. The concession to style, as described by that sloping roof, perhaps isn’t so punishing; the boot appears quite deep and long, entirely accommodating of typical medium-sized sedan demands – if not, perhaps, the antique coffee tables and inner-city accoutrements of the who-the-hell-buys-these-cars that buy these cars.