Mercedes-Benz fills a glaring hole in its line-up with this classy, high-quality C-Class-based SUV called GLC.

WHAT IS IT?
A much-needed SUV based on W205 C-Class architecture, slotting in between the small GLA and relatively large, re-branded ML (now badged GLE). Considering SUV sales continue to boom in Australia, in unison with record numbers of C-Class models fleeing showrooms, the GLC’s timing is near perfection. WHY WE’RE TESTING IT
The premium mid-size SUV category continues to grow, and the Mercedes-Benz GLC is destined to increase that trend. But it occupies an enviable position. With a premium feel to match the $20K-plus dearer Porsche Macan, the GLC instantly dates BMW’s dour X3 and Volvo’s ancient XC60, as well as Audi’s biggest seller, the seven-year-old Q5. Even Land Rover’s relatively fresh Discovery Sport won’t know which way to turn. 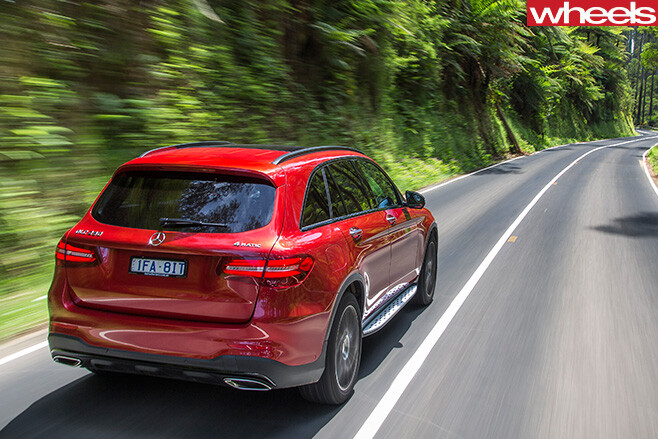 THE WHEELS VERDICT
Given that the 220d, 250 and 250d 4matics are just the beginning, there are big things to come for the GLC. Buyers will be won over by its svelte lines and opulent cabin, not to mention its persuasive refinement and generally impressive ride. But press-on drivers need to select the Air Body Control option, while those who place a priority on luggage space would be better off in a C-Class Estate. Petrolheads should hold out for the twin-turbo V6 (GLC450 AMG) and twin-turbo V8 (GLC63 S) variants due to arrive in 2016. THE WHEELS REVIEW
THE boffins in Stuttgart definitely underestimated the worth of a decent SUV spin-off first time out. Four years behind BMW’s inaugural X3 and hobbled with left-hand-drive only, the 2008-15 Mercedes-Benz GLK is now widely recognised as “a mistake” by the company’s top brass, given its restricted market potential in a booming category. But that’s all about to change.

Sharing its platform and drivetrains with the lauded W205 C-Class, the GLK’s all-new GLC replacement is Stuttgart’s apology to the world. And, in particular, right-hand-drive markets such as Australia. Yet the GLC is hardly down on all fours begging forgiveness. It’s simply too good for that. 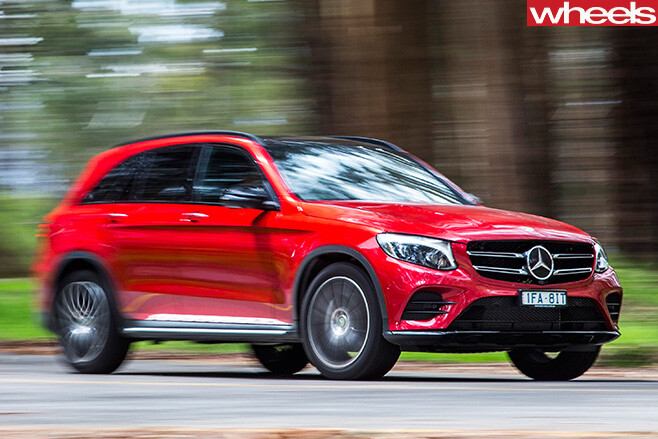 Beneath its tastefully sculpted sheetmetal – some of which is aluminium (front guards, bonnet and roof) – the GLC offers several advances over the C-Class it’s derived from. Its slightly longer wheelbase liberates 30mm of rear legroom, while its increase in height achieves additional headroom (another 30mm). In conjunction with a rear-seat cushion mounted 30mm higher from the floor, the GLC is actually 60mm better off for rear-seat passengers, as well as 20mm wider for crucial extra kiddy-seat room. About the only area where it concedes anything to the C-Class Estate is in the boot. While the GLC’s 550-1600 litres sits right at the top of its posh SUV class, in reality a C-Class Estate is arguably more practical for anyone frequently lugging stuff.

The GLC’s passenger-car stablemates are also sweeter to drive, though this SUV is respectably accomplished. While the GLCs we drove at the international launch in July were all fitted with optional ‘Air Body Control’ suspension – featuring multi-chamber air springs, adaptive dampers, self-levelling and height adjustment – the local launch cars were steel-sprung with fixed-rate dampers. Apparently, the adaptive dampers we were told would be part of the steel-sprung set-up is false. On the multi-faceted roads of Victoria’s Yarra Ranges, the GLC impressed with its quietness and generally plush and absorbent ride, even on the 255/45R20s worn by both 250 variants. However, the standard suspension kisses its bump stops on big hits, and there’s a lack of damping resistance as the pace gets serious. Selecting Sport mode removes any inconsistency to the steering’s weighting, making the stock GLC point with greater cohesion, but anyone who truly values dynamics should head straight for Air Body Control ($2490 extra). Or at least the AMG Line package ($2990) that brings sports suspension (but not ABC), as well as multi-spoke 20s, a subtle bodykit, privacy glass, sports pedals and a flat-bottomed steering wheel. Thankfully, the annoying and ugly side steps fitted standard to Aussie GLCs are a delete option.

While performance enthusiasts should wait for the 270kW 3.0-litre twin-turbo V6 (in the GLC450 AMG) to arrive in mid-2016, the 220d, 250 and 250d variants all perform well. The base 125kW/400Nm diesel is a fairly sweet thing, if lacking the sportier zest of the 155kW/350Nm 2.0-litre turbo-petrol, while the 150kW/500Nm 250d feels smoother and more polished than the example we drove several months ago. Benz’s 9G-tronic nine-speed automatic also performed faultlessly, with more than enough ratios for the 250d’s torque. But it’s the GLC’s premium interior, and its superb widescreen forward view, that is guaranteed to make this SUV the one to have for summer 2015-16. About the only thing the base $64,500 220d is lacking is genuine leather, though the seats themselves are among the best there is in GLC’s competitor set. And if you have a play with Mercedes-Benz’s tempting options packages (such as the Comand pack with premium multimedia and centre screen, plus internet and a fabulous 13-speaker Burmester stereo for $2990), then the GLC stretches even further into super-luxe territory.

Talk about all good things to those who wait.