WHAT IS IT?
Much prettier, that’s what. Mercedes has given its iconic SL two-seater a nose job for this mid-life update and it’s the better for it. There are tweaked engines too, and a new gearbox and suspension tune, plus a new price tag which is up to 10 percent cheaper.  So you’re literally getting more for less. WHY WE’RE TESTING IT
To see if this latest version is a worthy continuation of the SL line, which now extends over sixty years. Its chassis might be largely unchanged, but Benz has adjusted the electronics that control the variable damping and added its Active Body Control system, which could change the SL’s personality. THE WHEELS VERDICT
As facelifts go, this one scores a big thumbs-up. The new Mercedes-Benz SL is faster, prettier and packed with new tech. There’s also a marginally stronger focus on dynamics, ensuring the SL retains its crown as one of the best all-round performance cruisers on sale. 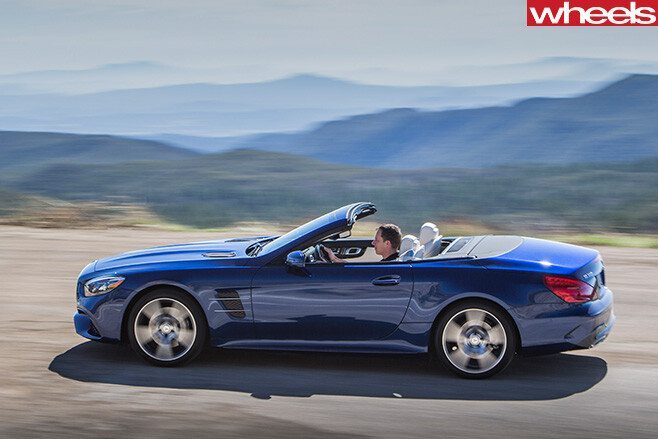 THE WHEELS REVIEW
RARELY has a car suited its location so perfectly. I’m standing atop a sunny Californian mountain, peering into the valley below while the 4.7-litre V8 of an SL500 ticks loudly as it cools behind me. Below are glimpses of a hairpin-turn infested road, and the air is pierced by howling SL engines as other journos charge up the mountain.

It takes a single glance to know the SL’s mid-life facelift has succeeded. The old car’s styling divided opinion, especially around its nose, but this new nip’n’tuck is much more pleasing. The new, all-LED lights are thinner, the snout is more cohesive and a redesigned bonnet is now strafed by a pair of bulges similar to those of the iconic 1955 300SL Gullwing. It’s all rather handsome. 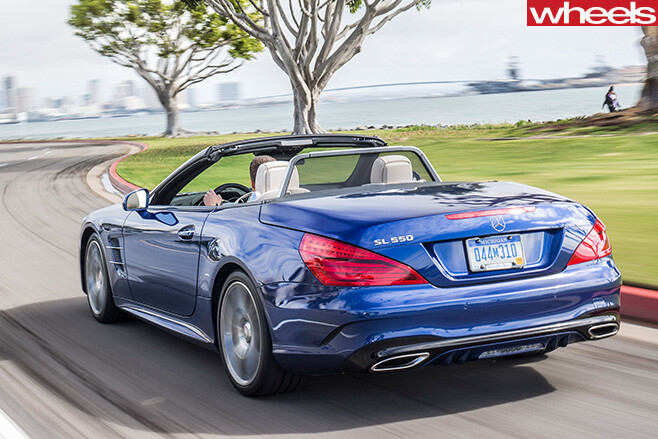 Aussie cars also get AMG body styling as standard, and new wheels and interior trims, plus Merc has boosted the interior tech with the latest version of its Comand Online system and integration with Apple Carplay.

There are mechanical tweaks too. Non-AMG models now use a 9-speed automatic gearbox, and Merc’s Active Body Control suspension system, which replaces conventional sway bars with computer-controlled dampers, is now available as an option.  As is the Curve tilting function as fitted to the S-Class Coupe, which leans the car into corners like a motorbike to offset body roll. There’s also, as you’d expect, more power. While the two twin-turbo V8s in the SL500 and AMG 63 remain unchanged, Benz has wicked up the newer 3.0-litre twin-turbo V6 in the entry-level SL400. It now produces a healthy 270kW/500Nm thanks to extra boost and an ECU tune, and it’s an absolute peach of an engine. Sharp and responsive, it’s also satisfyingly quick and pushes the 400 from rest to 100km/h in 4.9sec.

The new 9-speed ’box is smooth and intuitive, though obviously calibrated more towards cruising than performance. Even with Sport+ selected on the now standard Dynamic Select dial, the torque converter auto rolls into the next gear instead of slamming shifts home with conviction. 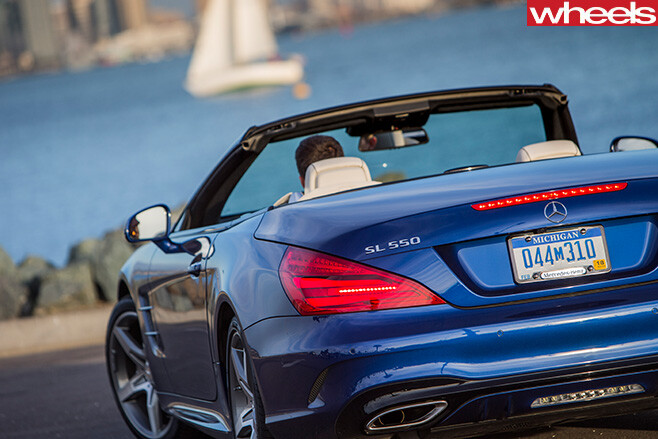 Stepping into the more popular 335kW/700Nm V8-powered SL500, which Benz says will make up more than half of all SL sales, brings a welcome boost in grunt. (That’s the car pictured here, with a US-market SL550 badge.) But performance junkies will be most interested in the new AMG 63.

It scores the trick ABC suspension system as standard, and the result is a car that instantly feels more focused. Its 430kW/900Nm 5.5-litre V8 is more explosive, its front axle keener to turn inn, and there’s an enormous amount of rear grip thanks to sticky 285/30R20 rear Michelin Super Sports.

Yet there’s still no escaping the SL’s colossal size. Peering down its enormous bonnet gives the impression that two thirds of the car is in front of you, and while the steering is fluid, it lacks any real feeling of connection to the road and front wheels. This can make it difficult to judge the SL’s trajectory and steering inputs when you really begin to push. 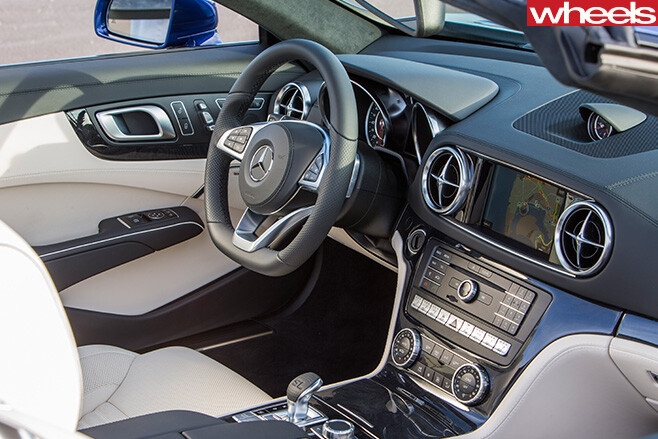 So a razor sharp sportscar the SL is not, but it remains an effortless performance cruiser and a rather great GT car. The ride on large diameter wheels and low profile rubber is deftly damped, the cabin is richly trimmed and comfortable and it’s also astonishingly stiff. Roof up or roof down, all three SL variants are impressively free of flex and scuttle shake. Inside there’s a new steering wheel and instrument cluster, but the biggest interior gripe goes to the small infotainment screen and button-heavy central stack, which are beginning to feel a little last-gen.

Better news is the SL’s price. Despite its extra equipment, Benz has slashed between five and 10 percent from the SL’s sticker, which mightn’t sound like much but can translate to a saving of up to $40,000. It means you can now score one of the best fast all-rounders on sale, for less.