Look out Golf GTI: Peugeot’s coming. The former hot-hatch specialist has hit back and hard with the 308 GTi, and it works on local roads

After 15 years without a Golf GTI rival, long-time hot-hatch specialist Peugeot has hit back and hard with the 308 GTi. Should VW be worried?

WHAT IS IT?
Peugeot has strutted straight into Golf GTI territory with the 308 GTi, which brings two performance tunes, impressive efficiency, seriously uprated suspension, stronger brakes, and subtle yet menacing visual upgrades designed to shake up an extremely competitive class. The French brand once dominated the hot-hatch genre, so drivers ought to take notice. 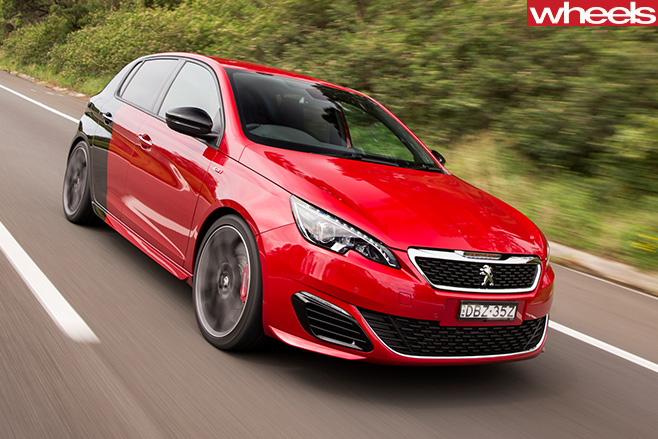 WHY WE'RE TESTING IT
Peugeot has been out of the C-segment hot-hatch loop for far too long. The introduction of two 308 GTi variants – base 250 from $44,990 and honed 270 for $5K more – puts the Sochaux brand smack into Golf GTI and Megane RS 265 territory. With fond memories of scorching 306 GTi-6s carving up corners with racy grace, we’ve been waiting for far-too long for this to happen. 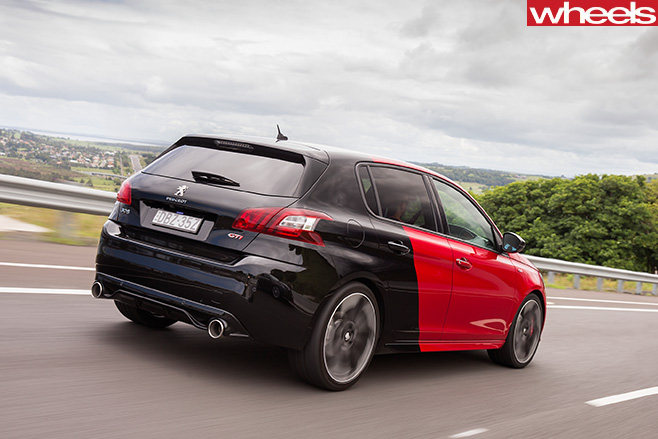 THE WHEELS VERDICT
LIKE a washed-up star making a comeback, the return of the Golf-sized Peugeot hot hatch has attracted more than its fair share of cynics, especially as the 308 GTi’s price and on-paper spec seem a little way off the class leaders. But the French Lion has historic form in this sphere, and while only a comparison would reveal whether the GTi rules its domain, the fact a comparison would be needed reveals how tantalisingly close Peugeot is in shaking the segment status quo to its core. For performance, pace, handling, poise, roadholding, ride, and refinement, the flagship 308 – especially in top 270 guise – is deeply impressive. 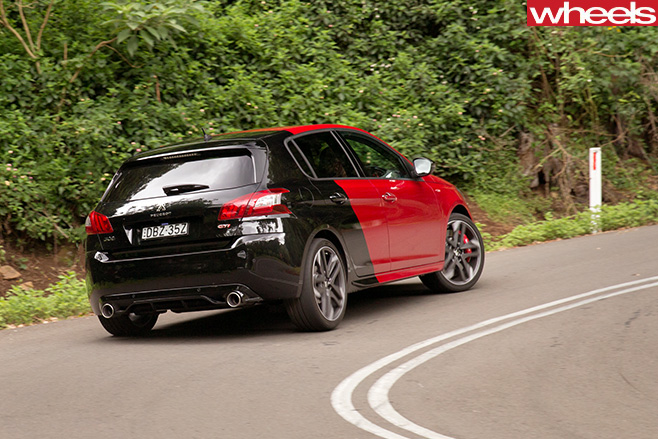 THE WHEELS REVIEW
WHEN the sun set on the thrilling 306 GTi-6 in 2001, so faded some of Peugeot’s soul. Without a Golf GTI rival, the lost decade that followed was a free kick for rivals and a kick between the legs for enthusiasts.

So any scepticism towards the 308 GTi is understandable, especially as it is down on capacity (1.6 versus 2.0 litres), up on price (10 percent over the Volkswagen equivalent), and lacking an auto option.

But upsetting the establishment defines the best hot-hatches, and herein lies the (other) Lion brand’s greatest opportunity to roar once more. 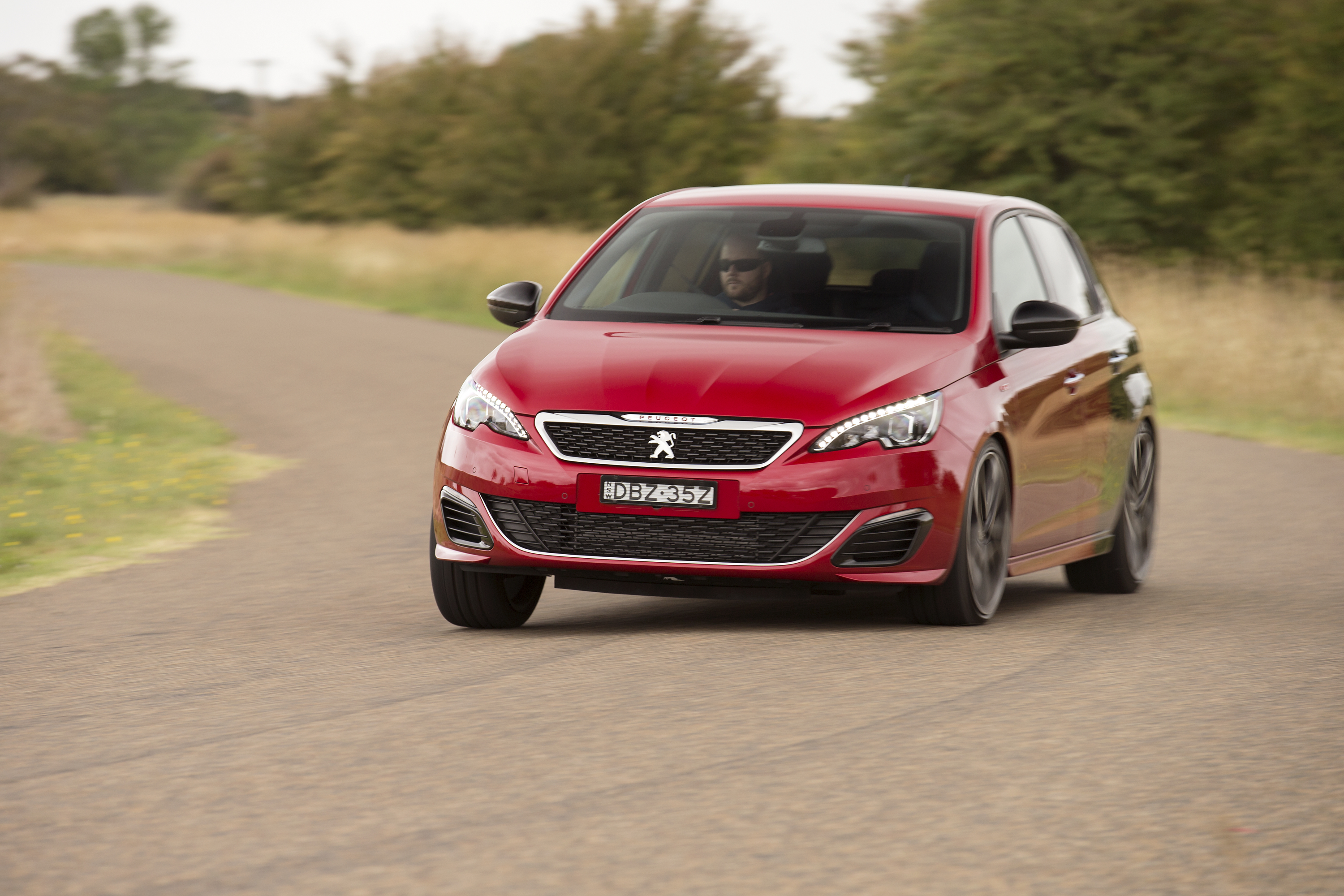 The upshot in the $44,990 250 is rapid off-the-line acceleration, which builds hastily as the revs soars towards the 7000rpm cut-out. Furthermore, selecting Sport mode is like choosing the red pill, with the Peugeot’s performance – complete with amplified exhaust – stepping up a notch. 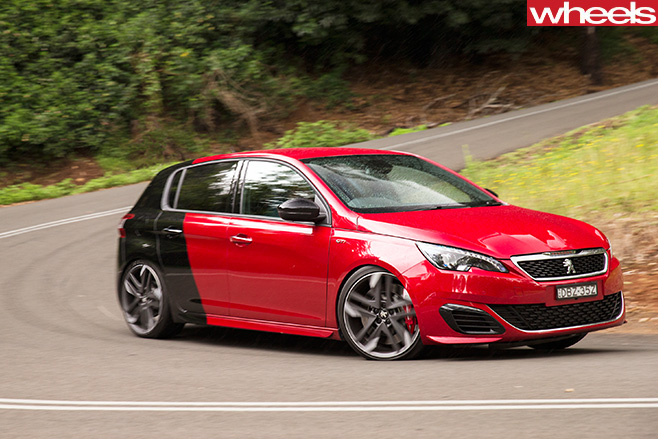 Predictably, the $5K-extra 270 adds noticeably more muscle, especially up top, while Sport magnifies the sensation of speed and sound with maniacal fervour. It’s like jumping to warp – and from just 1.6 litres, remember. This GTi is feverishly fast.

Yet it’s the dynamic delicacy – courtesy of the latest 308’s brilliantly efficient EMP2 architecture – that is outstanding, from precise, measured, and intoxicatingly tactile steering, to the chassis’ control, which feels simultaneously planted and light-footed. Aided by the 270’s limited slip diff and terrific brakes, it devours corners. Yet the suspension – lower, firmer, and stronger, but essentially the same MacPherson struts/torsion beam set-up as in lesser 308s – can still ably soak up the rough stuff. No adaptive dampers required, even on 235/35ZR19s. Result? The GTi’s athleticism isn’t at the cost of comfort. 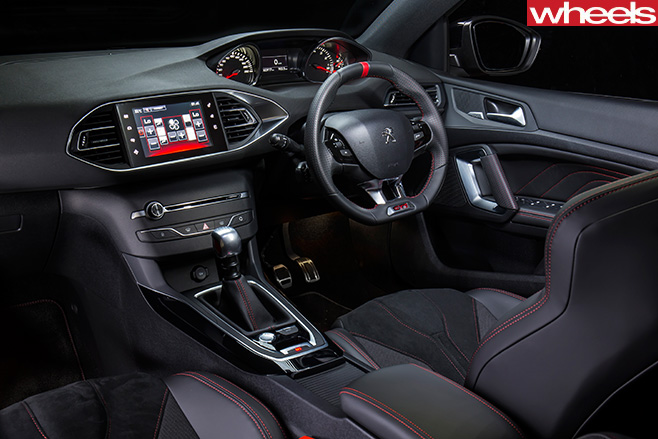 Downsides? Stand up, slightly notchy gear shift. It’s not terrible, but most rivals feel slicker. Pity, because, from the quality cabin and elegant dash to the cosseting sports seats and generous standard spec, the GTI’s classy interior mirrors the handsome exterior. Note, though, that the anti-clockwise tacho is plain wrong.

Minor aberrations aside, the 308 GTi has the alacrity and grace to darken the Golf GTI’s days. It’s as if Peugeot needed all 15 years to recapture the 306 GTI-6 spirit. The ultimate hot-hatch shootout looms…