Renault’s Koleos impresses with design, though the technology under the skin could be better

Competition, as they say, improves the breed. That well-worn cliche applies just as much as it does in the world of sport as it does to the world of cars, and when it comes to cars there are few segments that are more competitive than the SUV market.

Renault has been battling the competition in SUV-land for a while now with the mid-sized Koleos, which has been around since 2008. Its replacement only arrived this year, meaning the first-generation model had soldiered on for a whopping eight years without major change.

Now, that car wasn’t much to write home about either, which meant up until now Renault had the double-handicap of not only having an uncompetitive vehicle in a highly competitive segment, but an extremely old one as well. 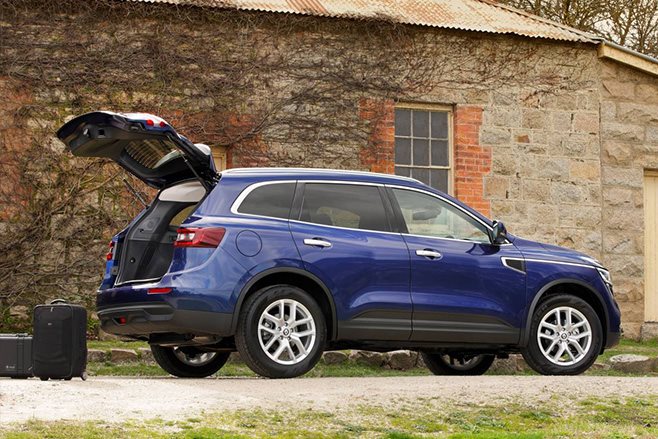 Luckily for Renault, the car that’s replaced it is a hell of a lot better. So much so, that the Koleos has, in one fell swoop, gone from the back of the pack to being a car that you’d consider against mainstream choices like the Toyota RAV4, Kia Sportage and Hyundai Tucson.

A single engine is offered for the time being – a naturally-aspirated 2.5-litre petrol four-pot with a modest 126kW and 226Nm –while all models are equipped with a CVT automatic as standard. Depending on the grade, the Koleos is available either with front-wheel drive or all-wheel drive.

Now, there’s a lot riding on the shoulders of this Koleos, at least for Renault in Australia. There seems to be no end to Australia’s appetite for family-sized SUVs like this one, and with the previous Koleos being so ancient and underwhelming it’s important that Renault gets this one right.

The company reckons they’ve got the formula sorted out with this one, though, and so confident are they that it’ll be a hit, they’ve decided that Australia will be the first market in the world to receive it. So, is their confidence justified?

First impressions are good. This is a thoroughly modern car compared to its predecessor, and it shows. The design is clean and straightforward, there’s heaps of technology – like this electronic instrument panel, for example, and there’s plenty of space and decent outward vision from the driver’s seat.

And, it’s the Intens grade that’s the pick of the litter. It may be the most expensive, but it’s packed with features that are rare at its price point. Features like heated and cooled front seats, LED headlamps, a hands-free tailgate and a huge 8.7-inch portrait-format touchscreen display that’s as responsive and easy to use as a smartphone. 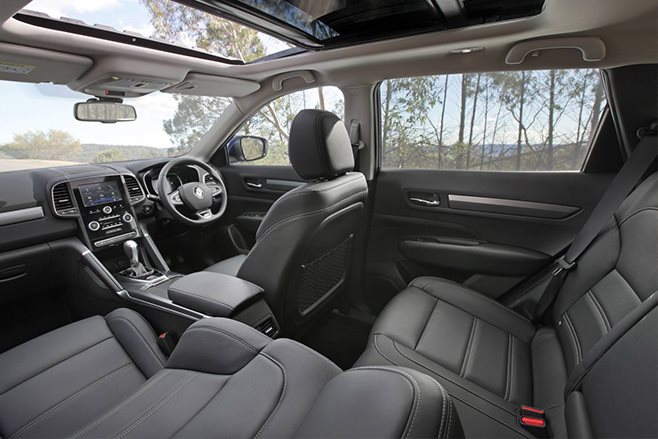 In the back, there’s enough space for a couple of adults (or three kids), and in the Intens there’s even a pair of rear USB outlets to keep phones and tablets charged up. There’s no third row, but you will find a reasonably spacious boot with 458 litres of capacity with the rear seats up. Need more? Just pull these handles to drop the rear seats and you’ll get around 1690 litres of luggage volume.

There are some shortcomings. The new Koleos is based on the Nissan X-Trail – which, by the way, isn’t necessarily a bad thing – but you can tell its origins when you see Nissan-sourced switchgear on the doors.

And speaking of switches, why does Renault insist on putting the cruise control/speed limiter toggle down on the centre console, where it’s so hard to find?

The interior packaging is great for five people but some might wish there was a third row. Others might simply wish the Koleos had a bit more shove under the bonnet, because this X-Trail sourced powertrain isn’t all that special.

Not only is the atmo 2.5-litre engine less powerful than many similarly-sized engines from rival carmakers, but the CVT can be a bit lazy to respond – especially if you click it into “Eco” mode – and when loaded up it likes to make a lot of noise up steep hills.

A diesel engine will join the Koleos range around the middle of next year, which should transform the car’s driveability. Until then, however, the underpowered petrol and gluggy CVT is your only choice.

It rides and handles fine for a midsize SUV, so no complaints there. The steering is also nicely weighted, which we certainly appreciate. But what we’d like to see is a two-wheel drive version of the range-topping Intens grade. The all-wheel drive hardware that’s standard on that model is great if the road is greasy or muddy, but the rest of the time it’s just dead weight – and it’s weight that makes this engine feel like a bit of a slug.

Not only would a two-wheel drive Intens be cheaper, it would also be lighter and feel a bit zippier too.

The Renault Koleos has come a long way, and it’s a vastly improved product. There are areas where it could do with a little more polish and the mechanical package is nothing special, but when it comes to carting around five people in comfort Koleos finally has the right stuff. 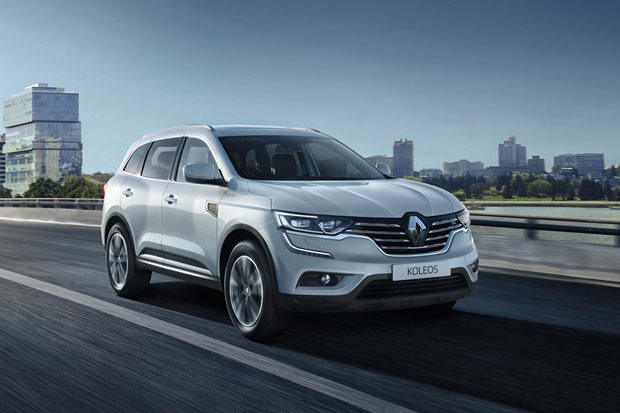 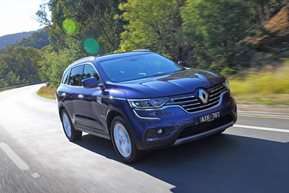