It was the best of the rest in 2014. Can the Subaru Forester still hold the high ground?

WHAT IS IT?
The Subaru Forester is a staple of the Japanese brand’s range, and combines a spacious interior with genuine off-road credentials in a well-engineered, sturdy and well-mannered package. It’s one of the brand’s best-selling models in Australia, and has benefitted from the sales swell of SUVs in this country.

WHY WE’RE DRIVING IT
The Subaru has been given a mid-life makeover to stave off increasingly competent opposition.

THE WHEELS VERDICT
The fourth-generation Subaru Forester has gained useful improvements for 2016, and it remains one of the class benchmarks even against younger rivals. Its ride and handling, driveline and packaging make it a well-mannered, practical SUV with rugged looks and abilities. Its toughest task will be fending off glitzier, fresher opposition.

PLUS: Well-mannered around town yet more than capable on the rough stuff; smooth, grunty engine; great fuel economy and safety levels; no price increase despite greater equipment levels
MINUS: Doesn’t feel as fresh or edgy and much younger rivals; CVT hits a wall when asked to work hard; meagre changes for 2016 may not be enough to keep its head above water. THE WHEELS REVIEW
MUCH has happened since the Subaru Forester won the Wheels SUV mega-test. A nine-car street brawl between an armada of rivals – including the Mazda CX-5, Honda CR-V and Ford Kuga – saw the Subaru come out as the best dirty weekender of the lot. That was August 2014. Now, the fourth-generation Forester faces increasingly stiff competition from younger, smarter rivals as the SUV market becomes the bloodiest battle between carmakers in Oz.

The Forester has to win over buyers of the new Hyundai Tucson, for instance, and an all-new Kia Sportage. What’s more, there’s been a new Nissan Qashqai and X-Trail to fend off, and more recently the Toyota RAV4 – the only nameplate in this class to pre-date the Forester’s 22-year legacy – has been given a nip and tuck for a more athletic, less awkward look.

While there’s no change in the Forester’s list price, which kicks off at $29,990 for the 2.0 i-L, there’s a raft of changes to help hone an already appealing package. For 2016, Forester has been given a fresh set of bumpers with LED daytime running lights, new grille and headlamps, and LED taillights. You may be hard-pressed to spot the difference unless the MY16 is parked alongside last year’s model, though.

The $39,490 Subaru Forester 2.5i-S version that we’re driving here is the mid-point of the range, and is expected to make up more than half of all Forester sales. In terms of extra fruit over the existing model, the i-S adds cornering headlamps and new DRLs, as well as fresh 18-inch alloy wheel patterns and a new engine cover for improved aerodynamics.

It’s the higher-spec Foresters that have had more kit added to the list. Most notably is that EyeSight, Subaru’s camera-based safety technology, has had its skillset broadened. While it was already standard on the CVT 2.5i-S, it now includes sway warning and anti-fatigue functions in addition to autonomous emergency braking and radar cruise control. 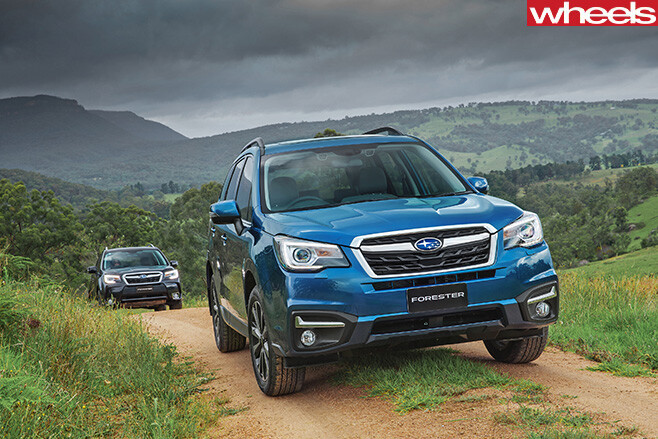 There’s also a suite of minor changes aimed at reducing NVH including thicker door glass and new door rubbers, as well as revised, locally tuned suspension. While we lavish praise on Hyundai and Kia for developing local suspension tunes, Subaru has been giving its models an Aussie twang for more than two decades, and the Forester has been tweaked for more compliance to improve refinement. There are new coil springs, a stiffer front cross-member up front, while the rear end has a thicker stabiliser bar, revised geometry and a new set of coil springs, too.

On the road, there’s also revised steering, with the electric system’s ratio changed from 15.5:1 to a quicker 14.0:1, meaning fewer inputs when cornering. On the wet, occasionally winding limestone roads of South Australia where we briefly tested the new Forester, the Subaru’s steering showed precision and was well weighted. It didn’t call for flailing arms to negotiate a potholed road. It also meant that it could storm a battalion of dips, ruts, crevices and man-size holes without the need for any additional driver input, as its composure and excellent ride managed the drama beneath with supreme efficiency. Head toss, vibrations and drama were all sheltered; the body control helping the wagon to sit flat and shelter its occupants from the harsh exterior environs.

On smoother stuff, the compliant ride is comfortable, and that composure means that mid-corner bumps don’t upset the Forester. The claimed improvements in noise, vibration and harshness were difficult to certify, as the rain on our rugged test route made an awful racket. We can say that the strong 2.5-litre engine is smooth, protesting only when you give it a gutful. The CVT will often hover at a noisy 5800rpm when climbing a steep, long hill. It’s better at slow speeds, and cruises quietly at 100km/h on the highway.

Add to this the fact that none of the Forester’s existing talents, from its durable cabin, overall ruggedness to its interior space and ‘non-negotiables’ such as full-size spare wheel, and you have a vehicle that’s highly compelling in its class. To top it off, prices haven’t moved an inch.

Is it chalk and cheese between the MY16 Forester and its predecessor? No. Yet Subaru’s changes have made what was an already capable, quality SUV even better.