Has fast-developing Kia taken another big step forward with its new-generation Sportage?

The 2016 Sportage is a new-generation medium SUV from Kia. It builds on the strengths of the already good third-generation Sportage while adding polish.

It’s a new player in a very popular segment from the rapidly improving Korean car maker, and it has just gone on sale. Can Kia score another direct hit? 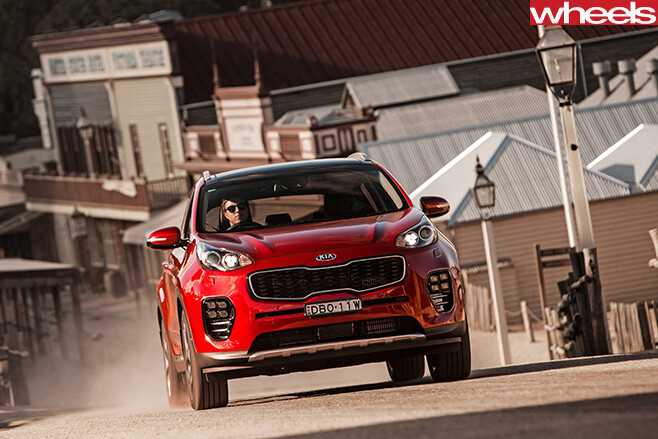 The 2016 Kia Sportage is a terrific family car, offering a great looks, a top quality interior with excellent equipment at each of the three spec levels, an excellent turbo-diesel and good petrol engines.

MINUS: Petrol 2.0 only just enough engine; frontal styling a matter of taste; it would be nice to have autonomous emergency braking across the range

CAST YOUR mind back to the flimsy, uninspiring SUVs that once wore the Sportage badge. The increasingly uttered “Geez, Kia has come a long way,” is truer than ever of the new model.

The outgoing third-gen Sportage, introduced in 2010, had already covered ground, retaining the core Kia qualities of generous equipment and keen pricing alongside newer ones, such as Euro-sharp Schreyer styling, steering and handling smarts and a seven-year warranty. That’s precisely where the new model picks up. The fourth-generation Sportage builds on the body solidity, adds interior appeal, polishes steering and handling, and comes wrapped in convincing, Cayenne-spiced styling (though the ‘Tiger Nose’ snout is a matter of taste). It still brings equipment and value, and ride quality on tuned-for-Australia suspension (and 19s on the flagship Platinum) takes a concerted step up.

A switch to Korean production, from the third-gen’s mid-life switch to Slovakian supply, brings back the 2.4-litre non-turbo petrol four, but results in the binning of the direct-injected 2.0-litre four for a multi-point version. Outputs for the 2.0 drop from 122kW/205Nm to 114kW/192Nm. But fuel consumption also falls by about a litre to 7.9L/100km on the official combined cycle test, despite kerb weight increases of more than 100kg. 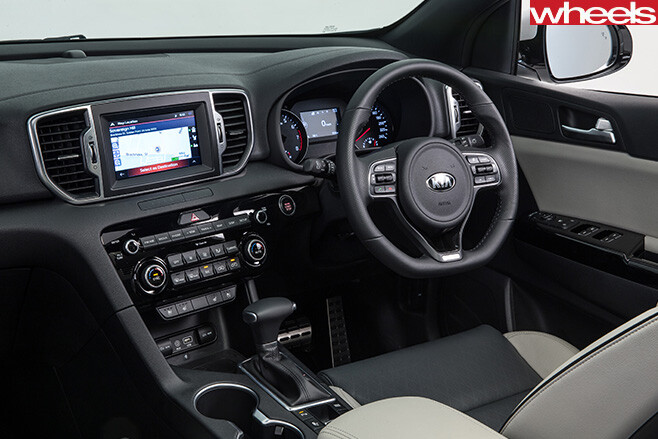 The 2.0 is flexible and has been refined away into the background, along with tyre noise, suspension noise and most wind noise – other than some exterior mirror rustle. But the 2.4, which didn’t and still doesn’t have direct petrol injection, is the better of the petrol engines, offering 237Nm and pairing agreeably with the range-issue six-speed automatic. However, it’s only available in the Platinum.

And by the time you’re into to the impressive looking and enviably equipped range-topper, you might as well opt for the stout 400Nm 2.0-litre turbo-diesel, which is an AWD-only proposition across the three variants. A great modern oil-burner, it’s a refined, immediate and efficient performer, offering official consumption of 6.8L/100km in mixed use and 5.5L/100km on the highway, which also brings a boost in range from a fill of the 62-litre fuel tank.

A good electric steering system – tautened in the switch from ‘normal’ or ‘eco’ to ‘sport’, along with the throttle and transmission calibration – and disciplined dynamics on strut front and redesigned multi-link rear suspension ensures a level of driver appeal that’s still not standard in an SUV.

There’s space to sprawl in most directions on the comfortably angled rear seat. An adjustable backrest angle, centre rear air-con vents and 12V and USB sockets add to the appeal of riding in the second row. It’s remarkable how well the Platinum rides bad Aussie backroads, even on GT Line 19s. The big wheels, powered panoramic sunroof and GT Line sports package set off the flagship, which will no doubt have tyre-kickers enquiring which Euro brand is responsible.

But even the $28,990 front-drive entry-level model ($33,990 for the diesel) is endowed with cruise, a reversing camera, rear parking sensors, dusk-sensing headlights, and a Bluetooth and iPhone compatible audio system with a 7.0-inch colour LCD touchscreen and steering wheel controls.

Long equipment lists, among persuasive strengths, are nothing new in a Kia, but the Sportage wasn’t always this great to drive or this nice to own.

Click here to read the full range review of the Kia sportage.

Genesis reveals its sporty-looking new mid-sized wagon, and while an Australian debut is confirmed, we can thank Europe for its existence