The Kia Sportage is a great looking medium SUV that is comfortable and very quiet to ride in, and fun to drive. Updated in mid-2018, it has a refreshed cabin, improved suspension, and autonomous emergency braking as standard across the range.

Diesel-engined, all-wheel-drive versions of the Sportage have more than enough power with terrific fuel economy, and all versions have Apple CarPlay and Android Auto connectivity. Kia’s seven-year warranty is one of the best available.

You might wish for more grunt in the 2.0-litre petrol versions – especially if you have driven the diesel.

How the interior seems a little dated after you've seen the Kia Seltos and new Sorento. That said it's very well equipped.

The Sportage drives either its front wheels or all four wheels, depending on the version. It is classed as a medium SUV, lower priced.

What features does every Kia Sportage have?

The 2.0-litre turbo-diesel engine uses the least fuel, at 6.4 litres/100km on the official test (city and country combined).

Paired with an eight-speed automatic gearbox and all-wheel-drive traction, it feels as though it has much more performance than the petrol-engined versions.

The main reason you might not choose the diesel is that you want to pay less for a Sportage, by choosing front-wheel drive and the 2.0-litre petrol engine also offered in the cheaper S, SX, and SX+ versions that uses about 7.9 litres/100km.

You may also want a more affordable six-speed manual transmission, available with the petrol Sportage S and SX.

The more powerful alternative to the diesel in the more expensive Sportage GT-Line is a bigger, 2.4-litre petrol engine. It uses about 8.5 litres/100km but gives you about 20 per cent more power than the smaller petrol – and, like the diesel, it is all-wheel-drive only.

The least costly version, the Sportage S, has cloth seats, 7.0-inch touchscreen, 17-inch wheels, and the features of every Sportage. It comes standard with the 2.0-litre petrol engine with a six-speed manual gearbox and front-wheel drive as standard. A six-speed automatic gearbox, or a more expensive diesel engine and all-wheel drive (which aids security on loose or slippery surfaces) are available at extra cost.

For extra features, you could spend more for a Sportage SX, which like the S is available with the manual and auto the 2.0-litre petrol with front-wheel drive, and the more costly 2.0-litre diesel all-wheel drive.

Paying more again for a Sportage SX+ gets you those features plus:

The Sportage GT-Line, the most expensive version, has all-wheel drive as standard and the bigger more powerful 2.4-litre petrol engine. Other differences include:

Ride at low speeds gets slightly rougher as the wheel size rises from 17 inches, on the Sportage S, to 18 inches, on the SX and SX+, and then to 19 inches on the GT Line – which also has firmer sports suspension. The bigger wheels use lower-profile tyres, which have less sidewall flex to cushion you from bumps on the road.

Clear White is a standard colour on the Sportage. The other six shades carry a premium paint charge of about $500.

How comfortable is the Kia Sportage?

It is easy to get comfortable in the driver’s seat of a Sportage: you can adjust it manually in six dimensions in S and SX. The driver’s seat in the Sportage SX+ or GT-Line has 10-way powered adjustment, and the front passenger seat in the GT Line has eight.

You can also move the steering wheel further from you or bring it closer, and adjust it for tilt.

The Sportage cabin is roomy, with a great view of the road. Instruments and controls are laid out neatly. The interior is very well-built, and is finished using good-quality plastics, fabric and carpet.

The Sportage rides more firmly than some alternative vehicles, but the ride is not so firm that it becomes tiring. The Sportage cabin remains a very quiet place, with little suspension, tyre or wind noise intruding: it is among the most peaceful cabins in its class.

What about safety in a Kia Sportage?

Safety high points in a Sportage include autonomous emergency braking (AEB), and lane-keeping assist that helps steer the Sportage within the road markings.

The AEB can initiate a full emergency stop automatically from speeds up to 80km/h if the system senses you are in danger of driving into something. First it sounds a warning; if you ignore that, it applies the brakes partially; and if you do not intervene it applies maximum braking. (At speeds between 80 and 180km/h it warns and brakes partially, but it will not brake as hard as possible on its own.)

There’s also a standard reversing camera and a seatbelt warning for every seat – a simple but valuable feature for those with children old enough to unfasten their belts. Dusk-sensing headlights, six airbags and the mandatory stability control complete an excellent standard package.

The Sportage GT-Line adds radar- and camera-based adaptive cruise control, blind-spot monitoring, and rear cross-traffic alert that detects if a vehicle, cyclist or pedestrian is approaching from the side while the SUV is reversing.

Yes. The Kia Sportage is among the most enjoyable medium SUVs available.

The electrically-assisted power steering feels just right. The Sportage is easy to steer but brings you a good sense of connection with the road, which is satisfying and inspires confidence.

A three-step Drive Mode Select system lets you adjust the weight of the steering. It also adjusts how immediately the car reacts to your pressure on the accelerator pedal, through the engine and auto gearbox. There are relaxed Normal and Eco modes, and an aptly named Sport mode.

The Sportage has a quite firm suspension, which helps it respond quickly to steering inputs and to corner with relatively little body roll. The firmness also prevents the body from bobbing on the springs after the car hits a big bump on the road. All-wheel-drive versions offer more stability in slippery conditions, such as on gravel or wet roads. Even with AWD, most medium SUVs are suited to only light off-road duty, such as snowy conditions or reasonably smooth dirt tracks.

But the Sportage remains one of the best of this breed, thanks to good ground clearance, its full-size spare wheel, and its downhill brake control system, which can regulate your speed automatically on steep downhill runs off-road (leaving you free to concentrate on steering).

The turbo-diesel engine available with any AWD Sportage has a lot more grunt than the 2.0-litre petrol, and in many driving conditions feels much more responsive than even the 2.4-litre petrol (the 2.4 petrol winds up to equal it if you hold your foot to the floor). The diesel is easily the most desirable engine of the three.

The 2.0 petrol comes with front-wheel-drive versions of the Sportage S, SX, and SX Plus. Ordinarily, it offers enough pull, but when it’s asked to accelerate hard, carry a heavy load or climb a steep hill, it makes much harder work of it than diesel versions.

The 2.4 petrol, available with the AWD Sportage GT-Line, works very well in most driving but still can’t match the diesel.

Rear seating in the Sportage is among the roomiest in a compact SUV. The wide rear-door opening makes getting in and out easier and is also helpful when having to lean in to secure children in booster seats or capsules. 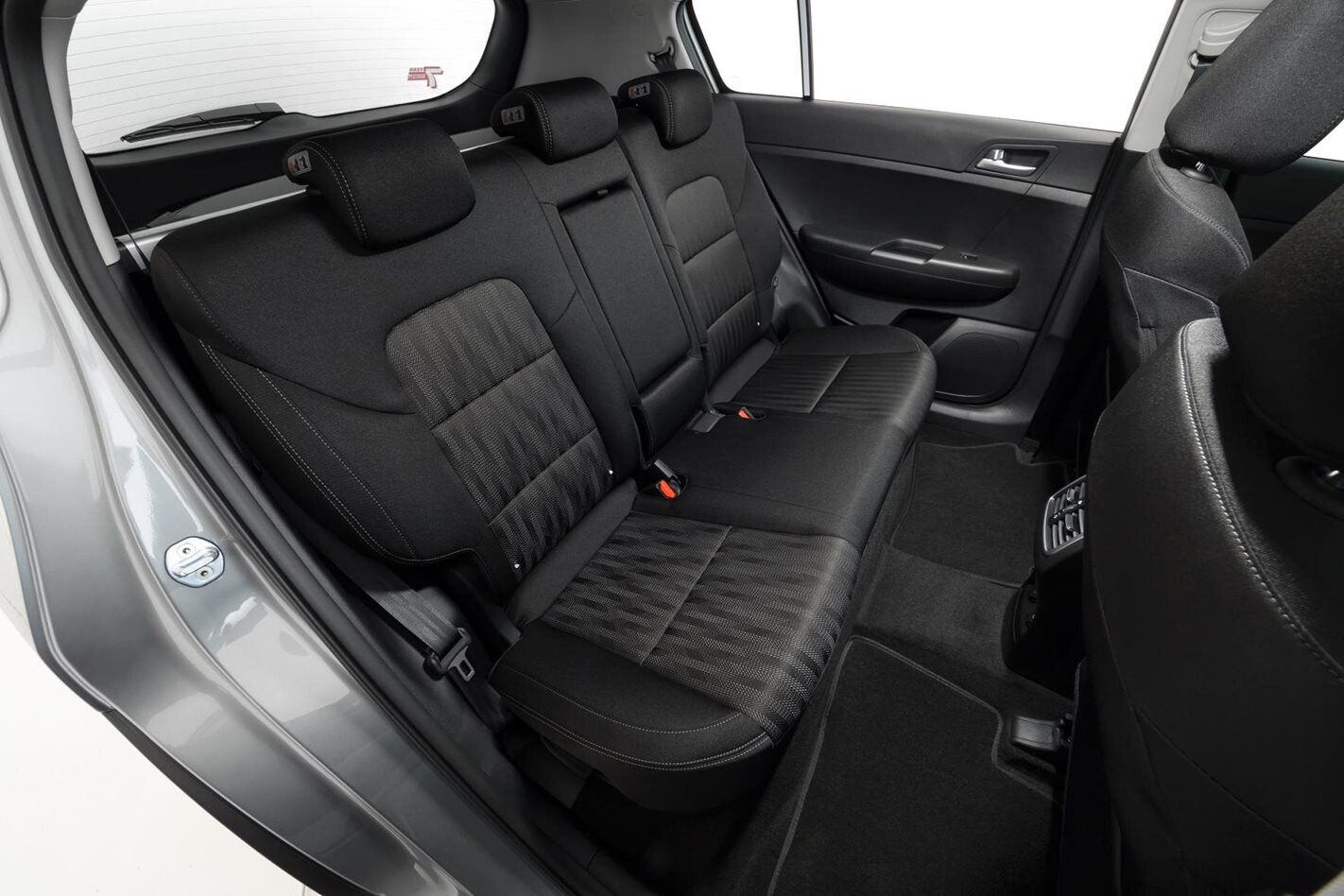 The seats offer good back, under-thigh and lateral support, with enough headroom even for adults. Cushions are comfortable, and the leather and cloth trim options feels like they will wear well. The 60:40 split seat’s backrest adjusts for angle in seven steps.

The view is good forward and out of the side windows, and the rear of the cabin is well isolated from tyre and suspension noise.

Rear-seat passengers have their own heating and cooling vents, located behind the centre console.

The Sportage is good at carrying lots of luggage, thanks to a 466-litre cargo bay. This expands to 1455 litres with the 60/40 rear seatbacks folded down. 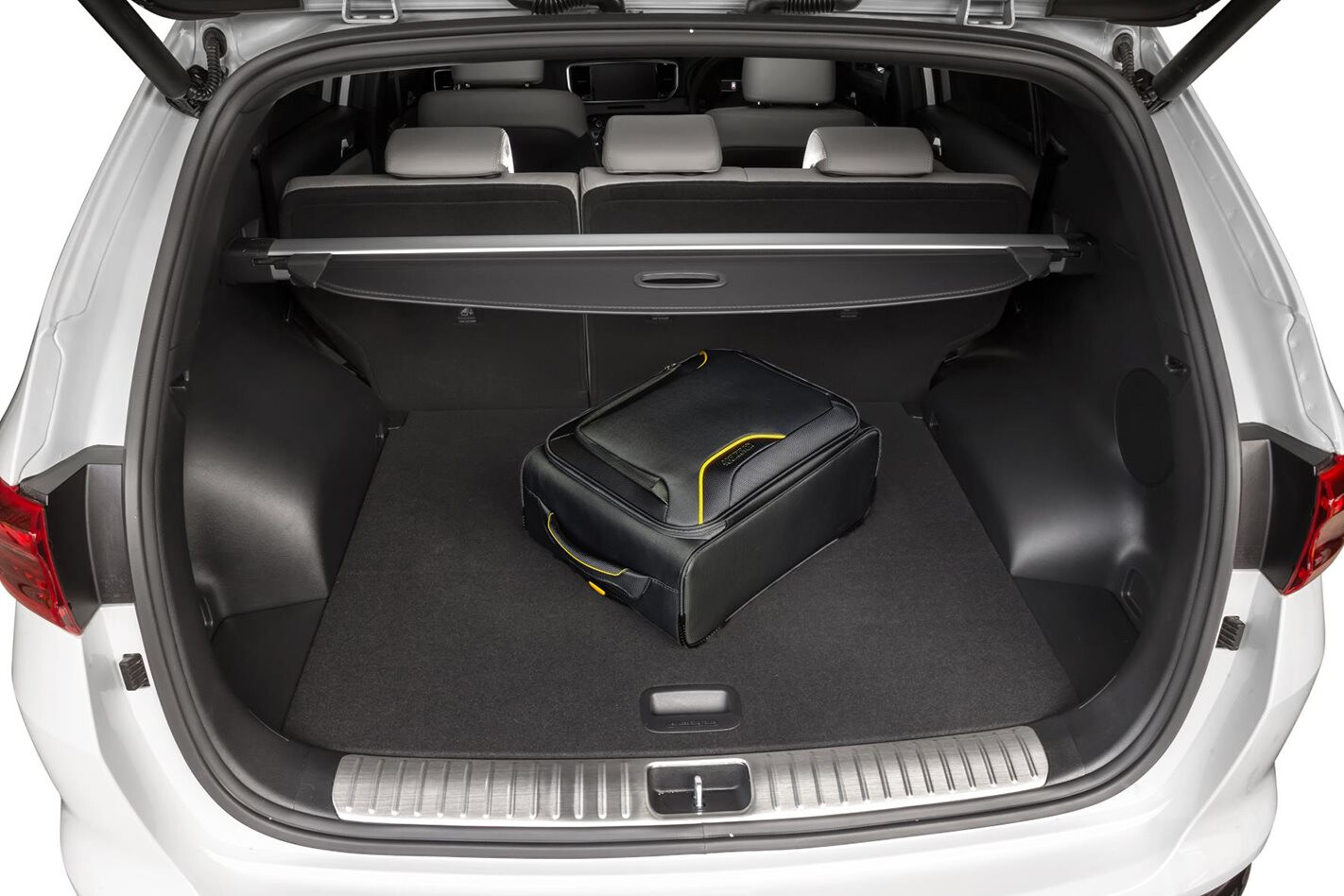 A one-piece tailgate lifts upwards to reveal a large opening, which makes it easy to load bulky items.

Where does Kia make the Sportage?

The Kia Sportage is manufactured in South Korea.

A more powerful, turbocharged petrol engine, which alternatives such as the Ford Escape, Volkswagen Tiguan, Peugeot 3008 and Hyundai Tucson offer. This is also available in the slightly Kia Seltos.

The Nissan X-Trail and Mitsubishi Outlander both can seat seven people.

Our reviewers like the Kia Sportage SX diesel. The diesel is desirable for its effortless acceleration and low fuel use, and the added versatility of all-wheel drive. The SX brings you a lot of desirable extra equipment over the (still well-equipped) Sportage S diesel.

Are there plans to update the Sportage soon?

This fourth-generation Kia Sportage arrived about February 2016, sourced from Kia’s Korean homeland – rather than Slovakia, where the previous model Sportage was built.

For the 2017 model year, Kia added support for Android Auto and Apple CarPlay (earlier cars could be retro-fitted), and renamed the Platinum trim level the GT Line. About April 2017 the Si Premium arrived to enhance choice in front-drive Sportages.

A mid-cycle facelift for the Sportage arrived in mid-2018 and rolled out autonomous emergency braking across the range beyond just the GT Line, and added a diesel AWD option to the Si Premium spec. The cabin was revamped and the chassis and suspension were further enhanced to suit Australian conditions.

Kia changed some badge names in early 2019, with the Si, Si Premium and SLi respectively re-designated the S, SX and SX+.

In September 2019 Kia added a six-speed manual gearbox option to the S and SX, which helped bring the entry-level retail price of the Sportage under $30,000.

An all-new Sportage is expected in 2022.

MOREKia Sportage news and reviews
7.6/10Score
Things we like
Not so much