Subaru is about to bring us a new flagship Forester, adding an STi-tuned chassis to the turbo XT. It shows promise…

Subaru’s formerly all-conquering Forester has come off the boil, with the Mazda CX-5 doubling its sales. So a limited-edition tS flagship is coming, with an STi-tuned performance chassis.

WHAT IS IT?
The Forester tS is basically the top-line XT turbo with an STi-tuned chassis and several other mods to improve handling and body control. It is thus a unique proposition in the medium SUV segment, or will be when sales start in May.

WHY WE'RE TESTING IT
The Forester has long been regarded as a great all-rounder, avoiding many of the pitfalls of its top-heavy rivals thanks to the low centre of gravity afforded by its boxer drivetrain. But outputs from the big turbo units in Forester XTs (and their GT predecessors) have never quite gelled with the SUV chassis. Can the STi crew help? 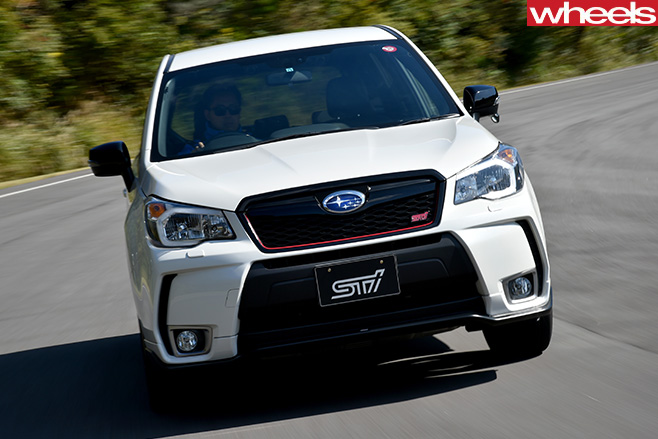 THE WHEELS VERDICT
Will we finally see an affordable SUV that truly drives like a hot hatch? The upcoming Forester tS is certainly shaping up to be that car, and the differences between it and the mechanically similar Japan Domestic Market-spec Forester XT were pronounced around a tight bitumen track designed for racing bicycles. We had way less body roll and a whole lot more control than usual. How any of that translates on Australian roads from next May is uncertain, but the basic ingredients suggest a performance crossover worthy of the WRX – if not STi – badge. 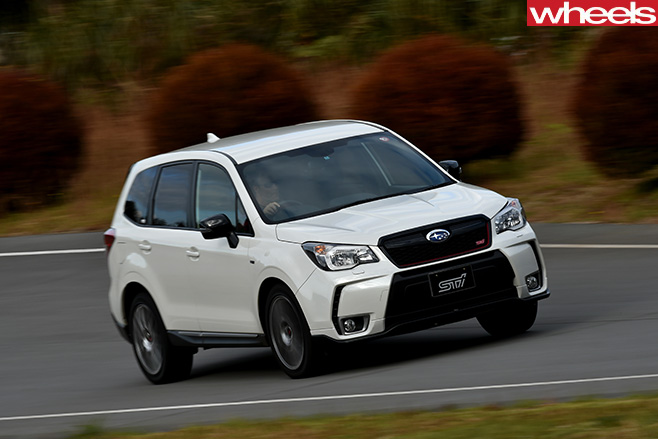 THE WHEELS REVIEW
SPEEDY SUVs. Subaru was a pioneer of the sub-genre with the original Forester GT back in the late ‘90s, but a high-riding crossover crossed with a high-output engine can all too often be a fast track to roly poly-ville. Fully sick sums it up perfectly.

Whether Fuji Heavy Industries intended on demonstrating this with a Japan domestic -spec Forester XT, pitching it (literally) against the STi-tuned tS around the 5km long, 2020 Tokyo Olympics bicycle training track, is not known. However, the former felt like a loose handful against the latter’s controlled confidence, suggesting that SUV buyers seeking proper dynamics don’t have to fork out $100K on an Audi SQ5 or Porsche Macan. 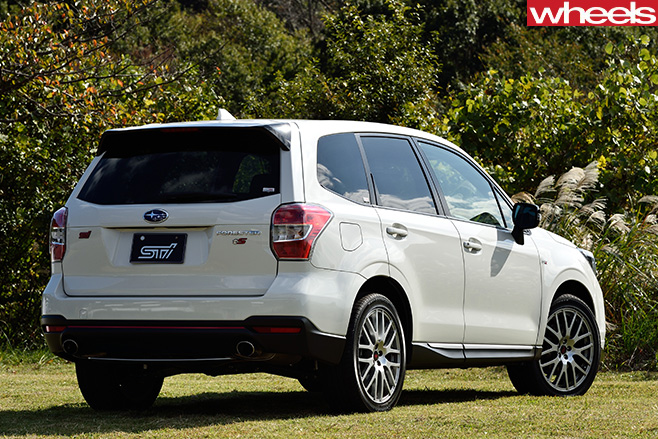 Destined for Australia and nowhere else outside Japan before next winter, the tS is what happens when an XT returns from the STi clinic. Among the remedies are a retuned ‘S#’ (Sport Sharp) SI-Drive driving mode function, a 15mm lower ride height, revised stability controls, an adjustable-strut tower brace, a stronger rear subframe, aerofoils beneath the vehicle, Brembo brakes, and BBS-designed 19-inch alloys. The 206kW Japanese edition also gains a revised engine control unit, unique CVT Continuously Variable Transmission settings, and a gearbox oil cooler. Subaru won’t say whether ours will too. Current Oz-bound XTs deliver just 177kW.

Unsurprisingly, this STi parts-bin raid results in a more hunkered down Forester that’s hungrier for corners, far flatter when driven fast through them, and a whole lot surer in its reactions and responses. Over exactly the same snaking route, the XT seemed floatier.

Questions do remain about how such a well-tied SUV will ride on our rubbish roads, however. At least extra soundproofing helps hush the thing. FHI says the aim is to promote “on-road tough, speed, and class, so drivers at every skill level can enjoy”. 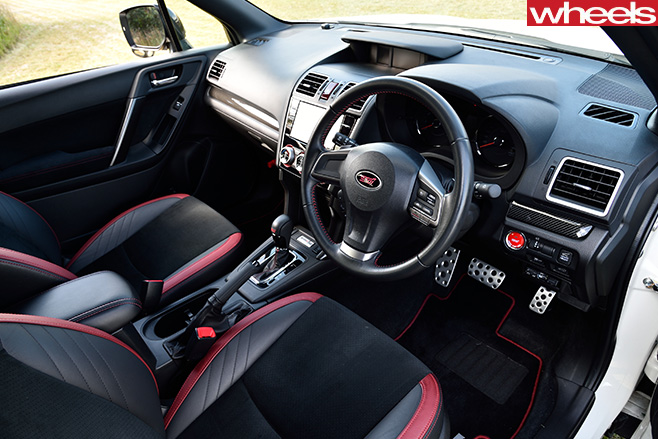 Subaru has also thrown its most luxurious-looking part-leather upholstery and glossiest materials inside for a bit more pizzazz, though the tS we sampled was one of the pre-facelift MY15 versions that sold out in its home market ages ago. The same may happen here. Just 300 examples will come, in either Pearl White or WRX Blue.

Speaking of which, while the tS may not arrive with more power than an XT, improvements to handling, roadholding and refinement point to Australia’s first properly WRX-esque medium SUV.

** Figures are for Japanese market MY16 Forester XT