LIKE an electric car but without the range anxiety, Toyota’s Mirai is one of the new breed of hydrogen fuel cell cars seen as crucial part of an emissions-free future.

WHAT IS IT?
Toyota’s first mass produced hydrogen fuel cell car. The Mirai – a name that means “future” – is about the same size as a Prius. The fuel cell combines hydrogen and oxygen to create a chemical reaction that makes electricity, which is then used to power an electric motor, and water.

WHY WE’RE TESTING IT
Toyota has imported three Mirais to Australia as part of a campaign to garner government and industry support for hydrogen vehicles. The company wants to convince key stakeholders to invest in hydrogen refuelling infrastructure, which would pave the way for cars such as the Mirai to be sold in Australia. MAIN RIVALS
Anything zero emissions, from the Tesla Model S to the BMW i3

THE WHEELS VERDICT
Surprisingly normal to drive, but it’s difficult to imagine anyone spending big money on a car such as this, especially with a rush of long range electric cars coming in the next few years. Hydrogen fuel cells seem to make sense for long-distance driving, but for most people a 500km electric car should do the trick.

PLUS: Can be refuelled like a regular car; 550km range from tank; decent performance; spacious interior
MINUS: There’s currently nowhere in Australia to refuel it; the cost makes it seriously unappealing; electric cars will make more sense for most people 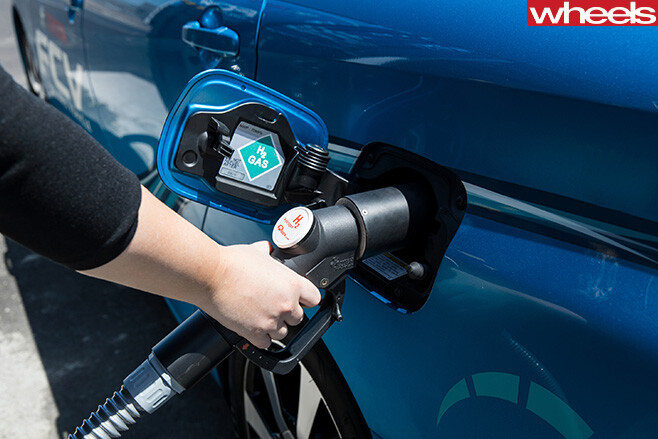 THE WHEELS REVIEW
ITS name means “future” in Japanese, which says plenty about the latest Toyota eco warrior. Similar to what the Prius did for hybrid two decades ago, the Mirai is trying to lead the way for hydrogen fuel cells as the world glacially eases towards a emissions-free automotive future.

Similar to the Prius, its design is about slipping through the air cleanly (the co-efficient of drag is 0.29) and being as light as possible, although having specially designed 17-inch alloy wheels save 2kg seems superfluous when the Mirai weighs a podgy 1850kg. Blame that on the twin high-pressure hydrogen fuel tanks (one under the rear seat, the other behind the rear seat), the hydrogen fuel cell (which performs a chemical reaction to produce electricity) and the batteries borrowed from the Prius.

Yet as much as there’s tricky tech going on beneath the skin, the Mirai is otherwise about being normal. There are four seats, a steering wheel and pedals. And, with the exception of the very unfuturistic foot-operated park brake, there’s a modern flavour to the interior, from the touch buttons for the ventilation system to the Prius-inspired central instrument cluster and stubby gear selector. Despite generous space for four people – only taller adults in the rear will find follicles contacting the roof lining – the boot is short and truncated, accommodating only 361 litres of luggage and unable to be expanded with folding seats due to the positioning of the hydrogen tank.

Starting it is done with the press of a button, at which points things light up inside but no mechanical components come to life. Step on the throttle and response is immediate and generous. The 113kW of power is less relevant than the 335Nm, something that shifts the heavy body to 100km/h in 9.6 seconds.

The Toyota Mirai drives almost identically to an electric car, with near-instant throttle response. Performance is acceptable rather than exciting, and it’s accompanied by a subtle sound that’s like a cross between a whir and fast-paced clicking (it’s something to do with the hydrogen fuel cell). 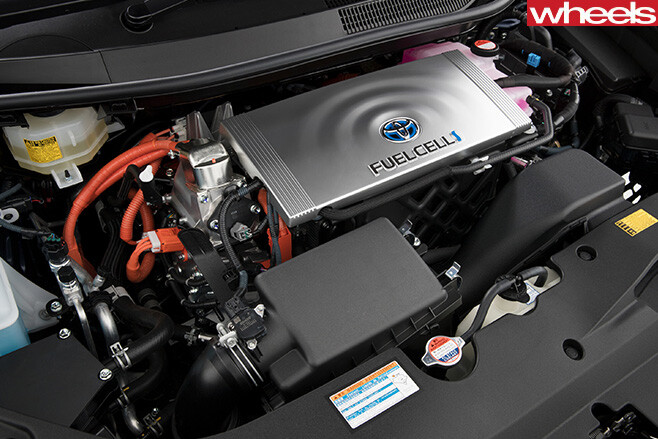 Get too eager through a corner and the weight becomes obvious. Soft suspension has the body leaning, and with weight off an inside driven front wheel the low rolling resistance Michelin Primacy 3 tyres can squeal as the generous dollop of torque attempts to reconnect with bitumen.

Our brief drive wasn’t enough to explore the dynamic spectrum – it was an extended lap of the block near Toyota’s Sydney HQ – but it highlighted that the biggest smile you’ll get from the Mirai is because you’ve saved some dolphins or kept some flower petals plump, not because you’ve nailed an apex.

Overly light steering ensures it’s light-on for soul, while the brakes are responsive but with sponginess to the pedal. The Mirai is about getting somewhere efficiently and calmly rather than enjoying the eco-friendly drive.

So while the Mirai is still years away from being sold in Australia – if at all (it depends largely on refuelling infrastructure) - it’s difficult to see its circa-$80,000 price tag appealing to anyone other than those utterly devoted to the environmental cause. As Australia has proven in the past, almost none of us are.