Car makers seem determined that battery-powered vehicles won’t be switched off for a third time.

The electric car died in the early 20th century and again in the 1970s, but the range of options is set to be extended extensively from 2018 onwards.

Volkswagen Group, looking to combust the diesel-gate saga into history as quickly as possible, has announced the most aggressive EV strategy yet.

It plans to reach 2025 with about a quarter of its sales comprising vehicles powered by electricity alone. The company embodied its ambitions at September’s Paris motor show with the VW ID concept – a hatchback it believes will sit alongside the original versions of the Beetle and Golf for automotive significance.

Powered by a 125kW electric motor claimed to be capable of a 600km range on a single charge, VW also says mass appeal will be aided by it being priced similarly to a Golf TDI – meaning about $35,000. The Audi and Porsche brands will be among about 30 EVs emerging from the VW Group over the next nine years. Porsche’s production version of its 2015 Mission E concept is due in 2020; Audi’s first will be the Q6 e-tron, which is all electric despite sharing identical branding with the Audi A3 e-tron plug-in hybrid.

Its electrification intentions are so serious, Audi has abandoned its long and dominant love affair with Le Mans to focus its efforts on the relatively new electric-focused motorsport series Formula E.

Fellow Le Mans winner Jaguar is following suit – both with Formula E entry and an electric SUV in 2018. The British brand unveiled its i-Pace this week at the 2016 Los Angeles motor show, a vehicle that will match the Q6 e-tron’s 500km range – and its 300kW/700Nm outputs matching the full potential of Mercedes-Benz’s new EQ electric-drive system. 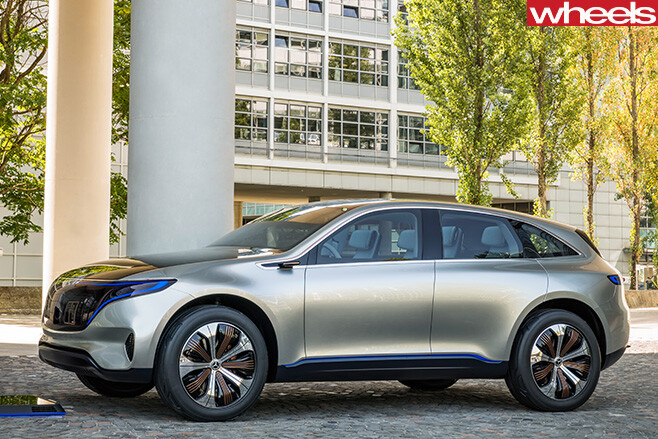 EQ debuted in Paris and didn’t just preview a new electric SUV due in 2020, but heralded a new Daimler sub-brand of the same initials that stand for Electric Intelligence.

Boss Dr Zetsche said Mercedes had the ability to cover every vehicle segment from the A-Class to S-Class with EQ models thanks to a scalable steel/aluminium/carbon fibre architecture that can be varied in both wheelbase and width.

BMW established its electric-focused sub-brand – i – back in 2011, with the i3 EV launched two years later (though also with a range-extender variant supported by a two-cylinder petrol engine). This year an updated version was released with an extra, higher-energy variant capable of almost doubling the regular i3 EV’s range to 390km.

The company has since broadened the i division’s remit to include other technologies including autonomous driving, and there were reputable reports around the Paris show that BMW executives were holding crunch talks about its EV strategy. The pro-electric camp clearly won the debate, though, as BMW recently confirmed there would be electric versions of the Mini (2019) and X3 (2020). There will also be another i-badged model, a mid-sizer expected to be called i5 or i6 and set to be positioned as Munich’s autonomous-car leader.

It’s no coincidence luxury car makers are mostly leading the way, hitherto dabbling only with the halfway-house hybrids. While there’s an obvious need to continue advances in efficiency to meet ever-stricter emissions regulations and penalties, the T-word has been a grumblingly acknowledged success story across boardroom tables.

Tesla has achieved a level of near-fanaticism, and certainly a public perception, that usually requires decades of heritage and billions of marketing dollars. It’s hard to believe the start-up’s first entirely in-house creation, the Model S, was launched only four years ago.

It has recently followed that with the Tesla Model X SUV, and in late 2017 its most serious play for volume sales comes in the form of the Model 3 compact car that will cost from about $60K – half the price of the cheapest Model S. That would account for about a fifth of the global EV sales estimated for 2025 by global industry analyst IHS Automotive. (Goldman Sachs estimates it will be mostly hybrids that establish a 25 per cent market share for electrified vehicles by 2025.)

It suggests either the forecast is too pessimistic or manufacturers are overly optimistic, though car makers employ their own crystal-ball-gazers to ensure they don’t invest billions on a product no-one will buy.

It certainly seems the next five years will be the turning point for EVs, as the new wave coming on line are all equipped with the potential to overcome at least two of the three key negatives that have traditionally hindered EV sales: high price tags, range anxiety and long recharging times.

The likes of the VW ID and Tesla Model 3 will be particularly affordable, and government incentives would be expected to continue where they’ve helped EV sales in markets such as Europe, California, the UK, and China, the world’s largest car market.

And if charging networks continue to expand slowly, charging times are shrinking rapidly.

Porsche says 80 per cent of the Mission E’s battery will be able to be recharged in 15 minutes, and Mercedes is claiming as little as five minutes for a 100km boost from its fastest-charging system. The disclaimer is that these charging capabilities will require correspondingly powerful outlets that won’t come cheap.

With the Turnbull government proving to be less progressive than initially promised, subsidies aren’t likely to help Australian buyers any time soon.

It hasn’t helped a local scenario where the Mitsubishi i-MiEV and Holden Volt have been and gone, and the remaining battery cars – the i3 and Nissan Leaf – have both slumped in 2016 for combined sales of 119 units to the end of October.

Can things change? Let us switch back onto this in 2020.