Rather than stabbing a Botox shot into one of its five doors as a birthday present to itself, the Volkswagen Golf GTI 40 Years has instead hit the gym hard.

There’s icing on the four decades-of-GTI cake, too. The 2.0-litre’s larger turbo and increased charge pressure not only delivers 195kW between 5350rpm and 6600rpm, and (an unchanged) 350Nm between 1700rpm and 5600rpm, but 213kW/380Nm becomes available for 10 seconds in third gear and above three-quarter throttle. 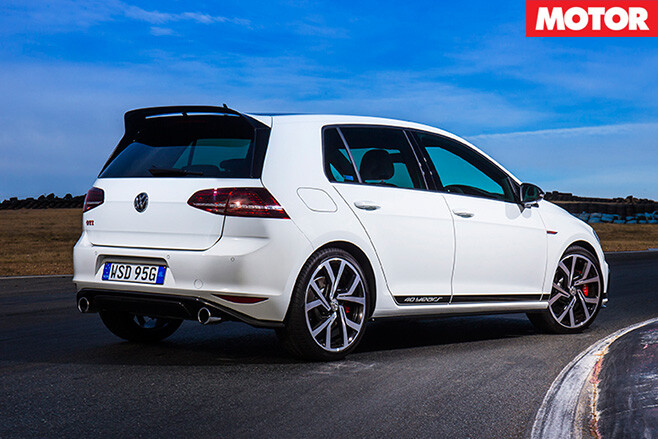 Torque then matches the 78kg-heavier all-paw VW Golf R, which costs $4850 more than Golf GTI 40 Years, while power exceeds it by 7kW. The 6.3sec 0-100km/h may only be a tenth faster than a Performance, but Volkswagen Australia quietly admits that for rolling response the Golf GTI 40 Years may just take an R (which claims 5.0sec 0-100km/h).

That’s how it feels. The EA888 four-cylinder has discovered newfound thrust to replace the regular GTI’s linearity, from about 5000rpm tearing the tachometer needle towards its top end. The new sports exhaust delivers subtle pops and crackles on overrun, injecting the Golf with greater character to match its more aggressive exterior (gloss black front gills, spoiler, mirror caps and in other than grey paint, a black roof with the remaining white or red hues).

Unchanged are brakes and tyre size (225mm-wide, 19-inch) but ‘Ruby’ alloys, Pirelli P Zero rubber and an ESC Sport mode (or ESC Off) are all Golf GTI 40 Years exclusives.

With hands wrapped around the new Alcantara-clad tiller – with 12 o’clock marker – there’s the same creamily smooth and quick variable-ratio steering as in a regular GTI, and the same superb damping particularly in Normal and Sport modes (Comfort’s a tad boaty).

That extra powertrain aggression tests the front-drive-plus-LSD configuration of this gruntiest-ever GTI. This isn’t like the R, which offers sheer traction everywhere.

Knowing how to work the front diff – with late and hard braking into corners, or a trailing brake that delicately shifts weight to the outside rear wheel – and when to instead adjust a cornering line on then off the throttle is crucial. 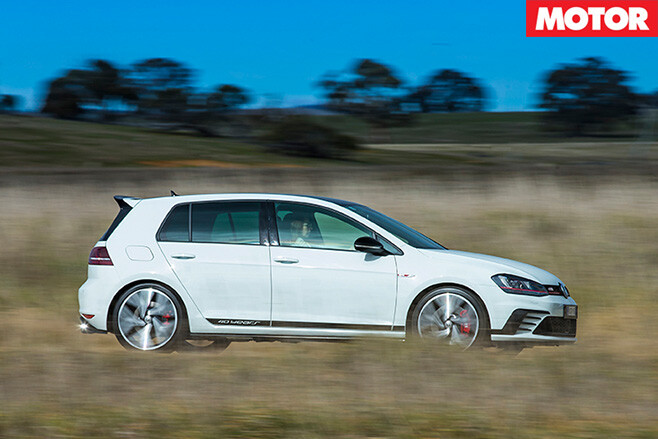 Unlike the heavier R, the Golf GTI 40 Years feels light and zesty on its toes; less hammer and more blade. There’s greater chance of getting daring cornering exploits wrong, but shifting between each contact patch is absolutely half the fun and there’s arguably sweeter reward when getting it right.

We tested only the DSG, which is damned impressive these days, but the manuals will likely be the bargain and the sweet spot. Sadly they’re all but sold out, though Volkswagen Australia has promised us a drive. 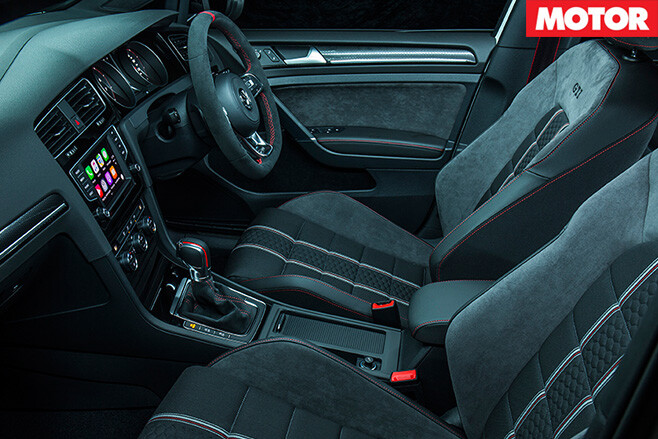 The Golf GTI 40 Years is not a giant killer like the R, new Focus RS or even the Renault Megane RS275 Trophy. But at sub-$50K for a five-door hatch with semi-luxurious kit and comfort teamed with genuine speed and extra aggression, it’s unashamedly its own thing and a fine nod (or lift of the dumbbells) to four decades of Wolfsburg’s GTI.