WHAT IS IT?
Two-door four-seater addition to Audi’s growing ‘B9’ generation of mid-sizers. It’s built on the same MLB Evo platform as new A4 sedan, Avant and Allroad quattro.

WHY WE’RE TESTING IT
It’s almost ready for launch in Europe, but Australia will have to wait until next year for the Audi A5/S5 Coupe. The international launch in Portugal provided our first chance to find out if has more going for it than those looks.

MAIN RIVALS
The BMW 4 Series Coupe and Mercedes-Benz C-Class Coupe ranges provide the obvious competitors for the regular A5 Coupe line-up. Most obvious rival for the S5 Coupe is the turbo 3.0-litre, six-cylinder powered BMW 435i. 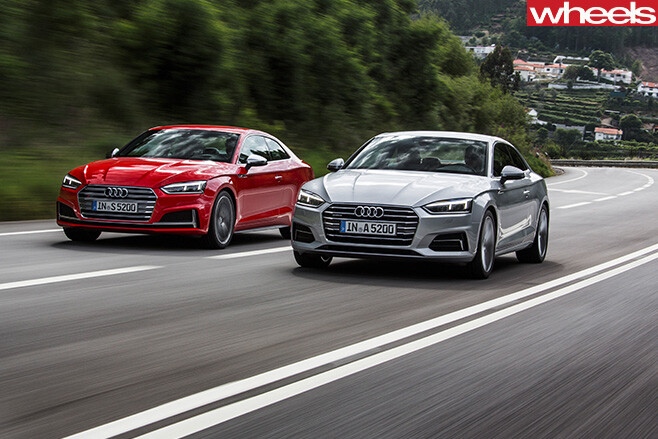 THE WHEELS VERDICT
Meet the best looking member of Audi’s growing ‘B9’ model generation. Built on the same MLB Evo platform as Audi A4 (and Audi Q7), the A5/S5 Coupe also drives better than the average Audi. The lowered suspension of A5 Coupe impacts on ride quality though.

THE WHEELS REVIEW
Frequently – and justly – Audi is praised for the precision and beauty of its interiors. Now, with the new A5/S5 Coupe, hymns to Ingolstadt’s mastery of metal will need to be composed. To run a finger along the join between the four-seater’s clamshell bonnet and its front guards is to encounter pressed perfection. 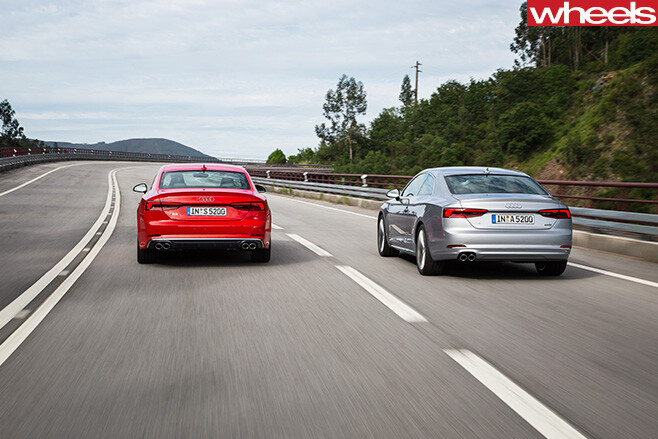 The curving gap never varies, all the way from the uppermost outer corner of headlight to the door shutline at the base of its A-pillar. From some angles the gap is invisible, seeming to merge seamlessly into the distinctive wave-shaped shoulder line that runs the length of the car and creating, from some angles, the illusion that the Audi’s power-bulged bonnet and sculpted guards are all of a piece.

Yet this is just one detail – perhaps the most outstanding – to be savoured. This coupe is a real looker. Compared with the visually bland A4 sedan and Avant wagon (very close under-the-skin relatives), the coupe is a richly detailed and lusciously proportioned feast for the eyes. It is surely one of the best looking shapes to emerge from Audi’s design studios in recent times. While the A5/S5 Coupe will appear in European showrooms later this year, Australians will have to wait until sometime in the first half of 2017 for its arrival.

With the local launch so far off, Audi Australia has not yet finalised its A5/S5 Coupe line-up. A spokesman said the company is aiming for prices similar to current models, although there will be some adjustments to the line-up.

It’s likely the slow-selling 2.0 TDI turbo diesel variant will be dropped and that a 140kW front-drive 2.0 TFSI will be the least expensive model in the range. While there will be a 3.0 TDI quattro, the choice between 160kW and 210kW versions of the turbo diesel V6 is yet to be made. 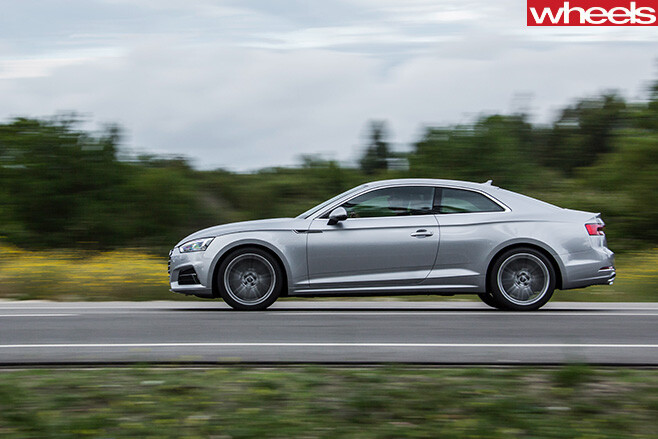 The S5 Coupe, equipped with the same 260kW turbo V6, eight-speed auto and all-quattro drivetrain as the S4 sedan and Avant, will top the Australian line-up at launch. A much more affordable 185kW 2.0 TFSI quattro is a near certainty. As in the A4, this turbocharged petrol four and seven-speed double-clutch auto drivetrain is likely to be the sweet spot in the range. Wheels sampled both models at the international launch in northern Portugal.

While the new A5/S5 Coupe’s external dimensions are very close to the previous generation, there’s a little more room inside the two-door. While the slight increases in cabin length and shoulder room are welcome, rear-seat headroom in the Coupe remains tight. Anyone taller than, say, 180cm will find the Coupe’s rear seat headroom insufficient. 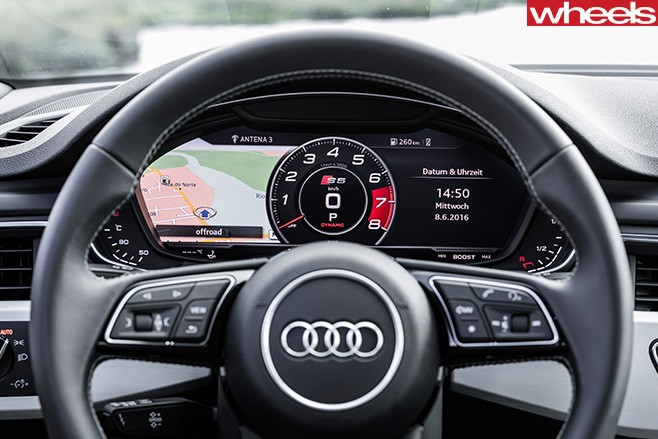 The instrument panel and centre console are straight from the A4, which isn’t any kind of a shortcoming. Especially when optioned with Audi’s superb Virtual Cockpit instrument display – as all the test cars in Portugal were – this is a profoundly impressive interior environment.

For looks, the A5 Coupe rides lower and stiffer than the new A4 sedan and Avant built on the same MLB Evo platform. The ride of the A5 Coupe 2.0 TFSI quattro was noticeably stiffer. While it was acceptable on Portuguese roads, it may prove a shade too brusque on Australia’s often second-rate blacktop. The four-cylinder turbo was also louder than I remembered from the A4. There was a gruff but not unpleasant exhaust growl to add an appropriate touch of aural excitement to driving the A5 Coupe. Not that the 185kW engine’s actual performance is dull. This turbo four doesn’t lack for torque, and revs out willingly enough. Although the standard S-tronic seven-speed double-clutch made the occasional thumpy shift, the car’s handling was fine; grippy and nicely balanced.

Strangely, the supposedly sportier S5 Coupe had a more rounded ride than the A5 Coupe 2.0 TFSI quattro. With 260kW on tap, acceleration is in a different league. Audi’s new turbo 3.0-litre V6 is a refined and torque-rich propulsion unit. And the car’s chassis has the quattro-enhanced grip and handling finesse to make the most of it. With dynamics and performance to go with those looks, the S5 Coupe is undoubtedly destined to become the most desirable version of Audi’s lovely new two-door.

New A5/S5 Coupe’s standard equipment will be better than the current car. Audi has made a number of across-the-board upgrades that go into everything rolling off the Ingolstadt production line. These include front seatbelt feeder mechanisms, Audi’s Drive Select system, LED rear lights and Xenon headlights (with different grades of LED headlights either standard or optional, depending on model)