Bentley turns its luxury grand tourer up to eleven.

THEY say that nothing succeeds like excess, but even the great W.O. Bentley, founder of the storied British luxury marque and a man not known for his willingness to die wondering, would be proud of what the crew from Crewe have conjured this time around.

Building on the potent platform laid down by the 2009 Continental Supersports and more recently with the Continental GT Speed, Bentley has turned the dial up to 11 in reviving the Supersports moniker in a car it’s heralding as “the fastest and most powerful luxury four-seat car in the world”.

Those in the know would reckon Ferrari might have something to say about that, but a check of the specs reveals that the new Continental Supersports’ eye-watering 336km/h top speed edges Maranello’s GTC4Lusso by a single kilometre an hour. 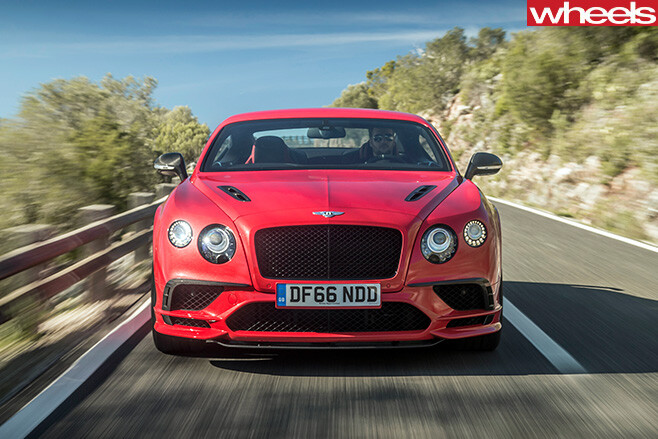 At the launch this week of the Supersports in Portugal, the car’s engineering program director and Bentley board member, Paul Jones, practically gloated about his team’s success in creating not just a Ferrari beater, but also the most hardcore production car the marque has ever created.

Drawing a strong line between the company’s motorsport efforts, the latter recently witnessed at the Bathurst 12 Hour where the Continental GT3 of Smith/Kane/Oliver took an impressive third place, Jones described the Bentley Continental Supersports as “the most dynamic Bentley ever to take to the road”.

And powerful. Jones pointed to the latest iteration of Bentley’s venerable twin-turbo W12 engine and its remarkable outputs of 522kW and 1017Nm. Those numbers are enough to overcome the coupe’s hefty 2280kg kerb weight to rocket it from 0-100km/h in just 3.5 seconds, on its way to its much-hyped top speed. 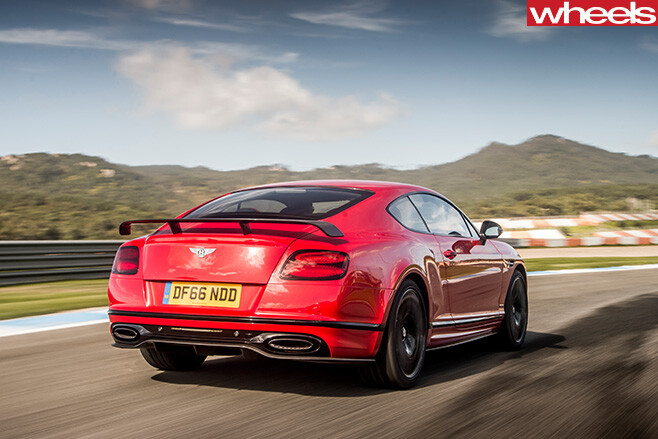 The extra mumbo comes courtesy of painstaking development work on the W12’s intake side, adoption of new higher-capacity turbochargers running 0.5 bar of extra boost, and a revised charge-air, or intercooling, system.  The engine also gains beefed up internals, including the crank, main and conrod bearings, and significant remapping work.

Sitting behind the W12, the eight-speed ZF transmission also came in for engineering attention, adopting a  new torque converter that’s softer initially to allow the turbos to spool up, but which then locks up faster and across a wider rev range to allow the car to make best use of its huge torque, thus enabling even more rapid acceleration.

Of course, making power is one thing but getting something this big and heavy to stop and go around corners is quite another. Here Jones and his team looked to those old staples of targeted weight reduction mixed with some new tech to aid the cause. 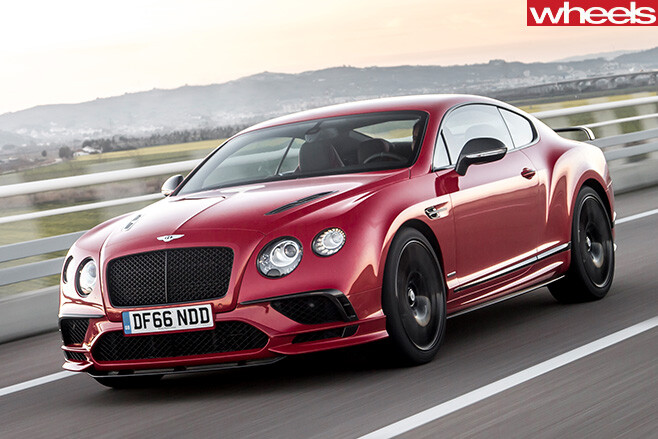 About 40kg has been stripped out of the Supersports when compared with the GT Speed, which isn’t huge but is significant when you realise that about 25kg of that is unsprung mass, which has obvious benefits for dynamic response through corners.

Tucked in behind the lightweight 21-inch forged alloys and charged with hauling up the hard-charging behemoth are massive carbon ceramic brakes, which Bentley reckons are the largest on a current model production car. Measuring 420mm x 40mm up front and 356mm x 28mm at rear, and with eight and two pot calipers respectively, the platter-sized stoppers can apparently handle temperatures up to 1000 degrees Celsius – the same temperature as lava. None of this is any use if the traction control system is all over you like a wet nanny state, so Bentley has also recalibrated the electronic stability control system to make it less intrusive and allow enthusiast drivers to extract maximum agility and performance from the car.

The combination of massive horsepower, reduced unsprung weight, torque vectoring, and the Continental’s standard 60:40 rear-biased permanent all-wheel-drive system give the Supersports a surprising degree of agility and balance. However, as we discovered over the course of several hot laps at Portugal’s famed Estoril circuit, the Supersports is no track-day racer. It’s simply too big and heavy to be precise enough on what is a particularly challenging track.

To be fair, Paul Jones and the rest of the Bentley team were at pains to point out the car is not a track car, and that we were unleashed on the track only to explore its outright performance potential. Of which there is plenty. At full throttle down the main straight the guttural roar of the Supersports’ W12 sounds like an enraged bull elephant, the speedo nudging 240km/h before those vast carbon ceramics are forced to earn their keep. In these conditions you have to respect the sheer weight of the car and the prodigious speed it’s carrying, washing off velocity and settling the car before getting back on the loud pedal, at which point the immense punch of the reinvigorated W12 comes firmly back into perspective.

As rapid as it is on the racetrack it’s out on freeways and more open backroads that the Supersports really shines. No-one understands the Grand Tourer ethos better than Bentley, and the Supersports is the consummate GT.

As Paul Jones put it, it’s the sort of car you could drive for 600 miles at high speed, and then get out of feeling refreshed.  While we didn’t quite manage 600 miles, we did cover plenty of kays at a fair clip and the car’s unique blend of craftsmanship and epic performance really do set it apart.

All cars in the test fleet came equipped with the optional titanium exhaust system, which adds its distinct resonance to the extroverted rifle-shot pops and cracks on downshifts and deceleration. The note is enjoyable enough in the coupe, but if you really want the full “help, I’m being chased by Al Capone experience”, best opt for the convertible.

On tighter backroads, of which there are plenty in Portugal, you’re very much aware of the car’s physical presence. At 4.8m long, 2.2m wide and weighing almost 2.3 tonnes, the Supersports commands a bit of road. But it’s precisely this imposing heft, coupled with its generous 2746mm wheelbase and that unbelievably flat torque plateau that give the Supersports such rock-solid stability at high speed.

Rocketing along the autostradas outside Lisbon, the big Bentley felt utterly unfazed at numbers that would see you locked up for life back home, yet it still has massive pace in reserve, should you feel game.