THERE are many noises you expect to hear while powering a V12 Ferrari up a tight rural road, but the crack of a gunshot isn’t one of them.

Watching in disbelief as a farmer, his face mottled and purple with rage, takes stock after charging down his driveway and unloads two more shots – crack, crack – across my bow is equally high on my ‘unexpected’ list.

The gun-toting farmer finishes his performance by slowly and deliberately drawing his thumb across his veiny throat. I glean from this that he mustn’t like Ferraris.

Having arrested my attention, what follows is something of a standoff: the farmer poised at his fence line, his chest heaving and trigger finger quivering, while I sit in the Ferrari, my hands gripping the wheel tighter than normal, wondering what I’ve done to upset him.

My puzzlement is genuine; we’d been using this stretch of empty rural road for photography and I had driven past his house twice, but I wasn’t speeding. I wasn’t hooning, or sliding – though Ferrari’s latest version of Side Slip Control did make the latter tempting. 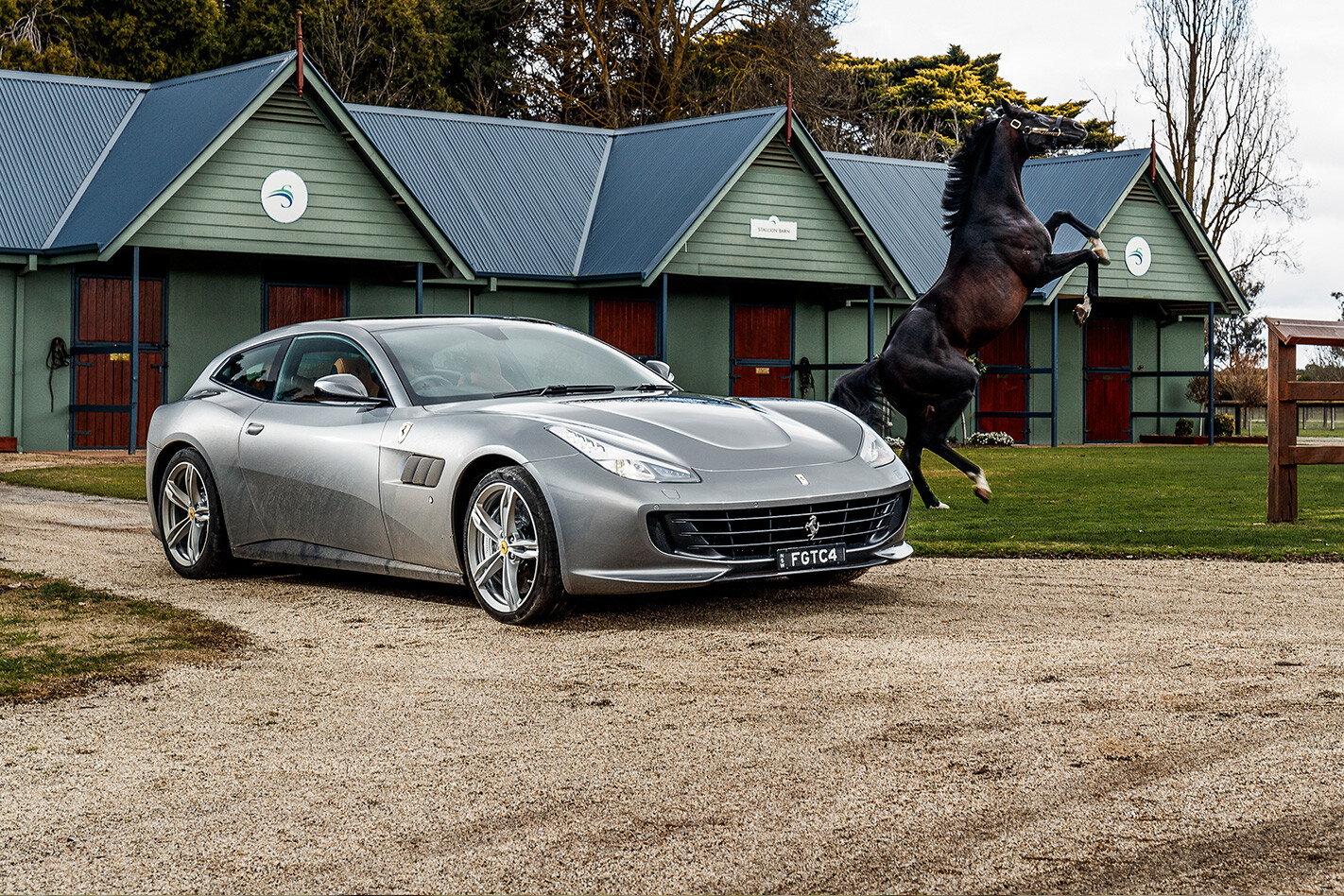 Then I consider that of all the Ferraris I could be driving, this is the one that can be enjoyed by the most people. It’s the new FF – now known as the GTC4Lusso – which means it’s the only Ferrari with four seats. Well, at least until the inevitable SUV arrives. I briefly consider asking the farmer if he wants to test the rear pews, as a peace offering, and wonder if his rifle will fit in the boot (it can swallow 800 litres and the rear seats split 50:50, so it’s a fairly safe bet) but the slightly mad gleam to his wide-eyed stare suggests this isn’t a good idea.

Eventually the impasse is broken when another car appears, the farmer turns on his heel and I drive away slowly, my eyes nervously glued to the rear-view mirror.

“What a shame,” I think to myself. “He totally missed the point.”

Ferrari will tell you the GTC4Lusso is ‘all-new’, but in reality, it’s a facelift. The same basic recipe from the FF remains: big naturally aspirated V12 up front, plenty of room for four in the middle, and enough load-lugging ability and versatility to satisfy even heavy packers out back. 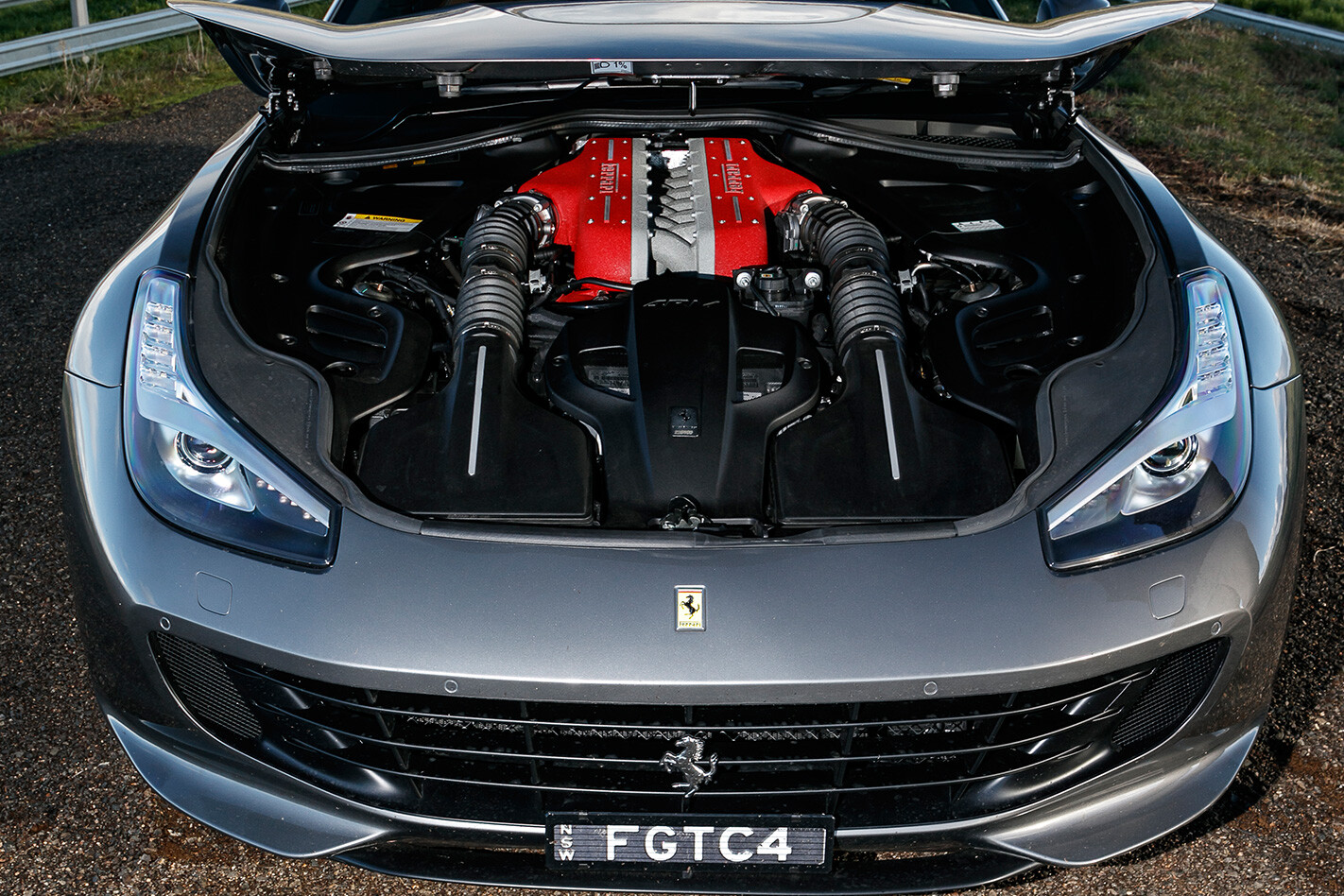 Where Ferrari has succeeded with the Lusso is in refining the formula. It’s now a more handsome and cohesive car, with styling changes headlined by new strakes behind the front wheelarches, a sleeker profile (happily the iconic breadvan shape remains) and a revised twin tail-light design that sits above what could be the world’s largest rear diffuser.

Inside, the cabin has been totally redesigned, and now boasts an eye-catching 10.2-inch infotainment screen and a new steering wheel with a smaller centre boss and revised switchgear. It’s a special place to sit; the leather seats waxy and supportive, the fit and finish exemplary, and the quality of materials top shelf.

The mechanical changes appear more subtle, at least on paper, yet like the rest of the Lusso’s tweaks they coalesce to produce a package that’s markedly more aggressive. A new piston design, multi-spark injection and a higher 13.5:1 compression ratio has seen outputs from the 6.3-litre V12 climb to 507kW/697Nm and the redline rise to a lofty 8250rpm. Mercifully, this remains a turbo-free zone.

Most of the grunt is sent to the rear wheels via a seven-speed dual-clutch ’box, but as in the FF, the Lusso uses Ferrari’s unique take on four-wheel drive. Dubbed 4RM EVO, the system has no mechanical link between the front and rear axles, and instead uses a power transfer unit to take drive directly from the crank, which is then split between the front wheels by a pair of clutches.

The big news, however, is the addition of four-wheel steering to improve high-speed agility and importantly, low-speed manoeuvrability, which is handy in a low-slung sportscar that’s almost as long as an S-Class (overall length is 4922mm).

Yet despite the new tech, this remains a car dominated by its engine. In this age of forced induction it’s easy to forget just how special a big-capacity, free-breathing unit can be at full noise and Ferrari’s 6.3-litre V12 is a triumph. 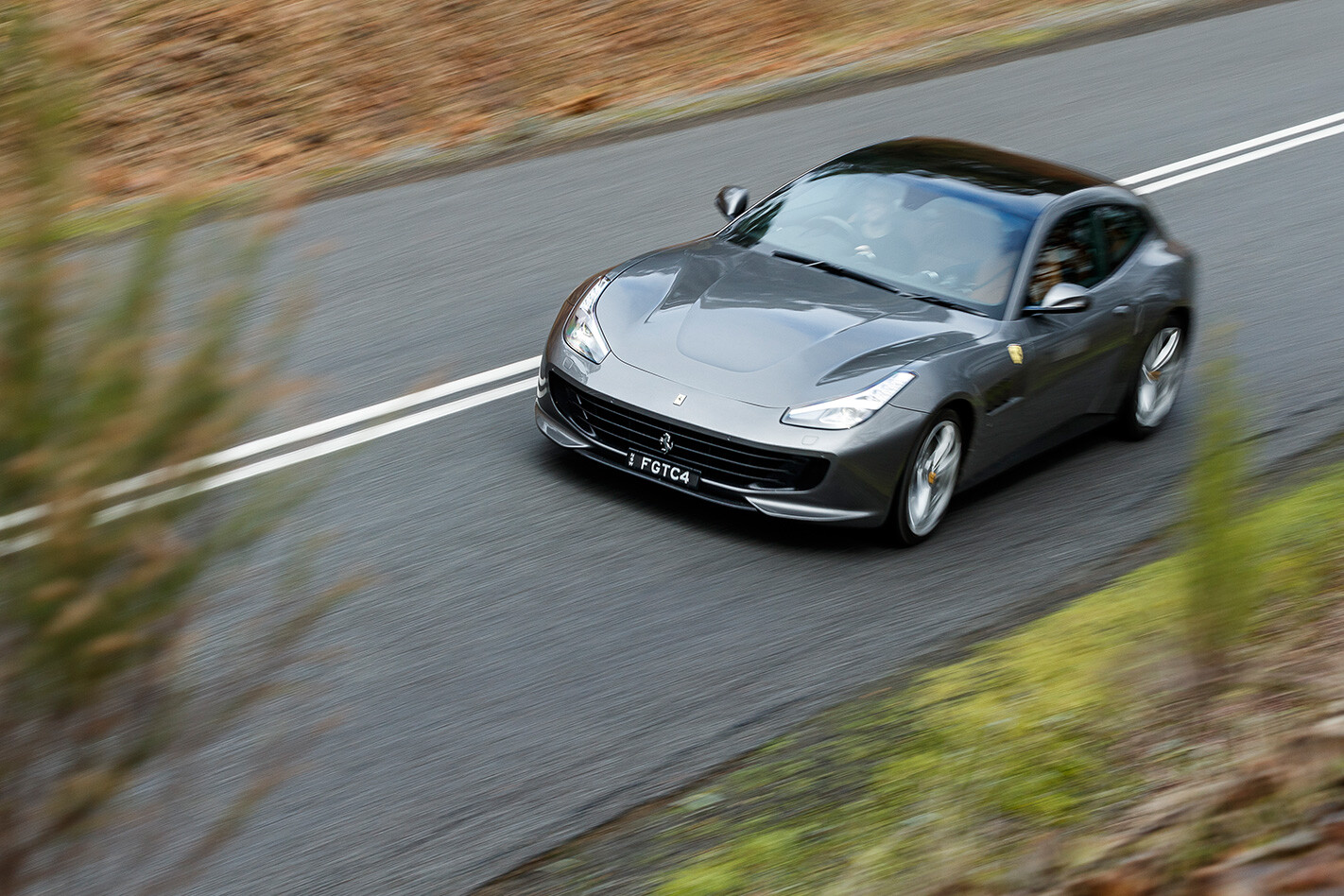 With no turbos to rely on, it can feel fractionally torque-light low in the rev range (despite Ferrari’s dyno claiming that 80 percent of torque is available from 1750rpm) but what you lose in instant pulling power you get back with interest as the tacho crests 4000rpm.

Ferrari claims 0-100km/h in 3.4sec (three tenths quicker than FF) and on bumpy Aussie roads, it feels every bit that fast, the sensation of speed enhanced by the scream of 12 cylinders working at fever pitch.

It’s the noise, I’m sure, that drove the farmer batty. Ferrari has tuned the exhaust to be quieter on start up (the FF was an anti-social old thing), but with the baffles wide open, the Lusso emits an operatic howl that can be heard for miles.

There’s plenty of handling nous to back up it up too, despite the Lusso’s GT positioning. Admittedly, throw it at a slew of tightly stacked hairpins and you’re reminded this is a big, heavy car (kerb weight is 1920kg), but through high-speed sweepers on open, flowing roads, the Lusso is in its element. There’s plenty of bite from the Pirelli P Zeros (245/35R20 front and 295/35R20 rear), the nose points accurately and the rear provides that reassuring breath of bodyroll as the weight shifts to the outside tyre. 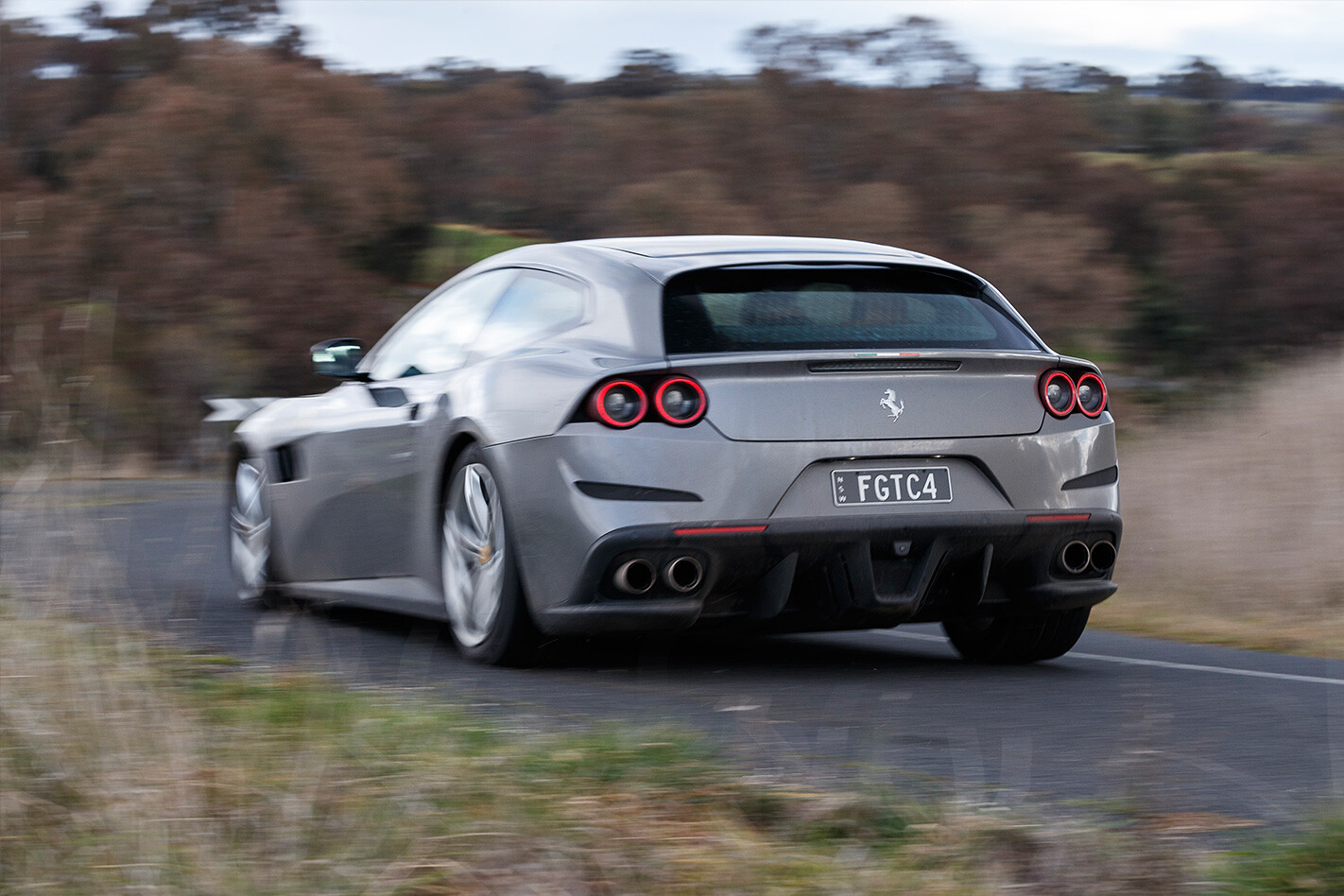 Can you feel the four-wheel steering working to effectively shorten or lengthen the 2990mm wheelbase? Not really, but the Lusso does feel balanced and when the road gets twistier, surprisingly nimble and wieldy.

It will oversteer, and on wet roads, heavy-handed use of the throttle results in unsettling armfuls of opposite lock with Sport mode engaged on the manettino, but despite its prodigious speed, the Lusso lacks the adjustability and agility that defines Maranello’s best. Another niggle is occasional tramlining as the front rubber chases the camber and surface irregularities on some roads.

Where the Lusso stands alone, however, is when it comes to cross-country comfort. A well-controlled ride with decent wheel travel and a degree of bodyroll, plus improved NVH and reduced suspension noise, combine to make it a sublime long-distance tourer. 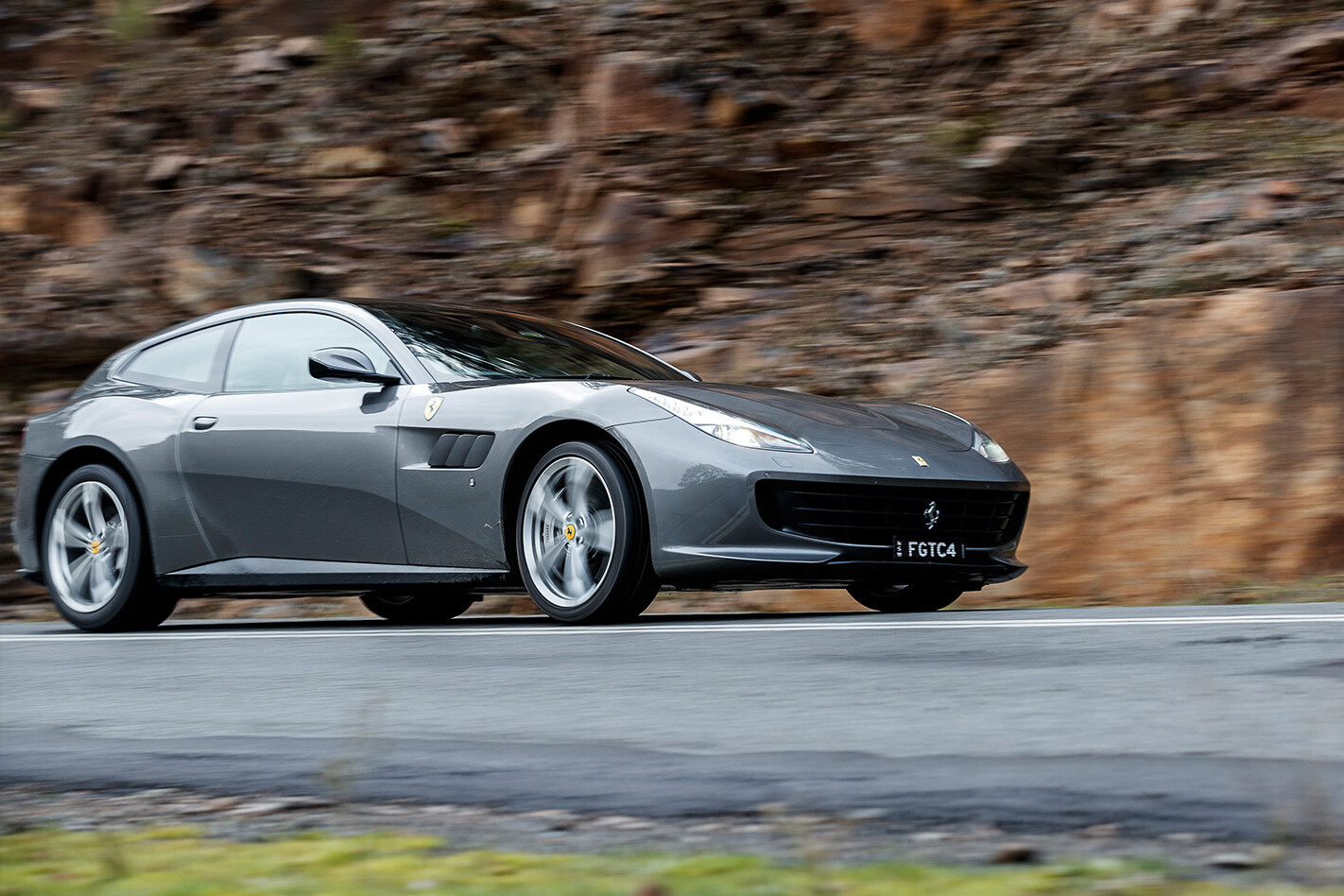 It leaves me pondering the realisation that the Lusso has no real rivals.

I can think of nothing that is capable of lugging four adults great distances which is this effective, this engaging or this exciting when driven hard.

It feels special, sophisticated, exotic and delivers a notable step forward over the FF.

Why Ferrari feels the need to build an SUV when the Lusso so effortlessly blends high-octane thrills with luxurious practicality is beyond me.