I mean, won’t that name always be remembered as the car that drove the wedge between Holden and P Brock? Whatever, when you look at the latter-day Director as part of the final Commodore special models thing, it becomes clear that this is a pretty special thing.

Based on a Calais V, the Director gets the SS’ 6.2-litre, 304kW V8 and the six-speed automatic gearbox. Beyond that, it’s mechanically very similar to the other Special Editions sedan, the Motorsport Edition, and that is very good news. Because it means the Director also gets the two-piece, cross-drilled front rotors that reduce unsprung weight at the front and give those Brembos something even beefier to bite into.

The Director also cops the Magnetic Ride Control gear that gives it selectable drive modes, all of which are a bit more purposeful than the standard Calais settings. Like the Motorsport, the drive modes also control the amount of throttle sensitivity, steering assistance and the bimodal flap in the exhaust. Also, like the Motorsport, the Director gets the driveline cooling package lifted from the Stateside-spec Camaro ZL-1

Externally, you’ll pick the Director by its slightly more subtle presentation compared with the Motorsport, although the Director does pick up the SS’ bonnet vents and gets a thin, strip spoiler for the bootlid. Unlike the Motorsport there’s no fully-sick wing option but the Director does get 20-inch alloys, the black roof and a few interior tweaks like specific front seats and paddle-shifters (‘cos all Directors are autos).

If you can pick a dynamic difference between the Motorsport and Director, you’re a better man than I, and Holden admits that the one real difference, that revised rear-cradle bush in the Motorsport, will only make its presence felt in a situation where you’re probably already about to crash anyway. 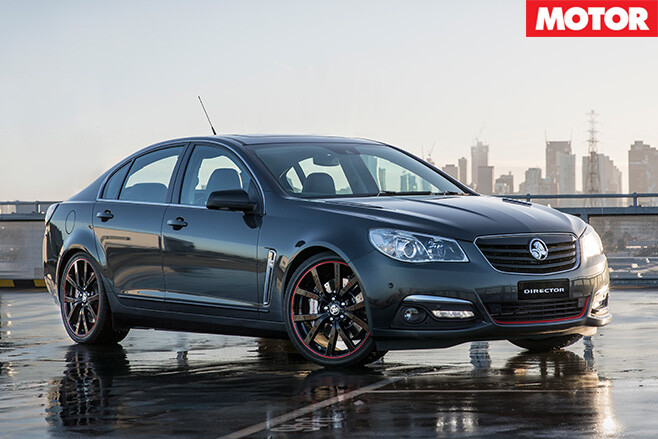 But that doesn’t mean the Director isn’t heaps of fun, because it is and it remains one of the few track-ready Commodores ever made. And at $63,990, Holden might just find the 360 units it has planned for production might not be enough.