Anyone who feared that Honda might lose its way and allow its obsession with high-technology to steal the driving thunder of the all-new NSX can take a deep breath and relax.

The new petrol-electric hybrid NSX is undoubtedly a technological marvel, but it’s also a true driver’s car. It’s capable of churning your guts into soup with the visceral thrust of its ferocious launch mode and straining your neck muscles with the lateral G of cornering forces generated by a superbly balanced chassis.

Over a session of nine laps in the four drive modes of the twin-turbocharged V6 hybrid supercar, we can confirm that Honda is well on the way back to rediscovering its fabled mojo. Yes, there are still a lot of dreary cardigan cars desperately in need of an injection of talent across the marque’s Australian range, but the NSX is staggeringly good and one giant step in the right direction for a brand that we know can, and should, do better.

Truth be told the new NSX is actually several cars in one: from the quiet, green creep of its all-but silent pure electric mode, through to the fully-unhinged and linear ferocity of its ballistic launch control, it’s a car with a depth of talent and a breadth of capability that a single day at the wheel could not possibly hope to fully explore.

But we did our best and came away from the track session amazed at the ease with which the 1780kg supercar can be flung around a circuit, at its impeccable balance and at the sheer technological smarts of seamlessly integrating a trio of electric motors with a twin turbocharged V6 and a bespoke nine-speed twin-clutch transmission. Honda calls the NSX a hyper-car for supercar money and, despite evident scepticism from assembled media at the very idea of a $420,000 Honda that tips the scales at 1780kg, by the end of the track session it was clear that most, including this scribe, were reconsidering their position.

The trio of electric motors and attendant lithium-ion battery pack accounts for fully 160kg of that weight. It’s only due to the extensive use of aluminium, carbon-fibre and exotic steel in the car’s structure that weight didn’t blow out further.

Obviously wary of the weight and attendant criticisms, Honda executives claimed that out on the road or track, the NSX doesn’t ‘feel’ anywhere near that heavy. Turns out they were right. The dramatically styled mid-engine-coupe seemingly defies physics by managing to accelerate, stop, turn and change direction in a manner that renders any on-paper speculation about weight as a non-issue. While early prototypes of the NSX featured both a transversely mounted atmo V6 and a front mid-mounted V10, the eventual powertrain is an unusual 75-degree 3.5-litre DOHC mid-mounted V6, fed by a pair of single-scroll Mitsubishi Heavy Industry turbos.

Designed by Honda Japan, assembled by Honda USA and featuring a block and heads manufactured by Cosworth in the UK, the dry-sump V6 was engineered specifically for the NSX and features electronic wastegate actuators, both direct and port injection, a high 10.0:1 compression ratio and a 7500rpm redline.

It’s a serious bit of kit, to be sure, but it’s not the only player in the NSX’s star-studded drivetrain show. An electric motor directly coupled to the V6’s crank provides instantaneous torque in every gear, ensuring that while the V6 is revving and the turbos are spooling up, there is already a shot of instant torque available for instant acceleration. 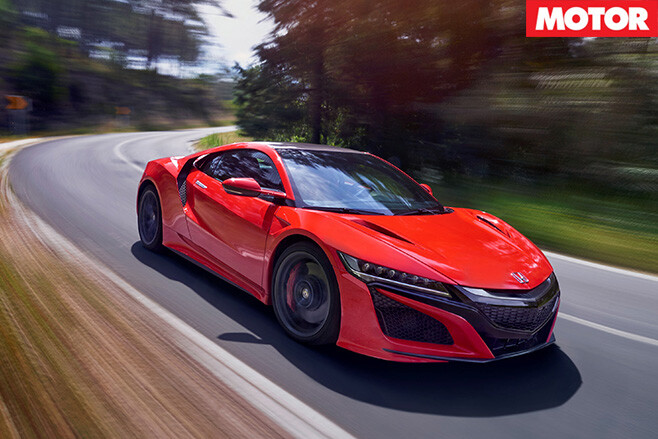 Meanwhile, up front, the NSX packs a pair of electric motors that not only provide further independent drive, but torque vectoring technology that takes the NSX’s handling to another level.

Honda’s so-called Super Handling All-Wheel Drive, or SH-AWD technology has been seen before on Honda’s Legend luxury sedan, but the NSX takes the tech from the rear to the front axle, where it splits engine torque left to right to create yaw moment when turning.

Because it’s electrically driven, the NSX’s direct yaw control works when the driver is on or off the throttle, helping trace tighter cornering lines and enabling earlier throttle applications. 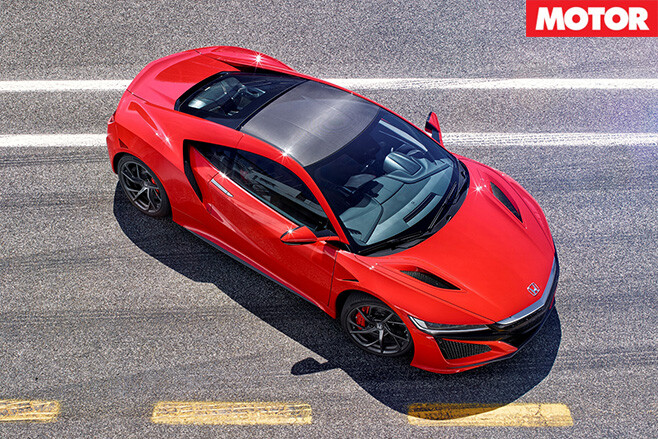 If that all sounds a bit sci-fi, take our word for it: it works brilliantly. As does the NSX’s nine-speed dual clutch transmission, benchmarked in development with Porsche’s impressive PDK.

Whether it’s quite as good as the Porsche system remains to be seen, but the Honda ’box is undeniably brilliant, delivering lighting fast and incredibly intuitive shifts up or down the ratios and effectively rendering the paddle-shift actuated manual mode redundant.

Drop the hammer at any speed, in any gear and in any one of the four available drive modes and the sleek supercar responds with instant urge, its rapid-fire reflexes permitting absurdly optimistic open road overtaking manoeuvres. The combination of a smooth and blindingly quick automated manual gearbox, with a drivetrain that marries instant electric thrust to an already muscular twin turbo V6, powerful carbon-ceramic braking and a sophisticated torque vectoring system on the front axle delivers a driving experience that is almost other-worldly.

This is a supercar that harnesses technology in a way that flatters the average driver, yet has a level of depth to it that will tempt and enthral even the most capable of steerers.

Of course, there’s much more to talk about with a car that can genuinely be described as a technological tour de force, but that can wait for our full first drive review. For now, take it as read that Honda is back and that the new NSX honours the legacy of the original by once again boldly throwing down the gauntlet to the supercar establishment.